The fouth response from the 100 letters I mailed out was from one Ulysses Stockdale. Ulysses’s letter appeared in issue 26 entitled: Funeral For A Friend. 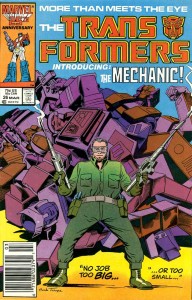 Ulysses responded to my letter for an interview by calling me up. It was truly a lot of fun to talk with him. After I asked my interview questions Ulysses had several of his own and was pleased to learn of the recent Transformers: The Movie blue-ray release.

“Dear Transmissions,
I have just read TRANSFORMERS THE MOVIE, and I very much want to congratulate you for doing a very superb job on this movie. The plot was great, I love every minute of it. But there is something I need to have answered. I was very saddened to see Ironhide’s death along with the other Autobots on the ship, as well as Optimus Prime’s death. What I want to know is will Optimus and the other Autobots ever be brought back to life by the Creation Matrix, or by something else? they survived ten millions years, so couldn’t they live another million? O hate to see Optimus go, he is my favorite Autobot. Please don’t get me wrong about this, but we both know that no Autobot, not even Rodimus Prime could ever be as wise and as strong as the great Optimus Prime. I would very much like to see a sequel to these movie (even if it does kill you) because only you guys can do it the best. Buy the way, keep up the good work on the TRANSFORMERS comic books, the artwork is great.
Ulysses Stockdale
Heiskell, TN”

Now, 30ish years later we get to hear from Ulysses again.

Anywhere I could score them. My parents where not exactly fond of me buying comic books in general. They thought I could use my time much more wisely. I was a kid and that kind of stuff…. You gotta let a kid be a kid. That kind of stuff is a gold mine for a kid.

I found my comic books at 7-11’s or gas stations. Anywhere that they had a comic book rack. I collected them out of order. Whatever I could find I would buy and fill in the gaps later.

Youseph: What compelled you to write to to Marvel’s Transformers?

Primarily it was the movie. I’d never seen such a well done animated movie. I really really enjoyed the movie and of course my love for the Transformers. I was heart broken that Optimus was killed off in that movie. And of course the next thing I did, I had to have a movie adaptation of the comic book so I went out and found those. The movie was primarily what prompted me to write.

It had to be pointed out to me that I was even in the letters section. As a kid, it was like hitting the lottery. Not that I got anything from it, but wow, My name is out there. My letter is out their, in print now. It was really cool as a kid, but as I look back on it, it was a bit humbling that someone would take the time to respond to me.

A happily married man with a wife who understand I’m still a kid at heart and has no problem with my fascination with transformers. Yeah, I still love transformers. I have all the blue rays for the most recent movies.

I really have to thank Ulysses for his phone call and his time. I had a lot of fun chatting with him. He still has my number, so who knows. Maybe I’ll hear from him again down the road.