The Third response from the 100 letters I mailed out was from one Tori Bergquist. Tori’s letter appeared in issue 37. Among other things Tori complimented my favorite story line, ‘Man of Iron’. 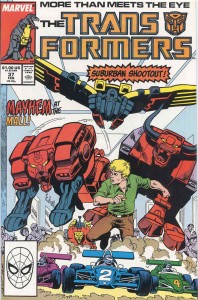 “I received your letter from my folks, who still live on their ranch in Arizona.” Tori wrote. “Actually, until you mentioned it I had completely forgotten ever writing to the Marvel Transformers comic (or getting published) so this brings back some ancient and buried memories.”

Congratulations, Mr. Parkhouse on an excellent story! The British have come and “Man of Iron” was worth the interruption on the fate of Blaster. It was especially interesting to see how you fellows overseas portray everyone’s favorite mechanical men… although I did miss the usual snide comments the Decepticons usually hurl at the Autobots during their battles.

It was also nice to see the old characters again especially Mirage and Starscream (my favorites), not to mention ol’ Op (even if it was brief). Another interesting thing about “Man of Iron” was the way the characters were drawn… they look exactly like the figures!

Okay, Bob. Where’s the Megster? He shows up all decked out in red, orange and blue on the cover of issue #33, and I begin to think that maybe he’ll return next issue, thrust into a time wrap back to the fourteenth century, and not a Cyberton at all! Since he didn’t return, I guess I can continue to make it a safe bet he’s on Cybertron, in the hands of his fellow Decepts, giving him a new “galvatronic” body?
To close off, I would like to add my name to the (hopefully) growing lists of people who demand to have you guys make the HEADMASTERS as an unlimited series. You started it, but that doesn’t mean you have to finish it! Until Shockwave learns to meaning of “personality,” Make Mine Marvel. 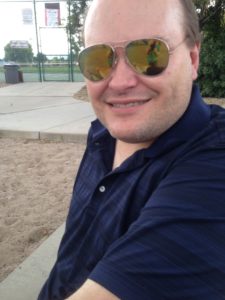 Now, 30ish years later we get to hear from Tori again.

I grew up in Rural Southern Arizona, and the first Transformers experience I had was discovering a few figures, specifically Ironhide, Sideswipe and Bluestreak in a local store, the kind which later would close down as Walmart took over. The figures were amazing, and I recall cutting out the stat cards on the back. Shortly after that I discovered the first issue of the Marvel Comic, then the TV series. I collected every issue for the next seven-odd years, and recorded every episode of the TV show on VHS. I also collected almost every figure released through 1988, missing only about two or three, as I recall.

Initially I bought them at a local grocery store in the nearest “big” town (Wilcox). As my interest in comics expanded I started ordering shipments from Mile High Comics which was the best way to get a lot of obscure titles couple of weeks. Sometimes I’d grab issues, especially import copies of the UK edition of Transformers, from comic shops in the nearest big city (Tucson).

Youseph: What compelled you to write to Marvel’s Transformers?

I was doing a lot of writing projects back then, but my love of the comic and what they were doing with it was a big motivator. The TV series felt a bit “canned” to me, lots of filler episodes with an occasional cool story, but the comic was an amazing ride every issue, and I always thought of it as the “definitive” Transformers. I decided to write to them and see if I could get my letter published….I think I wrote it as carefully as I could to see if it would meet the typical criteria Marvel looked for in letters they would publish, and that paid off. Oddly, until this interview came up I had pretty much forgotten I had written that letter (and been published).

In thinking back I recall being ecstatic. I had written other fan letters and also published a fanzine on sci-fi and fantasy gaming. I’d received at various times either no response or once even a negative response (from author Piers Anthony, who disliked that I was critical of his latest Xanth novel at the time). But the Transformers crew actually published my letter and it felt very affirming to my devotion to the series.

Today I am a manager for a company focused on healthcare benefits for the State of New Mexico. I am also a published game designer for various role playing games (the paper and pencil kind). I have a wife and five year old son who (you guessed it) also loves Transformers, although the shows these days are a bit different than the original. I remain a Transformers fan although I stopped collecting the figures ages ago, unfortunately. I enjoyed the movies that came out, even if they were a new revision with Michael Bay at the helm, and really love the video games that have been released in recent years, including Fall of Cybertron, War for Cybertron, Devasation and even Rise of the Dark Spark. I’m looking forward to seeing if Hasbro can turn the Transformers into a franchise series for film, too.

Many thanks goes out to Tori for his time and the information he shared with me. I have a few more of these interviews to share with you so stay tuned.