My fifth response to the 100 letters I mailed out was from one Brendan Crispin. Crispin’s letter appeared in issue 63, entitled: Kings of the Wild Frontier. 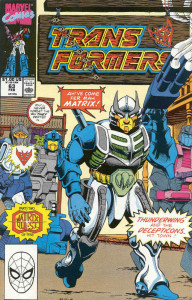 Brendan Crispin, responded to my letter for an interview by saying, “My mother forwarded the letter you sent to my old address which you found in the fan letters page of issue #63. Yep, my mother still lives in the same house. It’s wild to think you are contacting me more than 25 years after the Transformers comic book published my letter.”

One Suggestion: I’m sure a lot of Transformers fans would like to contact others, including me. So why don’t you devote a page each issue to addresses of TF fans who’d like to correspond? Give it a try, eh?

Now, 30ish years later we get to hear from Brendan Crispin again.

Youseph: How did I discover Transformers?

My cousin who was a few years younger than myself came over to my house and brought his Constructicon Bonecrusher figure with him. I remember how eagerly he told me about Bonecrusher. I don’t remember specifics, but I imagine he told me about the character’s quotation and info from Bonecrusher’s profile as printed on the back of the toy packaging. Probably also that Bonecrusher combined with other Constructicons to form a larger robot. I was about 13 years old then. I quickly became enamored with Transformers.

Youseph: Where did I get my Transformers comics from?

I started collecting the original Transformers comic book series from very early on. I don’t remember which issue was the first I bought, but I’m pretty sure it was one of the first 8 issues and that I bought it at a Waldenbooks which was a mall-based bookstore chain. I don’t recall if I ever paid for a subscription to have the comics sent to me in the mail, but I would’ve bought issues at various comic book stores and other stores that sold comic books back then such as grocery stores, drug stores, KMart and maybe even gas station convenience stores. I did buy the first several issues of the series which I had missed, and I collected the entire series till the end.

Youseph: Who are you today?

No one extraordinary, but I wish I could once again experience the anticipation and thrill of discovering new Transformers characters in the TV cartoon and when the new season’s toyline was released.

Youseph: Are you still a Transformers fan?

Yes and no. I’m not an ‘active’ fan, but I still strongly and fondly remember my teenage years as a Generation 1 Transformers fan. If new Transformers toys and cartoons were still being produced in the style of Generation 1, I’d undoubtedly still be buying some figures and watching the cartoon. 😀 But sadly, G1 went down an unfortunate path leading to Pretenders and Action Masters.

A huge thanks goes out to Brendan Crispin for his time to respond to me. I really enjoyed his responses to my questions.