I’m so excited to start sharing with you all the responses to the 100 letters I mailed out. I’m starting with Abe Smith. Abe was the first to contact me. In fact it was just a couple of day after I sent his letter. 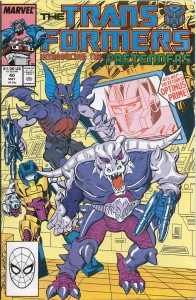 “Thank you for your letter.” Abe e-mailed. “I’ve wondered often if I would be able to track down which issue it was in. ”

Dear Marvel,
The TRANSFORMERS are really neat! I’ve just finished reading #34 (good, of course), and in glancing through the letters I saw an attempt for a no-Prize. He was trying to explain the whole Bumblbee/Goldbug thing; “Right now in 1987, Bumblebee has become Goldbug. How could he be Bumblee again in 2005 (as seen in the movie)? Well, I have a simple explanation. These are Transformer Comic books, that was the Transformer movie. Who says the comic book has to do everything the movie does.
Abe Smith
Portland, OR

You have a point there, Abe. Also consider that the Transformer movie doesn’t take place for another eighteen years. Eighteen years ago, we’d barely put a man on the moon. Nixon was President, Marvel was only eight years old, and no one had ever heard of Transformers. Wait a bit and see if things don’t change as much in another eighteen!

Now, 30ish years later we get to hear from Abe once again.

I discovered Transformers by seeing a TV commercial on Sat morning cartoons. What did it was watching Soundwave transform and then the kids took out tapes that transformed into Ratchet and Lazer Beak. I was instantly hooked.

I would buy them on the wheel racks that are similar to those sunglass racks that you spin today. They used to have them in grocery stores and I’d save up. Once I started collecting seriously and finished my collection later, I bought them from Excalibur comics in Portland.

Today I’m a Father, musician, sci/fi fantasy enthusiast, and I like whisky. To the dismay of girlfriends and friends alike…yes I’m still a fan.
Many thanks go out to Abe for responding to my letter. I really enjoyed this and I’m looking forward to sharing all the other interviews with you later in the coming weeks.