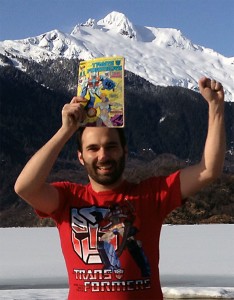 This was not an easy photo to get.

Transformers issue 9 continues from issue 8. In this issue we are introduced to a new villain, Circuit Breaker. She has incredible power and wants nothing more then to protect her boss, G.B. Blackrock and destroy all robots that exist on earth. But before we get into the story and our new super villaines lets talk about the over on issue 9.

This cover is dominated by a bright yellow background.The title logo of the Transformers is in solid blue. Starscream stands menacingly behind our new villaines, Circuit Breaker who made her first appearance in the last issue. Circuit Breaker, who’s whole body is covered in electronics has an energy field glowing around her right hand as she points onward with her left. Starting on the top right is a box that announces to the reader, ‘The Lady’s Name Is — CIRCUIT-BREAKER!’ A second box beneath the first reads ‘She’s Out To Destroy All Robots…’ Finally a white box on the bottom right reads, ‘That is, If STARSCREAM Doesn’t Get Her First!’ Circuit Breaker is standing in front of some rubble as Starscream appears to be standing in a valley. 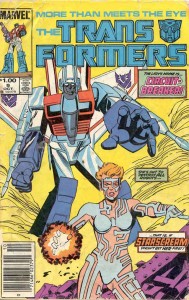 This issue focuses a lot on G.B. Blackrock and his plans to stop the robots that have started to show up on earth with a new weapon. Blackrock is driving practice laps on a race track before he is stopped by General Capshaw. Capshaw is concerned over Blackrock’s plans to show off a new weapons that is supposed to be able to kill the Transformers. Blackrock, who is annoyed with the general for interrupting his racing practice pretty much ignores him, Ironman style, and heads off to the hospital to visit Josie Beller and see how she is recuperating.

Josie shows Blackrock some new tech she has been developing from her bed in the hospital. Tech that would allow her to move again. Blackrock becomes concerned that she might be putting herself in another dangerous situation. Her desire to help her boss defeat the robots who have affected Blackrock’s company and crippled her is made clear. 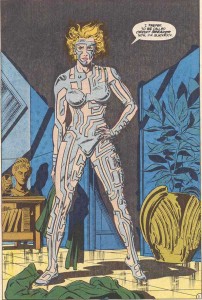 Josie soon escapes from the hospital and confronts Blackrock in his office that evening. She shows herself as Circuit Breaker. Wearing a suit of circuitry that allows her to walk and move around again despite her damaged nervous system. The suit also gives her the ability to blast things. Blackrock is dead set against Josie doing anything against the robots due to his need to protect her from any more harm. Circuit Breaker ignores her boss and goes off to do what she feels she has to do.

After having been revived from their imprisonment, the Autobots seek a solution to their fuel shortage. A deal is struck between Blackrock and two Autobots, Wheeljack and Jazz. The way this is played out almost sounds like extortion. Jazz kidnaps Blackrock and offers to protect him from the Decepticons in exchange for fuel. This could also be chalked up to the the Autobots being new to earth and still not quite sure how to deal with humans. In the end, Blackrock makes and agreement with Wheeljack. 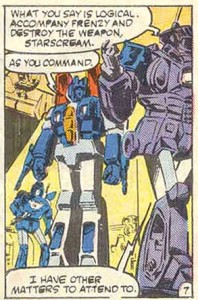 After hearing that the Autobots are operational and that Megatron is missing, Shockwave orders Starscream and Frenzy to destroy Blackrock’s weapon. This is done more as a moral boost for the Decepticons, then as a tactical strategy.

Buster spends this issue trying to take care of his fathers auto shop. All of his dad’s customers have been calling upset that their cars have not been repaired yet. Buster can only offer week excuses to delay them while his father recuperates in the hospital. Buster experiences another headache that cripples him, but in that moment everything about auto repair because crystal clear to him, and with only his mind, he is able to repair the vehicle he was trying to work on. 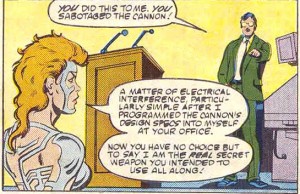 Later on as Blackrock is unveiling the the ‘Anti-Robot Photonic Multi-Cannon’ (that was a mouth full, but you gotta love it!) it is discovered that the weapon had been sabotaged during the testing. It is learned that Circuit Breaker is responsible for the new weapon not working. She did this in hopes that her boss would announce herself as the intended weapon against the robots.

Just as Blackrock is about to make the announcement, Starscream and Frenzy attack. Jass and Wheeljack fight back making good on their promise to provide protection to Blackrock. Circuit Breaker, unable to tell Decepticons from Autobots, injures Wheeljack. The Decepticons are eventually driven off by her and Jazz. 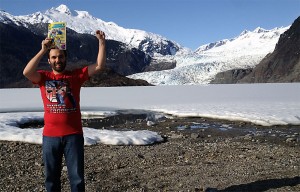 No letters this issue.