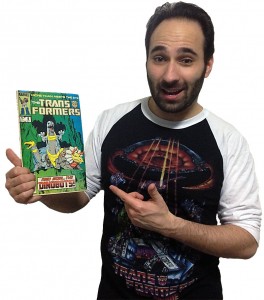 Transformers issue 8 continues from issue 7 with Ratchet traveling to the Savage Land to locate the Dinobots. It is his hope that since the Dinobots defeated Shockwave shortly after the Ark crashed on earth that they might be able to do it again.

The cover of issue 8 shows three of the five Dinobots. Grimlock, Slag and Sludge are seen standing on a green mountain top. They look menacing in their dinosaur modes with their large shadows behind them. “And now . . . the Dinobots!” is written on the bottom of the cover in red. Its a great cover. I am not sure why only three of the five Dinobots are displayed on the cover. This Dinobots story is different from the Cartoon version which, at first, only showed the three Dinobots ( Grimlock, Slag and Sludge) in the first episode titled ‘S.O.S. Dinobots’. Swoop and Snarl would not be introduced in the cartoon for a few episodes later. 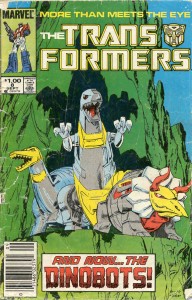 This would be a good time for me to get some of the things that have been driving me nuts about the Dinotbots’ story out of the way. The Dinobots where first introduced in issue 4. The story goes, that back when the Ark crashed landed on earth four millions of years ago, Shockwave was not far behind with a game plan to rescue the Deceptions and destroy the Autobots. The Ark used some of its last power reserves to reconfigure five Transformers into the Dinobots to take down Shockwave. A plan that worked. There is no mention at all of which Transformers where reconfigured into the Dinobots. They have no memory, that I have read about yet, of their life before being Dinobots. I really like the cartoon’s introduction of the Dinotbots better which was that the surviving Autobots built the Dinotbots to help battle against Megatron after Spike Witwicky gave the Autobots a history lesson about Dinosaurs.

Regardless, I am still left with the following questions after reading issue 8. 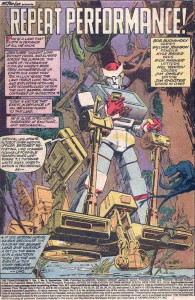 These questions could be answered in later issues of the comic. Also, its good to remember that this is a fun comic book to read. Its easy for me to just blow past this plot holes and enjoy the ride. And so far, it has been a fun ride.

So, Ratchet travels to the Savage Land to find, revive and convince the Dinotbots to help him defeat Shockwave.
Back at the Ark, Shockwave checks in on Megatron, who has guarded the Ark and prepared the head of Optimus Prime for transport. Shockwave takes the head of the Autobot leader to the aerospace plant which was captured by the Decepticons in the last issue. Army forces where waiting around the planet, but are futile against Shockwave as he readies construction of new Decepticons using the Matrix program within Prime’s head.

This brings up another another issue I am having with the story. Optimus Prime transferred the creation matrix over to Buster Witwicky. So, how is he still able to give life to new Transformers? If I dig a little bit into later comics the letter columns confirmed that some residual energy remained in Prime’s head. This energy was used on the Constructicons, but tapped out before Jetfire could be completed. 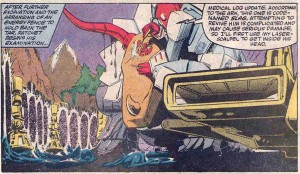 Back to the story. Ratchet makes contact with Megatron, showing him playback of the Dinobots defeating Shockwave. With Ratchet’s end of the bargain completed he plans to meetup with Megatron on a nearby mountain. When Ratchet Arrives at the location, Megatron threatens to kill him. This action breaks the agreement the two Transformers had with each other. At that moment the Dinobots spring forth from their hidden spaces in the snow on the mountain. Ratchet knew Megatron wouldn’t hold ups his end of the Rite of Oneness agreement. It also turns out that the video of the Dinobots fight with Shockeave was from their original battle with him over four million years ago.

Megatron defeats the Dinobots, giving you the sense of how powerful he truly is. This leaves Ratchet the only standing Autobot left. He tries to take Megatron off the side of the cliff he is standing on. This attempt fails. In fact, Megatron does not even budge an inch. Ratchet’s impact with Megatron does weaken the cliff beneath him and Megatron ends up falling off the mountain as a result. In a last-ditch effort to save his own life, Megatron transformer in to his smaller gun mode and disappears into the snow below. 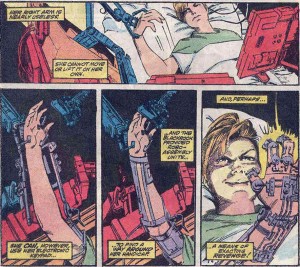 Back at Josie Beller’s Hospital room, she has managed to wrap her arm with circuitry and fires and energy bold, destroying the hospital room’s TV. She thinks she is about ready to check out.

No new ads this issue.

No letters to Marvel inside this issue.