Issue 61 of Marvels’ Transformers is oh so good! Thought it is not flawless, it is a great story and I can’t way to review it with you and share my thoughts on it. But before we get into the Religion and God of all Cybertronian beings, its check out this cover. 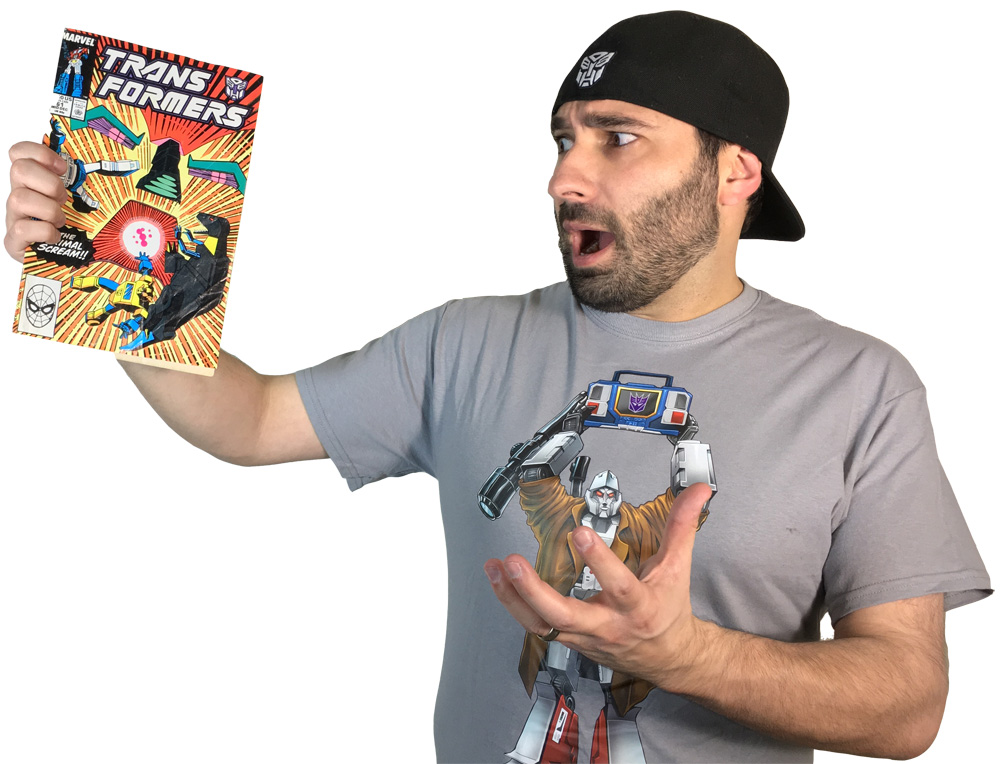 Awesome Transformers T-Shirts Can Be Found At 80sTees.com!

This busy cover features Jazz, Grimlock and Bumblebee afloat or maybe falling. The background is a yellow and orange lined mess. It looks like it’s a pit underneath…. OH! It’s a face! It’s Primes’ face! I did not see that the first time over. The tag line on the cover, “The Primal Scream!!” fits now. I get it. It’s really close inline to the story within. The render of Primes’ face is very busy though and hard to understand. I get what the artist was going for, but I think the limited color palate really hurt this cover. 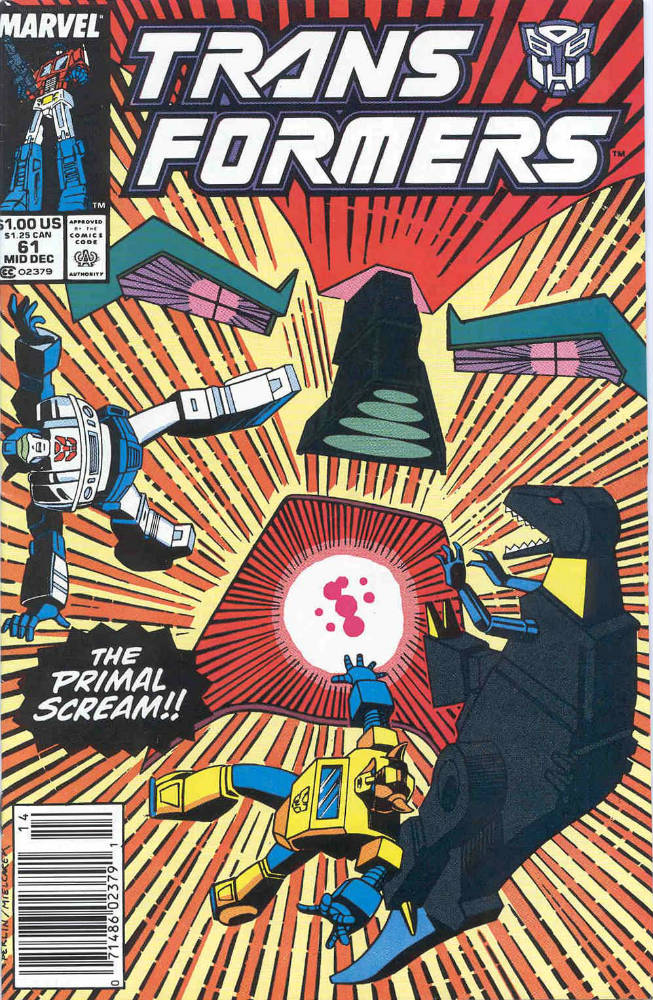 The Keeper tells the story of two gods known as Primus and Unicron and their fight. A fight that ends in the two crashing into on to separate metal asteroids. Due to their weekend state they become trapped on the Asteroids. 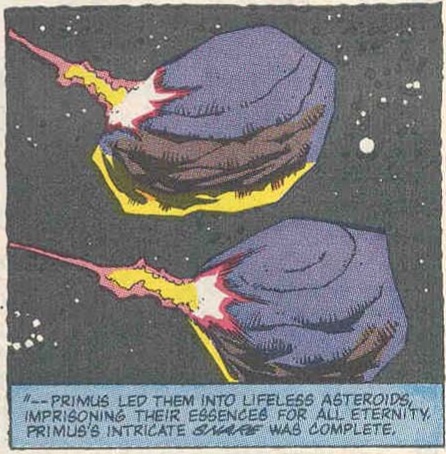 Over a long period of time, Primus is able to turn his asteroid into what is now Cybertron. Unicron turns his Asteroid into the planet eating bad guy we all know from the 1986 animated movie. Primus creates a race of robots called Transformers to aid in his combat of Primus. Now, deep in space, Unicron searches for Primus.

Now reaching the end of his story, the Keeper is hit with a Decepticon blast. The Autobots fight back to the Decepticons from waking Primus, only to have Octopunch anciently ricochet a shot off of Grimlock waking Primus. He screams, sending shockwaves through out Cybertron. 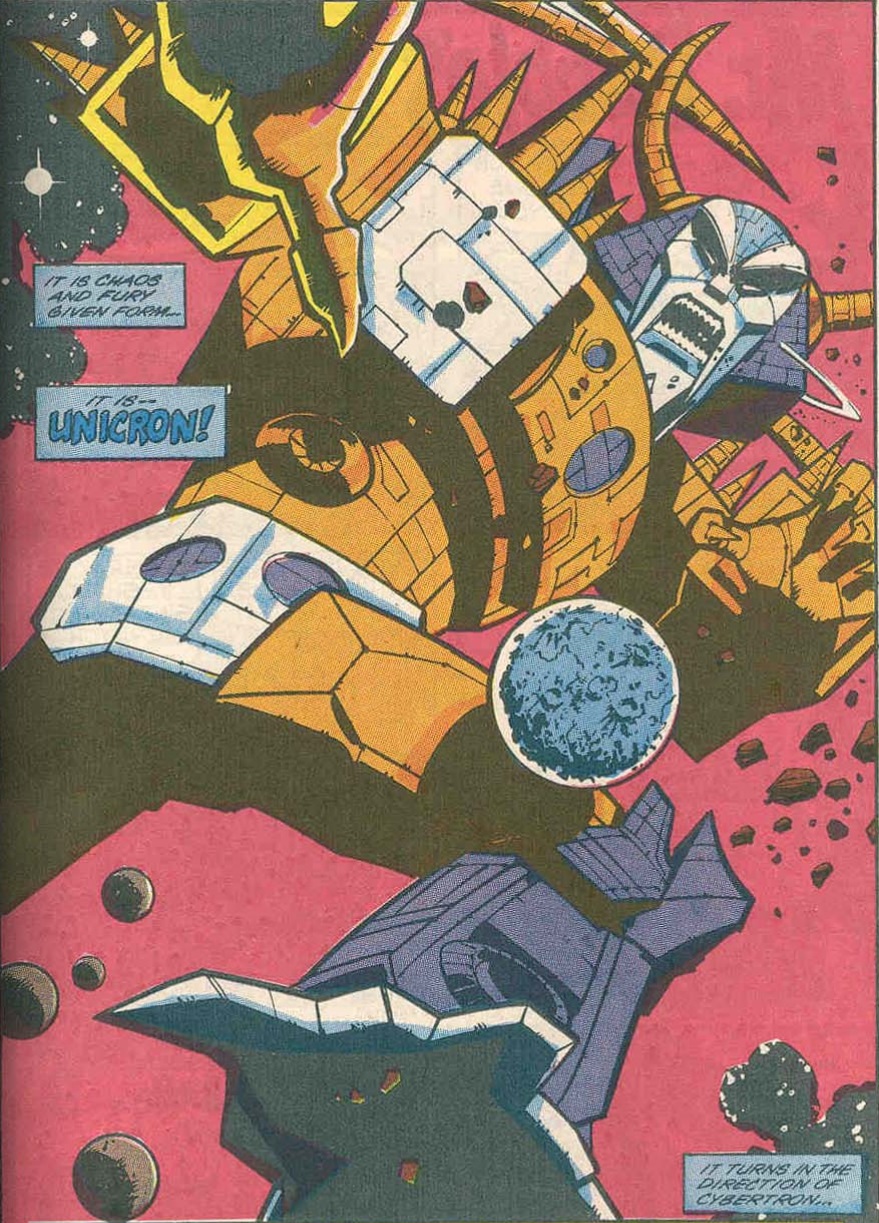 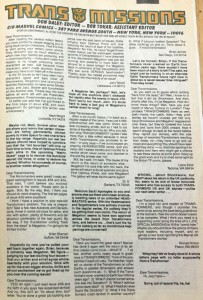 After reading the several million letters you have printed by people begging you to bring back certain characters, I feel it is time to start giving your writers some advice. They shouldn’t pay so much attention to which new toys Hasbro are producing, and -most importantly- it shouldn’t matter that Hasbro is no longer producing certain characters as toys. Just because these characters aren’t made anymore doesn’t mean you have to kill them off in the comic!

In the 55 issues so far I have seen many characters (good and bad) killed off: Shockwave, Megatron and (everyone’s favorite) Starscream, to name some Decepticons, and Jazz, Blasters and Sunstreaker, on the Autobot side. Please stop this trend before all we’re left with are Pretenders, Micromasters, Powermasters and the like!

I’d better just add this I’ve just flicked to the final page of issue #56, and seen Megatron! So perhaps this letter was unnecessary.

Maybe not, Mark. Several other readers share your worry that certain characters are being permanently ditched purely to make space for new characters in the toy range. Hopefully our last few issues should have helped to convince you that the “old favorites” will crop up from time to time. One of Optimus Prime’s main aims in the upcoming “Martix Quest” saga is to recover the Autobots’ sacred life force, in order to restore his injured. Whether he succeeds, of course, is another matter altogether!

The Micromasters were great! I really enjoyed seeing them in issue #54 and #55. That said, I can’t believe you involved wrestlers in the comic. Please don’t do it again, Bob. By the way, Bob, I think you should do more drawing. The first ten pages of issue #55 were excellent!

I think I have a solution to your new/old Transformers problem. The key is integration! Take a few new Autobots and Decepticons, throw in some old ones for spice, and mix with action, plenty of fireworks and destruction (preferably of the bad guys!). By the way, if the Transformer coming  “back from the dead” is Megatron, I’m going to be thrilled to bits!

Hopefully by now you’ve pulled yourself back together again, Brian, because it certainly was Megatron. We figure -judging by out last sizzling four issues- that our writer and artist agree whole-heartedly with your solution. Stick with us for the even bigger shocks, thrills and all-out excitement we’ve got lined up for you over the coming issues!

YES! All right! I just read issue #56 and my faith in you guys has expanded tenfold! And no, this isn’t an “It’s about time, too!” letter. You’ve done a great job building suspense over the past batch of issues, finally bring back Optimus Prime and now featuring the return of best of the baddies, Megatron! No frills, no Head/Target/Power master feature, just the unchanged, supreme epitome of Decepticonism! I have dreamed of this resurrection! Megatron was just too cunning and powerful to have been destroyed by a space bridge! Put Megatron back in command of the Decepticons and let’s see some SERIOUS head-crackin’! Thanks, guys. You topped yourselves magnificently with this beauty of an issue!

A Megatron fan, perhaps? Well, let’s hope all this euphoria didn’t dissipate too rapidly after the events in issue #59. Don’t worry too much john. It’s kinda hard to keep a bad guy of Megatron’s caliber down for long!

After a six month hiatus, I’m back as a regular reader of the comic. I was just a little overwhelmed with new comic books and ever-increasing prices, and so I had to cut some of the titles from my list. Why, you ask, did I drop TRANSFORMERS? I guess I was more than a little miffed because in issue #40’s Transmissions you promised to reveal -in sixty days- if we could expect an ongoing HEADMASTERS series, and you never did! I waited months and months for a verdict which never came, and decided in the end the answer was “no”.

But, as I said, I’m back. The cause of my return is the return of someone else.. Megatron! I’m sure that with him back, the series will return to its old splendor and glory. First Optimus Prime, and now Megatron! The galaxy will never be the same again!

Welcome back! Apologies to you and anyone else out there who’s been anxiously awaiting news of an unlimited HEADMASTERS series. With the Headmasters and Targetmasters now actively involved in the regular series, it’s unlikely they’ll be getting their own comic. The return of Megatron seems to have won approval across the board from Transformers fans, and believe us…that’s just the tip of the iceberg as far as momentous happenings are concerned!

Have you heard the great news? Marvel has done it again with the return of its all time classic comic book -WHAT IF…? At last, another comic nearly equal in greatness to TRANSFORMERS. Think of the possibilities! Good old Uatu, The Watcher, might tell us stories of the Transformers on other Earths in parallel dimensions and answer such questions as: 1.) What if the Transformers never crashed on Earth four millions years ago? 2) What if Unicron turned someone else into Galvatron? 3) What if optimus prime never died? 4) What if Ratchet never found the Dinobots? 5) What if the Transformers crash-landed in another country? 6) What if Unicron battled Galactus? The ideas could go on and on. Think about it, guys…it would be fantastic!

Let’s be honest, Brian, if the Transformers never crashed on Earth four million years ago, there wouldn’t have been much of a story to tell! That said, we might just be looking in on an alternate Earth Transformers future right here in about six or seven issues’ time. Intrigued? Then stay tuned…

so you want us to guess who’s coming “back from the dead,” eh? Well, I know for a fact that it will be Shockwave. And then, shortly after this, it’ll be Megatron. How do I know these things? Well, have you ever heard of Marvel Comics in London? They produce TRANSFORMERS there as well, and -here’s the catch, folks- they print stories we haven’t covered yet! Not only have Shockwave and Megatron reappeared over there, but they’ve covered the future ‘bots and ‘cons from 2005 onward. Now it wasn’t enough to have all the recent battles (they reprint our stories), with the vast number of wounded Transformers resulting from those, no -they have to go and (almost) end everything! You should have seen what they did to- no, that’d be spoiling it for readers over here who might get a chance to see these stories at some point. Keep up the good work and try to shed some light on the British TF comic, please.

WRONG…about Shockwave, but RIGHT about his return in the UK continuity. You seem to be one of those fortunate readers who has access to both TRANSFORMERS US and UK stories -unlike our next letter writer…

I’m a loyal fan and reader of TRANSFORMERS, and though I consider the comic to be among the best being published at the moment, I feel the comic doesn’t seem to be complete. What I think you need is a supporting comic along the lines of G.I. JOE SPECIAL MISSIONS to fill this “Comic hold.” Maybe you should follow the advice of many loyal readers, Including myself, and organize a new book reprinting the Marvel UK transformers stories!

Whey-hay! We’ve finally don it! A whole letters page with no letter supposedly from a transformer!

Man oh man, a lot happened in this issue. A lot of world building and understanding of the Transformers race. This was a book well worth the cover price.

With each issue it seems as if Simon Furman is giving the characters their real voice. Or a voice that mimics what we have been seeing on the Transformers cartoon program. Grimlock and Jazz are really sounding like themselves in this issue, while Bumbleebee is showing signs of being a badass and not a bad leader either. 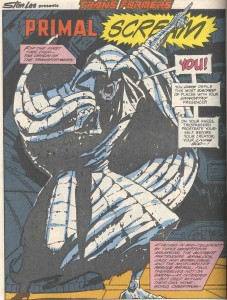 The Keeper is a really cool looking character. I kind of hate that he looks like he died in this issue. I would have liked to see more of him.

As the reader, we don’t get the full and complete back story of Primus and how he was created. The story cuts to other happenies while the keeper explains that part. But I don’t feel cheated because what we do get is Gold. IT’s a back story I like and really enjoy. It adds depth to the Transformers and I’m ready for the next issue.

We also see the art of Geoffire Senior in this issue. It’s different then Delbo’s art, It’s good. I don’t know if it’s better, but it’s quite good.

So what did you think of this issue? How do you like the back story of Primus, Gods, and Cybertron?