Transformers issue 62 kicks off the Matrix Quest. The Matrix may very well be the only thing in the universe that can stop Unicon and the Autobots are desperate to find it. I’m desperate to find out what happens, but before we flip open this floppy lets check out the cover art! 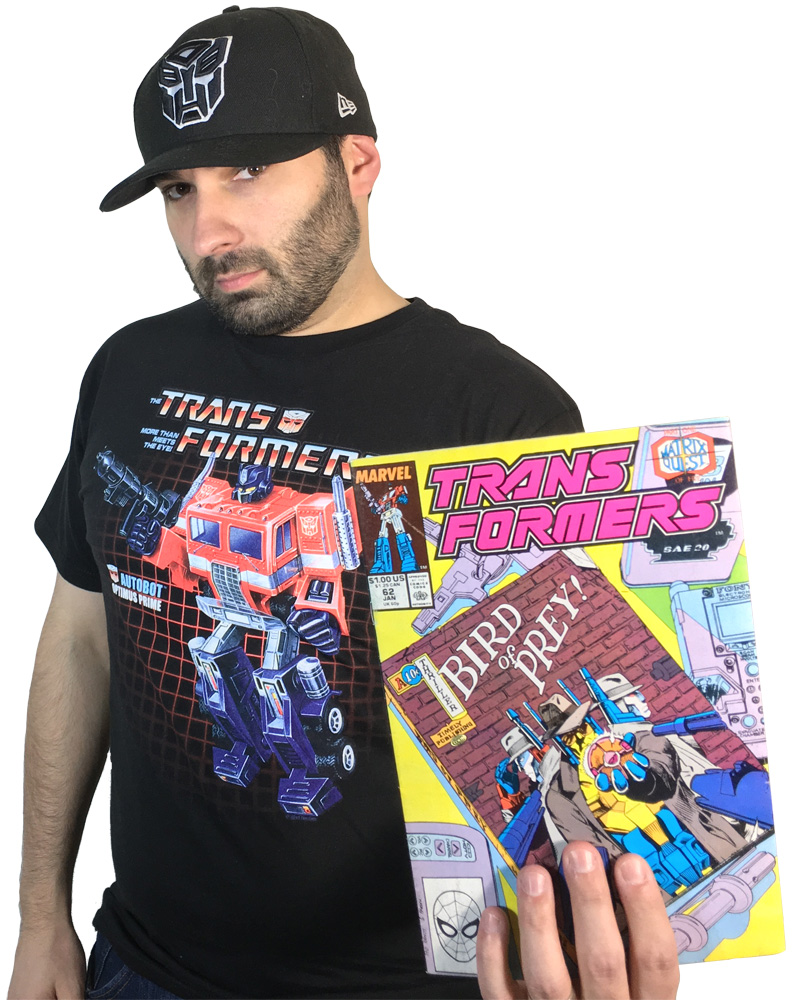 Fantastic Transformers T-Shirts Can Be Found At 80sTees.com!

The cover to issue 62 makes a whole lot of sense after you read the issue. This cover show the cover of a cheap, ten-cent, detective novel featuring Nightbeat, Siren, and Hosehead being surrounded at gun point. This plays into the fact that the three characters are involved in a bit of sleuthing within the pages of this comic. The detective novel titled, ‘Bird of Prey!’, is surrounded by items which i think are Cybertronian in nature. Keys, lighter, micro recorder, and others. The Transformers logo at the top has a slight change with the Autobot logo being replaced with the logo for the Matrix Quest. The cover is nice and there is nothing wrong with it. It’s just not a favorite of mine. 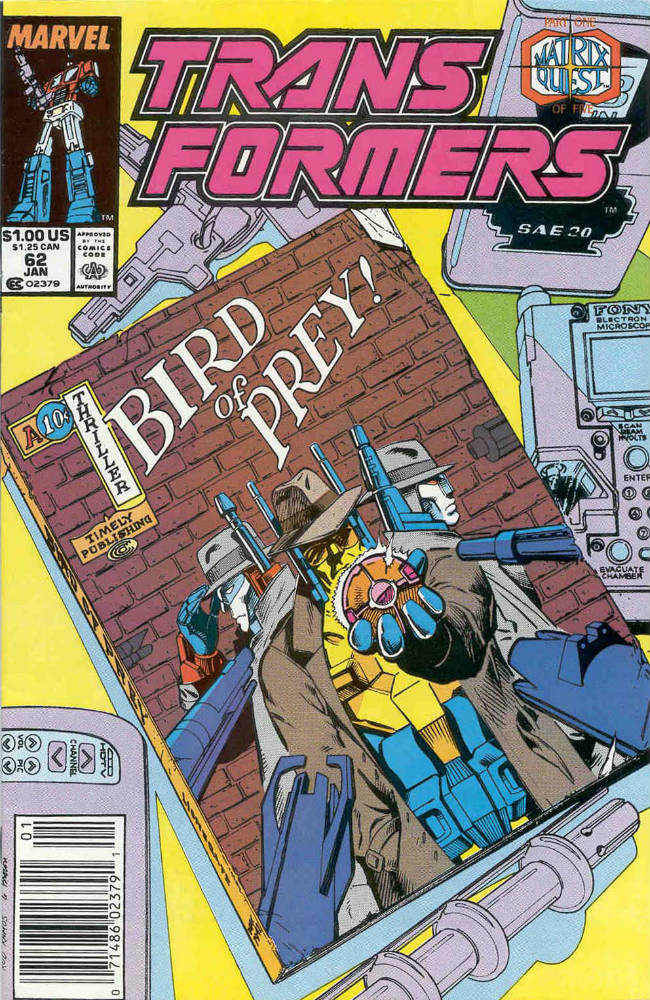 Our issue kids off with the Autobot faction sending out search teams into the galaxy to find the Creation Matrix hopping they can find it and use it against the Unicron threat. 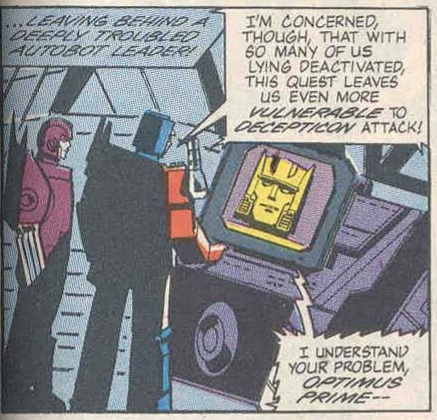 On the planet of Pz-Zazz, Nightbeat, Siren, and Hosehead question local mobsters as to the whereabouts of the Matrix. Nightbeat, lacking true interrogating skills, result in the headmasters punched, thrown through a window, and shot at. Am alien being is hurt in the cross fire, but passes on a bird statue to Nightbeat before death takes him. 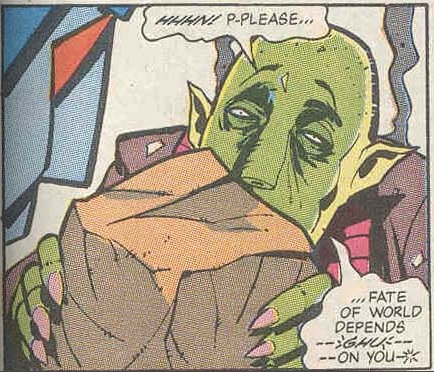 After getting away from the gun fight, Nightbeat wants to follow-up on this statue, but his friends convince him to continue with their mission at hand. Still, Nightbeat feels the statue has something to do with their main mission. 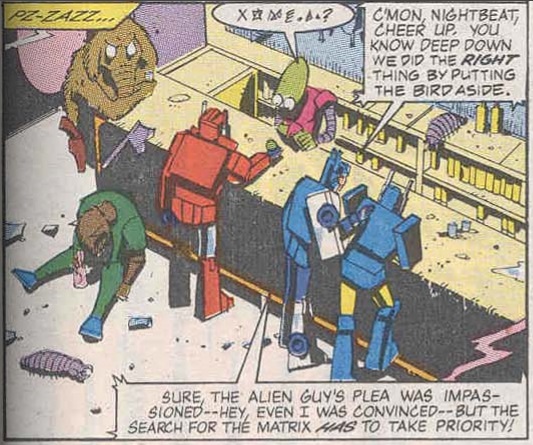 The Autobots conversation is overheard by a Miss Fatale. She shared with them the story of the ‘font of life’ and how it once sat on top of a nearby mountain. The Autobots think this might be the Matrix. In trade for Miss Fatale taking them to the mountain temple, she asked for the bird statue with the claim that it is her property. Siren and Hosehead go with Fatale to the mountain while Nightbeat retrieves the bird statue. 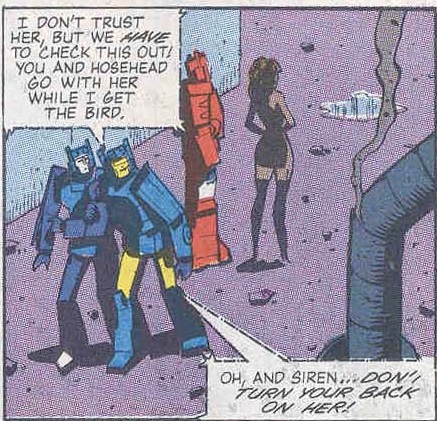 At the top of the mountain, Hosehead, Siren, and Fatale come face to face with one of the local gang leaders who wants the bird statue. Nightbeat races up just then and shares that the statue is a life-giving source of power, not unlike the Matrix of leadership. He disables the gangsters and places the bird statue back within its cradle on the temple. 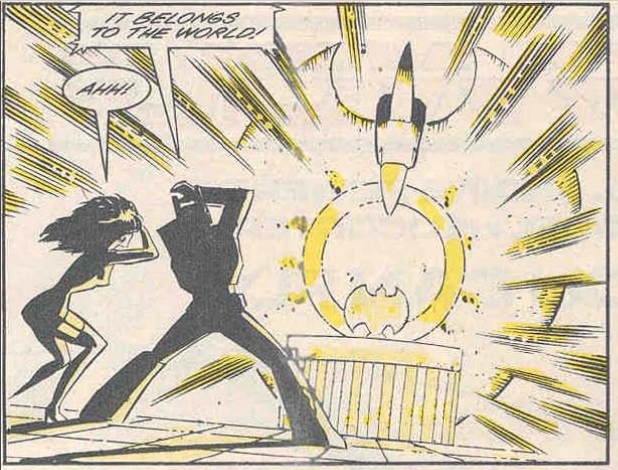 Upon placing the bird back in its proper place, the planet is restored to it’s old glory. The story ends with Thunderwing and his Decepticons shooting Nightbeat and the others in the back. He wants to find out why so many Autobots are searching this end of the galaxy. 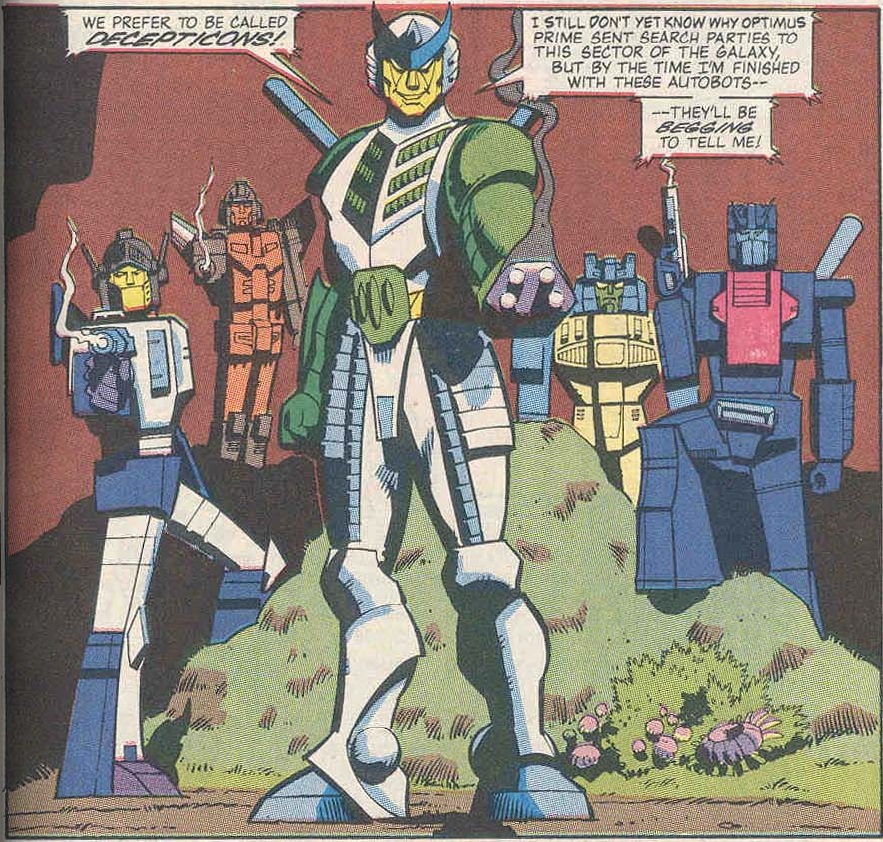 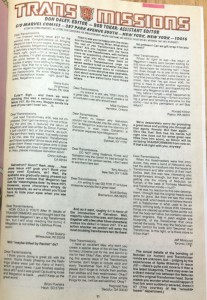 I’ve finished reading issue #57 for the second time. Congratulations on bringing Megatron back to your pages. Among some of us females, Megatron’s well-built chassis is definitely a sight for malfunctioning optics! That’s right, guys -I’m a female Decepticon. Anyway, I’m glad somebody finally had the good sense to pay attention to the hordes of angry ‘cons waiting for Megatron’s return. Now that he is fully functional, let’s see him regain his rightful place as leader of the Deceitpcons. We know Meggie is the ONLY Decepticon leader…right, guys? Besides, Megatron’s cute!

Cute?! Sigh…and there we were thinking this was a serious critique of issue #57. By the way, Meggie sends his love (if you can’t beat ’em…!).

Just read Transformers #56, was not impressed. Don’t get me wrong, I’m not criticizing the plot (as it featured the return of Megatron and was written by Simon Furman, it just couldn’t fail) or the artwork, as such. The part that I really hated, that really ruined it for me, was the eyeballs! transformers don’t have eyeballs!! Since issue #43 you’ve given them these meaningless dots in their eyes. Please get Jose to stop drawing them in. Also, please introduce Galvatron soon!

Galvatron? Soon? Yeah, okay… how does issue #67 grab you? Book your copy now! eyeballs, eh? Well, the eyeballs are gradually being phased out (you’ll have noticed that Megatron had lost his “meaningless dots” by issue #57). However, some characters simply do have eyeballs, so we’re afraid you’ll just have to hide your eyes when you see them!

HOW COULD YOU?! After 31 issues of TRANSFORMERS you’ve brought back the malevolent Megatron! I am a big Transformers fan, but I will stop reading the comic if Megatron is not killed by Optimus Prime… soon!

Will “maybe killed by Rachet” do?

I think you’re doing a great job with the comic. You’re finally phasing out the fleshlings (there were just too many of them!), which is good news. I just finished reading issue #57 and it was great! Op busting loose and Megaton is back… yeah!! Keep up the great work!

Glad to see you’re happy with the direction the book is taking, Brian. What about the rest of you Transformers fans out there? Are you happer with the focus mainly on the Transformers, with humans more as supporting characters? Let us know what you think. Okay, back on issue #57’s Transmissions page we asked readers to tell us whether the idea of a time crossover story to introduce Galvatron to the storyline was desirable. Just about everyone had an opinion, so here are a few selections from those letters…

…my answer is yes, yes, YES! I think it’s a great idea. I’m sure you could create a lot of confusion over whos hould lead!

…there’s no reason why Galvatron couldn’t be introduced into the comic. Why not let Megatron assume the identity of Galvatron, or even make Galvatron a character separate from Megatron!?

…DO NOT bring Rodimus Prime and Galvatron into the comic! It’s bad enough to see them in the cartoon series, i don’t want to see them here too!

…I’m writing to say GO FOR IT! A future crossover sounds like a great idea!

And so it went, roughly 3-1 in favor of the introduction of Galvatron. Well, majority rules in this case, and Galvatron (together with a few other future characters) makes his debut in issue #67. It’s an action shocker we predict will sway the most doubting Transformers fan! Be there!

I have an excellent idea: why don’t you create a special issue of the all-new Transformers Universe just for me, and send it to me for free! Okay? Also, when you’re creating this special issue of the Transformers Universe, don’t forget to include each and every Transformer from A-Z. Okay? And please don’t forget to include their profiles, their abilities and their weaknesses. Okay? If you would kindly do these three simple things for me, I will be well satisfied. Okay?

No Problem! Can we gift wrap it for you as well?

Whoa! All right! At last -the return of Megaton! i nearly went berserk waiting for this issue after I heard about it in issue #55. Will Starscream be returning too? I hope not. Even though he is one of my favorite Decepticons, he shouldn’t come back for a long time (he’s a little mad at the moment, ya know). Now that i’ve got issue #56, I’m going to have to suffer another agonizing thirty days for issue #57, and (hopefully) the reason why Megaton is still alive!

Hey, before i forget -what happened to Bob? Don’t get me wrong- Simon is providing a great and refreshing storyline for the comic- but is this permanent, or will Bob return?

We’re desperately sorry for providing a great issue and putting you through all the agony, Ronald. But then again… life’s like that! Bob has his hands full right now (look out for some great new titles from him soon), so Simon will be scripting TRANSFORMERS from now on. If that’s all right with you, anyway!

When the Headmasters were first introduced, they were a band of Nebulans who had the ability to transform into the heads of Transformers and take control of their inert bodies. Well, this was new, interesting and straightforward enough, but then we started getting into the mixing of Nebulan (or human, in the case of Fortress Maximus) and Transformer minds -huh?!

That was my reaction to this new development. I thought that the original heads were gone for good. But when we see this mind mixing stuff, which leads us to believe there’s still a Transformers in what used to be an empty, unliving body. In issue #39, however, things are cleared up when Spike points out that the body isn’t alive, but contains several latent engrams, that in plain english are blueprints, of the Transformer that once owned the body. This way the Nebulan can better control his body and “become” that Transformer. Is this right, or is there more to it than that?

The actual details of the bonding of Nebulan (or human) and Transformer minds are unknown, but -judging by the experiences of Spike Witwicky in issue #51 -there’s quite a bit more to it than a few latent blueprints. There may even be a direct mental link between the Nebulan and the original Transformer head. Sorta’ makes you wonder what would happen if that link were suddenly severed, doesn’t it? (this courtesy of the “unsubtle teaser” department.)

One thing I really liked about this issue is, I feel like writer Simon Furman is opening a door to restore Optimus Prime back to his old psychical self. He is hinting at us that he is planning on dumping the Powermaster Prime crap as soon as he can. I hope this is true. It’s really exciting and again I’m left with wanting to dive right into the next issue.

The art in this book is good. It does make me think of Generation 2 comic art though. Not a bad thing from my stand point. Just noticed it has that feel to me.

I find myself still wishing I liked the cover. Again, nothing really wrong with it. I just don’t like it, but wish I did.

So what did everything on think of this issue? How do you all feel about the multi-issue Matrix Quest?