Welcome to issue 60. This has become a love / hate thing for me. I getting so interested in these stories, but with each issue I read, I’m am one step closer to the 80th and final issue of Transformers. I guess there is not much to do other that sit back an enjoy the ride. Issue 60 is just that. A ride with some new villains and a shaken Optimus Prime. Can the Autobots get their shit back together in time to stop the Decepticons? Will find out, but first lets check out this cover! 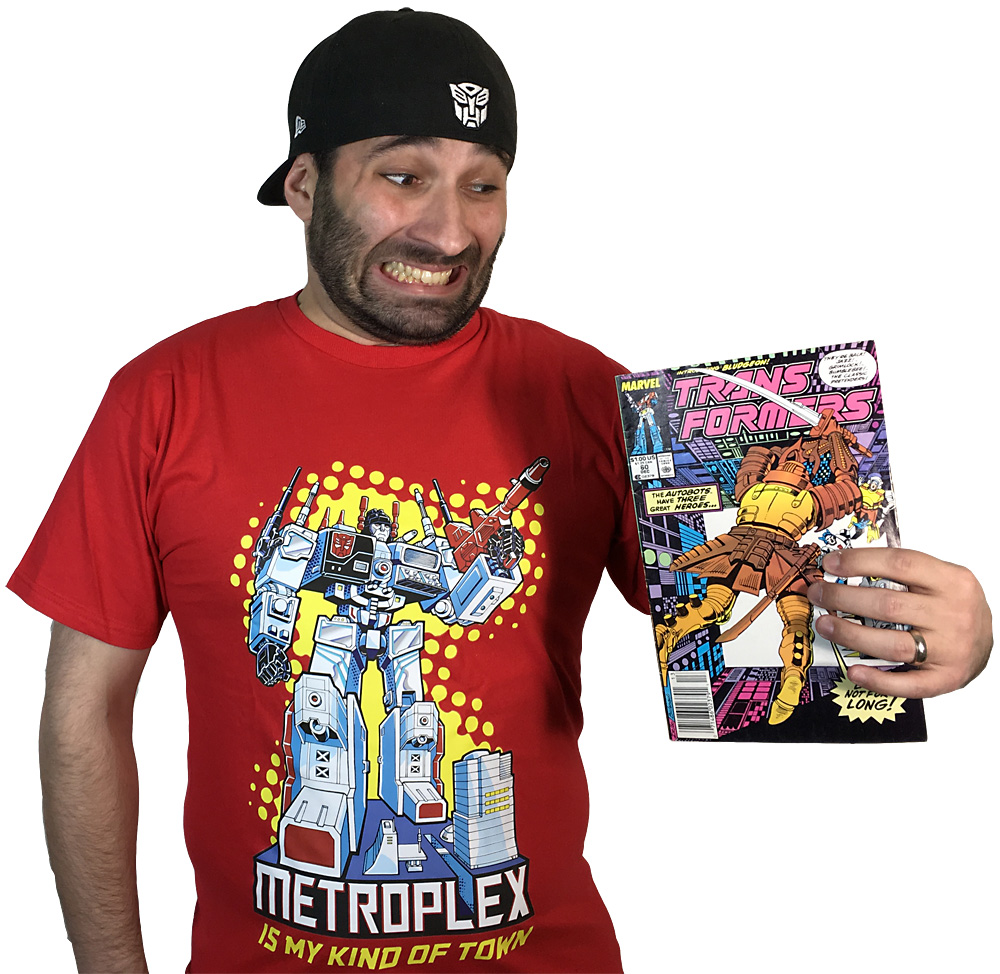 Bludgeon, a sword welding samurai looking figure is taking up most of the cover as he leaps down to Grimlock, Jazz and Bumblebee. The Autobots all have looks of supersize and terror on their faces. The walls surrounding everyone feel like a generic computer. Though this scene does not happen in the comic book, its not too far removed from what happens within it’s pages. “Introducing: BLUDGEON!” is written across the top above the logo. On the right side of the Transformers logo we read, “They’re Back! Jazz! Grimlock! Bumblebee! The Classic Pretenders!” and “The Autobots have three great heroes…” is written midway down the page and is finished at the bottom with, “BUT NOT FOR LONG!”. Bludgeon’s sword is on top of the logo giving it a 3D feel, but leaves me wonder if anyone really buys into a sword being able to cause any kind of damage to a Transformer. 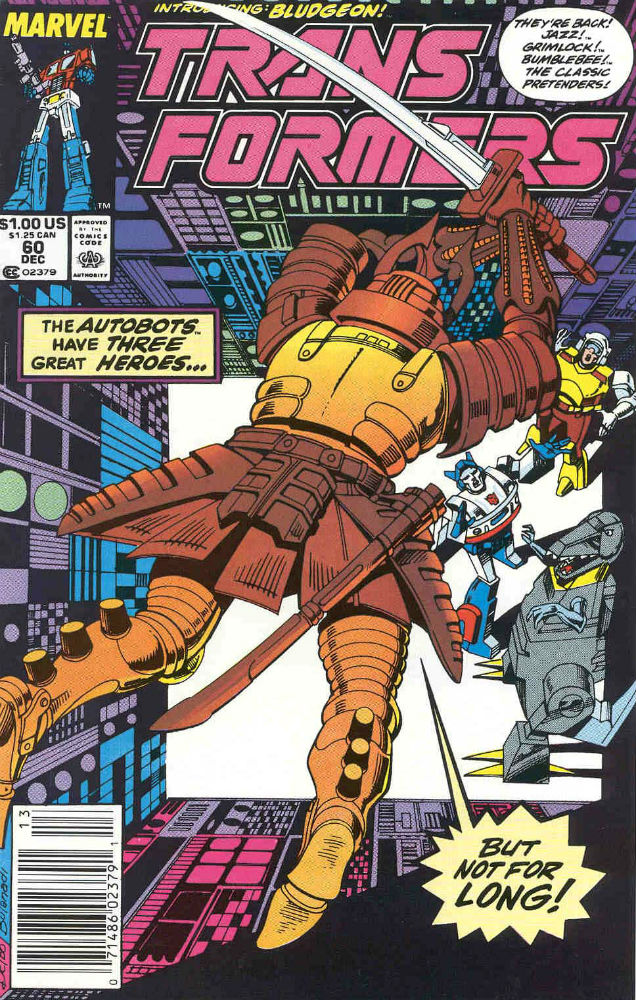 This comic starts off with a clearly depressed Optimus Prime on board the Ark listening to the ship’s computer going over all the recent dead Autobots. When Ratchet’s name is spoken Primes guilt boils over as he tries to make sense of what appears to be a loosing war with the Decepticons. The other Autobots on board the great ship are concerned over their leader’s current state of mind.

Things are going a bit better for the Autobot cause back on their home world of Cybertron where the Classic Pretenders, Rescue Patrol and Targetmasters have completed another successful fuel raid. Things are looking so good on Cybertron that several of these Autobots will be heading to earth to assist Optimus Prime.

The Autobots success does not go unnoticed by Decepticon leader Lord Thunderwing. He orders Stranglehold, Octopunch, and Bludgeon of the Mayhem Attack Squad to dispatch the Autobot Pretenders. 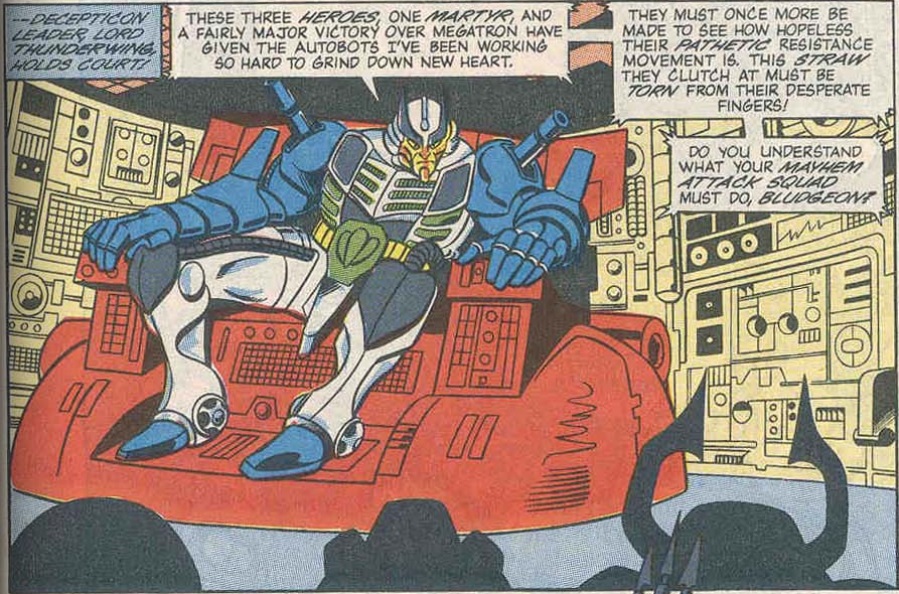 By now the Ark has landed on the Moon near Earth. Optimus Prime exists the ship to go on a walk so he can feel sorry for himself. The other Autobots on the ship grow increasingly concerned over their leader’s current state of mind. Hot Rod hatches a plan to snap their leader out of his current funk. The plan involves a Mark V Guardian drown going crazy, requiring Optimus to save the day. Unfortunately for Hot Rod, The Mark V Guardian actually goes crazy. 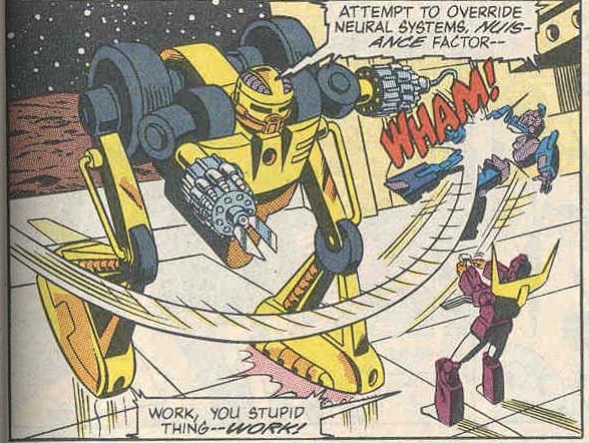 At this point the Mayhem Attack Squad are tracking the signal from their irradiated fuel the Autobots stole to the Council Chambers where the Pretenders and Rescue Patrol are getting ready to use the Trans-time Dimensional Portal to Earth. The Attack Squad bust in to the chambers and both the Autobots and the Decepticons are transported through the portal to an unknown location. 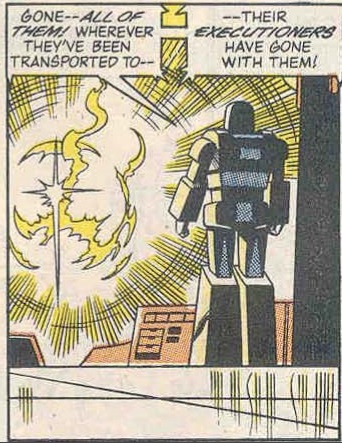 Back on the Moon, somehow Hot Rod’s horrible plan to snap Optimus Prime out of his defeated state actually worked. Prime destroys the Guardian bot and in the end promises to continue the good fight.

Now, as a result of traveling through the Trans-time Dimensional Portal, the Autobots and Decepticons end up in an oddly familiar tunnel. At the end of this tunnel they find themselves staring right into the face of Primus. 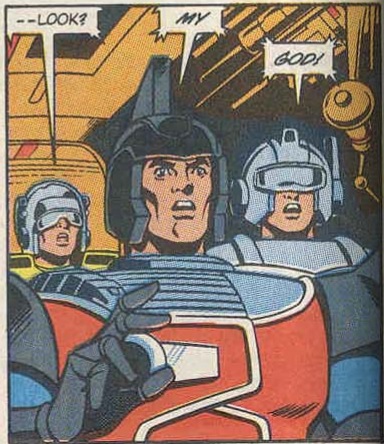 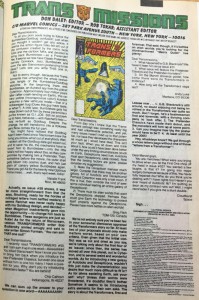 To all you poor souls trying to follow the Bumblebee/Goldbug confusion: just when you thought it couldn’t get any worse, it seems the action figure folks felt left out of the confusion created by the comic book folks and the cartoon folks, and decided to bring back Bumblebee-as a Pretender! Yes, it seems we now have Classic Pretenders, namely Grimlock, Jazz, Bumblebee and even the late Starscream (pretending to be dead? Let’s see you write THIS one in, Bob!)

Not to worry, though, because this Transformerite has untangled the whole twelve mile tangle of the Bumblebee/Goldbug storyline. In the beginning there was Bumblebee, and Autobot spy from the planet Cybertron. Approximately four million years later (after crash-landing on Earth), this canary yellow (inconspicuous color!) Autobot acquires a new vehicular mode-that of a Volkswagen bug )Does this guy have taste, or what?). A little later, Bumblebee gets his chips blown out bof him by those paramilitary punks known as G.I. JOE. Still no problem up to here, because –with Ratchet’s help –he’s re-built as Goldbug. Despite this change, he still transforms into a Volkswagen! Now comes the fun part.

You might have noticed that Goldbug hasn’t been fixed since Starscream blew the living you-know-what out of everybody Well, I reckon all the Goldbug data god wiped out, and to save his life, the mechanics have to revert him to Bumblebee –only the little feela’s not to happy about this, so they compromise by making him a Pretender. Then, sometime before the movie, his outer shell gets blown into cosmic dust, and he’s just plain ol’ canary yellow Bumblebee again. There you go! As for the twenty mile Optimus Prime mess… well, that’s next week, folks!

Actually, as issue #59 shows, it was far more straightforward than that (he says, filching, ready for the hordes of outraged letters from baffled readers). It seems Ratchet was very really happy with his Goldbug design, and decided –when Megatron inadvertently game him the opportunity –to change him back to Bumblebee. These surgeons are just so fickle! As for the return of Starscream, veteran TRANSFORMERS writer Bob Budiansky smiled smugly and said to new writer Simon Furman, “You can sot THAT one out!”

I recently read TRANSFORMERS #50, and I can sum it up in one ward –AAAAAHHH! You killed Starscream! Now I know you have to bring him back when you introduce the new Pretender Classics, but even one issue without him is one too many. I have a question for you. Why don’t you try introducing characters faster? You are behind!

Actually, as issue #59 shows, it was far more straightforward than that (he says, filching, ready for the hordes of outraged letters from baffled readers). It seems Ratchet was very really happy with his Goldbug design, and decided –when Megatron inadvertently game him the opportunity –to change him back to Bumblebee. These surgeons are just so fickle! As for the return of Starscream, veteran TRANSFORMERS writer Bob Budiansky smiled smugly and said to new writer Simon Furman, “You can sot THAT one out!”

I recently read Transformers #50, and I can sum it up in one word –AAAAAHHH! You killed Starscream! Now I know you have to bring him back when you introduce the new Pretender Classics, but even one issue without him is one too many. I have a question for you. Why don’t you try introducing characters faster? You are behind!

We can sum up the answer to your question in one word –AAAAAAAAHH!

From day one I know that the Transformers concept was something really big and had unbelievable potential, and yet, many issues haven’t lived up to that potential, nor have they developed the characters as much as I would have liked. This isn’t your fault. When you sit down and think about it, how could it have been done better under the very limited circumstances (stuck on Earth, Decepticons need fuel , Autobots must stop Deceipticons, case closed). Now that the limited factors are gone, please consider my suggestions:

We’re not entirely sure you’ve been fair in your somewhat dismissive appraisal of the Transformers story so far. At least two of your proposals would only make matters worse, based on your own criteria. Even given that the initial conflict was as cut and dried as you say. We’re talking only about the first four or so issues: since then , the series has moved all over this planet, out to Cybertron, and to several weird and wonderful worlds. As for introducing a new galaxy of Autobots and Decepticons, wouldn’t this just make the characterization you desire that much more difficult to fit in? As for aliens assisting Earth, as yourself: why? Unless their worlds were threatened, it’s doubtful they’d bother. Somehow it seems to be introducing extra elements for their own sake. The story is about the Transformers, first and foremost. That said, though, if it’s battles on alien worlds you’re looking for, the aforementioned “Matrix Quest” has plenty

Lessee now… 1. G.B. Blackrock’s still around, no doubt enjoying not being involved in the Transformers war quite so much. Don’t forget, he’s a businessman first and foremost, with a thriving company to look ater. 2. The Pretender Classics have made their debut, and the monsters will turn up at some point. 3. Can you imagine how big the poster would have to be?! 4. At least until the year 2005!

Hey, whatdaya know? We got through a whole letters page without one of those “Letters from a Transformer”!

You are merciless! What were you trying to prove when you let the First One chop off my head in issue #53? You wanted a few laughs, is that it? I’m going into major surgery tomorrow because of this. You never fully repaired me! Who do you think you’re dealing with? I have rights too! Haven’t you ever heard of Autobots’ lib? I’m quitting as soon as my contract runs out! Well, I might reconsider if you give me a stunt double.

I feel like the cover is the best render, in this whole issue, of Bludgeon. And we’re not even seeing his front side. So it kind of makes for a kool cover, but I was kind of bummed out over the other drawings of him in this book.

In general we have a good story here. I could have gone without Optimus Prime having a pity party for himself. For now, I’m going to blame that on the fact this is Powermaster Prime and not my Optimus Prime.

I am quite interested in how Simon Furmon is going to handle God and Religion in this comic going forward. He must have through it out or he would not have brought it up. It will be interesting to see in the coming issues.

For the first time ever, I find myself more interested in whats going on with the Autobots on Cybertron than on earth. Mostly because Prime is being such an emotional wreck and not how I know Prime to be. It’s so out of character from my point of view that all the pages with him just pulled me out of the story to ask; What the fuck?