With the failed mission of the last issue, 54 brings us back to Earth with new action figures that Hasbro wants kids to buy, the Micromaster Transformers.  What are the Decepticons up to this time and what are the low number of Autobots going to do to stop them? We’re going to find out, but first lets check out this issue’s cover. 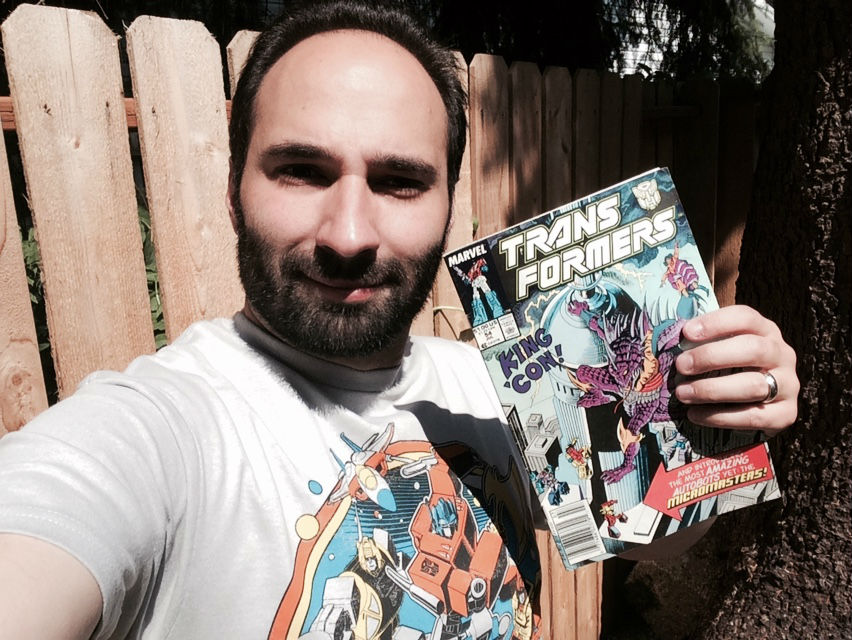 Grab A Great Transformers Shirt Like Mine From 80sTees.com

I have two impressions of this cover. The first one is positive the second, not so much. At first you see Iguanus climbing the Empire State Building with a human in his claws much like the original King Kong movie. To make sure you didn’t miss that reference the words “King Con!’ are written in dark purple. Overhead you can see a lighting storm covering the city. Its a cover with a lot of energy, that I find to be pretty accurate to the story we are about to review inside. 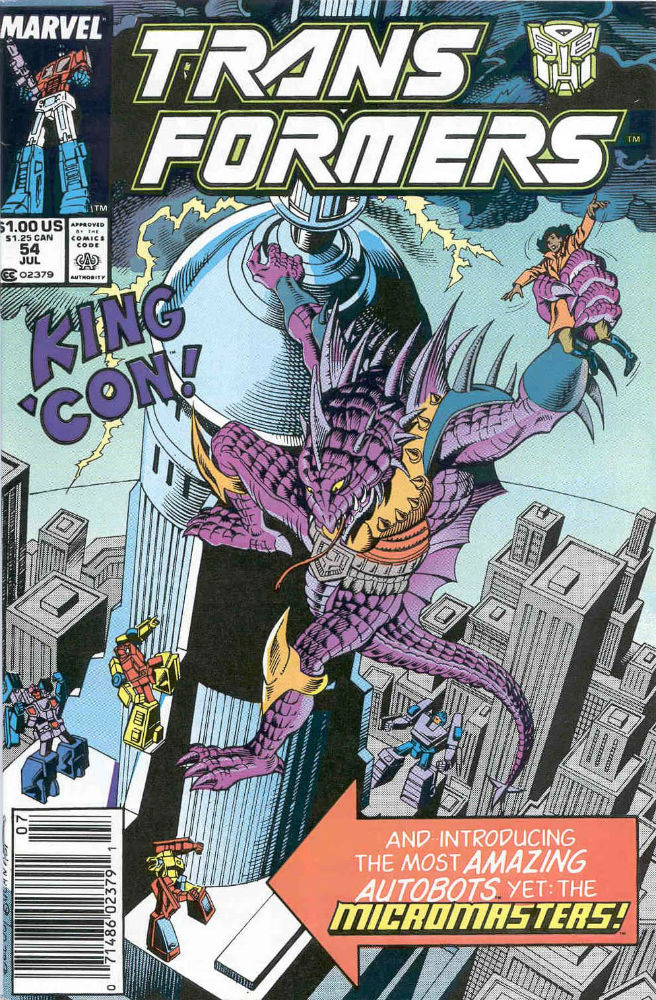 My second impression starts to settle on me the longer I look at the cover. Why don’t Transformers look like Transformers anymore? Why do they have to look like monsters or micro-machines? I miss the core group of Transformers fighting on earth trying to survive. That original idea still has plenty of room for stories to be played out. But nope, the writers have gone with a giant lizard looking robots or perhaps it was mandated by Hasbro. Lets see where this story takes us.

Issue 54 has a gritty start. Three  hunters head into a New Jersey swamp in the middle of the night to dispatch a mysterious creature that has been reported within the community. The hunters expected they would run into a bear or some other such animal. What they end up running into is a Decepticon Pretender known as Iguanus who actually blows the hunters away with his hurricane air blaster. The three men tear out of there as fast as they can. 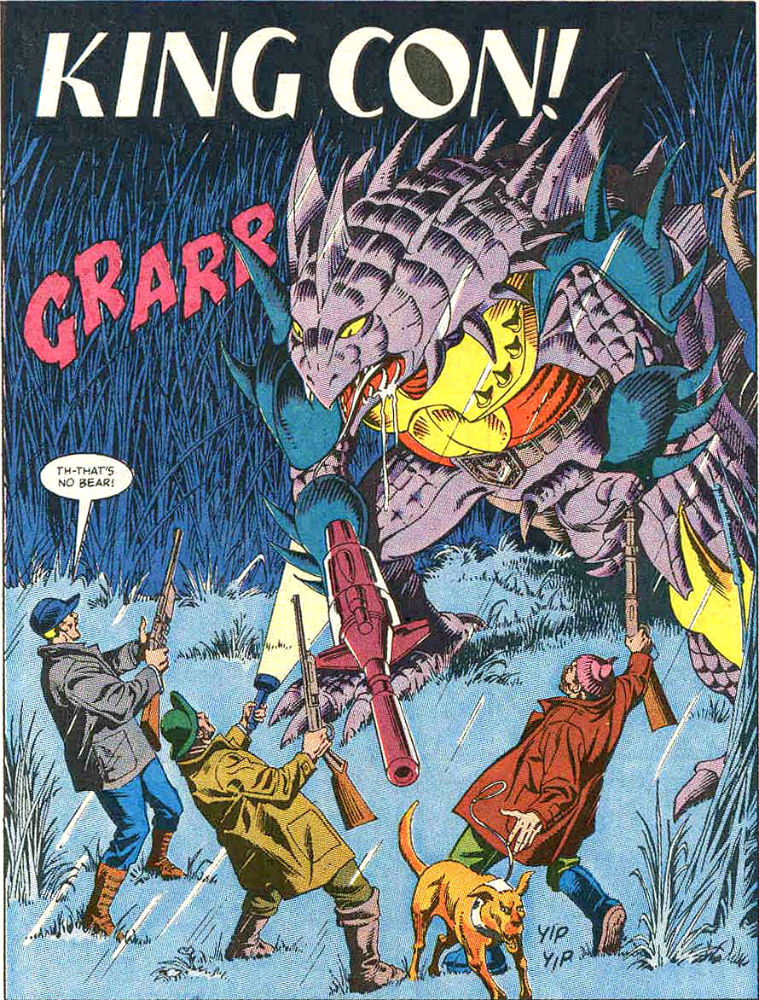 Days pass when Optimus Prime and Hi-Q pull into a gas station to receive backup. The Autobots of earth put in a request to Cybertron to send help. Through the of Trans-Dimensional Warp technology reinforcements arrive in the way of Micromasters. After Hi-Q expresses his concerns over their size, Optimus Prime gives the Micromasters their first mission.

Optimus Prime tells the Micromasters about the creature sightings that have been reported on the news in New Jersey as well as some odd weather phenomena occurring around Manhattan and New Jersey swamplands. The fear Prime has is that these two things could be the result of Decepticon meddling and thus the Micromasters are off to investigate.

At this point in issue 54 we are introduced to Cecilia Santiago, a reporter, who has interviewed the New Jersey hunters and has now started to enter the swamp lands in hopes of finding and exposing this mysterious monster. 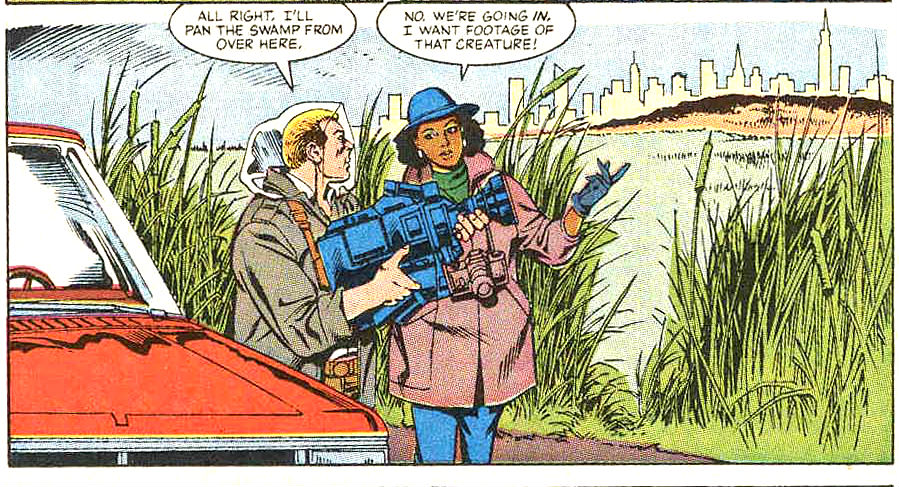 Next, we are brought into the new Decepticon underground base in New Jersey. Scroponok is planning the ‘cons next plan for gathering energy with the Pretenders. A massive energy conversion device has been built within their base as well as a Stormmaker Station in the nearby swamps which is responsible for the current weather problems. Scorponok wants to collect the electrical power created by the storm he has caused. 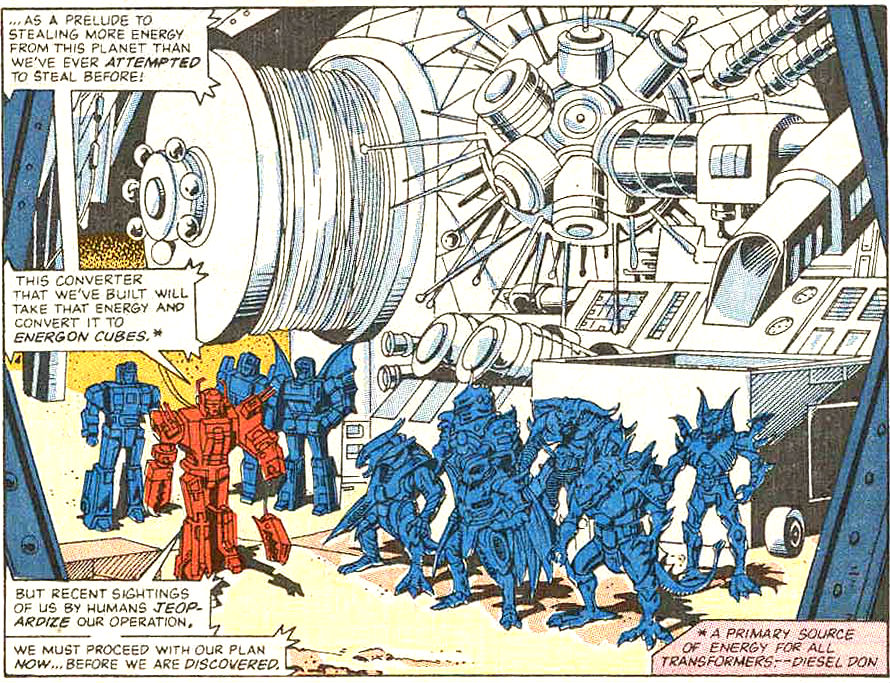 Skullgrin is on guard duty near the Stormmaker while Finback and Submarauder lay cable underwater from the Decepticon base to Manhattan so that the power absorbed from the storm can be brought back to their base. Iguanus has to place their electrostator device at a place to act as a lighting rod to gather all the electrical power of the storm and have it channeled through the ground to the conductor cables. To keep Iguanus from becoming electrocuted, Bugly and Bomb-Burts are in charge of retrieving him before that happens. Before they all depart on their missions, Skullgrin gets teased by Iguanus for being a human lover.

We cut back to the swamp where Cecilia is overhearing the Decepticons’ plans near the Stormmaker station. She tries to exit the area, but ends up  making some noises and as a result is captured by Iguanus. As the Decepticon Pretender readies her termination, Skullgrin tries to talk Iguanus to hand over the women to him. A fight between the two soon breaks just as Mudslinger appears. He and the other Off Road Patrol team take on the two Decepticons which allows Cecilia to run off to find safety. Race Car Patrol gets a radio communication from Powertrain to intercept the human in case she has any useful information. 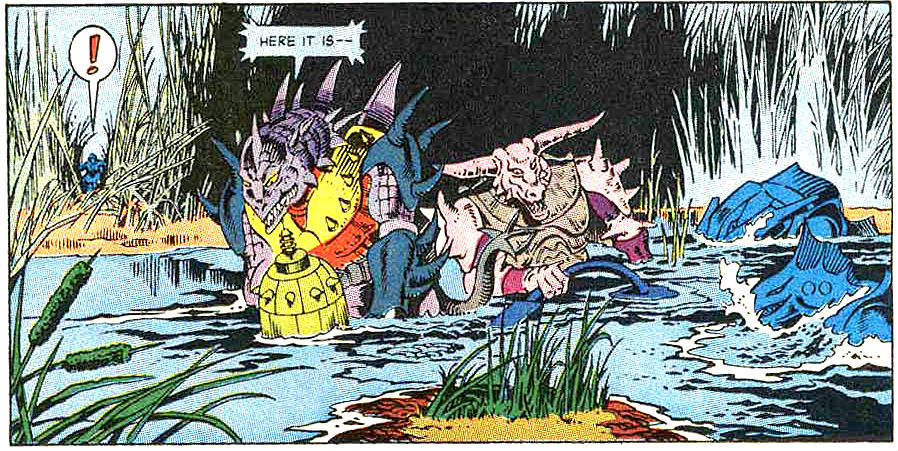 Cecilia is picked up by Roadhandler. She quickly realizes that the person in the driver’s seat is a manniquin. Roadhandler starts to speak to her and convinces her that he is a good guy. Feeling a bit more at ease, Cecilia, tells Roadhandler what she over hears about the Decepticon threat to New York City. 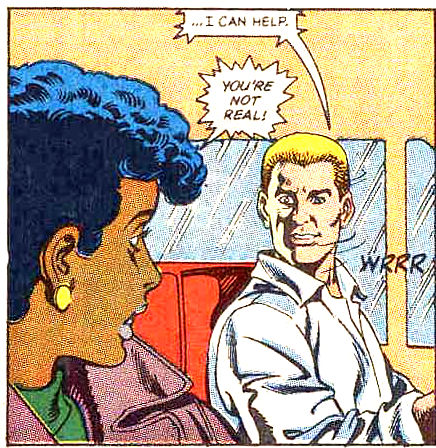 Continuing on with his plan to place the electrostator atop the Empire State Building, Iguanus leave the swamp and heads for the city. The electrostator will allow the the energy from a lighting strike to be sent down through the building and out through some conduit cables which Finback and Submarauder placed by the river. Success of this plan will give the Decepticons a huge amount of power, but it will also lay waste to half the city.

The off Road Patrol at the swap are able to delay Skullgrin just long enough for Mudslinger to destory the Stormmaker. But there efforts are to late as the storm by this point has grown too strong and can’t be stopped 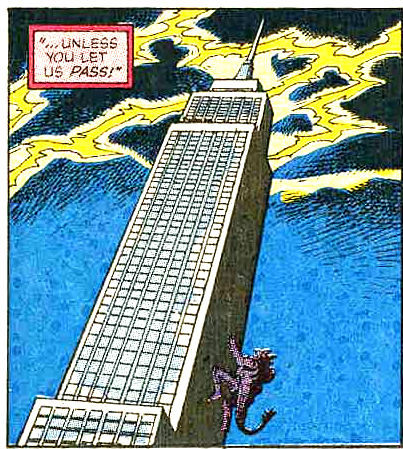 The Race Car Patrol race into the city with Cecilia and make their way to the top of the Empire State building where Iguanus grabs the women with his tail and holders captive high above the city streets in a King Kong like fashion. She is eventually dropped and falls into Roadhandler’s arms while at the same time he enables the electrostator on top of the sky scraper. Next, Roadhandler uses his projectile fist and is able to knock lose the electrostator from the building. Iguanus leaps out after it and misses. The lightnight strikes down from above and all that electrical energy is channeled through Iguanus’ body frying him. Our Micromasters decide to make New York their new home for the time being. 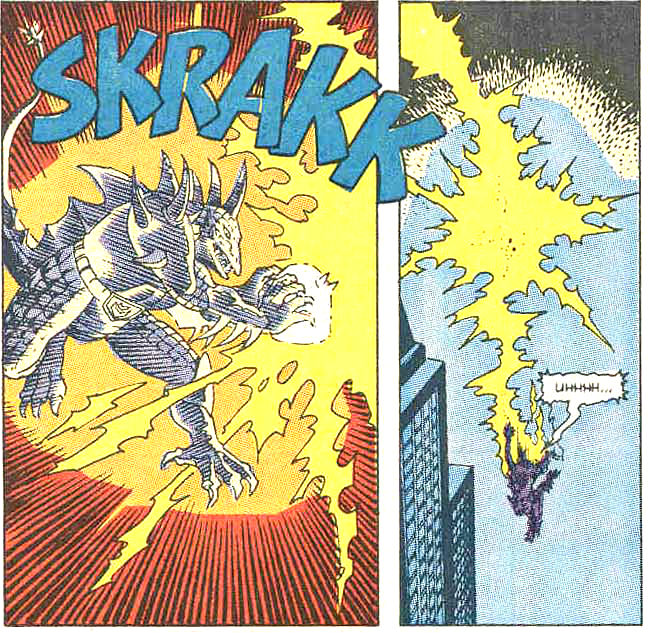 I swear, I start each issue forgetting that Prime is a Powermaster and I’m disappointed every time I see his red eyes and over accented body. It’s like he is walking around in some over powered exo-suit.

I’ve had some time to really think about this issue. It’s thick and wordy. Which isn’t always a bad thing, but I don’t think it works for this issue. Now, when I sit back and think about the story and simplify it in my head it’s not all that bad. It’s execution just didn’t work and that, in part, has a lot to do with all the Transformers introduced in this issue. The drive to sell toys hurt the story I think.

Had the story just been told without all the introductions and forcing everyone to show off a personality, I think it would have played read a lot better.

I noticed that the gas station in this issue was called ‘Peoples Gas’ and not, G.B. Blackrock gas. It stuck out to me a lot when I saw that. Perhaps it’s because this issue takes place on the East coast?