Issue 55 is Budiansky’s last for Marvel’s Transformers. Does he go out with a bang or is he so bitter that you can read his thoughts between these 30 year old pages? You decide. But first, lets check out this cover. 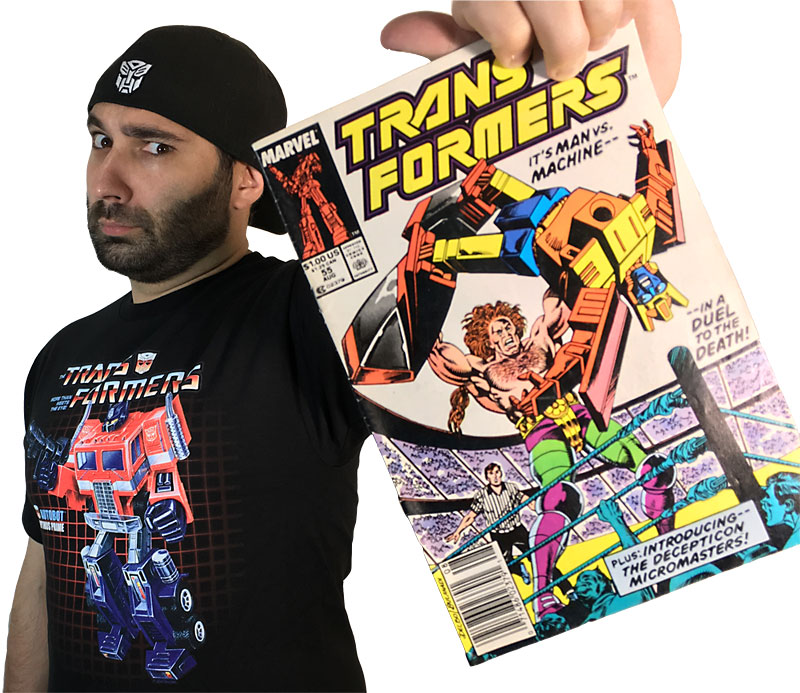 Like my Transformers Shirt? Get your own from 80sTees.com

Front and center here we have a crazed looking wrestler in pants (or tights) padded out like something a football player would wear. The image really throws me off and makes me think that maybe this is a wrestling match that might take place back on the Cosmic Carnival. Off to the side we see the ref of this bout watching intently. All of this is taking place in a very large stadium with many spectators. “It’s Man vs. Machine – in a Duel to the Death!” written in basic black on the cover’s white background. A tag line for this cover which is not true. “Plus: Introducing – the Decepticon Micromasters!” is written along the bottom within the box. 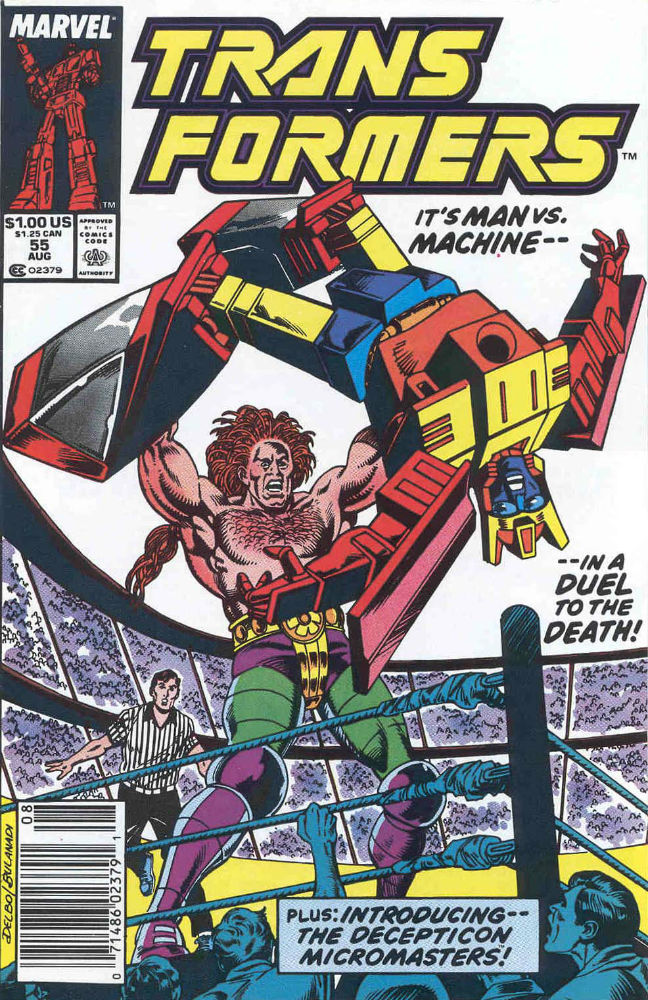 We kick off Bob Budiansky’s final written issue with Roadhandler  as a guest on Cecilia Santiago’s TV show. During the interview he talks about the events that have taken place over the last several weeks. Roadhandler and his other Micromasters have pretty much just been ignoring Optimus Prime, who is floating around in orbit, and started to take a strong stance when dealing with evil humans. He and his followers have been spending their time taking down the different criminal elements in and around Manhattan and as a result winning over the public. 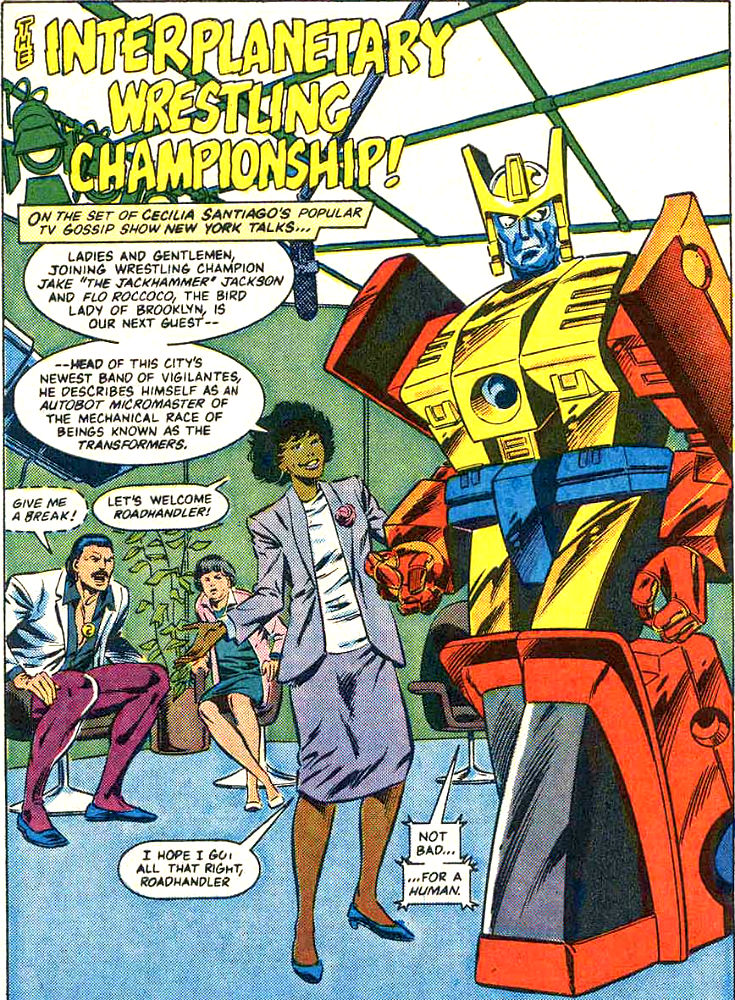 Another guest on Cecilia’s same show is a local wrestling star by the name of Jake “The Jackhammer” Jackson. He gives off the impression of not being impressed by Roadhandler one bit and challenges the Autobot to a wrestling match in the ring. Roadhandler, not one to turn down a direct challenge, accepts. Only after the interview does Roadhanlder learn that wrestling in general is a fake sport. Jake’s challenge to Roadhandler was merely for the attention and publicity it would attract. Understanding this, Roadhandler can’t shake that his honor and pride where challenged and he will not back down from the wrestling match.

The very next day Roadhandler arrives at Arnie’s Gym to practice with Jake. He does not arrive alone however. Along comes Swindler who is acting as Roadhandler’s manager and Free Wheeler taking on the role of his bodyguard. Jake soon learns that it’s not easy to body slam an Autobot. Roadhandler assists Jake by leaping into the air to assist Jake in Throwing throwing the Autobot through the center of the wrestling ring. 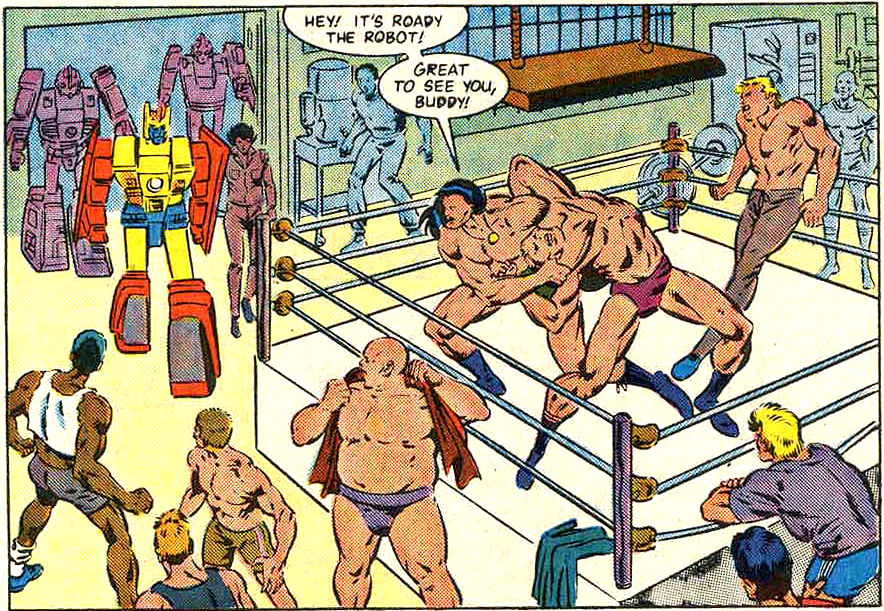 It’s not long before the Match for “Interplanetary Wrestling Championship of the Universe” is set up. At the start of the match Roadhandler and Jake go back and forth with each other trading moves. In classic over the top wrestling style, Jake The Jackhammer literally pulls out a fully functional jackhammer and attacks Roadhandler. But it is soon destroyed. Then during the assisted throw trick, Roadhandler is flunk out of the ring. Thinking quickly, Roadhandler transformers into vehicle mode and quickly gets back into the ring to pin down his opponent. 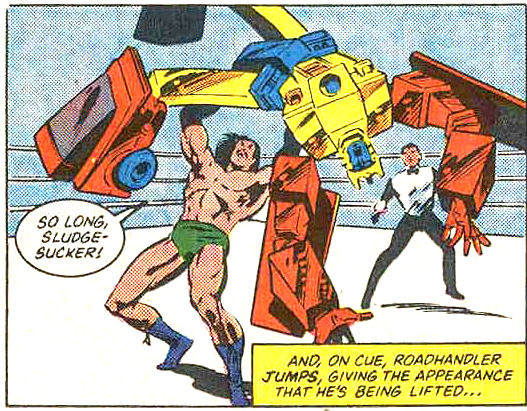 As the crowed files out of the venue, we follow a well dressed man as he makes his way to the docks where he is met by Submarauder in his alt mode. It’s Lord Zarak! He is taken to his robot bodym where he joins with Scorponok has a message sent to Cybertron requesting reinforcements. 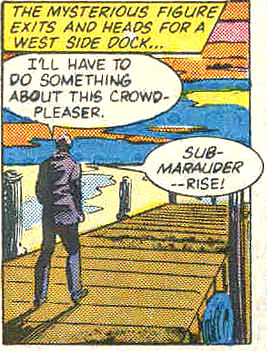 As weeks go by, Roadhandler is just killing it in the wrestling ring as he continues to chalk up wins. The attention he has gotten from his wins is used as a platform for him to educate the public on Autobot values and honor. Roadhandler takes special notice of some local kids who make up his personal fan club, and even goes as far as teaching them self-defence. All part of his encouraging speeches which he hopes will allow humans to stand up for themselves and take part in cleaning up the streets. 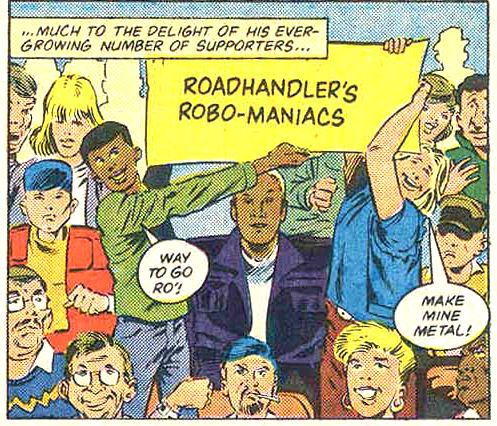 After a while, Roadhandler is greeted by Lord Zarak and his new wrestler, The Decpeticon Micromaster, Air strike Patrol. Zarak is convinced that the popularity of the Autobot Cause is going to be a threat to many innocent lives if Roadhandler doesn’t back off. Lord Zarak is able to convince him to meet Storm Cloud in the wrestling ring for a public match. Cecilia doesn’t trust Lord Zarak and comes up with a backup plan with Swindle. Just in case.

Roadhandler realizes that his human friends will always be in danger from the Decepticons and announces to the audience that he is resigning from the wrestling.

My very first thought is that the cover is rendered pretty well, but the wrestler in the comic that spars with Roadhandler, doesn’t look anything like the wrestler on the cover. The cover in general is misleading. Which is annoying. A good looking cover that implies this wrestler actually could be hurting this Transformer, but the story proves it all to be a lie. It does grab my attention and when you’re trying to be the cover of a comic book on a shelf with several other comics all fighting for your allowance money. I bet this one got a few kids to buy this issue of Transformers over other comic books they had in front of them.

The story felt loose, but by no means the worst Transformers comic I’ve ever read. I actually quite enjoyed the bit where Roadhandle described his work on earth stopping normal every day crime. I like that in comics. You don’t see Batman or Superman doing that very much these days..

This is Bob Budiansky final issue. I have heard it said that a lot of what Roadhandler says in this issue where Budiansky’s own thoughts and frustrations working on this comic. You might be able to actually take the whole book that way. If that is true it’s a very interesting read from that perspective. I’ve never located anything on-line that indicates that this was Budiansky’s approach for this issue. Take it for what you will.

What did you think of this issue? Did you like it or hate it? Lets chat about it below in the comments.

This is Bob Budiansky’s final issue as writer. Although he is replaced by British author Simon Furman (a fan favorite scribe) the very next issue-on Budiansky’s recommendation, aficionados such as myself should be more frequently reminded of Budiansky’s awesome contribution to the canon: from effectively translating the establishing Jim Shooter’s vision for the line, to establishing the iconic characterizations of a host of transformers in the toys’ Tech Spec biographies, his influence upon the license was profound.

Content Note: It should be mentioned that “The Interplanetary Wrestling Championship!” was penned as a result of Marvel Bullpen members attending wrestling matches in NYC in the late ’80s. These staffers shared their anecdotes with each other at work, and Budiansky overheard these stories then incorporated them into this tale.