Now that we are done with whatever the hell issue 43 was about, we return to the main story line of Transformers. Back to Optimus Prime and the Steelhaven and their future. But first, lets check out the cover to issue 44. 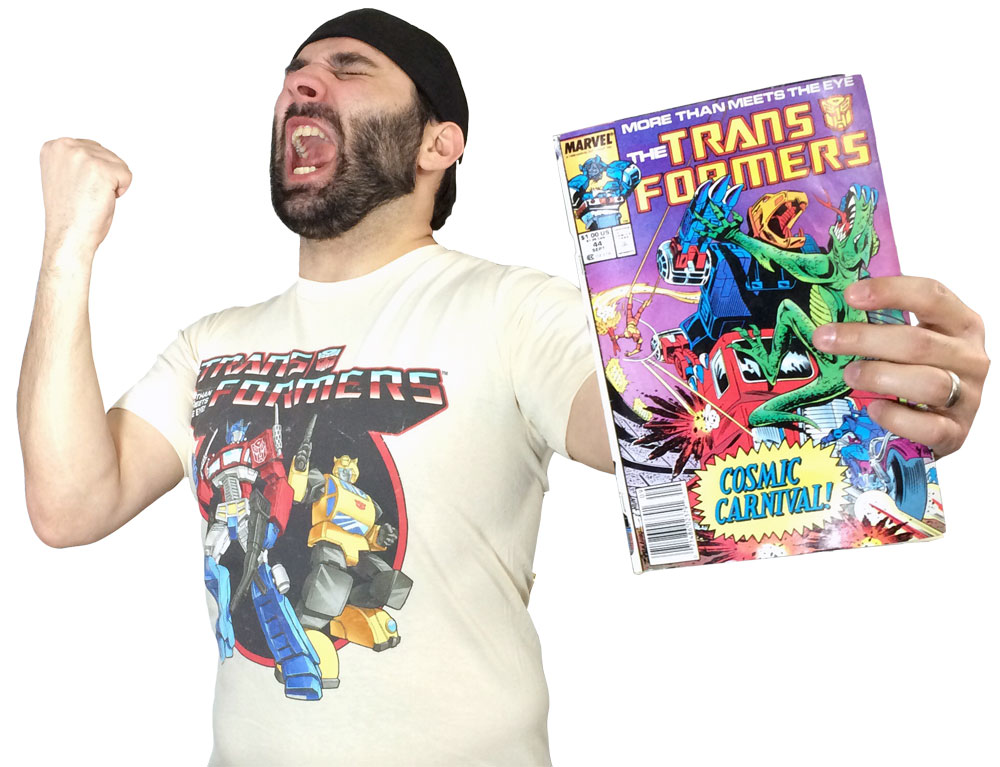 Dress For Success With Optimus Prime and Bumblee From 80stess.com!

This cover is solid. Which is great because we need one after issue 43. Optims Prime, in truck mode is front and center on the cover, along with Sky Lynx on top of his cab. The two Autobots are fighting off a large lizard while in the background a Trapeze artist who is hurling fire and a rocket motorcycle are attacking from behind. The art is top notch in my opinion. “Comic Carnival!” is displayed in blue writing  inside yellow word bubble. This issue is looking good from the cover. 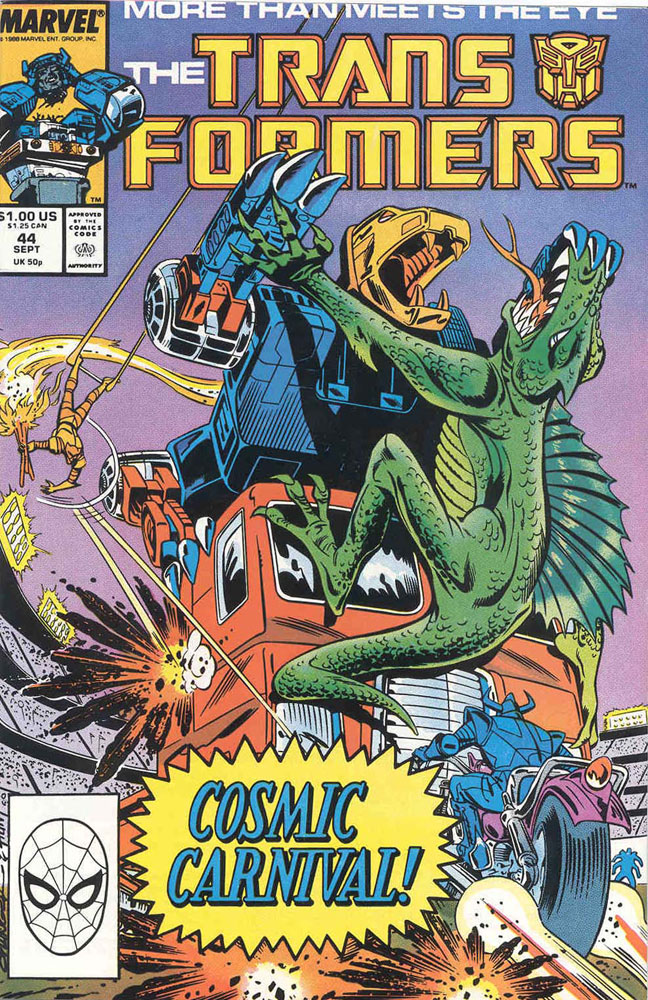 On board the Steelhaven, Optimus Prime and his crew are headed back to Earth when they observe a Laser-beamed advert for “The Cosmic Carnival”. Prime has no interest in seeing the show until the advert displays images of Sky Lynx as one of the shows many attractions. Cautiously, Optimus Prime changes course to check out the carnival. 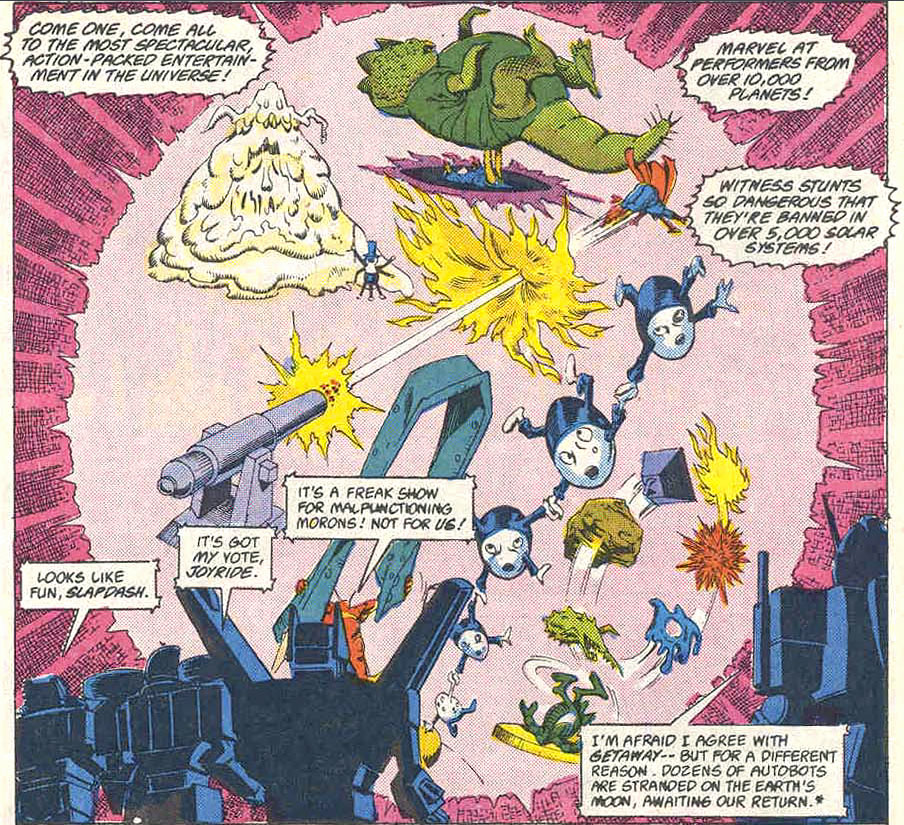 Inside the Carnival ship, Optimus Prime and Goldbug start searching for Sky Lynx when they fine four children from earth being displayed as a sideshow attraction. When Goldbug attempts to rescue the children an energy field around them throws the Autobot back violently. At this point Optimus Prime demands that Berko, the children’s handler, take him to see the carnivals owner. Prime and Goldbug are taken to meet Big Top, who refuses to release the children due to the contract they signed which makes them pretty much slaves until their debit is paid off. A debt they uncured when they the children and Sky Lynx stopped to see the carnival. 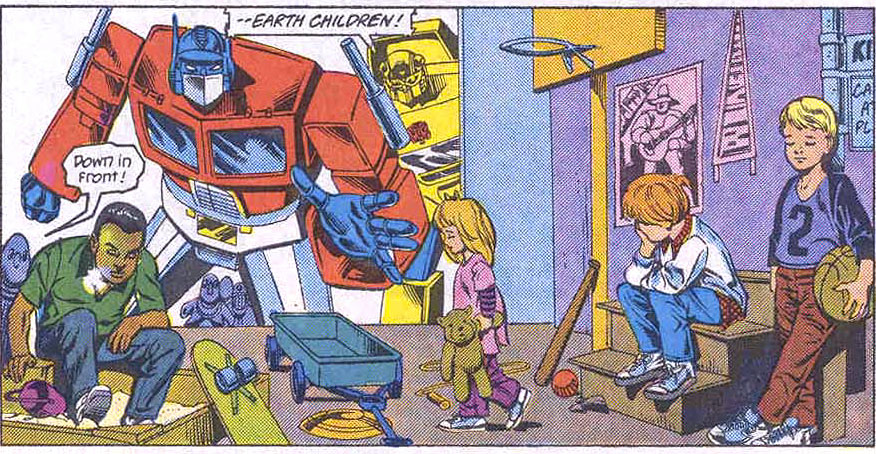 Big Top is not a total jerk. He gives the Autobots two free passes to view the main event of the carnival. It is during this even that the Autobots see Sky Lynx for the first time during his act. After the show they meet up with him back stage where Sky Lynx tells his story about how the kids wanted to stop off at the cosmic carnival after escaping from the Dinobots a few issues back. When they could not pay for their tickets, Sky Lynx signed on as a performer to pay off his debt. The kids and himself have been suck in the carnival ever since. 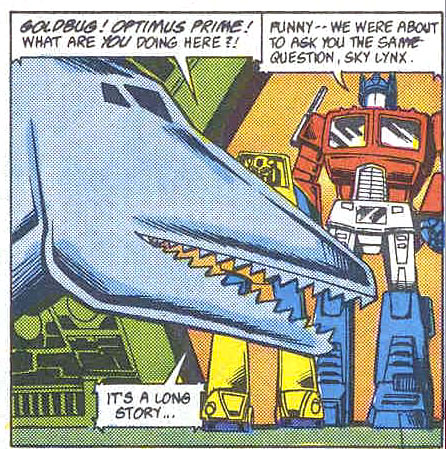 Optimus Prime and Goldbug are unable to think their way around the contract so they reluctantly say their good-byes to the children of earth. Berko confronts them again and tells his back story. He is an abductee, brought on board the carnival. Eventually he became trusted by Big Top and work his way out of the side show attraction. It comes down to, as long as the kids are in the side show, Berko stays free. 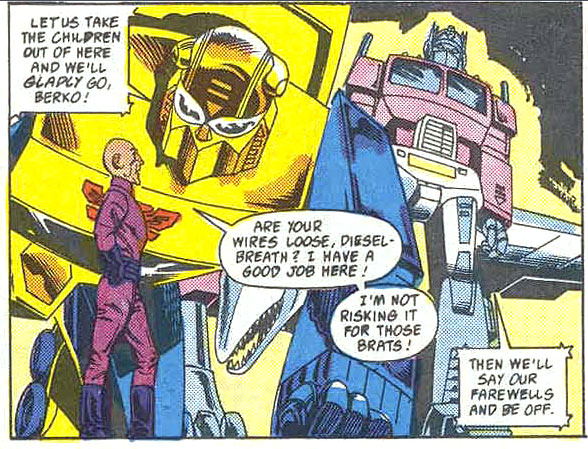 Berko, who has been on his own most of his life, is taken aback when Optimus Prime offers to help free him and take him back to earth. With this Berko changes his stance with the carnival. He helps arrange to free the children while Optimus Prime is sent out to collect Sky Lynx from the arena just as his next act is starting. 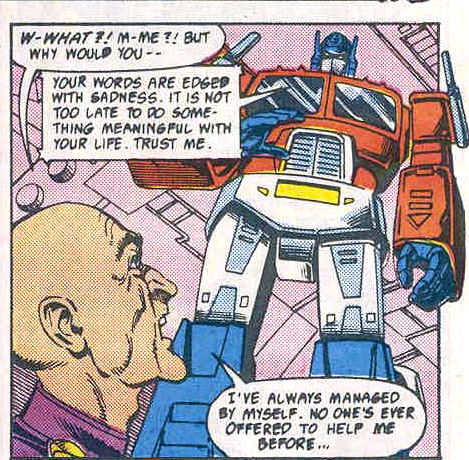 As prime and Sky Lynx try to escape, Big Top sends out other performers to block their way. They make their way past jugglers and rocket powered motorcycles, and through the exit. 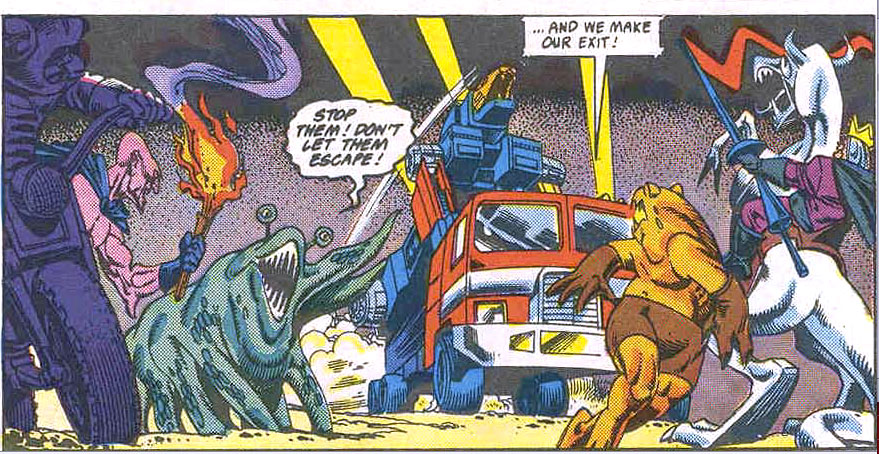 By this point Goldbug and Berko have freed the children. Goldbug and Big Top get int a fight that results in Goldbug ramming Big Top into a cage. This leaves Big Top as a sideshow freak attraction and the Autobots and children leave for Earth.

I honestly didn’t think this was a bad issue. Not my favorite, but also not my least favorite. It felt like a villain-of-the-month issue that also helped get the story back on track of tying up some loose ends.

Berko is a questionable name for a human male. I have never heard it before and seems overly obscure for no reason. The art was so much better than issue 43.

Prime looked like himself and not Powermaster version we saw int he last issue. Which I am not complaining about. But, one has to wonder where the hell his trailer was this whole time. Regardless, its so nice to see old school prime back and kicking ass.