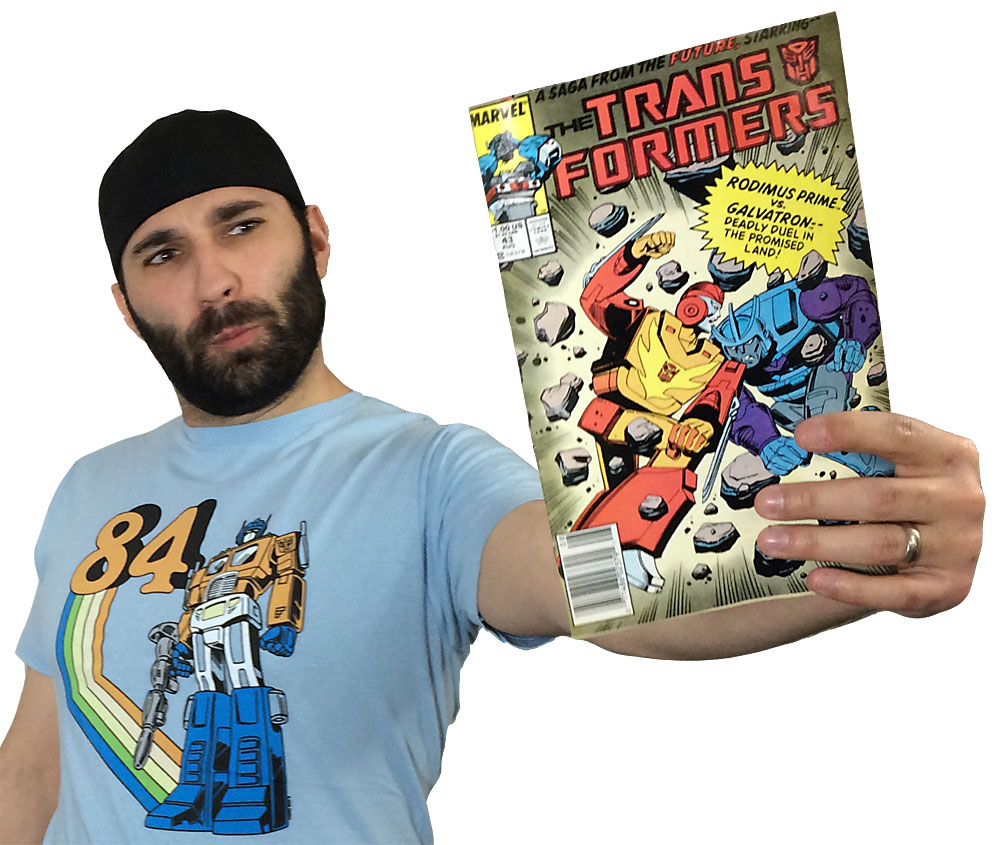 The brown cover features Rodimus Prime and Galvatron fighting each other around exploding rocks. “Rodimus Prime. Vs. Galvatron – – Deadly Duel in the Promised Land!” is written above their heads with a yellow (ick) background. At first glance this is an exciting cover for a couple of small resins. For Transformers fans you are seeing Rodimus Prime and Galvatron fighting it out. The first time these two characters have been seen in comic book forum. I can imagine a fan following along seeing “Rodimus Prime” written on the cover thinking what?!? We just got Optimus Prime back, now we are in the future with Rodimus Prime. Does Optimus Prime die again like in the movie? urgh! It’s all very confusing and a little frustrating. 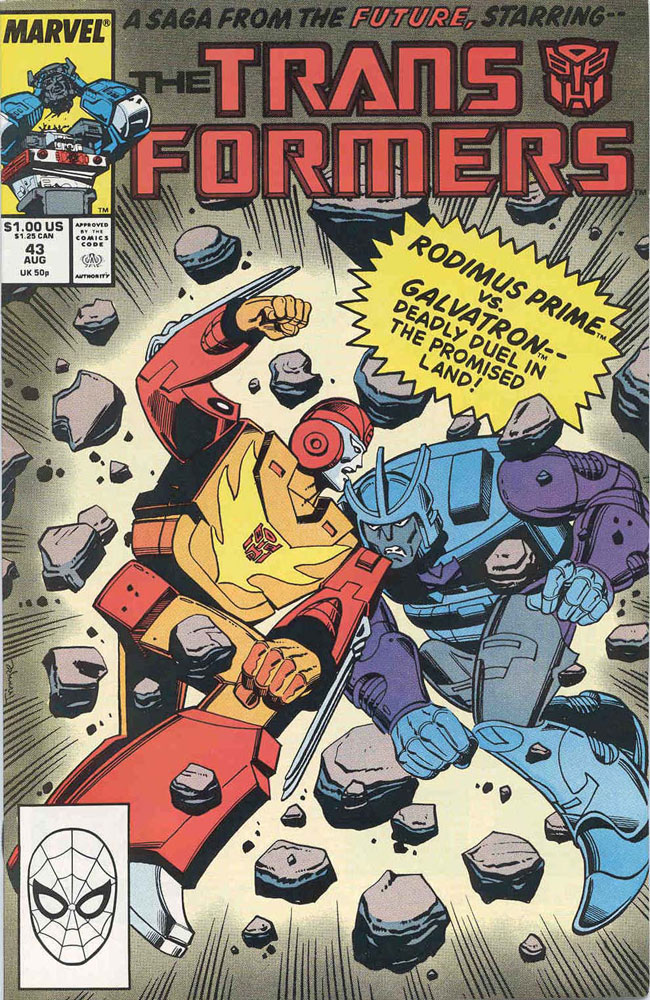 On second look at this cover it quickly falls apart for me.  Both Rodimus Prime and Galvatron are rendered poorly. I can’t understand why drawing Transformers continues being an issue for Marvel. I mean animators have been creating the cartoon for years. The movie came and left the cinema a while ago. How can there still be issues drawing these characters? Yet, here we have it. A cover that shows two poorly rendered, well known characters. What gives?

Ok, so, lets jump right in because that’s what this issue does to you as a reader. A race known as the Quintessons are sending out a squad of Sharkticons to the planet of junk in search of a mysterious container. The Sharkticons locate this canister and quickly lose it while be chased off by the Junkions. 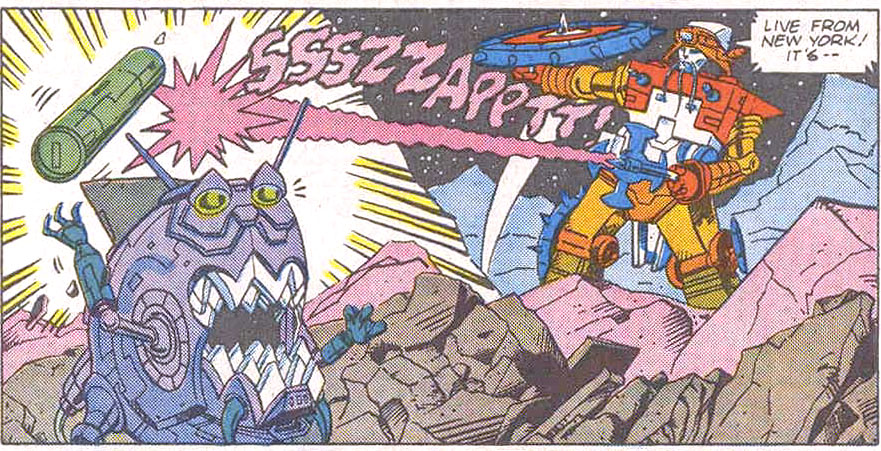 The Quintessons, who are not ready to give up yet, start to monitor the Junkions in hopes of figuring out a new plan to get the canister. They learn that the Junkions’ life revolves around Earth broadcast television and organizing their planet of junk. It is here that we also learn that at one point in history the Quintessons where once the rules of Cybertron.

The Autobots, here lead by Rodimus Prime and helped by Ultra Magnus, hear of a disturbance on Junkion and investigate. The Decepticons, lead by Galvatron and aided by Cyclonus and Scourge hear about happenings on Junkion, but Galvatron whats no part of it. 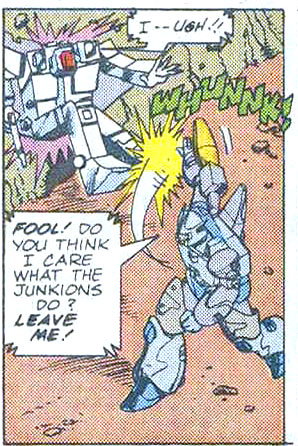 The Arielbots battle the Quintessons and despite being told not to go to Junkion, witness this event. The Quint transmitter becomes damaged and the Junkions are instructed to share the broadcast with the galaxy causing an all out war resulting in the galaxy coming to the source of the signal.

Galvatron ends up traveling to Junk because of the signal and fights Rodimus Prime. It is Blaster who defeats the signal. Galvatron continues to try to not only fight the Autobots now but the Junkions. In the end he ends up running away on Blast Off. 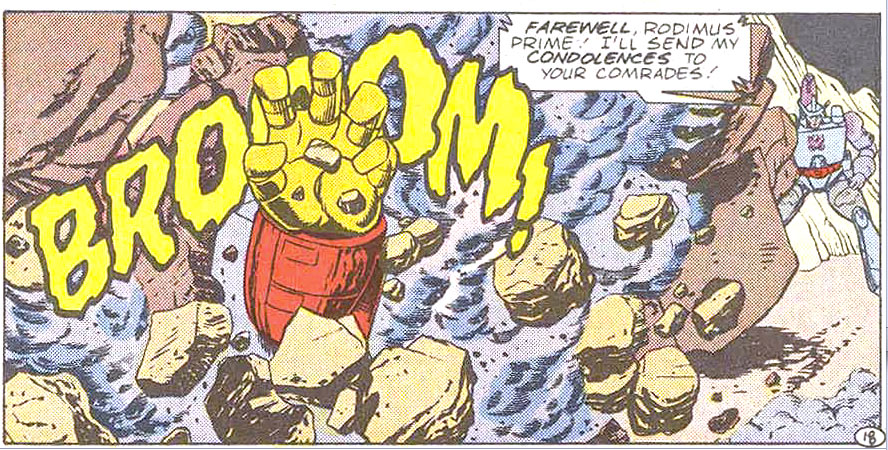 The Quintessons locate the Canister and try to tractorbeam it up to their ship when a stray blast hits it sending it far off into space. The Quintessons go off looking for it before every being in the galaxy turn against them.

Such a random issue. I have no idea how it’s going to fit in with anything. I am assuming it’s a filler issue, but you can’t just leave the story unfinished like that. Can you?

So many characters that we know from the TV show or movie where in this issue with no real introduction. We just accept them as common place.

Why are the drawings so off? I mean by this point the cartoon has been out for years, the movie is no longer in the cinema. How come a bunch of animators can draw transformers so well but the comic book arts seem to still be struggling?

Basically, I don’t get it. Unless Marvel comes back to this to finish the story this issue was a waste of time. 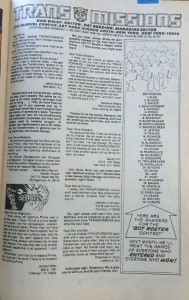 Dear Marvel,
I’ve been reading TRANSFORMERS since it first came out, and I’ve been wondering about a few things.
1) Do the Transformers have internal organs, like humans do?
2) what is their organic structure like?
While I was in science class, I thought about how the Transformers related to all living things. I learned that all living things 1) breath in oxygen, 2.) grow at some time, 3) reproduce, 4) need energy, 5) have protoplasm, 6) are made of cells, 7) have a definite life span.
Jeffrey Brace
Red Bank, N.J.

Transformers are living things, Jeffery, but they aren’t exactly the same as humans (a bit taller, slightly stronger, that sort of thing…). They do have internal organs, but if you opened one up, it would look more like a car’s engine than the insides of someone’s body. Transformers need air, too for air-conditioning and ventilation purposes, but they don’t always need to breathe oxygen. Of course, the Headmasters are a bit different, but Transformers in general are living machines, not human beings.

Dear Trans-Missions,
My favorite Autobots are Hot Rod and Optimus Prime. I like Hot Rod because of his “Life on the line” personality (it reminds me of myself), and I like  Optimus’ skillfulness at everything.
My favorite Decepticons are Scrapper and Megatron. Scrapper is very modest and is extremely skillful. Megatron is very powerful and he isn’t absurd like Galvatron. ‘Nuff said, except… Make Mine Marvel!
Nathan Powell
Montgomery, AL

Dear Marvel Magicians,
I think killing off Optimus Prime was a terrible idea. I mean, Prime is a true leader: no Autobot has his compassion, wisdom, and all-around ability.
Prime may not have been the first leader of the Autobots, but he was the first one we humans saw, and he was the best. You can’t replace him. One person Prime always reminded me of was John Wayne. The way they talk is so similar, and their leadership is so apparent, I can’t believe it! Remember: you may try to replace Prime but it just can’t be done. There is no Autobot like Optimus Prime.
James Keller
Coleman, TX

Tell you what, James. Since we can’t possibly replace ol’ Op, how ’bout if we improve him?!? Maybe a bigger, better Prime…? Who knows, you might even
like it.

Dear Trans-Missions,
I know you get zillions of letters, but I wanted to tell you that I love the TRANSFORMERS. I started reading the comic at issue #23 and I’ve been reading ’em ever since. I’ve seen the cartoon and think the comic is better.
My favorite Autobot is definitely Blaster. I was so worried when you squished his body! I like him best because he really cares about people. My favorite Decepticon is Ratbat ’cause he’s so mean and nasty. I know he’s evil, but I still like to see what he’ll do next. Keep up the good work, and don’t crush my favorites guys, O.K.?
Natreena Waters
East Lansing, MI

Thanks for all the praise, Natreena. We hope you keep right on reading, and if we do anything you don’t like, just write in and let us know.

Dear Trans-Missions,
You guys are terrible. I hate you and so do all my friends. We all wrote to ask you to bring Optimus Prime back, and do you listen? No! Well, I’ve had enough. My friend John is still reading the TRANSFORMERS, and he’s keeping an eye out for Op, ‘Cause I won’t read another issue until you bring him back. So there.
David Chin
New York, NY

Unh, Dave, Dave, you can come back now. Optimus is back, O.K.? We did make a few teensy little changes, but that’s no problem, right? Dave…?

Dear Marvel Comics,
I collect the TRANSFORMERS comics, and I really like them a lot. May a friend and I start a Marvel Universe Club? We really want to.
Matthew Hutchison
Honolulu, HI

Go right ahead and start that club, Matthew, and be prepared to get lots of letters from other TRANSFORMERS fans who like your idea.

Dear Don and Bob,
I’ve just finished TRANSFORMERS issue #38 and it was great. I do wish you’d put Starscream in more often. He’s my favorite Transformer, and you could say that I’m a robot at heart. My friends love them, too. and, like me, some of them are girls. Well, till Cybertron blows up, Make Mine Marvel!
Rosemary Ward
Lakemore, OH

Irrefutable logic, Rosemary, We’re glad you’re with use, and all your friends, too!