With Transformers issue 36, we follow our young little earthlings into space.  Will Blaster be able to keep them safe? Will find out, but first, lets check out the cover to his issue. 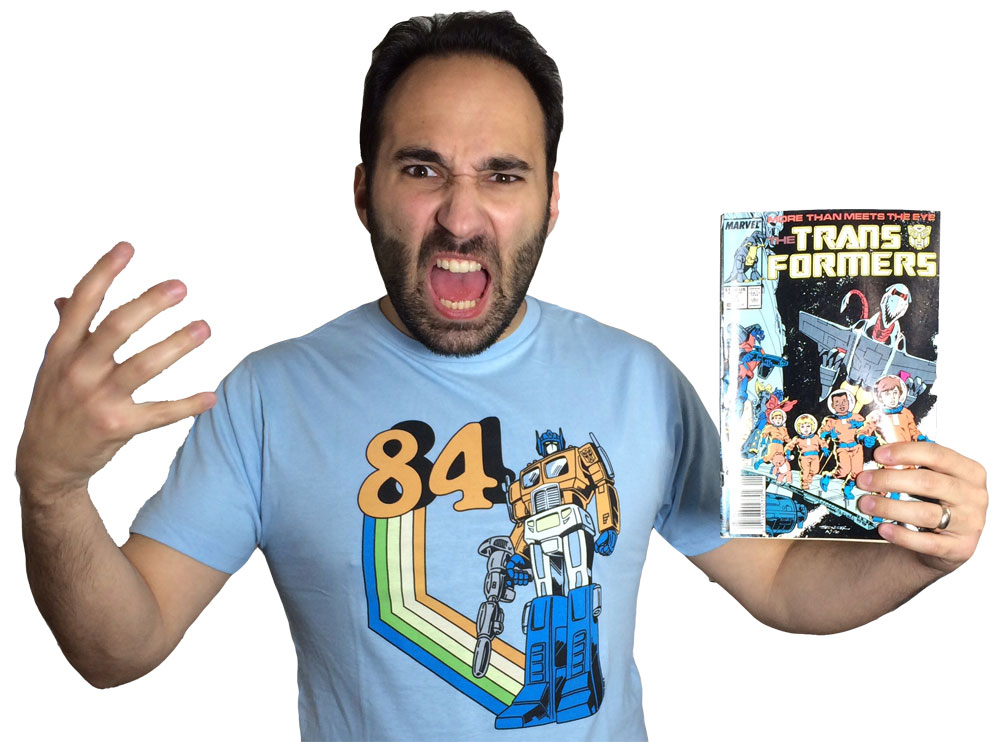 Check out this fantastic Transformers retro shirt with Otpimus Prime from 80sTees.com.

The cover of Marvel Comics’ Transformers issue 36 introduces a new Autobot, Sky Lynx, floating in space. Beneath him are the children from the previous issue apparently being forced to walk the plank while Slag stands as century preventing them from getting back on the spacecraft. I do like the art on this cover. Not the best I have seen, but far from the worst I have seen. I have actually spent time going through this issue and the last issue checking out how the stuffed bear seems to have several different looks about him across the two issues. 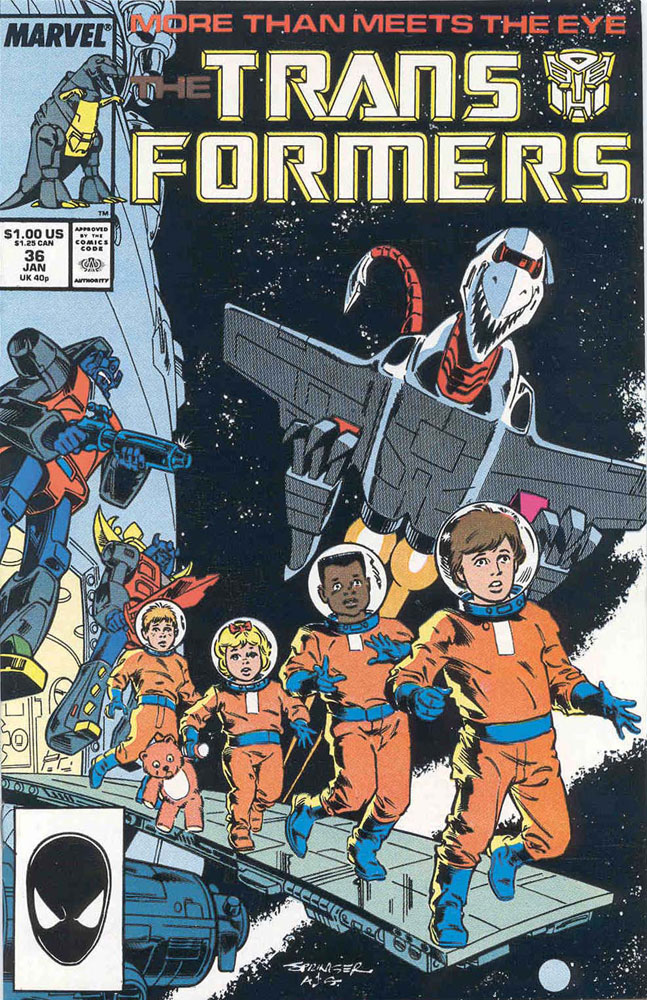 Sky Lynx shows up near Earth and answers a call for help from his old friend Wheeljack who is trying to remove Grimlock as leader of the Autobots due to his terrine like rule and his complete obsession in terminating Blaster. The Autobot’s Ark locates Blaster and the Earth Children afloat within Blast Off. The order is given for the Ark to fire upon Blast Off.

To save the children, Blastoff is ordered to stop and be captured by the Ark. Blaster Escapes through an airlock.

Inside the ark, the children are discovered within Blast Off.  Wheeljack outfits the children with space suits and oxygen. Grimlock quickly holds a trial and accuses the children of providing aid to a known Autobot trader. The children are sentenced to death. This is all a grand plan by Grimlock to pull Blaster out into the open. While the children are forced to walk the plank of the Ark, Sky Lynx swoops in and rescues them. 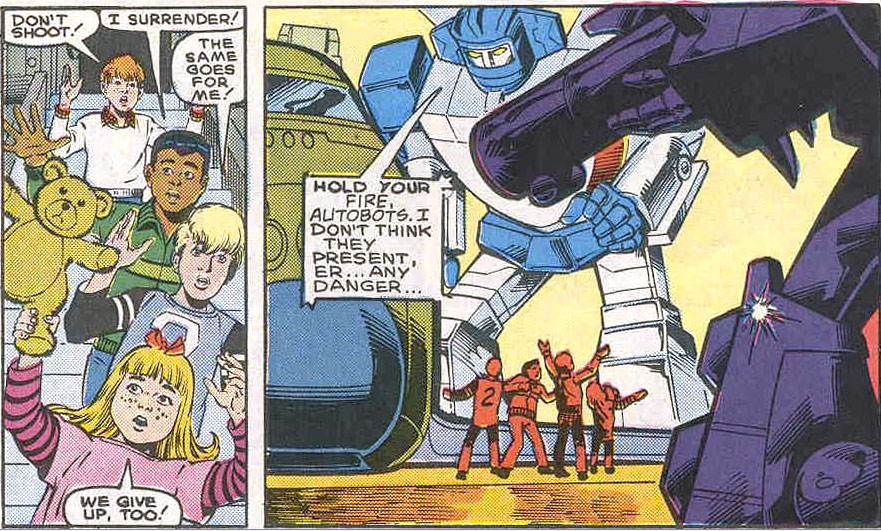 The Ark goes after Sky Lynx, but has to disengage when Sky Lynx enters a meteor shower. The Dinobots proceed on their own which allows Blaster to enter the Ark undetected. Inside the Autobots pretty much beg for Blaster to take command of the Autobots.

The issue closes out with Sky Lynx getting surrounded by the Dinobots and Blaster offering himself in exchange. 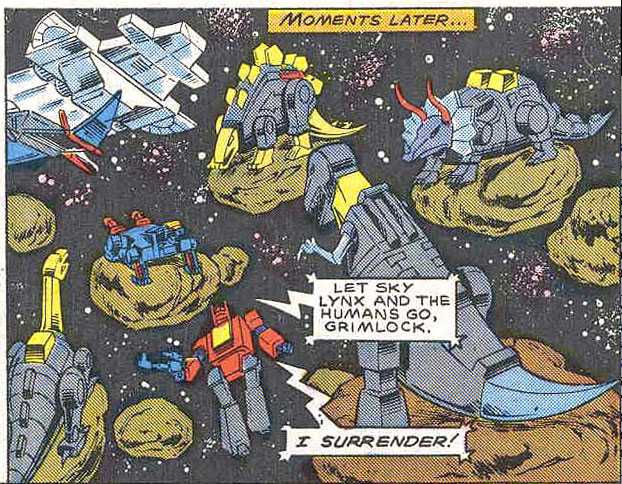 The high points for me in this issue where the little details. Wheeljack equipping the young girl’s teddy bear with an space helmet. Also at the end, how Grimlock surrounded Sky Lynx. It felt very Jurassic Park to me.

Grimlock continues to show how he is not a good leader in this issue and I just want the Autobots to vote him out or over throw him. It will be interesting to see how this story resolves it’s self but it appears we wont see the conclusion for a few issues yet. 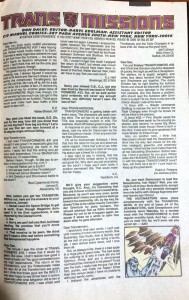 Dear Marvel,
Boy, you guys really outdid yourselves with TRANSFORMERS #31! I was hoping that Ratbat would finally make it to Earth. That was a really ingenious scheme he had to get fuel from the humans – too bad he didn’t figure on Buster’s will-power in his plans. I don’t think that will be the only plot up his metal sleeve, thought.
The guest inks by Jim Fern deserve commending, too. I always figured it would be hard to fill Akin’s and Garvey’s shoes in rendering the complicated Transformers, but Jim did just that. My hat’s off to Jim for a job well done. as a matter of fact, I’ll remove my hat to all of you for another great issue of TRANSFORMERS> Right now, thought, I’m just wondering how much you can get in the used car market for an Autobot. Those guys would sure make rush hour traffic a little easier to deal with…
D.Z.
Valley Stream, NY

Hey, glad you liked the book, D.Z. Oh, and by the way, how did you know that Ian has big feet? How big are they? Let’s just say that Ian can lean forward at a 45-degree angle without falling…

Dear Transformers,
I just read TRANSFORMERS #31 and thought it was Great! I’m especially glad that Buster and Sparkplug are back in the comic. I really felt that the writing and art were both stupendous. I’m so TRANSFORMERed out, I’m speechless.
Before I leave, thought, I’d like you to answer a few questions for me O.K.?
1. How did Ratbat get to Earth?
2. Will we see more of the Throttlebots?
3. When will Circuit Breaker return?
4. Will Grimlock and Shockwave battle to the death?
You Cybertronic Friend,
Jamaal E.
Alexandria, VA

Well, before you get too TRANSFORMERed out, here are the answers to your questions, Jamaal:
1. Ratbat used the Space Bridge to get to earth. Even though Megatron damaged it in his final appearance, it was repaired by the Decepticons.
2. Yes
3. Sorry, we can’t tell you that, but keep reading. We promise that you’ll know when she’s back.
4. That remains to be seen. We think you’ll need a little rest before something that monumental happens.

Dear Don,
The minute I saw the cover of TRANSFORMERS #32, I knew that it would be good. But wow, I didn’t realize how good it would actually be! You guys exceeded even my high expectations. the return of the Combaticons and the Protectobots made my day! All of the Transformers are great, but I think that those guys are the BEST! I was also happy to see Brawl back in action especially after what Megatron did to him in TRANSFORMERS #25. I was afraid we’d never see him again. Likewise, I enjoyed the battle between the Protectobots and the Combaticons, the best fight sequence I’ve seen in a long time! I can’t wait for the finale between Defensor and Bruticus. I’m sure that’ll be another epic battle!
Oh, I mustn’t forget how much I enjoyed the return of RAAT, but where was Circuit Breaker? She should have been there instead of that fool, Walter Barnett. Well, that’s all I have to say. See you next month.
C.J. Hoff
Brookings, SD

Sorry you missed C.B., C.J., but she was fired by Barnett way back in TRANSFORMERS #23. But, as we said earlier (and evidently will never say enough times), you definitely haven’t seen the last of her!

Dear TRANS-MISSONS,
TRANSFORMERS is getting better with every issue. the characters are really coming alive. The art has hit an all-time high. This was especially evident in #32. For example, Blast Off looked great on page 19.
In response to your letter column in that issue, cast my vote for Starscream as the new Decepticon leader. I think anyone’s better than Shockwave.
I’m all for Commander Grimlock. I think that he’s the robot for the job and deserves some respect. I think that a lot of you letter writers are really being too hard on the guy. He should get a break for a change.
I also want to say, in closing, that the HEADMASTERS limited series is turning out great too. Why don’t you pat yourselves on the back? I hope you’ll soon make it another permanent title. That would make this fan happy.
K.C.
Red Bank, NJ

We’ll give your suggestion some thought, K.C. Also, It’s interesting that you are in favor of Grimlock’s leadership. Because, as you’ll see very soon, some people don’t share your positive feelings toward his leadership. Oh, by the way, he doesn’t like to be called merely commander Grimlock by puny humans. you should address him as KING Grimlock. Please try not to let it happen again, because it takes us a while to calm him down after he gets offended.

Dear Transformers,
I absolutely love your comic. I can’t wait until I receive it in the mail every month. Bob Budiansky, Don Perlin, Akin & Garvey, and all the rest of you guys are doing a terrific job. I own almost every issue, and I love them all.
But, as always in life there is a bad apple in a huge pile of good ones. the bad apple I’m referring to is why in the heck did you kill Optimus Prime and put a dim-brained numbskull like Grimlock in his place!? To tell you the truth, I really hate the guy. get rid of him, pronto, and make me happy! other than this minute detail, I have no problems with your terrific comic.
I enjoyed the adventures with the Throttlebots and the Triple Changers in issue # 30-32. Keep up the great work.
Jeff Calhoun
Suffolk, VA

Dear Don,
I’ve just finished TRANSFORMERS #32 and I think that Grimlock should be disposed of quickly. He might as well be a Decepticon. For starters, he is stupid, vengeful, and cares less about humans than Megatron and Shockwave put together. The dumb Dinobot has no right leading the Autobot forces and should be disposed of before he causes any more damage to the already hurt Autobots. But, this leaves a problem, who should lead the Autobots after Grimbrain is ousted? To me there is only one real choice: Blaster. Look at the facts:
1.) issue #30 – Blaster commands Goldbug to release the acid to destroy the Triple Changers even though he knows he will be killed in the process.
2.) Issue #32 – First, Blaster saves the RAAT soldier from death by the ensuing explosion, and, second, he saves Big Steve from Swindle (even though Steve is such a low-life!). It was only his pure goodness that made Blaster do these things.
Also, on another note, I think that Starscream should lead the Decepticons. I think he’s the only real choice for the job. He’s intelligent, powerful, and extremely cunning. I think he’d be much better than the all too calculating Shockwave. before leaving, I have a question for you guys. Where does the HEADMASTERS limited series fit in with the regular TRANSFORMERS book? also, will there be a tie-in? I sure hope so. Keep up the great work!
Ralph A. Petagna
(no address given)

So, you went Startscream to lead the Decepticons, huh Ralph? Well you are right in all of your facts about him, except one – he is still very severely damaged from the battle with Omega Supreme several issues ago! Sorry!
THE HEADMASTERS takes place simultaneously with the TRANSFORMERS. at the end of issue #4 of the HEADMASTERS, both Decepticons and Autobots leave Nebulos, for the rendezvous with the TRANSFORMERS in their regular monthly book. and hey = since you’ve read this far, we’ll even tell you which isch = #38!