With Transformers 35, we return to the main story line that we took a brake from in issue 32. Hopefully will now discover the fate of Blaster and Goldbug. But before we get into what happens with our Autobot friends lets first check out this cover art. 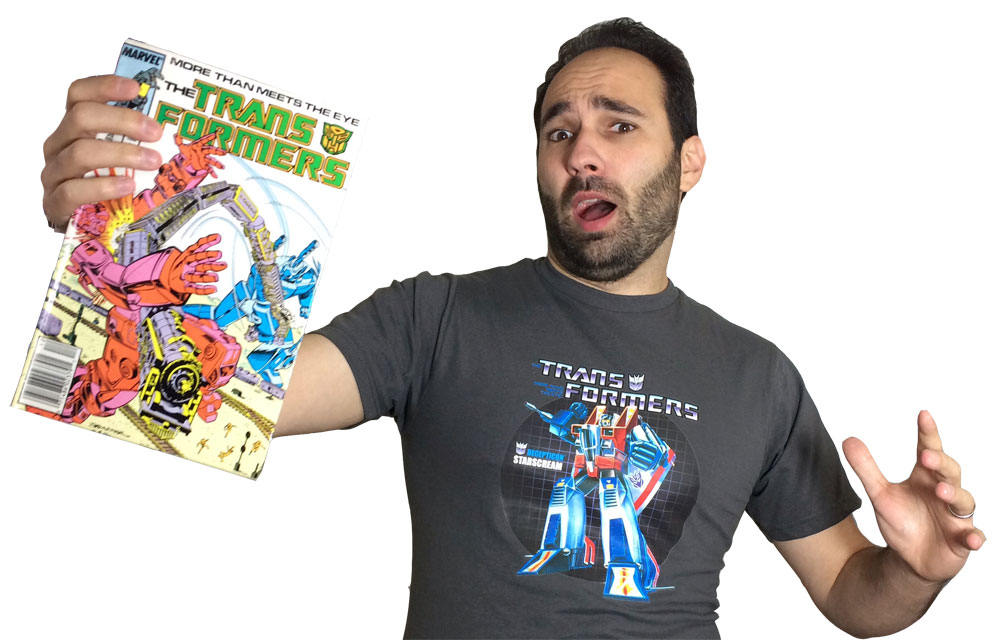 The cover of issue 35 shows a white sky with the tan ground of a train yard. A blue colored Bruticus smacks a red Defensor in the face with linked freight trains like a thug wielding heavy chains. Beneath Defensor, a group of four children are fleeing for their lives. The art work is pretty decent. The lack of colors hurts this cover the most. Solid colors for Defensor and Bruticus, detracts from what I think would be a pretty good cover. 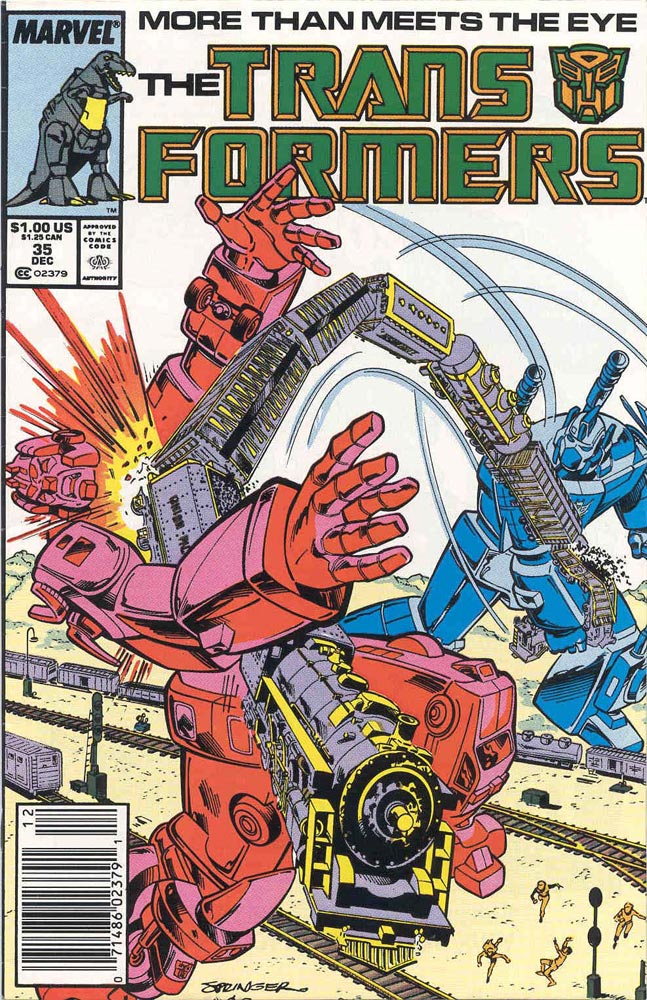 Issue 35 opens up on a group of children playing in a train yard when they spot a Police car. The car is a Protectobot, transporting Blaster back to the Ark where he will be tried and executed for treason. The return to the Ark is interrupted when Blades discovers a Combaticon nearby. Blaster is moved to a safe hiding place so all the Protectobots can investigate the Decepticon activity. 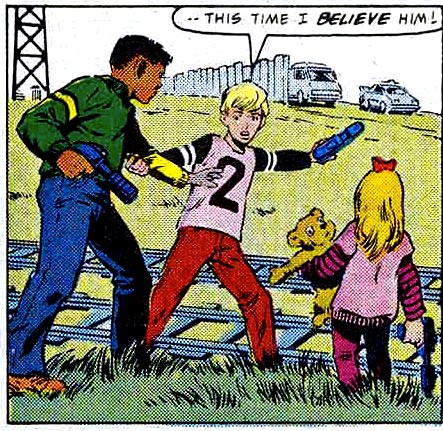 Soon the Protectobots and the Combaticons open up in an all out battle. Blaster is discovered by one of the children named, Sammy. The Transformer battle reaches a point where the Children’s safety is in danger. Blaster convinces the children to remove a “Mode Lock” that prevents him from transforming. Once it’s removed, Blaster can protect the children. 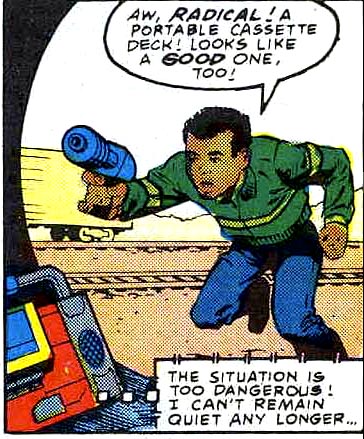 During the Defensor and Bruticus battle, Blaster comes forth and tells Bruticus that he no longer has any kind of allegiance to the Protectobots as they where holding him captive. Bruticus asks Blaster to prove his loyalty by dispatching one of the human children. Blaster pulls the trigger of his rifle and Sammy cries out in pain and falls to the ground. 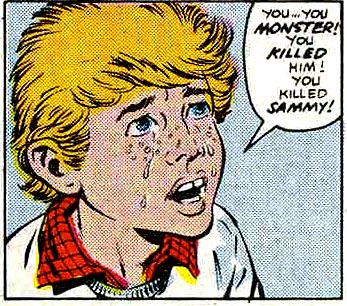 Bruticus goes in to inspect the fallen Child only to be knocked out by a massive electrical shock from Blaster who used some downed powerlines. Sammy gets up, He was playing dead. Something his friends eluded to him excelling at earlier. 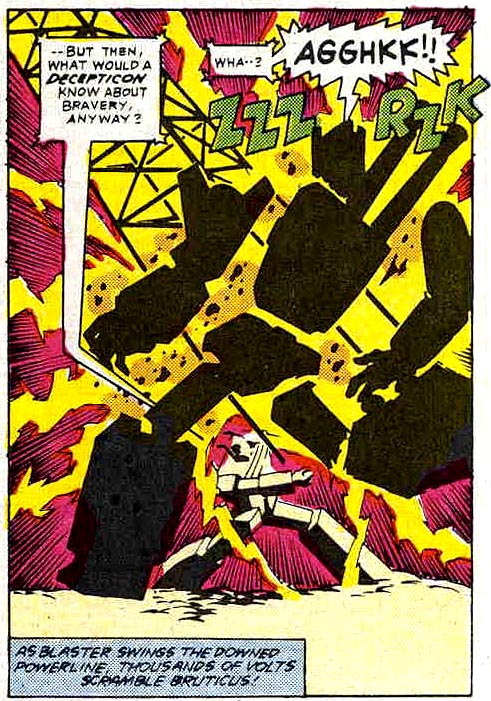 With the battle over, Hot Spot chooses not to arrest Blaster. The mode lock is then attached to the combaticon, Blastoff. This allows Blaster to reward the children for their help by giving them a ride in space. The group no sooner achieves Earth orbit when Blaster and the children find themselves being fired upon by the Autobot Ark. Grimlock has seen to it’s repair and has gone after Blaster. 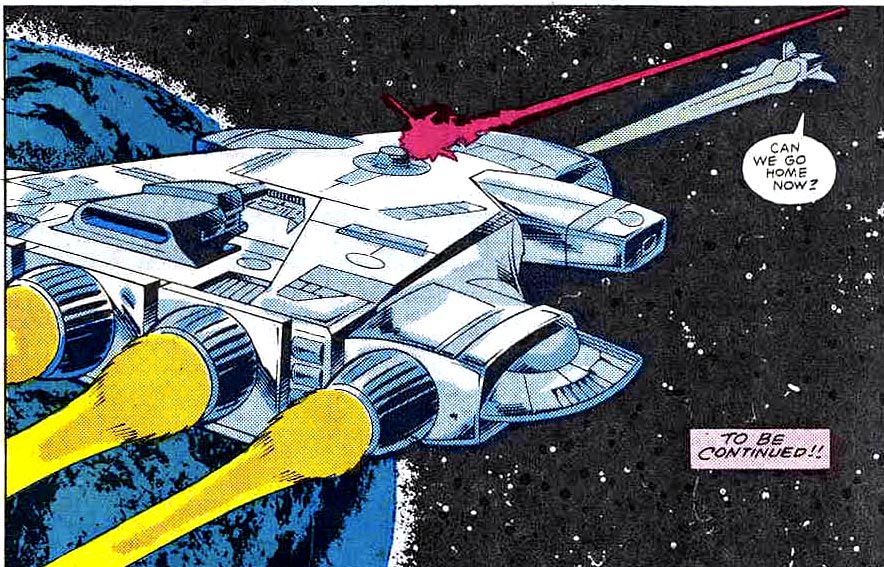 Part of me wants to say that this story feels like the start of a space adventure and that Marvel Comics wants to test to see if their customers will buy a book if the adventure moves out into space. Maybe this is a silly thought to have, I don’t know. But it feels like they want to do more space stuff. Maybe more Cybertron stories. Maybe I don’t know what I am talking about.

The story it’s self was fine. Nothing really wowed me. Lots of bots in this issue and I can tell from reading past Transmissions letters that the fans loved seeing all these different bots being used.

I do like the involvement of the children. I think it was a pretty effective way for the writers to relate to their readers. What kid wouldn’t love to spend a few minutes in space?

Will have to find out what happens in the next issue to see how long this space adventure lasts.