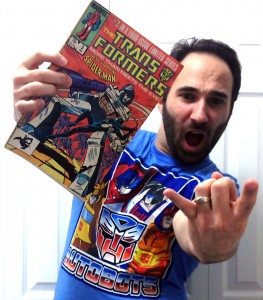 Transformers issue number 3, in a four part series, picks up right after issue 2 and contains a few surprises in the forum of guest appearances and cameos.

I have to admit that I am a sucker for when heroes team up to work together. Sometimes, I think reading a comic with all the heroes from all the different comic book labels taking on all the bad guys from all the comic book labels would be one of the greatest books ever made. I get that same feeling when I watch the original trailer to DC Universe Online. Just seeing all those heroes teaming up together… It’s just how it should be.

In Transformers Issue 3 we get to see cameos by Joe Robertson, Dum Dum Dugan and Nick Fury. But the guest star in this issue is Peter Parker/Spiderman!

The inclusion of Spider-man in Transformers #3 was Jim Salicrup‘s idea in order to bolster the sales of the title, for not only was he the writer of this issue, he was also an experienced editor at Marvel. Unfortunately, since Transformers is a Hasbro property, this ideas was initialy turned down because Spider-Man was licensed to Mattel in 1984 for the company’s Marvel Super-Heroes Secret Wars toy line (a tie-in with the Marvel Comics maxi-series of the same name). Marvel rectified the Spider-Man situation by telling Mattel that they would ONLY allow the Transformers comic to portray Spidey in his all-new black “symbiote” outfit (which was largely unrecognizable by the general public), while Mattel’s Spider-Man action figure was clad in his standard red-and-blue duds. Mattel assented. Little did they realize that as of issue #8 of Marvel Super-Heroes Secret Wars, Spider-Man’s costume was offically changed to black-and the company was forced to concoct a figure to match this change in his uniform. – Transformers #3 Editorial Note, IDW The Transformers Classics, Vol 1 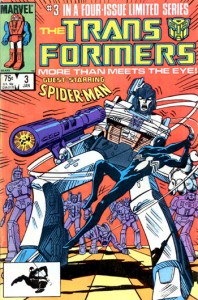 The Orange(ish) cover with yellow font really pops out to the eye. Also in yellow on the cover it says “Guest Starring Spider-Man”. Megaton dominates the majority of the cover depicting him tied up with Spider-Man’s webbing while other decepticons look on in shock. Spider-Man is in his black symbiote suit depicted wrapping Megatron up with his webbing.

This issue starts out with Starscream delivering Sparkplug Witwicky to the Deceptions fortress that has been built from parts of the Harrison Nuclear Power stolen in the last issue. Megatron does a lot of internal questioning about Starscream’s loyalty in this book. It’s almost starting to feel like classic Megatron and Starscream banter. 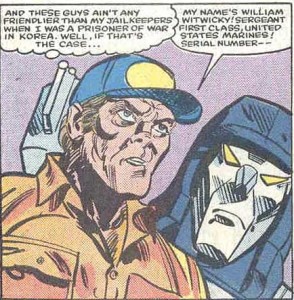 Sparkplug treats his capture the same way as he did when he was a Prisoner of War in Korea and refuses to help decepticons until he is forcefully persuaded.

Optimus Prime brings Buster, while leading the Autobots, back to the Ark for refueling and repairs from their last battle. Seeing the Ark for the first time, Buster is amazed at the size of the Autobot ship. 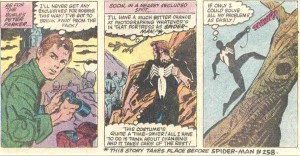 Back at the Decepticon base, Sparkplug tells Megatron that that he needs a few components to complete the fuel conversion process. Megeton sends Soundwave, Rumble and Starscream out to steal these items which attracts unwanted attention from from press and governments around the world. As a result the Daily Bugle sends Peter Parker to Oregon to get some exclusive photos of these giant robots. In pursuit of the best photos possible Peter Parker becomes Spider-Man to get these shots. 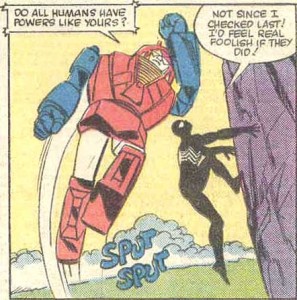 Spider-Man runs into Gears who has to prove to the web slinger that he is a good guy and on his side. He does this by saving a crowd of humans from getting flattened by a military tank. From this point on the Autobots team up with Spider-Man to rescue Sparkplug.

The autobots create a distraction allowing Gears and Spider-Man to enter the Decepticon base from the back. This allows the duo to rescue Sparkplug, but not without some heavy damage to Gears. 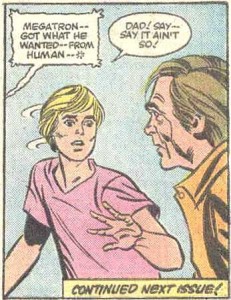 Back at the Ark after the rescue mission, the Autobots say their Goodbye’s to Spider-Man. Ratchet proves his worth once again by bringing Gears back to a functional level and the Autobot informs everyone that the Decepticons got what they wanted out of Sparkplug. The last panel is Buster looking at his father saying, “Say it ain’t So!”