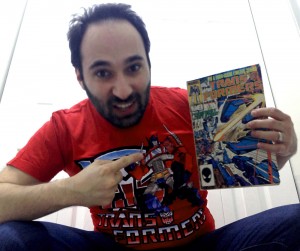 Transformers issue number 4, in a four part series, was supposed to be the final issue of the Transformers comic book. But due to over whelming demand from readers, it continued on.

Marvel’s Transformers comic was initially solicited as “a four-issue limited series” on the cover of issues 1-4, yet was changed to an ongoing series with issue #5 due to overwhelmingly positive reception and solid sales (readers will witness that that after Shcokwave essentially slaughters the Autobots, the final line of issue #4 reads: “NOT the end.”).

Moreover, in recent years rumors abound that Marvel created an alternate ending for Transformers #4 if the sales of the title were weak. However this alternate ending was only included in a UK reprint of issue #4 in the hard-to-find Transformers: The Complete Works, volume Two (Marvel UK); in the British adaptation, Shockwave does not conquer the Autobots. It is Optimus Prime who emerges as the winner and pounces the end of the Deceptions reign on Earth. There is no evidence whatsoever that this alternate ending was created by Marvel’s U.S. office, and a careful perusal of the artwork in the pages of this alternate ending evinces a distinctly different artist than that of Frank Springer (e.g. linework, structure, etc.) This leads credence to the fact that it was indeed a UK artist who rendered this conclusion. finally, there is no extent version of this ending printed in any remaining copies of the U.S. version of the Transformers #4.  – Transformers #3 Editorial Note, IDW The Transformers Classics, Vol 1 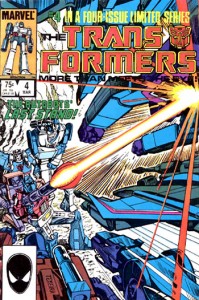 The cover of issue #4 is a difficult one for me. My eyes don’t know where to focus on the page. So, at first glance about the only thing you can see is the Transformers title at the top. I think this is because the cover art has so many straight lines and the colors chosen don’t help anything stand out. (They have Megatron in the lower left corner colored brown for some reason.) You end up missing that the comic book is depicting the Decepticons closing in on the Autobots. In green writing under the the Transformers Logo reads: The Autobots’ Last Stand! This is not my most favorite Transformers cover ever, but the story inside makes up for it.

The story however, is much better than the cover art.The banter between Megatron and Starscream is awesome! Reading the last page of this comic, I was reminded of the ending to the Watchmen. Not that this issue has the same ending as the Watchmen comic did, but just that I was just so caught off guard by the ending and left with that same feeling of, ‘whoa’, that I had with the Watchmen. Out of nowhere you have one of the most powerful Decepticons in the Transformers mythology come in and eviscerate the remaining Autobots. To think that this was originally going to be the very last issue of the Transformers is heart stopping. It just left my jaw hanging opening when I read that last page. The only thing at all that lets you know that this is not the end of the comic book series is that on the bottom right of the very last page it says “NOT the end…” Nothing else on that page gives you any hope that that the Autobots will survive. 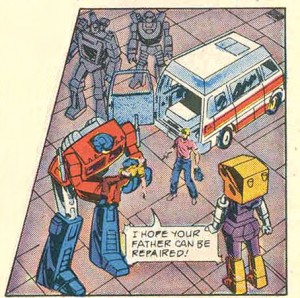 The comic starts off with some of the Autobots accusing Sparkplug of aiding the Decepticons with the fuel conversion technology. Panicked by the Autobots reaction both Sparkplug and Buster try to make a run for it out of the ark, but are stopped by Jazz resulting in Sparkplug having a heart attack and having to be rushed to the hospital by Ratchet.

A discovery made in the Ark’s memory banks shows Optimus Prime that just after the ship crashed landed on earth, its computers detected Decepticon activity on earth. Probably from an attempt to rescue Megatron and the other Decepticons. Using most of its reaming power stored within the Ark, the ship created five Autobots, known as the Dinobots, to combat the Decepticon. This is the issue where the Dinobots are mentioned and seen.

The Dinobots travled in a shuttle to confront this Decepticon known as Shockwave. It was during this battle that contact was lost. Ratchet dispatches a probe to search for the lost Dinobots. 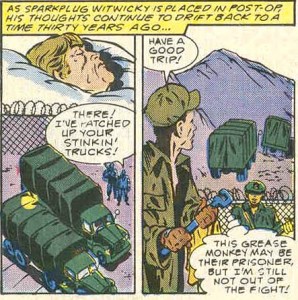 At the hospital, Sparkplug is treated for his heart attack  While he is out he has dreams of his war time in Korea and how he was forced to repair North Korean vehicles that he ended up sabotaging.

At this point the remaining Autobots are forced to use up the last of the Ark’s fuel reserves in a final attempt to fight off the Deceptions from within the Oregon volcano.

The probe sent out to find the Dinobots, detects something buried in the ground and starts to dig it out, but a hand comes up out of the ground and crushes the probe before it is finished.

Back at the volcano the Decepticons are winning the battle against the Autobots. The moment of victory for Megatron seems at hand when the Decepticons all fall, writhing in internal agony. It is reviled that Sparplug had corrupted the fuel he provided the Decepticons and now they lay poisoned. 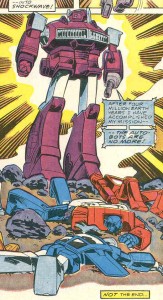 The Autobots, thinking they have won, are hit suddenly by a huge blast from above the that knocks out all the Autobots. The scene ends with Shockwave standing above them all.

This was a great story. I really enjoyed it. Even though someone like me who is familiar  with the mythology of the Transformers, I still can get caught off guard. I have not read these books in over ten years and they still hold just as strong of a punch now as they did when I read them originally.

The following are the letters found in the back of issue 4 of fans writing in and asking Marvel to continue the Transformers. I  really enjoyed reading these and I hope you do too.

Dear Sirs: Your TRANSFORMERS Limited Series is great! Spectacular! this is the best limited series that Marvel has published. Several of my friends agree with this opionon, so we decided to write you this letter about continuing this comic. we urge you to give this serious thought. – John M. King, Campbellsville, KY

Dear Marvel, I just finished reading your TRANSFORMERS Limited Series and I thought it was superbe! I have a question: Since this robot stuff is getting pretty big, Why don’t you start a full-time TRANSFORMERS series? -Carl Davison (no address given)

Dear Sirs, I wish that TRANSFORMERS would get its own monthly series! – Ricky O’Connor, Saco, ME

Dear Marvel, I just read the first issue of TRANSFORMERS. It’s awesome! I love it! But it says on the cover that it’s a four issue limited series. I hope you mae millions of issues.  I intend to keep subscribing until you quite making TRANSFORMERS of i turn 100. – Randy Hampton, Laramie, WY

Marvel, I just picked up a copy of your newest comic, TRANSFORMERS #1, and I loved it! For some reason, I get a kick out of talking cars and planes that are bent on destroying each other. – Chris Carlberg, Tolland, CT

Dear Editors, I love the TRANSFORMERS. Too bad it has to be only a limited Series. – Jeffrey Wayne Bullock, Scotland Neck, TX

Dear Jim: I’d like to send you an adjective that describes TRANSFORMERS: excellent. There’s only one thing I really hate about this comic – this bi-monthly business. – Mike Horkan, Willowich, OH