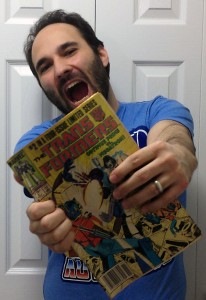 Continuing from Issue #1, Marvel Comics’s Transformers Issue #2, entitled ‘Power Play’ continues right where the first issue left off. But first, I need to talk about the cover.

The mostly yellow cover depicts Optimus Prime taking a shot from Megatron’s Fusion Cannon while he is pinning Bumblebee down with his foot. Buster Witwicky looks on in horror and in the background you can see Sparkplug Witwicky’s auto repair shop. The cover looks good, but does not correctly depict the events inside the comic. As I recall a lot of the covers in the Transformers series rarely accurately depict the contents of the comic inside.

I did find this issue to be more exciting then the first issue. I think a lot of that has to do with the fact that since all of the characters were introduced in the last issue, the writer could focus more on the story with this issue. The excitement of seeing both the Autobots and the Decepticons on earth and for the first time really venturing out and interacting with the strange new forms of life of earth I found to be quite interesting.

In this issue the Decepticons infiltrate the Harrison Nuclear Power Plant in Oregon. Their goal is to use human technology and nuclear power, combined with their own technology to power themselves as well as power their goal which is to retake their homeworld of Cybertron. Fuel is starting to be a big motivating factor in this issue and both the Autobots and Deceopticons are running out of it.

Its not long after that, that the Decepticons come into the picture as they also need Sparkplug’s help to convert earths energy into a fuel they can use. The comic ends with Sparkplug Witwicky being capture by the Decepticons in a classic cliffhanger ending.