Back from the G.I. Joe Crossover story line we can settle into the Transformers for several issues until the HeadMaster comics kick in. We have the death of Optimus Prime, and a new villain to be concerned about. But first, lets check out this cover.

After the Transformers logo the cover reads, “INTRODUCING: THE MECHANIC!” followed at the bottom of the page by “NO JOB TOO BIG OR TO SMALL…” Our new villain, The Mechanic, stands in the center of our cover in front of a pile of Autobot bodies. I can easily make out Ratchet and Blaster among the defeated. Lets crack this book open to see if all is as hopeless as the cover implies. 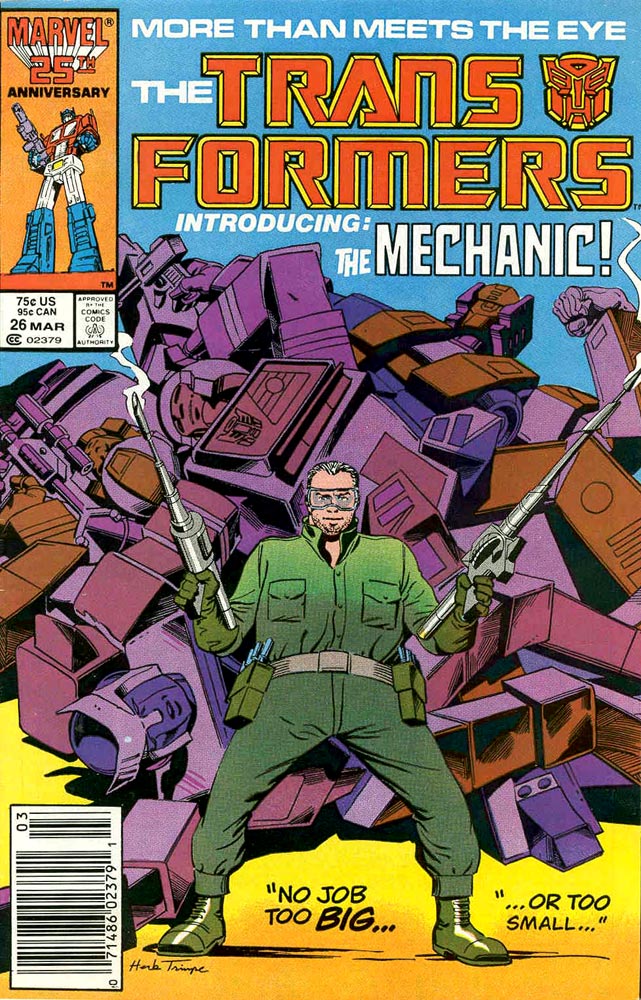 We start off with Ratchet unable to fix Optimus Prime. The Autobots prepare a funeral for their fallen leader some distance from the Ark. Ratchet, feeling he has failed his comrades, chooses to stay behind and try and repair other fallen Autobots that still have a chance. He chooses to explore a local junkyard for spare parts. 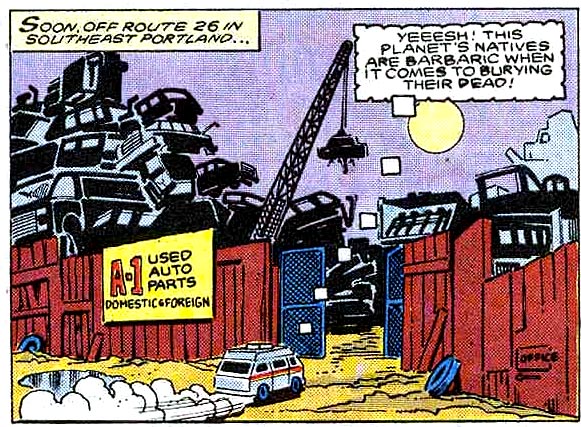 While at the Junkyard in Ambulance mode, Ratchet is stolen by the leader of a car thieving ring calling himself “The Mechanic”. Ratchet finds himself forced to help the Mechanic. If not, he would lose his cover. Ratchet ends up being followed by the police and ends up using his weaponry on the authorities to help him escape. The Mechanic observes the power of this Autobot weaponry and steals it for himself. While attempting to retrieve his weapons, the Mechanic uses the Cryogenic sprayer on Ratchet, freezing him solid in place. 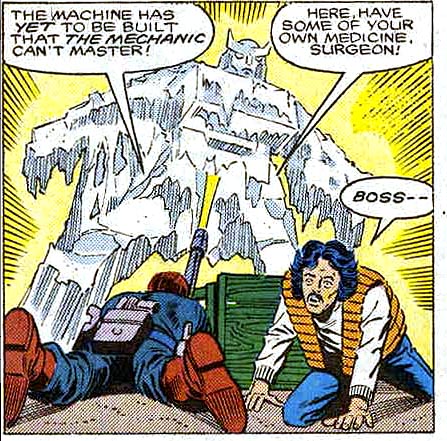 When Ratchet eventually thaws out, he heads back to the Ark only to be followed by the Mechanic. The Mechanic hopes to discover more advanced weaponry he can use. Ratchet, unknowingly leads the human right into the ark allowing the Mechanic to steal a remote-controlled power booster rod. 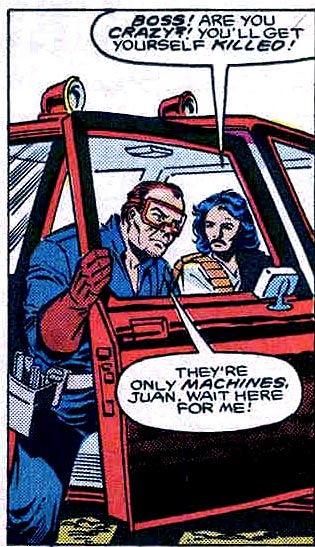 Using these weapons, the Mechanic injures Ratchet and activates the Ark’s defense systems so the other Autobots returning from Optimus Prime’s funeral are prevented from helping. Ratchet is finally able to frighten the Mechanic away by somewhat repairing Prowl. 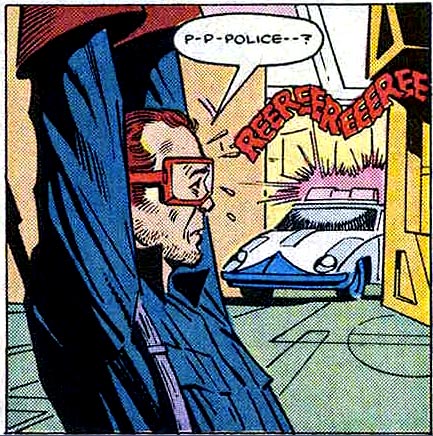 The comic ends with the Mechanic escaping with the advanced weaponry.

Writing my thoughts on this issue has been rather difficult to do this week. In issue 26 we have the Autobots dealing with the death of Optimus Prime. The hole first potion of the comic book depicts Ratchet trying to revive Optimus Prime in every way possible with his limited resources. But all his efforts are for not. Optimus Prime is gone. No chance of return. The decision is made to send their fallen leader into space in a traditional Cybertronian funeral.

Whats wrong with this issue? Every single thing and yet nothing at all. It’s a good story. Granted, it is sad at parts, but it is a good story. The problem, I think, with this issue is that Marvel Comics, and Hasbro, had no real understanding just how popular Transformers and Optimus Prime really was to children at the time. Fans were upset not only over the death of this fallen leader but they where upset that the whole issue was not dedicated to honoring their favorite hero of all time. This is one instance where following a formula for writing a comic just does not work. To many feelings from to many fans were involved.

You have to keep in mind too that the Transformers animated movie was released earlier in the year and fans where also dealing with the death of Optimus Prime on the big screen as well. In reading the letters from the Transmissions sections of this comic, you can get a sense that fans turned to the comics hoping that their hero would still be alive. In some cases they are begging to have him brought back to life in the comics.

I think everyone who is reading this knows that Optimus Prime does eventually get resurrected, but can you imagine being a kid and reading this for the first time? Talk about a depressing book. Its enough to almost keep one from wanting to read the next issue.

Dear Gentlemen (and Janice!),
It seems that Circuit Breaker is slowly learning more and more about the Transformers. I wonder if Circuit Breaker will ever come to her senses. I hope so, because she’s becoming one real pain in the diode!
Now, on to other matters. That business of Bombshell putting a cerebro-shell inside Optimus Prime was pretty slick. You now have a means of introducing new Deceopticons right along with the Autobots. Sooner or later, though I suspect that the Autobots will realize what’s going on. When that happens, I think Bombshell will be sorry he ever messed with Optimus.
Don Lewis
Fortuna, CA

Hey, great call, Don. Optimus did find out about Bombshell’s little “present,” and, as you suspected, he wasn’t too thrilled with it! As for the ever-popular Miss Circuit Breaker, read on…

Dear Marvel,
I wish that Circuit Breaker would finally learn the truth about the Autobots before she destroys every Transformers on earth. I think she could be a very powerful ally to the Autobots. As a matter of fact, I don’t think those Decepti’bums would have a chance! For now, thought, she is definitely trouble. After all, if she hadn’t interfered in the fight between Superion and Mensasor in TRANSFORMERS #22, the outcome would most certainly have been different . . . I just hope that Superion isn’t really hurt badly. He’s my favorite Autobot.
Anyway, thanks to Bob Budiansky for another very entertaining story. I hope you guys keep up the great work. Well, until Buster body slams Shockwave, make mine Marvel.
Ted Hannon III
Portal, OR

You don’t have to worry about Superion, Ted. That big guy can take a lot of punishment. Still, you’re right about Circuit Breaker. She would be much more helpful fighting with the Autobots than she is blowing them apart.

Dear Marvel guys,
I recently started reading TRANSFORMERS with issue #21. After I bought #22, I was compelled to buy every back issue available. Boy, am I glad i did. I’ve been reading Marvel Comics since the late ’60s and I find TRANSFORMERS to be one of the most enjoyuable comics that I have ever read.
I have one complaint, thought. Why don’t you get rid of that bum, Donny Finkelburge? To me, he has no reason at all to be in your otherwise fantastic comic, Please take my advice. It will make everyone happier…
Jeff Herman
Mt. Ephraim, NJ

Gee, erm um, sorry you feel so strongly, Jeff. C’mon, youmust like something about good old Donny… anything… at all? Oh well, we tried…

Dear Bob,
I just read #22, It was spectacular! I really like the fact that Barnett sympathizes with the Autobots. I think he could be a valuable asset for them.
I’d also like to say that I really enjoyed your comic adaptation of TRANSFORMERS THE MOVIE. It was stupendous. I really mean that.
Chris Garza
APO miami, FL

Dear Marvel,
I recently saw TRANSFORMERS THE MOVIE and absolutely loved it. All of the regular and new chracters were great. Galvatron is now definitely my favorite character. He is so powerful he makes Megatron look like a cap gun! I even liked the sound track to it! You guys really did a great job.
After seeing the movie, I felt the need to have it in my possession. I remembered reading in your letter column that there would be a Marvel Comics adaptation of the movie, so i looked for it. Well, I found it. Starting with the great cover, the art was consistently great throughout the comic. Everything was just as I remembered it in the film. the writing by Ralph Macchio was just as exciting in the comic as in the movie.
Suffice it to say that I was very impressed. I am now anxiously awaiting the other two issues in the series. I have no doubts that they will be just as stupendous as the first one. You have made on TRANSFORMERS fan very happy, guys. Keep up the great work.
Craig Andrews
Shreverport, LA

Wow, we’re glad you liked the book, Craig. We’re really proud of the work ourselves. One thing surprises us, thought. you didn’t comment on the tragic death of Optimus Prime. It seems everyone else did…

Dear Transformers Guys,
Whoa! Optimus, the big guy, DEAD? Unlikely, I think. Come on, he’s only out of action for a while, right? But hey, what if he really is dead? Look guys, if Optimus Prime is dead, I think I’ll cry (sniff, sniff). How can you do this? I mean, we all know he IS the best. He is (or was) a kind robot, a great leader, and a great warrior. He better get fixed, or I will be very angry, Why don’t you just avoid a lot of unnecessary trouble and fix the guy, OK? Good!
Paul Formichelli
Melville, NY

Dear Transmissions,
I have just read TRANSFORMERS THE MOVIE, and I very much want to congratulate you for doing a very superb job on this movie. The plot was great, I lovee every minute of it. But there is something I need to have answered. I was very saddened to see Ironhide’s death along with the other Autobots on the ship, as well as Optimus Prime’s death. What I want to know is will Optimus and the other Autobots ever be brought back to life by the Creation Matrix, or by something else? they survived ten millions years, so couldn’t they live another million? O hate to see Optimus go, he is my favorite Autobot. Please don’t get me wrong about this, but we both know that no Autobot, not even Rodimus Prime could ever be as wise and as strong as the great Optimus Prime. I would very much like to see a sequel to these movie (even if it does kill you) because only you guys can do it the best. Buy the way, keep up the good work on the TRANSFORMERS comic books, the artwork is great.
Ulysses Stockdale
Heiskell, TN

Dear Marvel,
I have something to say. TRANSFORMERS THE MOVIE was excellent, so was your adaptation of it. I loved every action packed second of it. I just loved it! But there’s one short question I’d like to ask. Will there be a part II? I mean, Galvatron’s not dead. And Cybertron is still not under the rule of the Decepticons. And, just before Unicron, the killer planet, was destroyed by the Creation Matrix, his head came off. Was that some kind of escape or is he gone for good? All these questions were left unaswered at the end of the movie. Now, I know how long and hard it was to get a movie together, especially that movie. A great movie like TRANSFORMERS deserves a sequel. Please make one!
Lawrence Kinnebrew
Cincinnati, OH

Hey, you have a point there, Lawrence. there really are a lot of unanswered questions  We’ll see what we can do about a sequel, OK? Meanwhile, let’s hear what everyone thinks about that idea. How about it everyone, should there be another movie made? Let’s hear what you have to say!