The Autobots are left with a void they reluctantly need to fill since the loss of their leader Optimus Prime. Choosing someone to fill such very large shoes is no easy task, but an unlikely candidate steps up to the task. Before we dig into issue 27, lets check out this cover. 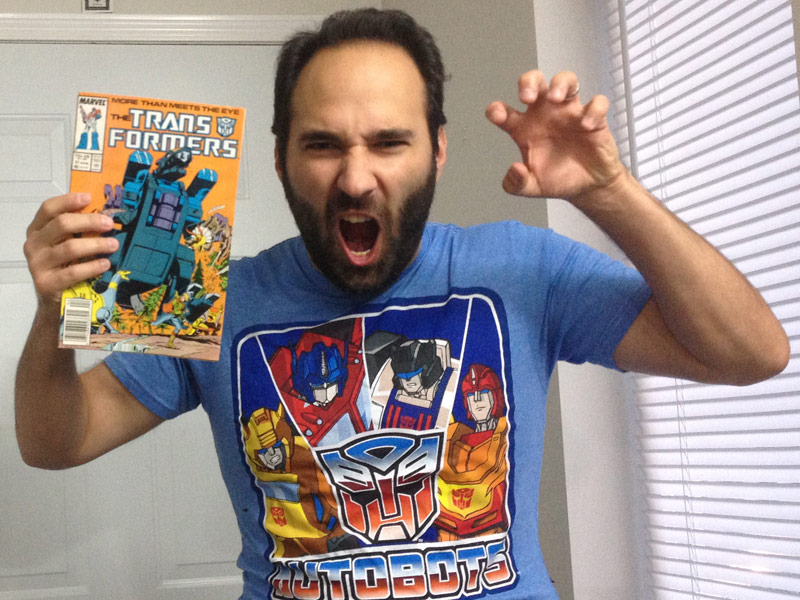 This orange cover, which could symbolize a setting sun, features Tyrpticon stopping through a forest while the Dinobots are attacking him. A young women, Rachel Becker, flees for her life. The white Transformers logo pops out at the reader while they wonder if the Dinobots, who have been not been seen in some time, can subdue the giant Tyrpticon. 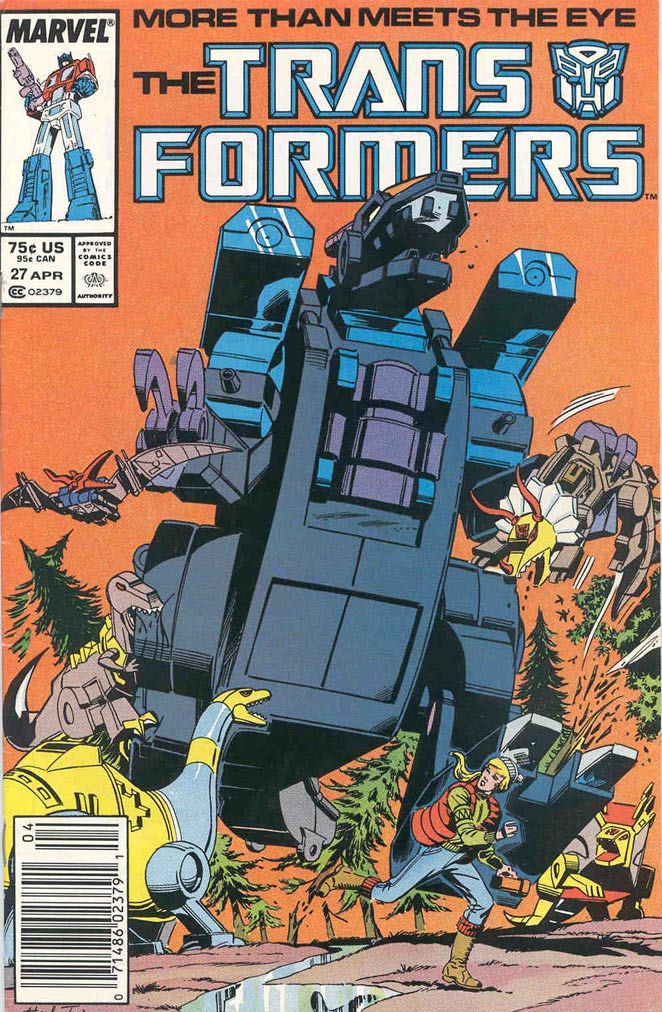 Within an Oregon forest, student Rachel Becker, discovers strange footprint that her professor dismisses as a fake since it has such clean edges. But soon, when a Pterodactyl like creature flies by, they have a hard time denying that the figure exists. The group decides to setup camp for the night. 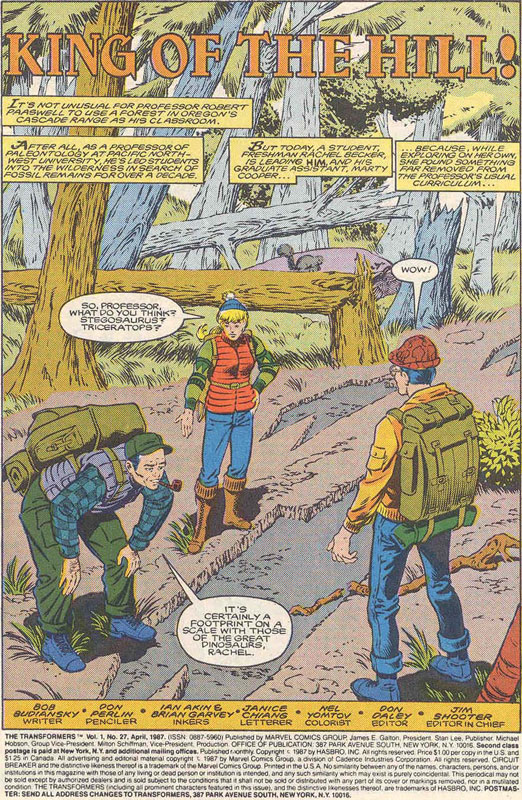 Elsewhere, the Dinobots learn of the death of the Autobot Leader, Optimus Prime. They prepare to return to the Ark where Grimlock hopes to forcibly seize leadership control of the Autobots. The Autobots themselves are arguing that they need to elect a new leader, but are discovering that finding someone in their ranks that can fill the void Optimus Prime has left is no easy task.

Shockwave, who is now the leader of the Decepticons, talks to Ratbat from Cybertron to use the space bridge to send Trypticon, the Decepticon soldier, to launch a surprise attack on the Autobot’s Ark. He hopes that he will be able to seize control of the Ark’s fast resources. Ratbat agrees with Shockwave, but informs him that such uses of the space bridge in the future will be to costly. 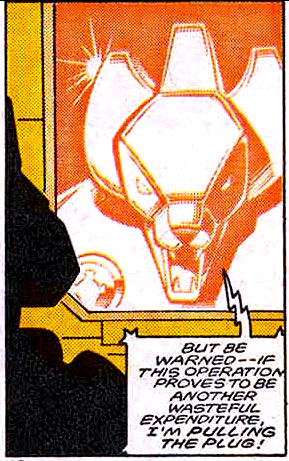 Trypticon arrives in the night, awakening Rachel who investigates. She manages to not be seen by Trypticon as she runs away, unable to find her way back to camp. The Dinobots make their way to the Ark only to find that the Autobots are under attack by Trypticon. All but Grimlock feel that the Decepticon is doing a great job for them. He is unsure and takes a moment to think about his choices. During this time Rachel stumbles onto him and Grimlock is impressed that the human does not feel in horror. He chooses to leave her be.

Rachel is soon discovered by Wipe-Out, who takes her captive and delivers her to Trypticon. Recognizing the human, Grimlock attacks Trypticon by himself. Seeing this the other Dinobots join in. 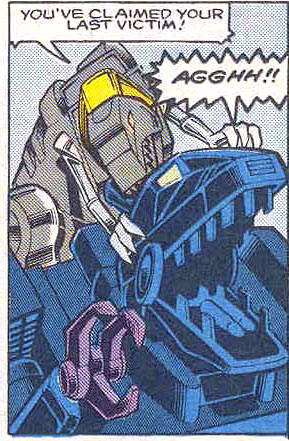 Ratbat, sees that Trypticon has used his energy budget and recalls him back to Cybertron via the space bridge. The Dinobots head for the ark leaving Rachel the only witness to all that has happened. The Autobots all agree that Grimlock has shown all the qualities one should have to be an Autobot leader by his selfless actions against Trypticon. He is announced as the Autobot’s new leader. 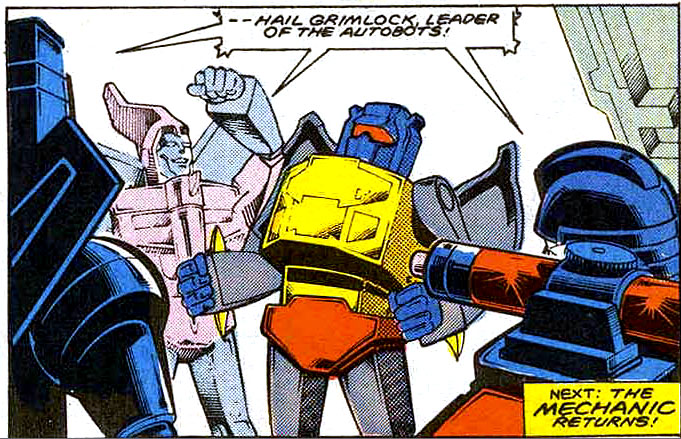 So far, I have not been a fan of the Dinobots in these comics. If I where to stop reading right now I would have to opt with the Dinobots from the 80’s cartoon over the comic books. I really hope the writers turn them around into characters I enjoy because right now, with how they where brought into existence and how they are behaving are not anything I am enjoying.

Ratbat really interests me. Why was he not with Soundwave from the start? Are there other tape player like Decepticons I am not aware of that Ratbat belongs too? This is a question I hope they answer in future issues.

Even thought I am currently not happy with how the Dinobots have been written so far, I can still respect this issue. Grimlock, I feel, does a lot of personal growth here. I can see that if this continues, and with him being the leader of the Autobots now how could it not, I will turn into a fan of the Dinobots in comic book form.

I am almost over looking Rachel Becker, and the people she is with in the forest. Its almost laughable that they don’t react more over the giant dinosaur like footprint they find. I guess for me I would be taking photos and calling in other people to figure out what the hell created the print or how it was created if it was fake. At the root of the problem here, Rachel Becker and her friends just feel shoehorned into this issue.

Dear Fellow Autobots,
I read #23 a week ago and I still can’t stop thinking about it. It was excellent! I can’t believe you brought the Battlechangers into the comic! They made my year. I have a few questions for you guys thought:
1. Will all of those Autobots that Circuit Breaker used be O.K.?
2. When will Omega Supreme be seen again?
3. How are they going to get the graffiti off those monuments?
Clinton Jorgenson
Kenora, ONT

Thank you for your comments, Clinton. We’re glad that you and Edward enjoyed the debut of the Battlechangers. Here are the answers:
1. As you can see by now, the disassembling done by CB had no ill effects. They’re all functioning properly!
2. You will see more of Omega Supreme in upcoming issues. Since there are so many Transformers around, it’s hard to include all of ’em in every issue. We try our best, thought!
3. They’ll need some pretty strong paint thinner to get rid of all that graffiti. Hey, if you have any other suggestions, feel free to write. The cleaning crew will need all the help it can get!

Dear TRANS-MISSIONS,
I really enjoyed the latest issue of TRANSFORMERS and I hope that I can see more of Runamok, and Runabout in the future (even though they’re not in too good shape now…).
In general, I’m a great fan of all aspects of the TRANSFORMERS line. I collect the toys, watch the cartoon, and am always looking for new stuff to get. That is the reason why I collect the TRANSFORMERS UNIVERSE too. I really enjoy that book also. My friend tells me that TRANSFORMERS DIGEST is coming out, also. I was wondering what would be in it?
Oh, one more thing. I read that in TRANSFORMERS #24, Megatron will fight Optimus Prime to the death. Well, my money’s on Megatron. I don’t know why, but i have that feeling.
Robert Wimmer
Parkside, PA

Hey Robert, the TRANSFORMERS DIGEST is available right now at newsstands and local comic stores. It reprints all the original, now classic, TRANSFORMERS stories. It also contains info on all of your favorite characters, so it’s a must for collectors! As for your prediction, well, you already know the outcome of the fight. Let’s hear what people have to say about this dramatic development…

Dear Marvel,
I just finished reading TRANSFORMERS #24 and it was superb! That was such a weird plot! it was a truly unique idea to put all of the real characters into a video game. Bob Budiansky deserves a lot of credit for thinking up that great idea!
I am glad that Bruticus and Defensor were in the comic. Those big guys are great! I would really like to see Devastator again, thought. I’m also glad that Megatron won the fight with Optimus Prime. I knew he would! He is a really powerful guy who never gets the admiration he deserves.
Thanks for the great issue and tell Megatron to keep up the bad work! He’s nasty, someone that I can truly admire!
Derek Canatella
Chalmette, LA

We’re glad you like the issue, Derek. Wow, you really like Megaton, don’t you? We’re sorry that others don’t feel quite the same way you do about the outcome…

Dear Autobots Killers,
AAAAAAAAAAAAAAAAAHHHHH! HOW DAR YOU! It was bad enough to se Optimus Prime die in the movie, but in the comic too! You guys had better do something to even the score, or I’ll be very upset!
Matt Reinker
Honolulu, HI

Dear Marvel,
I just finished TRANSFORMERS #24 and would like to give you my personal opinion. How could you possibly do such a thing?! Why would you possibly do such a thing?! How could you even dream of it?!
I’m really confused now. Optimus Prime, in my opinion, definitely should not have died. This event is so disastrous that I don’t dare think of the future.
Considering that Megatron discovered a way to cheat (The word “AFTERDEATH”), Zachary should have definitely figured out what he did. It should have been impossible for Megatron to appear right behind Optimus Prime after he apparently plummeted to his doom. Ethan blew it! Optimus Prime should really have won the fight.
Penny Osborne
Canada

Dear Marvel,
I was quite upset by the outcome of TRANSFORMERS #24. I can’t believe that you would actually let THE Optimus Prime die (Sniff, Sniff). He is (was) my favorite Transformer of all time. Between this issue and the movie, there wasn’t enough Kleenex around for me and my sister to use. I have a couple of questions for you, thought:
1. Since Megatron cheated by using “Afterdeath,” couldn’t the fight be called a draw?
2. If he really is dead, who will now lead the Autobots?
3. Hey, also what happened to Shockwave? I really haven’t seen him around much lately.
Even thought I am really upset that Optimus Prime died, I still really enjoy your series.
J.P.
Ednond, OK

Sorry we upset you so much, J.P. that goes for Penny, too. Here are the answers:
1. By all rights, we guess the fight should be called a draw. The only problem is that Megatron and the rest of the Decepticons don’t think that there’s anything wrong with Cheating. this would make calling it a draw a problem. Sorry.
2. We’ve been trying to figure out the answer to that question our selves. It seems that Grimlock has interest in that position, as do others. We’ll see…
2. The fall of Megatron really brings Shockwave back into the spotlight. He got what he wanted, the leadership of the Decepticons. We’ll discuss that in the next letter col, thought.
we also apologize to everyone else who was saddened by that destruction of Optimus Prime. Good ol’ Op served the Autobots well. He will aways be remembered!