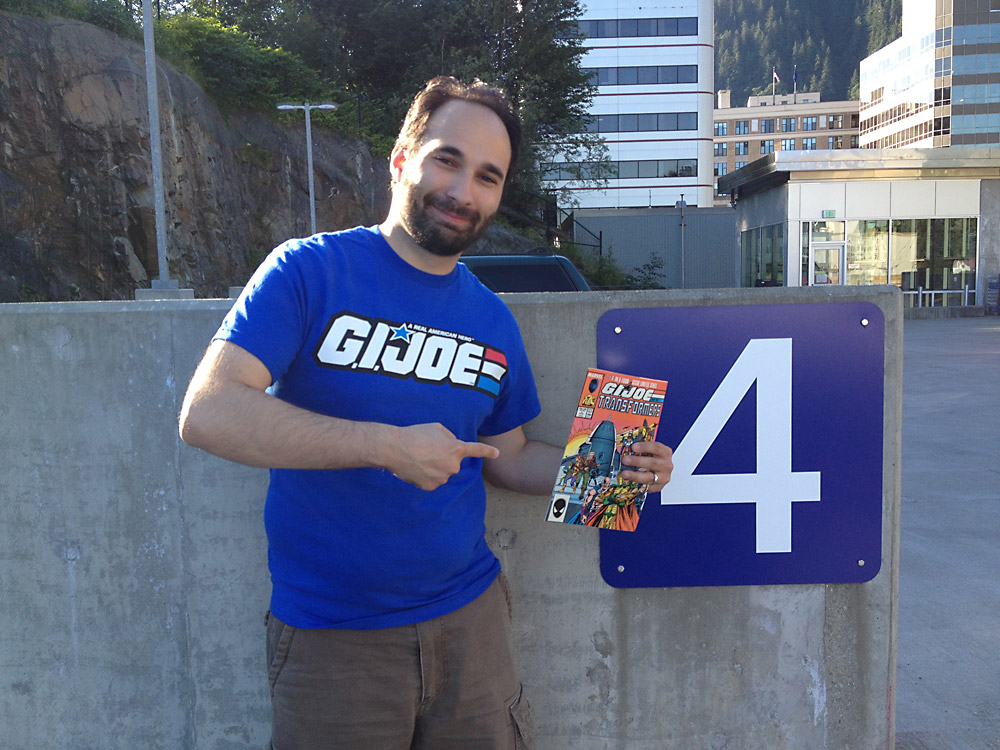 Omega Supreme, Superion and Blaster stand ominously in the background of this issue. A modified Power Station Alpha is a threatening symbol of the impending doom of earth. In front of the power station are the G.I. Joe’s. Hawk, Scarlet, Snake Eyes, and I think Beachhead are posed ready for a fight. Surpentor, Doctor Mindbender, and The Baroness are located at the front right of the cover looking confident and angry. Cobra jets can be seeing flying in the background. I think this could be my favorite cover of the four issue crossover. With so many characters represented here, I can’t help but feel drawn in. 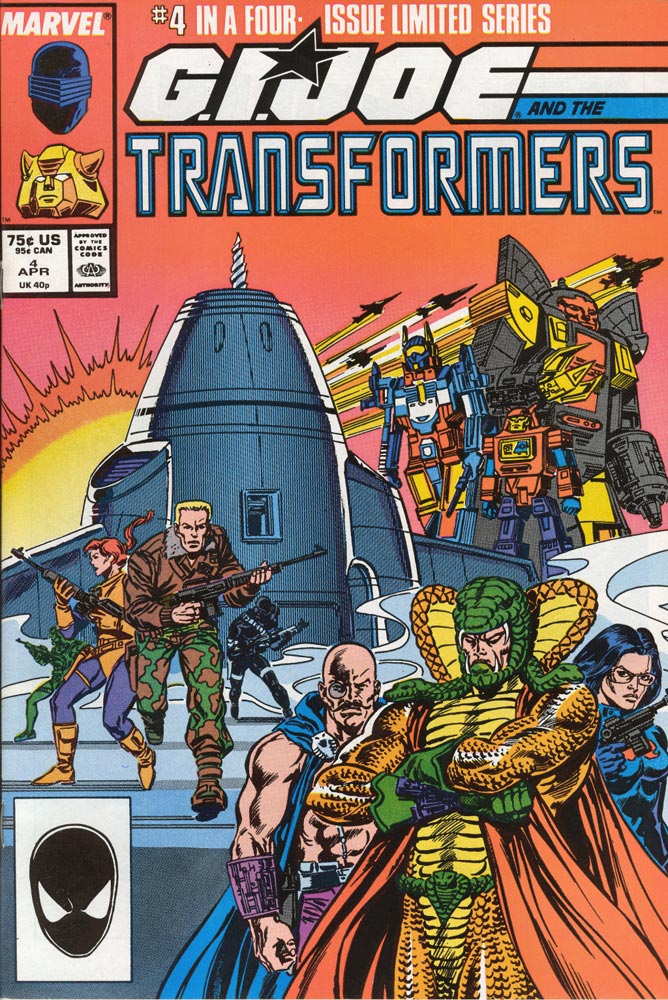 Because of unnatural Earthquakes, The Autobots, along with G.I. Joe and Cobra take cover inside the Ark.

At the Decepticon base, Bombshell has been told to dispose of Doctor Mindbender in anyway he wishes. Mindbender is saved by the Baroness. The two leave, but not before taking Bombshell, currently in insect mode, with them. They leave for Seattle where they are to meet up with the Joes’. 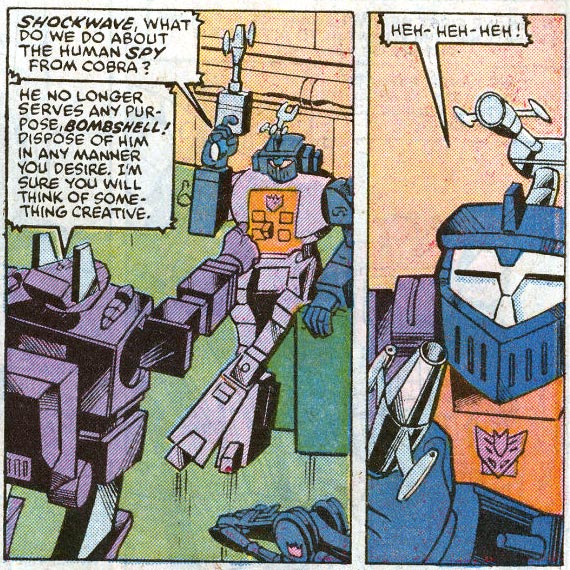 At the Joes’ base, Ratchet arrives and inspects what is left of Bumblebee. He is happy to learn that not only is Bumblebee alive but that Mainframe has started rebuilding him. Ratchet helps and the work is soon completed. Bumblee, in his new form declares himself as ‘Goldbug’.

The future of Power Station Alpha is being debated while all this is going on. Serpentor and Ace feel it should be destroyed. Blaster is worried that with the Decepticons’ modifications to the device, Alpha could be sentient. Hawk is most worried about the loss of life if the power station goes off in a populated area.

The decision is finally made to send a small team that will plant explosives on Alpha. Scarlett, Baroness and Goldbug are part of this team. While this is going on another team of Autobots Joe and cobra forces will attack the Decepticon base as a distraction.

Shockwave sends out several Decepticon planes and Devastator to fight back. The Aerialbots combine to form Superion and fight back. 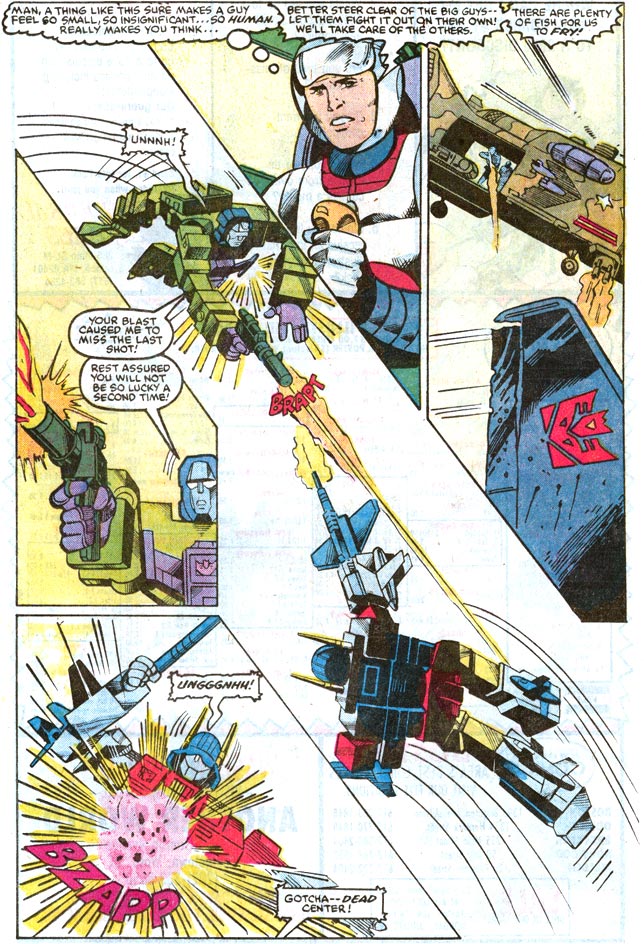 Doctor Mindbender and Mainframe discover a way to use the cerebroshell and the Doctors electronic helment to control Power Station Alpha and send it to an un-populated area. The Baroness activates the timers on the explosives planted on Power Station Alpha, which is against plans. The Power Station exploses in orbit and does not cause any harm to anyone. All of Cobra leaves.

Blaster, concerned that the Joes were in on Cobra’s plan to blow up Power Station Alpha, tells them that with the current crisis addressed, they should leave the Decepticons to the Autobots in the future.

The book ends with Hawk watching as Senator Larkin is taking in to custody. Moments later she is assassinate by a member of Cobra. 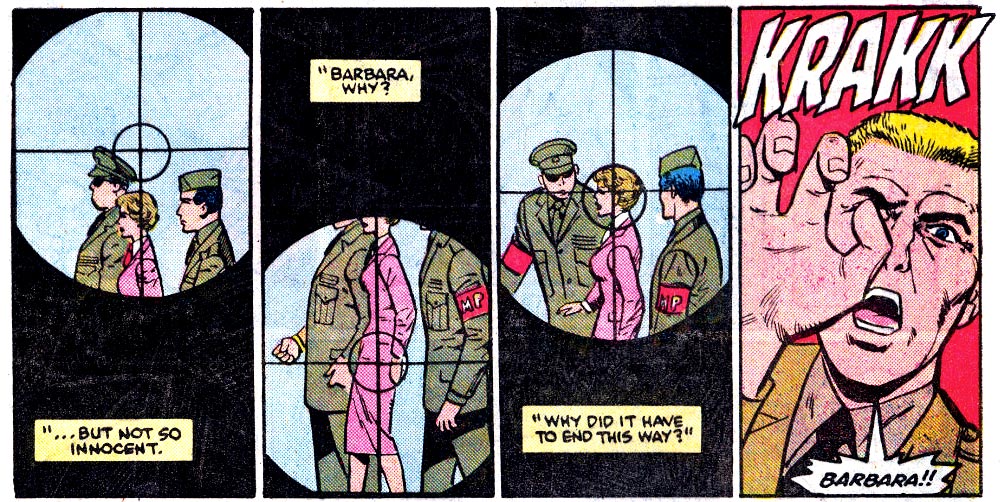 About all I can say for sure about this 4 issue crossover story arc is that there was a whole lot going on. The last issues in particular had a lot of jumping between different stories. I am only pointing this out because it was just not done well in my opinion.

Some aspects of this issue like Blaster wanting to go on with their battle with the Decepticons without the aid of Cobra or the Joes’ was forced. I mean, I understand why they did it, but it still felt forced to me.

The art in this issue was really good. Some of the best I have seen in any of the Transformers’ stories so far.

In the bed we are left with a four issue crossover comic between the Joes’ and the Transformers. A story line that gets wrapped up in a nice little bow and certifies that the Transformers are taking place in the Marvel universe. 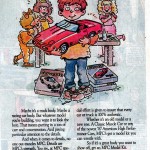