I hope everyone is as eager was I was to find out what is going to happen in Transformers’ issue 22. With the return of Circuit Breaker, I have been very curious how the Autobots and Decepticons are going to handle this new threat. That is, if they are not to busy fighting among themselves. Also, will the Cybertron Seven survive? It seems ashamed that they may be preeminently dispatched after such a short time on earth. They are such iconic Characters to begin with. Hopefully will find the answers to these and other questions soon, but first, lets check ot this cover! 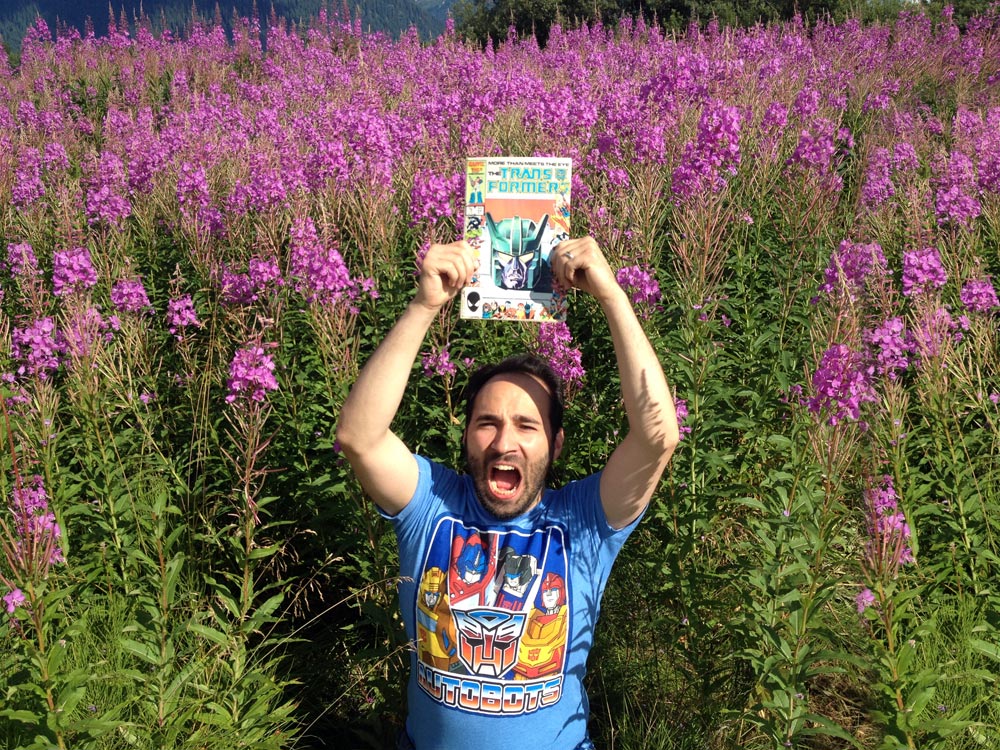 The cover of issue 22 is far different than any covers we have seen before. The cover design was one that all Marvel Comics followed for the month. It celebrates the 25th anniversary of Marvel Comics. All Marvel Comics that came out this month featured a portrait of the main character in the issue. For the Transformers, that character was Menasor. The boarder of the comic, as with all issues that came out that month, feature other marvel characters from other comics. From the little research I was able to complete prior to this posting it does appear that each comic that came out this month featured the same board with the same Marvel characters displayed along it. 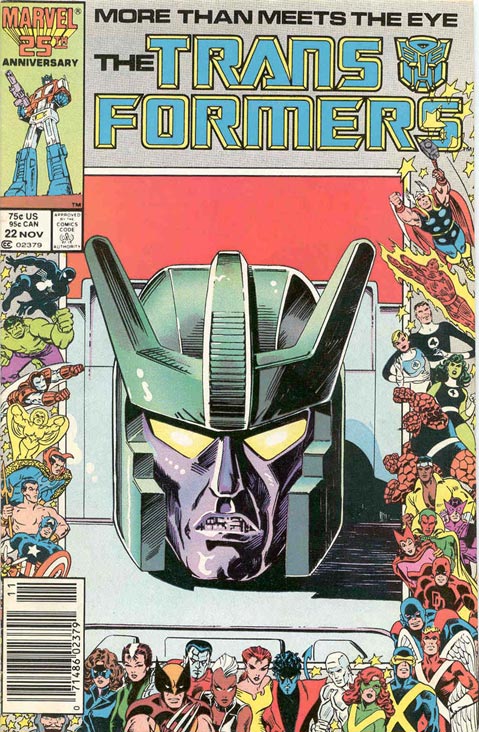 Transformers Issue 22 opens up with Walter Barnett and Circuit breaker remembering how they captured the Cybertron Seven. Barnett, trying in some ways to be the voice of reason for Circuit Breaker in this issue starts to question the need to use such force on the Transformers. Circuit Breaker could care less. To her, capturing or destroying the Transformers is motivated strongly by what the Transformers did to her back on the oil platform in one of the first issues of the comic. 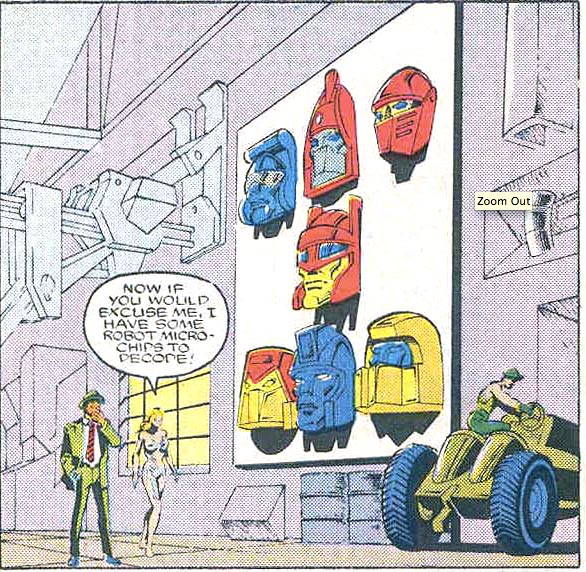 Bombshell monitors Optimus Prime as he has a conversion with Donny Finkleberg where he learns that seven Autobots from Cybertron have recently become stranded upon earth. Finkleberg reluctently agrees to work with Skids only after skids confiscates Finkleberg’s $25,000.00 check he was paid for his services as Robot-Master.

Next, Optimus Prime sets to reactivating the Aerialbots using the Creation Matrix. Because of Bombshell’s Cerebro-shell, the Decepticons are able to simultaneously use the Creation Matrix to give life to the Stunticons, via Soundwave’s internal receiver.

On their search, Skids and Finkleberg come upaon a drive in danger near some fallen power lines. Skids stops to save the driver while Finkleberg just wants to get the task over with so he can have his money back and be on his way. The incident is reported on the local news. This gives Mr. Barnett more reason to suspect that not all robots are evil. All circuit Breaker cares about is that their is a robot on the loose that must be destroyed. She reminds Mr. Barnett that she was hired to capture or destroy all the robots. Then leaves to encounter skids.

The Decepticons view the same news report and the Stunticons are sent out to basically do damage and mayhem to try and reinforce that all Transformers are a threat. 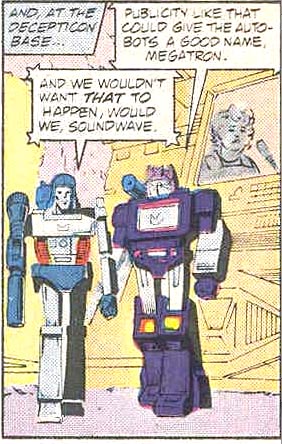 RAAT and the Stunticons come up on Skid’s location braking out in a fight in the middle of a heavy traffic area. Soon the Aerialbots arrive to offer Skids assistance, but they quickly become the target of Circuit Breaker. She blasts Superion while the giant robot is fighting Menasor. Menasor leaves feeling victorious. 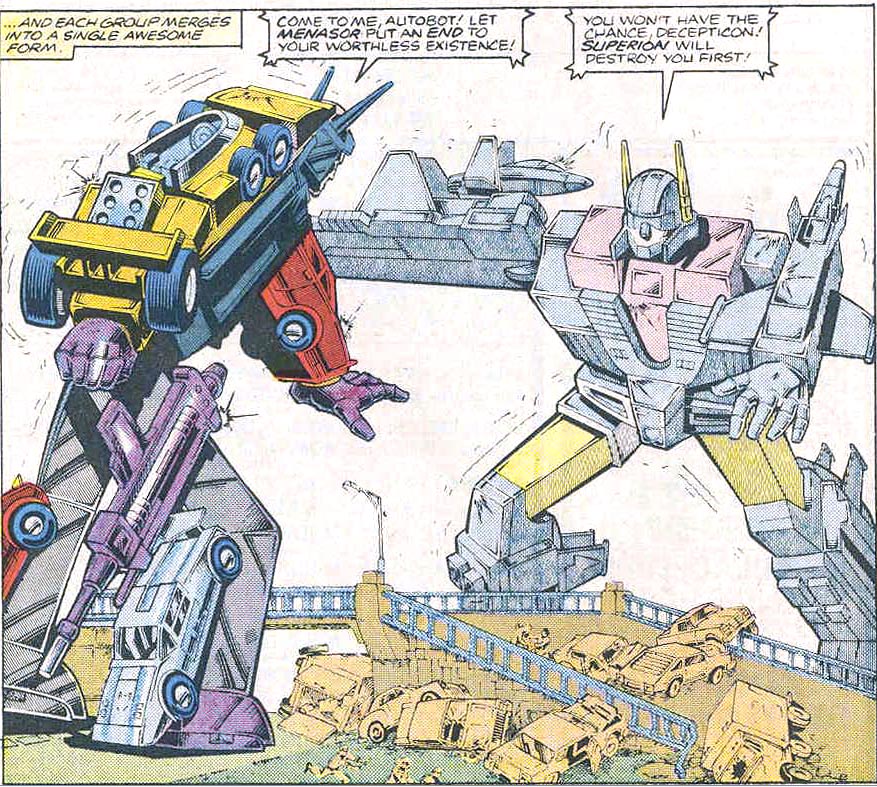 Weak from her attack, Sircuit Breaker is saved by Mr. Barnett before Menasor has a chance to kill her. Skids and Finkleberg are able to make an escape admits all the confusion.

Finkleberg and Skid’s stop at a hotel after Finkleberg complains of being tired. He deactivates Skids, then goes to a pay phone to call RAAT and turn the Autobot in for $50,000.00. 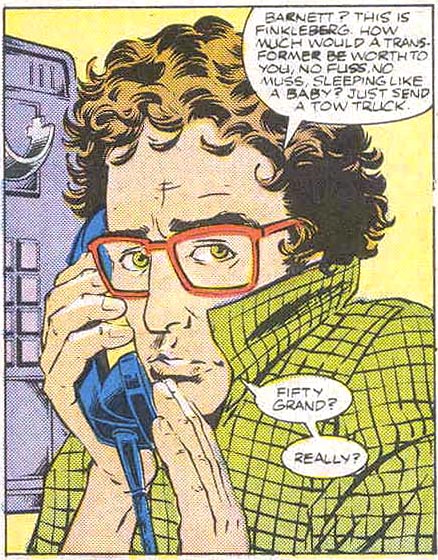 The story idea with the Cerebro-shell that Bombshell shell uses to control one of the human characters in the last issue… That’s just great science fiction right there. Later when Bombshell uses a Cerebro-shell to try and control Optimus Prime I thought that was pretty lame. How could something made to control the human mind work on a Transformer. Just as the story line was about to lose me on this aspect, i felt like it saved me by, so far, not allowing bombshell to control Optimus Prime, but merely read his thoughts. Buy not allowing the Cerebro-shell to have the same effect on the Transformers has it did on the Human just made it feel more believable to me. 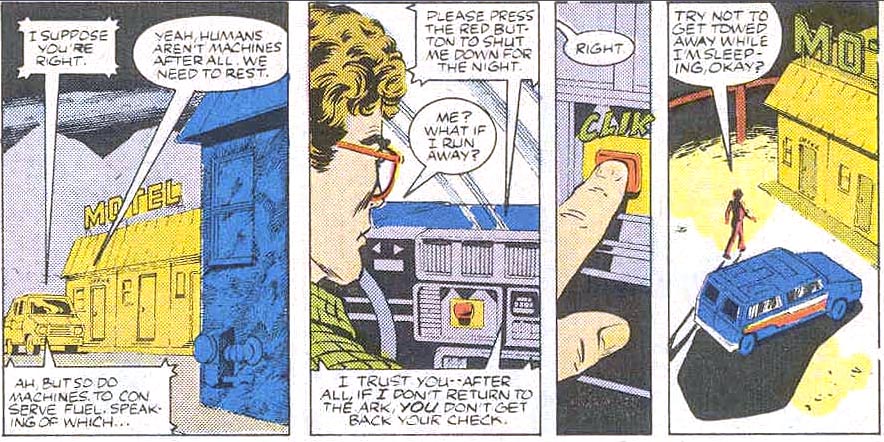 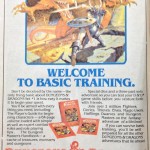