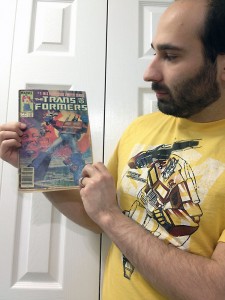 The Transformers comic book originally started off as a four-issue, bimonthly, limited series in 1984 published in the U.S. by Marvel Comics. The comic book proved so popular that it continued publication as an ongoing monthly comic until spring of 1991 when it’s 80th and finally issue was released.

“Four million years ago, they came from Cybertron, a world composed entirely of machinery… a world torn by an age-old war between the heroic Autobots and the evil Decepticons. These incredibly powerful living robots, capable of converting themselves into land and air vehicles, weapons and other mechanical forms, continue their conflict here on Earth. They are…THE TRANSFORMERS” —Marvel US introductory blurb 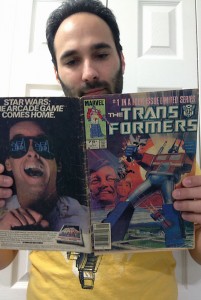 Rereading this very first issue of The Transformers comic book after all these years, I am still impressed with the story line. I can see why kids brought up these comics like hot cakes. As a reader you don’t feel talked down to when it comes to the way the book describes technology or the epic civil war the Transformers have been engaged in for so many years. The story does feel a bit dated when you are reading through it, but I found that to be something you can easily overlook when you realize the book came out in the early 1980s.

Another thing worth bringing up is the artwork within the pages of this book. Its your typical looking 80s comic book art. I noticed in some panels the colors for characters where not correct. From what I have researched online, I have learned that a lot of the final art and models for the Transformers were not completed when Marvel went to work on creating the comic. So I suspect the first few issues will suffer from this kind of color problem. For me it was not anything that took away from the story or the book.

The cover of issue one is awe inspiring. With a larger than life Optimus Prime towering over some unknown futuristic looking highway system. A father and son character float in the background of the cover smiling. These two figures could represent William “Sparkplug” Witwicky and son, (thought SparkPlug looks a lot like Dr.”Bones” McCoy here) Buster Witwicky, bringing attention to the human aspect of the story within, but I had always thought of them as a random father and son enjoying the book together.

So much groundwork of the Transformer’s mythology is laid down in this first issue. You get a real  solid sense of how important it is for the Autobots and Decepticons to win the war against each other.

The story within lays out the origins of planet Cybertron and its Transformer inhabitants speculating that the planet was once dirt and rock like earth, but over time was converted to being completely metal and mechanical. Though the true story may never be known as old recorders that would have recorded such things had been lost to time. 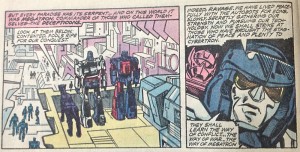 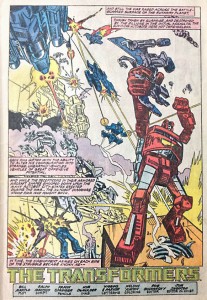 The war waged on for years and eventually became so violent that it broke Cybertron out of his orbit and sent it hurtling through space and on a direct path of an asteroid field. The Autobots, led by leader Optimus Prime, took a ship and several Autobots to blast a path for planet Cybertron through the asteroid field.

Once the asteroids were cleared the Autobot were attacked by the the Decepticons led by their leader, Megatron. Week from their task, the Autobots were not able to defend their ship from the Decepticons. Both groups of Transformers hurtled out of control through space and eventually crashed landed on earth. The ship embedded into the side of a volcano in a place that, after the passage of time, would eventually be known as Mt. St. Hilary in the state of Oregon. 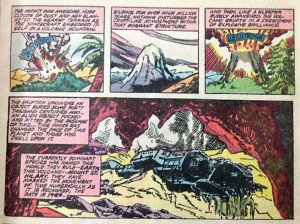 A volcanic eruption in 1984 awakens the Transformers from the ship like crypt. They have been rebuilt by the ship to resemble earth’s intelligent life forms when they are in their alt mode. The Decepticons flee the ship looking for their own base of operations while the Autobots start exploring the nearby area for life.

The book ends with the realization that the intelligent life on earth is actually carbon based and not mechanical. The Decepticons swoop in at the last minute to try prevent the Autobots from making first contact with earthlings nearly killing Bumblebee.

The following images are some of the ads from this comic that I thought where cool and worth sharing. The Last Starfighter movie ad is my favorite.