In 1984 Hasbro teamed up with Marvel Comics and asking them to help create a new comic book to go along with their yet to be released line of toys called ‘Transformers’. This original comic book mini series was only supposed to last for 4 issues. The comic book proved so popular with kids that it went on until 1991, ending with its 80th issue.

The next mini series takes place right after Transformers #37 with ‘Headmasters #1-4. Then the Marvel Comics run of Transformers ends with issue 80.

Here is where things get a little crazy. So Hang on and let me do my best to explain. 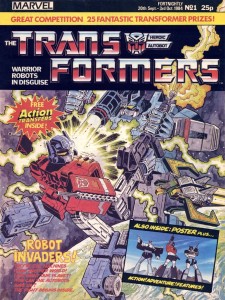 don’t think anyone would argue that the US Marvel Transformers #1 – 80 is the true story or “cannon” as some like to call it. But one thing to keep in mind is that at the same time the UK branch of Marvel Comics started printing the US comics over there as well as writing their own stories that fit in between issues of the US comics. The US run of Transformers went to issue 80. The UK run went to issue 332. Also worth noting is that the UK issues were generally shorter. So one US comic could take two or more issues in the UK to be told.

Now I do plan to read these UK comics, but I have no current desire to collect these UK comic books. What I will be doing is picking up the newly released Transformers Classics UK Graphic novels which will contain all the comics. (Links to be found at the end of this post.)

I want to stress that I don’t think you need these UK books. I don’t think you should feel like you’re missing out on some stories that affect the Transformers continuity by not getting these books. The truth is, as you will learn, there are more transformers comic books that have come out in recent years that don’t take into account the things that happen with the UK releases at all. All they are are stories that you could fit in between stories of the US release. But since a lot of the stuff coming out since the US release does not take into account the things that went on in the UK release, and even Marvel’s says they take place on a separate continuity, we are just going to go on and not worry about the UK material.

I have also learned, in my online research, that that there have been more stories that that take place after issue #80 of Marvel Comics’s Transformers. Actually two story lines have emerged that pick up after that 80th issue. They both don’t acknowledge the others existence so look at it like after Marvel’s issue #80 the story forks. Path A) and Path B). Path A) is Marvel’s Transformers: Generation 2 from 1993 and went on to produced 12 issues. Path B) is IDW’s Transformers: Regeneration One. Which starts with issue #80.5 in 2012 and will end with issue #100. 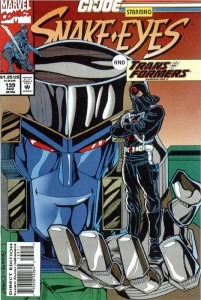 In 1993 Hasbro and Marvel teamed up once again to produce a Transformers comic book that would pick up after the end of the original 80th book ended in 1991. The game plan for that was to reintroduce the Transformers through an already established comic book line that has been doing well since the 80s. G.I. Joe: A Real American Hero. Starting with G.I. Joe issue #138 and on through to #142. 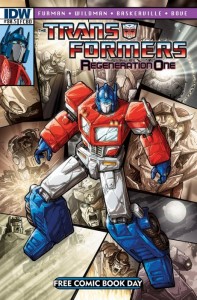 There are also other Transformers comics. Mostly put out either by Dreamwave Productions or IDW Publishing but only the Generation 2 and Regeneration One continue the original storyline/continuity/cannon. I do own several of these other books, but they are to be looked at, in my opinion, as just extra random stories that have no effect on the original continuity. They are not required reading and not anything I plan to focus on with these posts. Just know they are out there if you want to read them.