In the last issue of the Transformers, Megatron had gone a little crazy trying to live in a world without his greatest rival, Optimus Prime, then killed himself. I imagine this will help Shockwave’s plans with Power Station Alpha. Lets find out! But first we should check out this cover art. 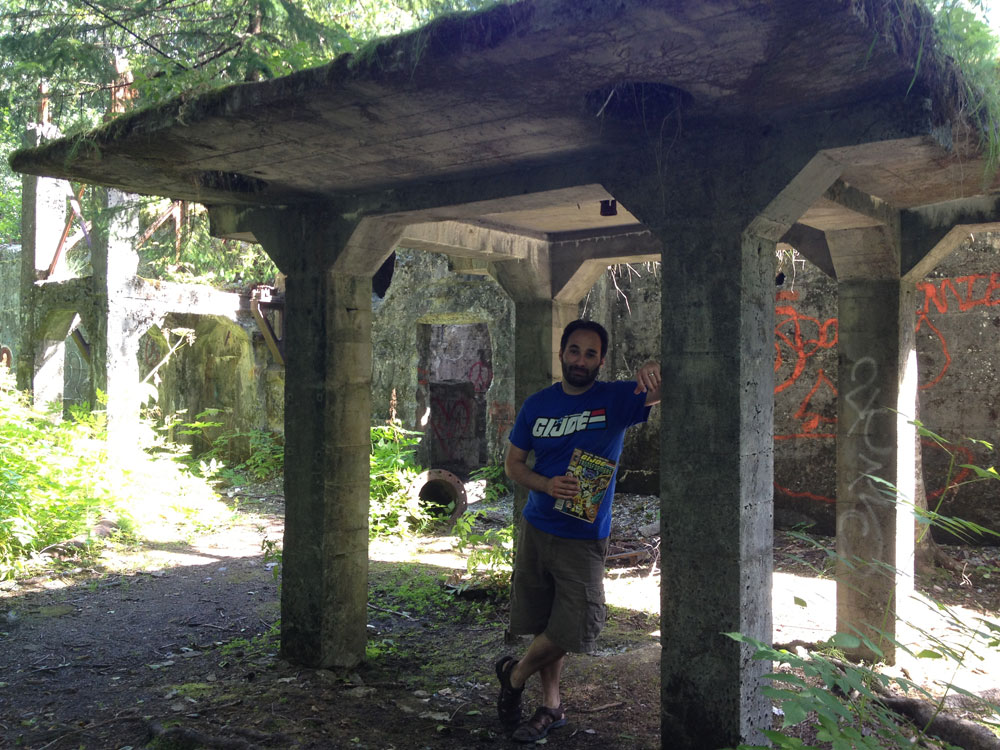 This black cover shows the faces of Shockwave, Dr. Mindbender, Hawk, Serpentor, The Baroness, Omega Supreme, Dirge, and I believe Goldbug looking at an exploding earth. With the exception of Shockwave, the characters have shocked expressions on their faces. Shockwave is depicted here with two hands as apposed to just his one actual hand. The cover is pretty well detailed and I might say impressive as it is nice to see such detailed faces of these characters. 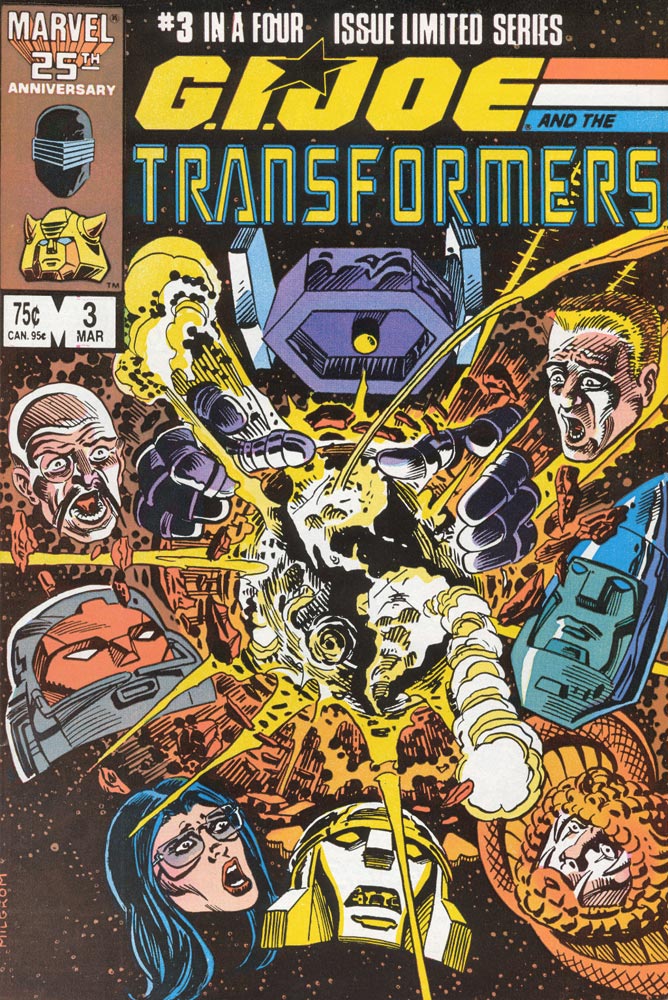 The Decepticon, Shockwave has plans for Power Station Alpha. He shows a video of his plan that displays how Power Station Alpha will be used to take all the energy stored within the earth and send it to Cybertron. This will result in earth being nothing but a lifeless fireball floating out in space. 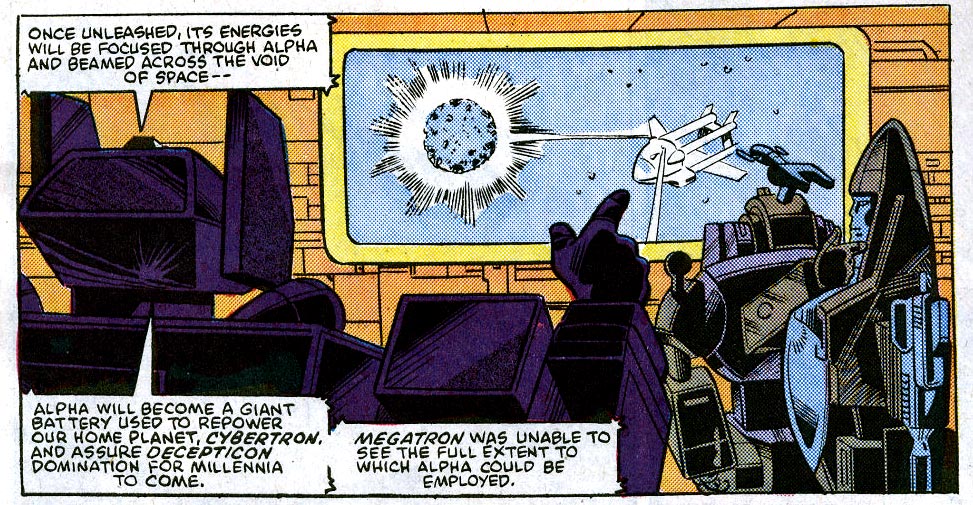 After Shockwave completes showing his plan, Cobra arrives outside of their new base. The two groups team up to use Alpha to their mutual benefits, but both groups are planning to betray one another.

Shockwave has Serpentor and cobra attack the Autobots at the Ark with the purpose of retrieving a generator the Decepticons need to make adjustments to Power Station Alpha. Dirge goes with Cobra, while Doctor Mindbender stays back with the Decepticons. 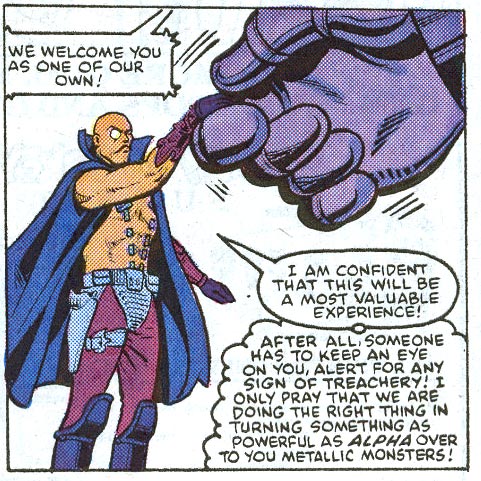 Back at Fort Lewis in Seattle, G.B. Blackrock is talking with Crankcase and Mainframe. trying to explain to them that they blew up an actually alien when they killed Bumblebee and that he was one of the good guys. Mainframe believes it is possible to repair Bumblebee.

At the Ark, the heroic Autobots are taking part in Optimus Prime’s Funeral. Omega Supreme vows to protect the Arks and Autobots with all he’s got. 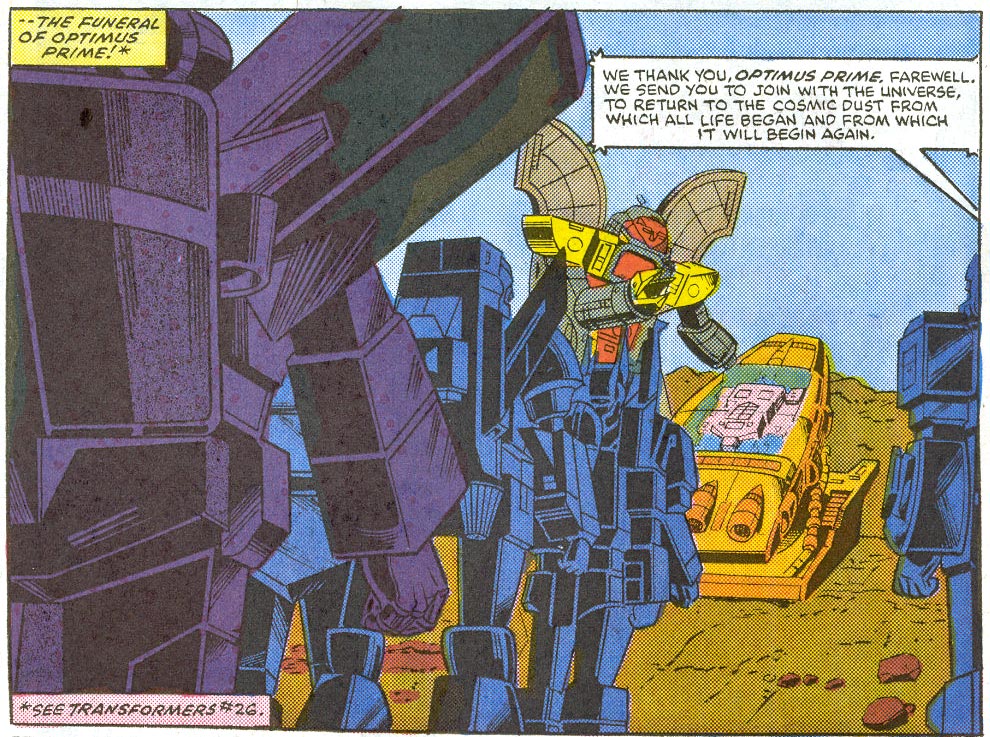 In Washington, (There is a lot going on here.) The Baroness and Senator Barbara Larkin meet secretly. Larkin lets the Baroness know she does not like the way Cobra handled the Alpha situation. That Alpha’s construction records are being examined. The details of which will ruin Larkin. The Baroness reminds Larkin that she knew the risks before getting involved. The meeting was observed and photographed and later shown to Hawk who feels betrayed by his love interest, Larkin.

Back at the Ark, Cobra’s air fleet, along with Dirge fire upon Omega Supreme who, of course, fights back with devastating effect. Serpentor and Dirge both hold back. Dirge, because he does not much care if Cobra gets destroyed and Serpentor just due to being a coward. Eventually more Autobots enter the battle. Dirge and Serpentor taunt each other into the fight. 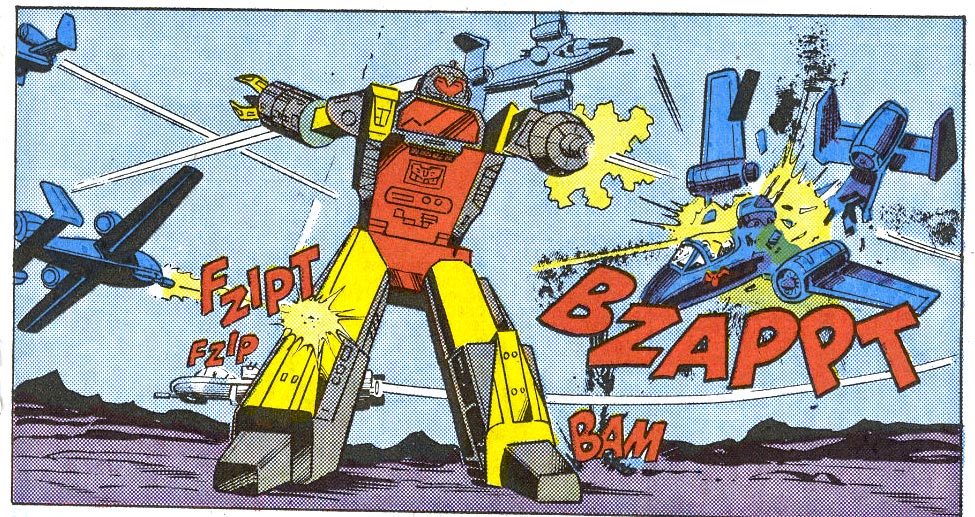 At the Decepticon Base, Doctor Mindbendor is being given a tour by Bombshell, while at the same time a Doctor McGrath is experimenting on one of Bombshell’s cerebroshells that was recently removed from the head of Anthony Duranti.This poking and prodding of the cerebroshell causes Bombshell to go spastic uncontrollably. Mindbender sees this as a possible weakness and is very interested. 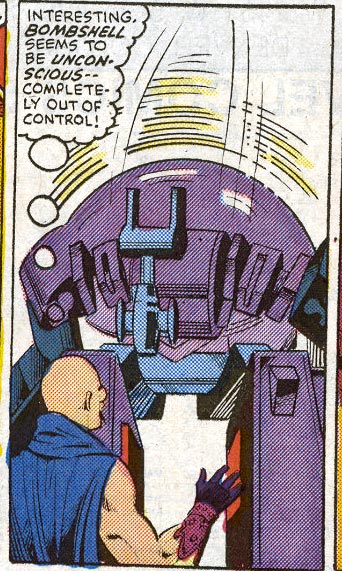 At Fort Lewis, in Seattle, Washington, Mainframe and Crankcase have successfully repaired Bumblebee’s core processor and speech capabilities. Bumblebee becomes aware of the fact he has no body.

Hawk, who is heartbroken, confronts Larkin at her hotel regarding her dealings with Cobra. This does not go well and Hawk wont even let her explain.

Back at the Ark and the on going battle, Dirge preps to fire at Omega Supreme. Serpentor is able to remotely jam his gun. This causes Dirge to explode from the backfire. Serpentor uses this as an “Act of good faith” and is able to end the battle with the Autobots.

Later, Hawk is drinking because he is sad over Larkin. He then gets a phone call from, I think Crankcase and Mainframe. They explain everything to him. Hawk then berates himself for his “Shoot first” actions earlier and orders the full force of the Joe’s to the ark to help defend it.

At Decepticon HQ, the sound of Alpha launching into space awakens Doctor Mindbender. He comes to the realization that the Decepticons have explicitly betrayed Cobra, He contacts Serpentor with the news. Serpentor uses this information, that the Decepticons are going to destroy earth, to create an alliance with the Autobots. The Joe’s also join the team up. 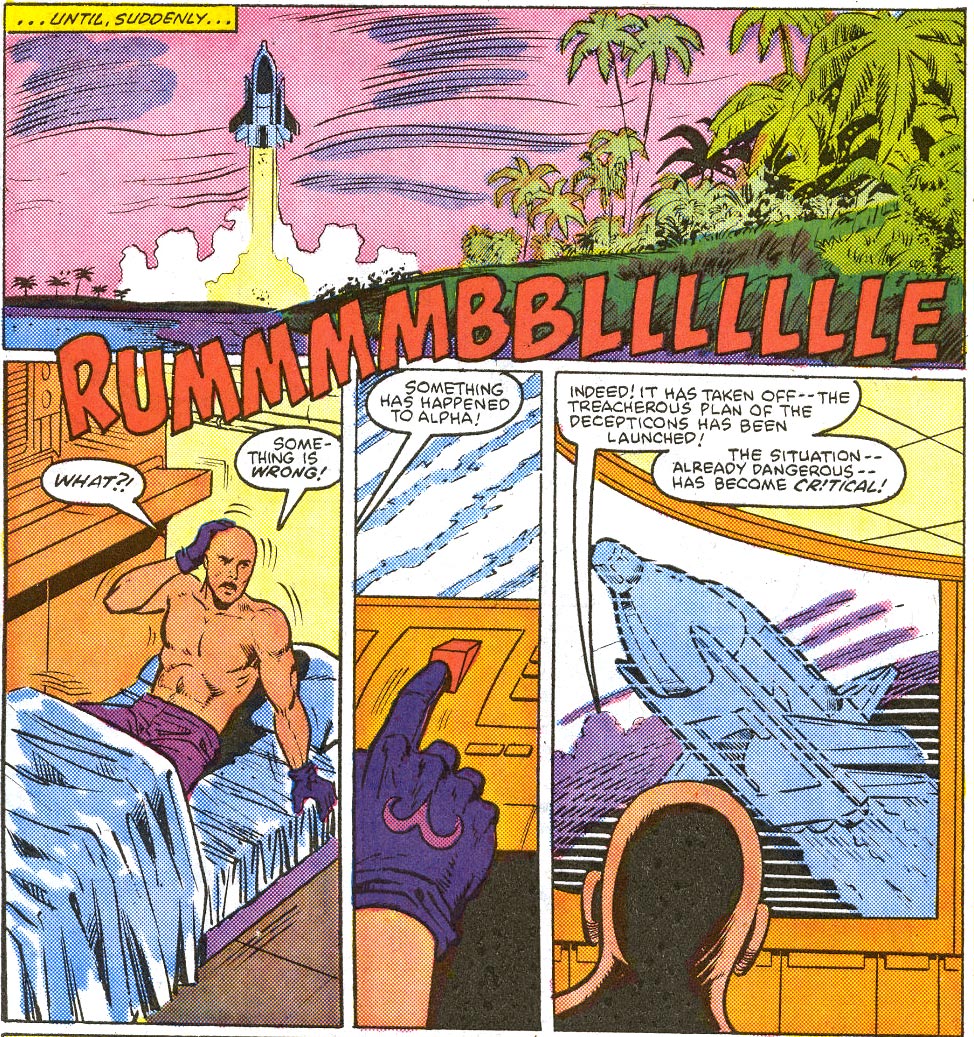 This comic book was out at the same time as the original cartoon movie of the Transformers where Optimus Prime died. I can’t help but think his death in the comics was a means to just try and keep the cartoon and comic book somewhat inline by eliminating a character that Hasbro had no plans of making more toys of or keeping him in the weekly cartoon.

The way Hawk treats Larkin in this issue just kills me. I see this kind of bullshit reaction in all kinds of bad TV and movies. Nothing pulls me out of a story more then an unrealistic reaction to a personal situation. No one I know acts this way when something personal like that happens to them. It’s just so hard to swallow. I would really questions Hawk’s ability to lead the G.I. Joe’s if he was reacting like this.

I really like crossover and team up books, but there is a lot going on in this one. Honestly, it’s almost to much. More than I wrote above. But the nostalgia of seeing these characters together is still cool, even if at this point I think the story is a bit week. One more issue to go and will see the end of this crossover.