This giant sized 50th issue of Transformers has twice as many pages as normal and within contains the conclusion of the Underbase Saga. Will the extra pages be a endurance or a blessing for the book? Will one Starscreams’ plans succeed? Will the Autobots have time to stop him? Will find out. But first, lets check out this cover. 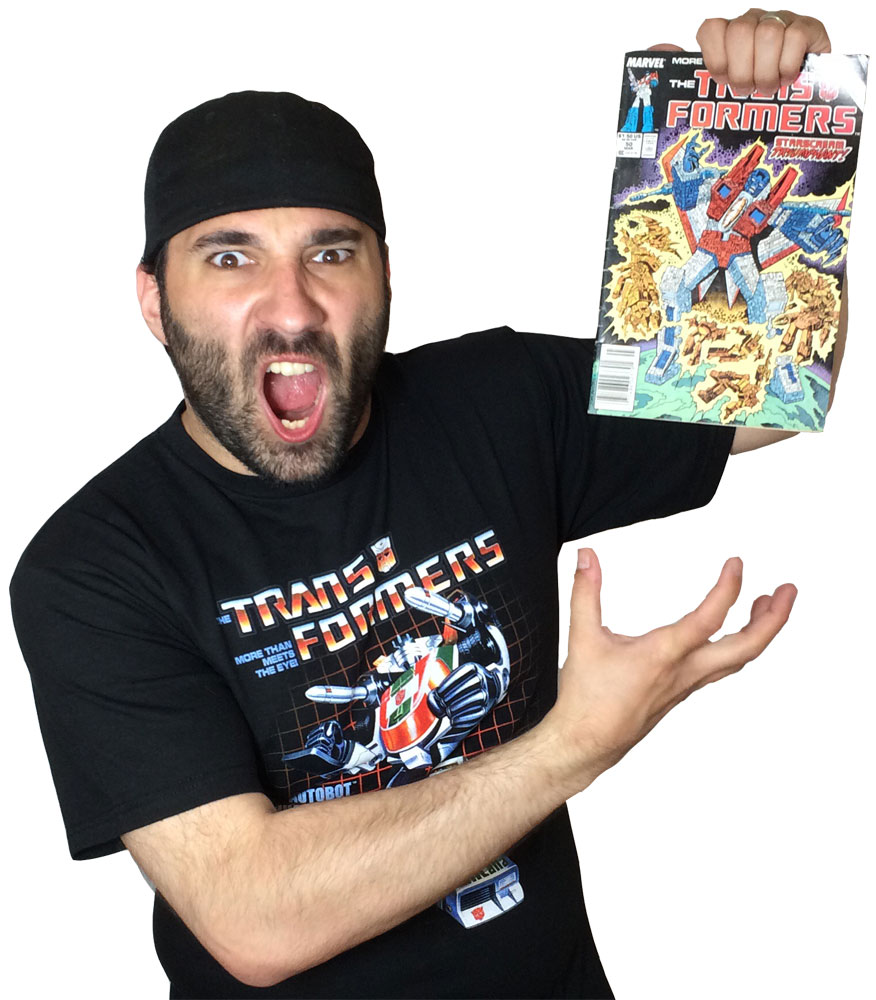 Pick up this Wheeljack Transformers shirt from 80sTees.com today!

Starscream is front and center with a black space background on this cover, floating in space above the earth, aglow with energy that has several Transformers all around him writhing in pain. The cover artist here, José Delbo is excellent. Unfortunately his interpretation, of Starscream with his odd face and head in general, is off the mark. With that said, this image reminds me of the Matrix movie what with the cubical details all over Starscream’s body. Just above our villain is written, “Starscream Triumphant!” And in the top right corner of the comic in a sideways banner reads, “GIANT SIZED 50th ISSUE!” 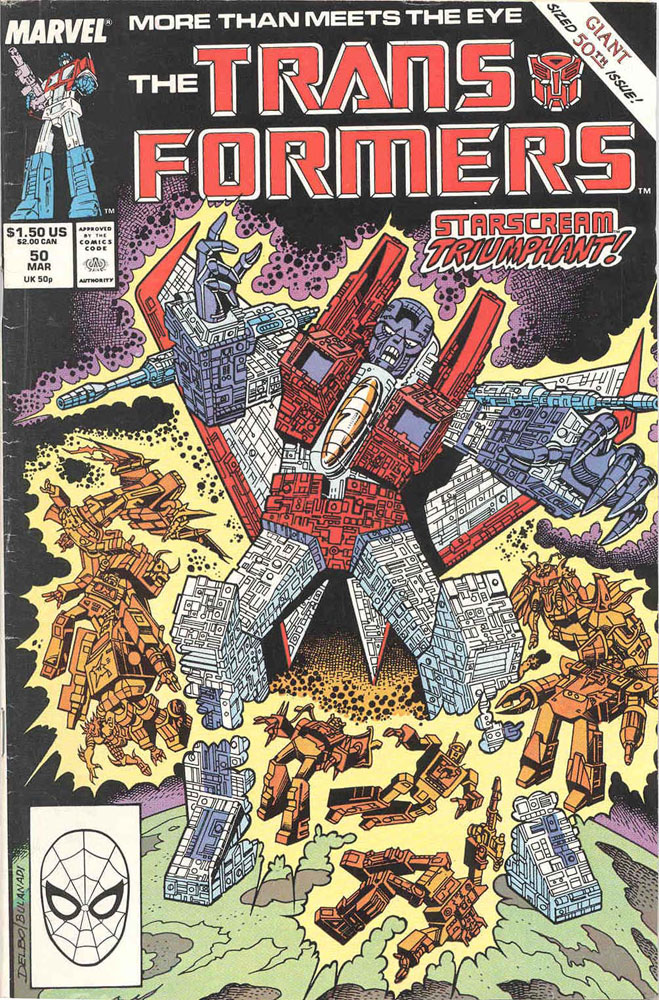 Buster Witwicky lays freezing on a land of size and snow when the Aerialbots arrive. They where alerted by the beacon young Buster activated. The bots radio back to the Ark for backup and it’s not long that the Autobots arrive in full force. At this time Spike is brought back together with his brother, though he is close to death from exposure. Spike has Buster placed with in a heated unit inside cavity in Fortress Maximus’s chest. The Autobots are then caught off guard by a full scale Decepticon attack.

The battle that breaks out between the to factions is painful to watch and only comes to an end when engages Fortress Maximus over Buster. It is then that Buster conveys what Starscream told him just before leaving earth. This makes Ratbat put his anger on hold with the Autobots until the much larger problem can be address. The two sides start an uneasy truths and head for space to hunt down Starscream. 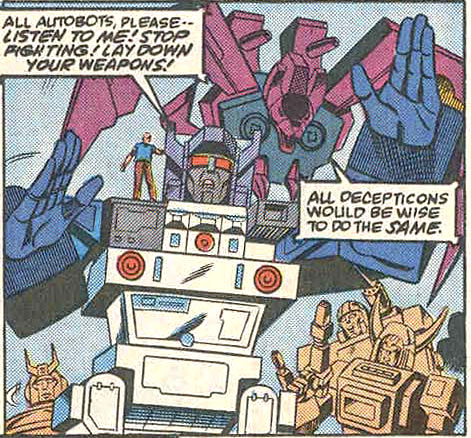 Starscream, who is now in the middle of deep space, leaves his ship to bathe in the knowledge of the Underbase’s light. Starscream is only exposed to the light for moments, maybe just seconds, before he is blasted away from the Underbase by Optimus Prime. However, Starscream’s limited exposure to the Underbase is enough to render himself super powerful and is able to wield the star ship he stole and toss it straight through the attacking island ship. The crew of Autobots and Decepticons are left afloat in space. 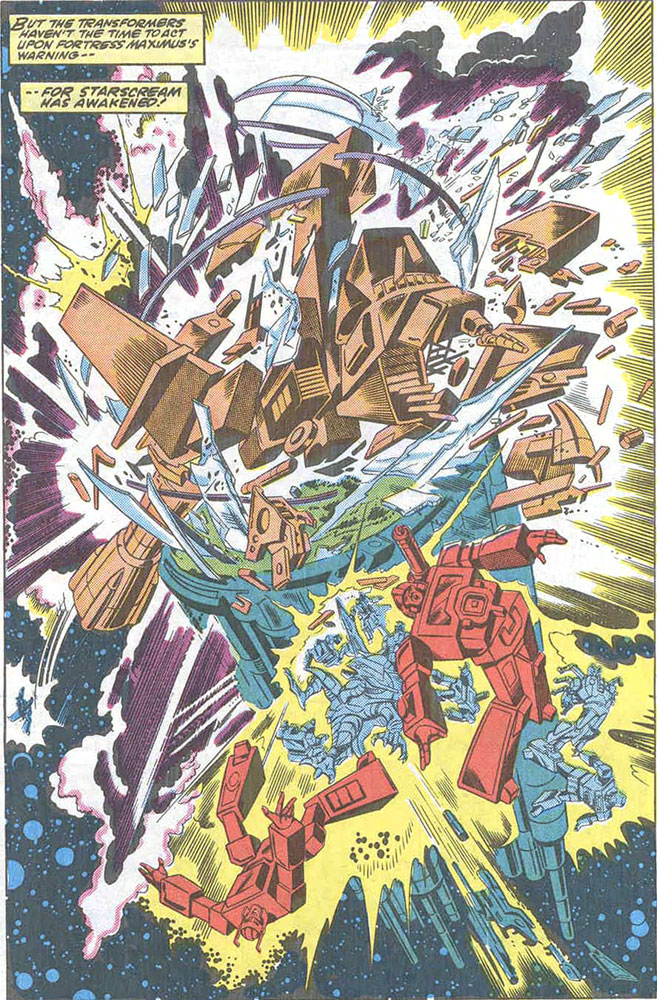 Optimus Prime had a plan B waiting up his sleeve. He summons the Ark to rescue all the Transformers and high tale it back to Earth. They beat Starscream to the plant as groups of Transformers begin splitting into teams to occupy the locations Starscream said he would be attacking. The kink in this plan is that Optimus Prime makes the announcement that he will be staying aboard the Ark rather than take on Starscream with the rest. The Decepticons see this as a sign of a coward as they head to earth. 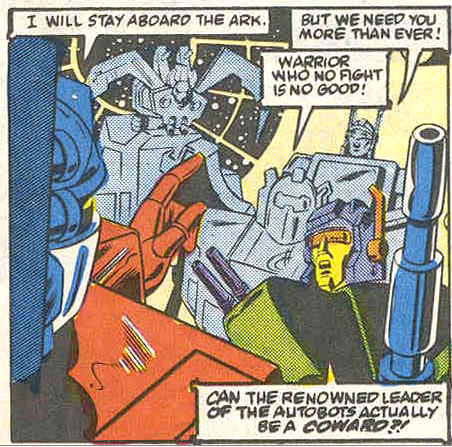 The Autobot and Decepticon teams on earth attack Starscream. From city to city Starscream is fought off, but at the cost of many Transformer lives. As the battles wage on, Ratbat and Scorponok suspect that Optimus Prime might be trying to capture the Underbase for himself. The two leave their battle posts and return to the Ark. 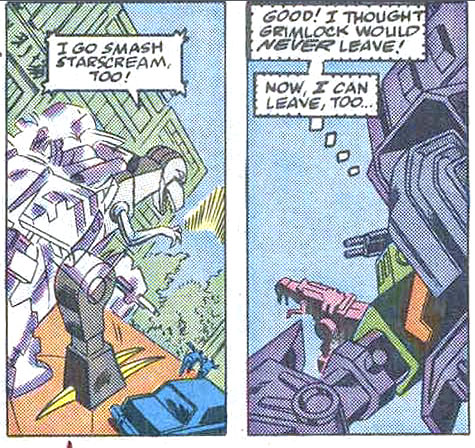 On the Ark, Hi-Q and Optimus Prime are building a rocket with reflective panels. The idea is to catch the Underbase with it and change its course. Buster radios his Brother during the battle on earth for an update. Starscream, who listens in on the communication, sees a potential threat that Optimus Prime could pose and takes off back to outer space and the Ark. Scorponok and Ratbat get there first and confront Optimus. Not giving Optimus a chance to really speak, Scorponok blasts Optimus Prime, killing Ratbat and then takes off for the Underbase. Optimus Prime replaces his Powermaster engine and goes after Scorponok. Prime manages to pull Scorponok out of the bath of the Underbase allowing it to strike Starscream. The awesome power of the Underbase overwhelms Starscream until it destroys him. 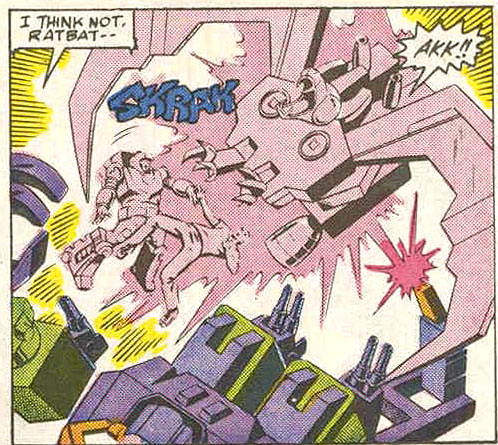 Afterword, Optimus Prime explains to Scorponok that he had learned his lesson about the Underbase millions of years ago. Prime arranged for the reflector rocket and for Buster’s badly timed radio call for help, in order to lure Starscream back out into space where he would try to take all of the Underabse’s power and destroy himself. The Autobots and the Decepticons then depart with Scorponok making it clear that the war will start back up again, tomorrow.

The things I liked about this issue is that Starscream is truly acting how I would assume he should be acting. Blind drunk with power to a fault. He feels right in this issue. Which is great because he is on the cover.

Lets talk a little bit about the cover too. I don’t care for it and I would like to think it’s mostly because of how Starscream’s face is rendered. I know I bitched about this regarding the last issue, but it’s true. It’s very distracting.

And, there are some hole that where not filled. The thing I am stuck on are the Autobot tapes that where discovered issue 47. Maybe it’s because I think the tape Transformers are cool or that we just haven’t see the use of Autobot tapes yet. But I would like to know what happened to those guys.

What do you think? Let me know in the comments below so we can continue the discussion.