Can Marvel keep up the momentum of the last issue? Even if Shingo, (and rightfully so in my opinion) criticized Marvel’s U.S. efforts compared to their U.K. counterpart. I think they can. So lets see how they do. But first, Check out this cover art! 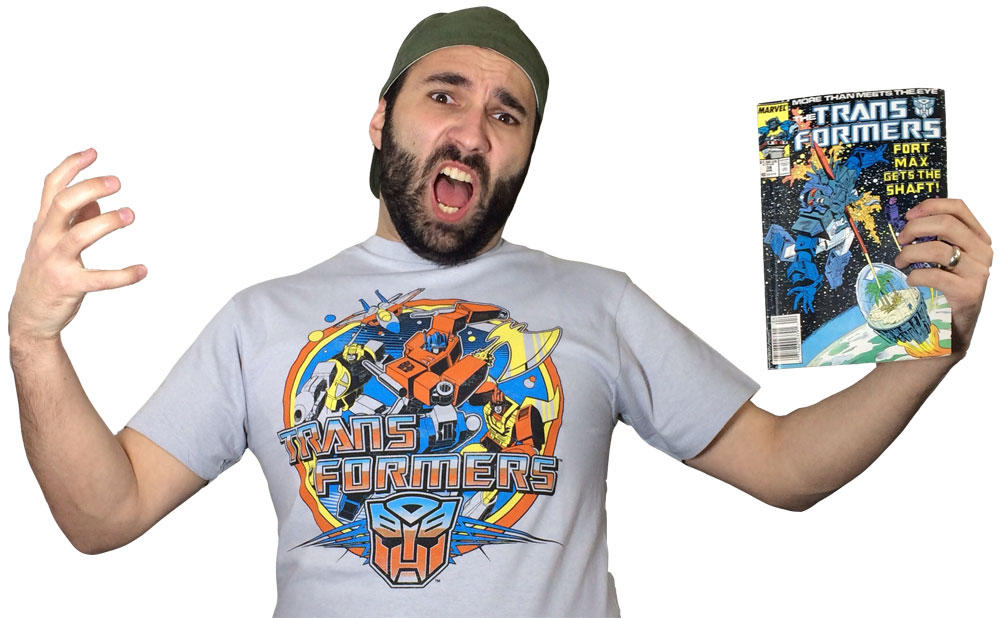 Join The Autobot Battle With This Awesome Transformers Action T-shirt from 80sTees.com

For me this is a fantastically detailed cover. I would say this is the first time we have seen a cover with this kind of detail since the series started. A tropical island encased within the nose cone of a large rocket has launched from Earth and into space.  A missal launched from the center of the rocket through a retractable opening hits Fortress Maximus in space slicing through his body. “FORT MAX GETS THE SHAFT!” is written in yellow right next to him. The damage to Fortress Maximus does not look survivable. Shockwave is flying at him from a distance. 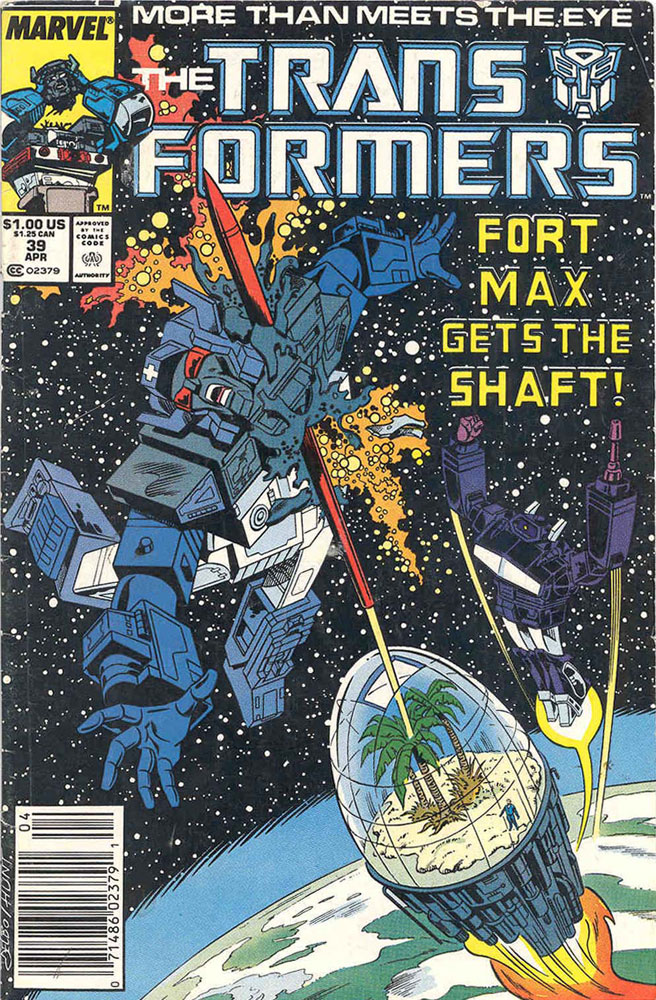 We open up with Buster Witwicky waking up on a tropical island surrounded by Decepticons. Ratbat engages Shockwave in a fuel debate over what it is costing them to keep Buster alive. Shockwave easily wins the conversation over Ratbat after pointing out that the near by human naval armada wont bomb them as long as Buster appears alive. Forrest Forsyth and Walter Barnett of the Triple I group find themselves at a standstill on the naval fleet. Barnett contact Sparkplug Witwicky and updates him on his son. All be it curt.

Spike Witwicky appears at his dad’s Motel room and he tells his dad that he is going out to find Buster. Spike then surprises his dad by tracing the phone call from Barnett by holding the phone line in his hands. Spike is then somewhat forced to show his dad that he is now an Autobot Headmaster and he introduces his dad to the Targetmasters and Fortress Maximus. During the introduction the Autobots question Spikes abilities as a leader fearing he may be to emotional and sentimental.

As the Autobots approach the tropical island, Kup insists that Fortress Maximus remain aboard to provide cover fire for the Targetmasters because he is worried that feelings will interfere with Maximus effectiveness and endanger the team.

As Kup and team approach the island, the island itself unleashes an assault on the Autobots with Blasters and canons. The assault pushes the Autobots back allowing for a clear dome to form around the island into a cone shape. Then the island blasts off into space reveling that it is in fact a rocket ship.

Fortress Maximus leaps onto rocket as it is flying up into the atmosphere. Inside the ship the Decepticons detect Maximus’ presents. Shockwave engages some interesting defensive systems cocks Fortress Maximus free of the rocket and puts him inline with the nose cone of the ship. The tip panel slides away allowing for a rocket to be fired from a palm tree that shoots through Maximus midsection. 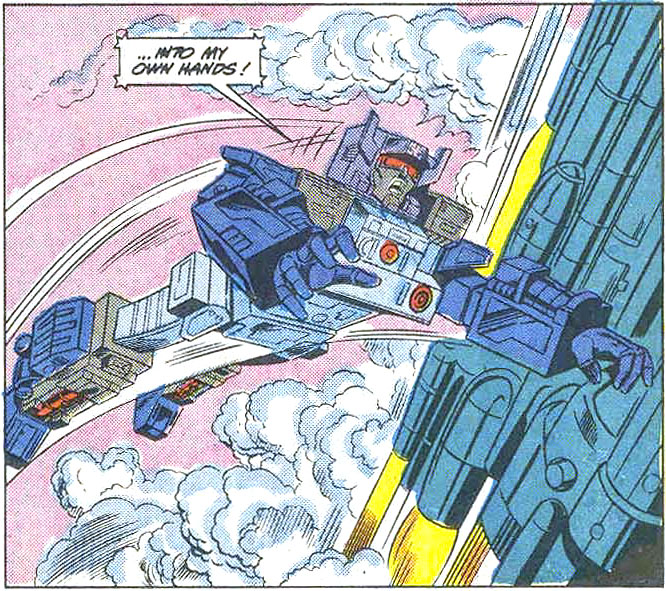 At this point Spike and Buster share a quick visit through the nose cone casing before Ratbat Fires rockets and ship out of Spikes range. The Targetmasters arrive and pick up spike and all of his Autobot parts. Even though he has lost his brother, his fellow Autobots welcome Spike officially to the team after having seen how Shockwave was dealt with. 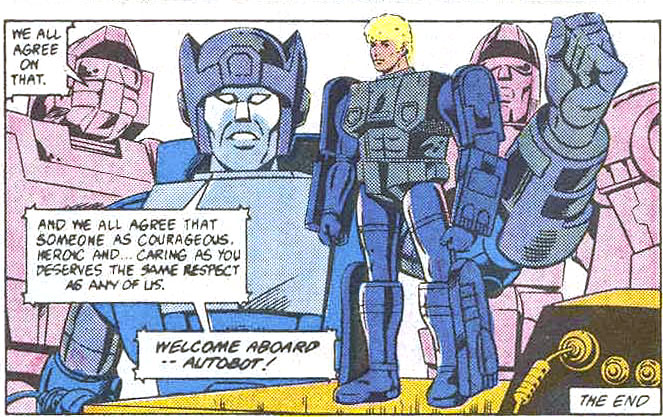 It was hard for me not to enjoy this issue. I felt like the writing and the art was very tight. I have said this before, but this is one of those issues that is just a fun ride.

I find myself really feeling for Sparkplug. Poor guy has lost his business, his home and is living in a motel. He has no idea if his only sons are coming back. This man has sacrificed a lot for the Autobot cause with out fully understanding it. He was a pretty depressing sight this issue. I hope his luck turns around soon.

This was also the first issue of Transformers that I have ever seen anything that might be considered swearing. I was a little taken back by this, but I found it did add a level or realism to the story. 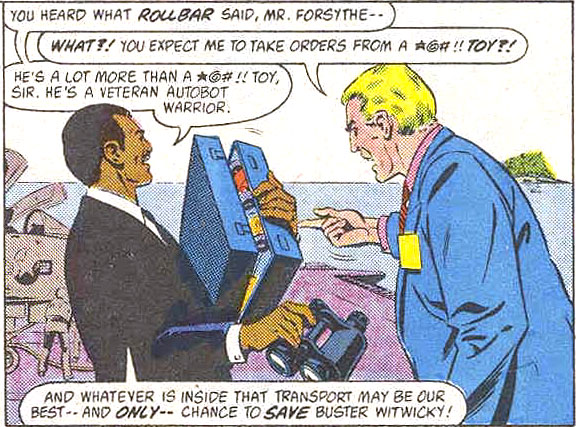 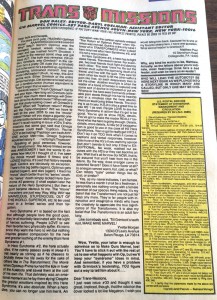 Dear ‘bots and Deceptis,
You guys (and gals) TRASHED Optimus Prime! AAARRRRGGGGGHHHHH!!!! Why? Why?! WHY!?! Optimus was the strongest, kindes, wisest, noblest, etc. robot and you trashed him?!? Shocked, I rushed to the nearest comic shop and got issue #27. The truth was revealed. (Shudder). Grimlock, why Grimlocki? In the cartoon he’s a pretty OK dude (for a Dinobot) but in the comic he’s a puffed-up, egotistical, blundering, bit-brained moron!!! And you made HIM leader! Uh-uh, no way, this ain’t gonna work. either Grimlock or the entire series has to go. Get someone to lead who’s got a cerebro-center (human equivalent is “brain”) larger than a walnut!!!
Grimlock leader? Trash Optimus? i fail to see your logic. How long will Grimlock command? How much more damage will Grimlock do to the Autobot casue? When will you get that goffy-looking crown off Grimlock’s head? When will Trypticon return? Where are the Triple-changers? Will we have to wait till the year 2005 to see the movie robots? When will you stage a gigantic one-on-one battle between Metroplex and Tryption? I recall reading in issue #32’s Transmissions that some guy said that Omega Supreme could trash Trypticon. You’ve GOT to be kidding! trypticon can trash ANYONE except Metroplex. Omega Supreme would be history if he tried to fight Trypticon!
Seapking of good personas, however, The Transformers: The Movie limited series was AWESOME!!! I lack the words to express how MUCH i thought of it. I’ve seen the movie myself (about 9 times) and I LOVED that too. It’s sad that history repeats inself. Comics are obviously no exception. There’s this big battle (again), Optimus gets trashed (again), and dies (again). I liked his “movie” death better than his “Series” death. His “series” death simply lacked Hero Syndrome #2 potency. (I shall explain later the nature of the Hero Syndrome.) But then a point became obvious to me. The “Movie” characters are just way, Way, WAy, WAY too MARVELOUS, STUPENDOUS, OUT OF THIS WORLD, SUPERIOR, etc. to be used once in a limited series and then forgotten.
Hero Syndrome #1 is based on the fact that although people love the good guys, they’re all morbidly facinated with the sight of heroes suffering. People LOVE to see their favorite hero physically suffer. It’s ironic since they want the hero to win but nothing inspires greater compassion for the hero and greater loathing of the enemy than Hero Syndrome #1.
In Hero Syndrome #2, the hero actually dies. If he calmly passes away in sleep it’s not nearly as stirring as if he chooses to brutally throw his life away for the sake of others like in The Transformers: The Movie when Optimus Prime turned the tide in favor of the Autobots and saved them at the cost of his own life. That definitely was an emotional moment as he lay there dying! Despite the greater emotions inspired by the Hero Syndrome, It’s also absolute. When the hero dies, you can no longer use hime/her/it. an exception was the cartoon episode entitled “The Return of Optimus Prime” When Optimus was revived. But this is the only case I know of in TRANSFORMERS when a dead hero returned after Hero Syndrome #2, and it’s not a wise practice.
In Hereo Syndrome #3, a hero has to fight close friends. The reason varies. For example, two best friends must fight and destroy each other. The loser loses his life but the winner must suffer the agonizing death of a friend, and live with the guilt. They care for each other too much to let the other suffer a pain like that, so each desperately tries to kill the other. Another example is when the leader of a band of heroes is captured and some sort of device is implanted or put on. Whenever the hero sees the friends unbearable pain shoots through his/her/its head(s) and in a mindless rage the hero attacks, intent on destroying these friends. The ending is up to you. H.S.3 is also a great time to use HS 1 as well. People LOVE to see the Hero Syndrome in action! But it’s got to be good. You’ve got to show REAL details. You’ve got to make the reader REALLY believe what the hero is going through. Details, details, more details. A little bit of exaggeration is good to use in the case of the Hero Syndromes. You’ve got to really get INTO it. Don’t lay it on TOO think when it comes to captions and verbal responses, however. Use more of the HS’s if you want my opionion (but don’t over do it) but only if they’re EXCEPTIONAL. No weak, washed out excuses with the HS’s or they can backfire on you. Well that’s all for now (for NOW, that is, be assured that you’ll hear from me in the future. By the way, does energon come in assorted flavors? Does it have flavor at all? Is energon served warm, hot, cold, or what? Can robots “Taste” certain things like oil, coal, or similar?
Yes, as my name indicates, I am female. In less than a month I shall be a freshman, I personally see nothing wrong with a femeal member of our species liking robots. It’s my belief that the Transformers are not just for boys any more. They’re for people with innovative and imaginative minds who have the creativity to appreciate the true significance of The Transformers. It is also my belief that The Transformers is an adult fantasy.
Like somebody said, ‘Till Grimlock’s teeth rustm MAIKE MINE MARVEL!
Yvette Morgan
Baton Rouge, LA

Wow, Yvette, your letter is enough to convince us to Make Ours Marvel, too! You’ll have to stick it out with the rest of us to see what happens with Op, but we’ll keep your “syndrome” ideas in mind. And remeber, if you have a problem with Grimlock’s leadershp, YOU figure out a way to tell him about it…

Dear Trans-Missions,
I just read issue #33 and thought it was great. I noticed, though, that the robot on the cover looked a lot like Megatron. I wish you would bring him back, bacause he is one of my favorite characters. I have one question: What kind of learder is Grimlock!?
Matthew Paul
Collegeville, PA

Why, any kind he wants to be, Matthew. Actually, as the letters above yours indicated, most fleshlings think he’s a bad leader, and wish he where an ex-leader!
—
WHO WILL LEAD THE AUTOBOTS? BE HERE NEXT ISSUE AS WE PLUNGE INTO A STORYLINE WHICH MANY ARE CALLED, BUT ONLY ONE MAY BE CHOSEN! 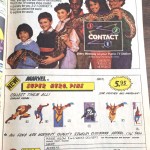