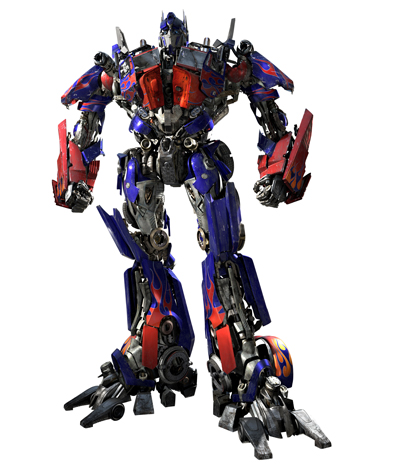 This is supposed to be Optumis Prime

Yup, I saw Transformers 2, and it was a cinematic abortion. A phrase I have used on Twitter, and Facebook when asked about the sequel to the first live action mistake that Micheal Bay directed in 2007.

Now I know I have said I would never pay to see Transformers 2. I started saying that shortly after seeing the first film. Truth be told I didn’t. A good friend of mine paid for my ticket to see the movie. Partly as a joke. Partly because of the friends we went with like to see me rant and rave about it. But mostly to celebrate the birthday of a good friend.

The movie so rudely, and blatantly went against the 25 year history that Hasbro has with Transformers. Micheal Bay probably can’t tell you a thing about the Transformers mythology. Rather then reading up on it, he reinvented it, changing just about every single aspect of the Transformers story line. He would talk on his website, and forum, explaining his process of auditioning a couple of the original voice actors for the movie parts. It came off as if he was doing all the fans of Transformers a huge favor. As if auditioning them, and giving the voice actgers a roll in his movie would make all his  re-imagining of a 25 year old beloved mythology, acceptable to the fans.

With the release of Transformers 2 I can easily say I am not the only one who was disappointed with this movie. Professionals in the industry are also not happy with it.

…a horrible experience of unbearable length.”  “The day will come when Transformers: Revenge of the Fallen will be studied in film classes and shown at cult film festivals. It will be seen, in retrospect, as marking the end of an era. Of course there will be many more CGI-based action epics, but never again one this bloated, excessive, incomprehensible, long (149 minutes) or expensive (more than $200 million).” Roger Ebert

Transformers 2 has a shot at the title Worst Movie of the Decade. Peter Travers of Rolling Stones

for the uninitiated, it’s loud, tedious, and at 147 minutes, way too long. Ray Bennett of the Hollywood Reporter

As I have said before I hope that these Transformers movies bring some interest to people to go back and read and watch the original stories. I hope before I die someone comes along and makes a Transformers movie that should have been made.