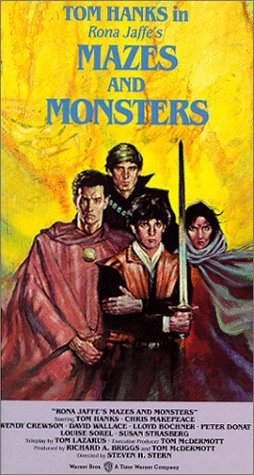 I wrote in an older post that I learned about the movie “Mazes and Monsters“. It’s a 1982 movie about a group of college students and their interest in a fictitious role-playing game (RPG) of the same name staring Tom Hanks. The film was adapted from a novel of the same name by Rona Jaffe. Jaffe had based her 1981 novel on inaccurate newspaper stories about the disappearance of James Dallas Egbert III from Michigan State University in 1979.

Being into Dungeons and Dragons as much as I have been lately, I thought it would be fun to Netflix this movie and watch it. Well I did just that. I Netflix it, and watched it this last weekend.

Mazes and Monsters was not to bad. Actually, it was bad.  It is a low budget, 1982 movie. The source film they used for the DVD transfer was not the best. There times where the film looks faded and spotty. At one point in the movie there is a bug that crawls from the bottom of the screen, to the top. (How the hell does that happen? How dose that end up on the film?) But you know, for me, it was a fun and silly movie to watch. Because of that it was not to bad.

There are even a few scene that take place inside the World Trade Center.