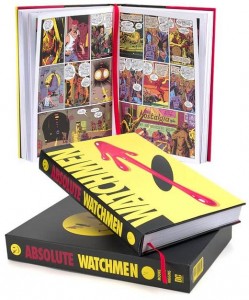 I recently finished reading the “Watchmen” graphic novel. It was written by Alan More, with artist Dave Gibbons, and colorist John Higgins and came out between 1986 and 1987 as a 12 issue comic book by DC Comics.

I wanted to read the Watchmen because of the movie coming out based on the graphic novel. I found most of the book very difficult to read. It’s a very wordy book with less action then your average Batman comic book would have.

Along the way of reading Watchmen, I found through out the book supplemental fictional documents about characters, or just random back story elements that really did help me tie the whole Watchmen story together. Things like this in a graphic novel really do separate it from all the others on the book shelf.

The whole thing for me really didn’t pull it’s self together till the very, very end. It truly was a mind fuck that you don’t see coming. I found myself suddenly pulled into the story and mentally putting all the mixed up pieces together. The closest thing I can compare this book to is the movie “Unbreakable“. 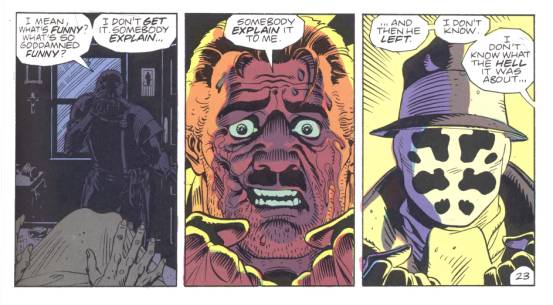 Watchmen is set in an alternate reality which closely mirrors the contemporary world of the 1980s. The primary point of divergence is the presence of superheroes. Their existence in this iteration of America is shown to have dramatically affected and altered the outcomes of real-world events such as the Vietnam War and Richard Nixon. In keeping with the realism of the series, although the costumed crime fighters of and the presidency of Watchmen are commonly called “superheroes”, the only character in the principal cast who possesses obvious superhuman powers is Doctor Manhattan. The existence of Doctor Manhattan has given the U.S. a strategic advantage over the Soviet Union, which has increased tensions between the nations. Additionally, superheroes have become unpopular among the public, which has led to the passage of legislation in 1977 to outlaw them. While many of the heroes retired, Doctor Manhattan and the Comedian operate as government-sanctioned agents, and Rorschach continues to operate outside of the law.