There are no comic book shops in Juneau. I came to this depressing realization after living here for a few months. The grocery stores are the only places in the city you can go to and get comic books. The Selections at the grocery stores are minimal and poorly handled by the staff that stocks the magazine racks. You just want to slap some comic book edict into every store employee that walks by.

Last Saturday I forgot about all of that. Last Saturday, everything changed for just one moment. I was at the “Friends of the Library Book Store” by the airport with Hannah. This is a store where people donate old and used book to be resold. Just as we had finished browsing and started to walk out the door I gasped.

“You have comics?” I said pointing to an old bin with haphazardly placed comics books.

“oh yeah, just that one bin though” she replied. 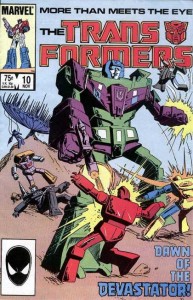 I gently dug through the bin while Hannah waited. Inside I found what was to me, a small treasure. Comics like the first issues of “The Crow” and “Marvel Universe” and “He-Man”. I could not believe it. I kept on digging and found the first few issues to the “Marvel Saga” and “Rawhide Kid”. But then I struck pay dirt.