Issue 79. Next to last. The sign of a good story is that you don’t want it to end. I don’t want Transformers to end. Maybe it will be a good thing. To end on a high note before it goes bad. I guess I’ll know when I finish with issue 80. In the mean team lets review Issue 79. But first, lets check out this cover! 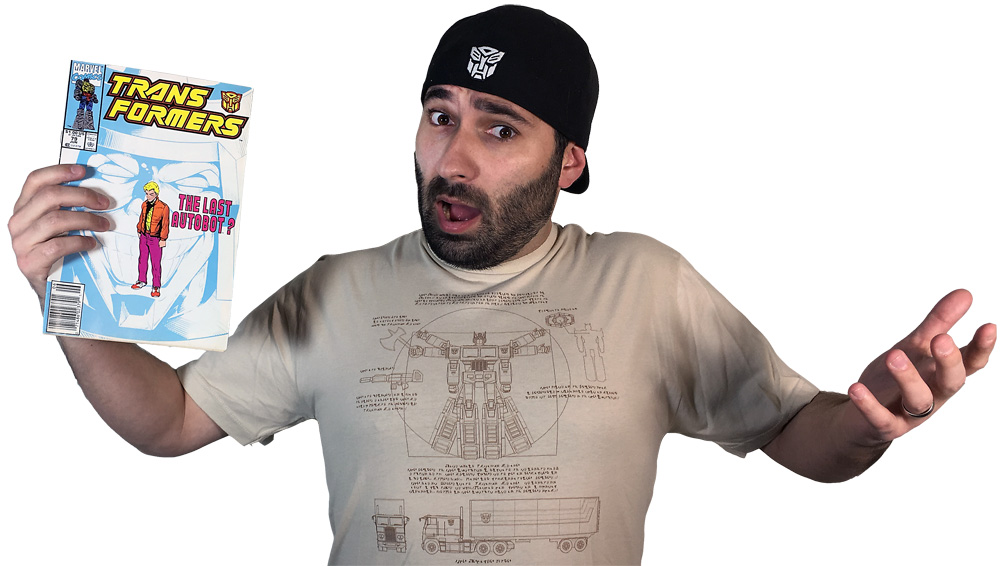 Great Transformers Shirts Can Be Found At 80sTees.com

The cover is dominated by the ghostly looking face of Galvatron. A crazed smile across it makes it some what hard to pinpoint as Galvatron for me. Spike Witwicky, baring no resemblance to his Saturday morning cartoon counterpart, looks lost in deep through. Almost upset looking. “The Last Autobot?” is written on the cover. It’s not a bad cover. But I don’t think I love it because nothing about it feels iconic Transformers. 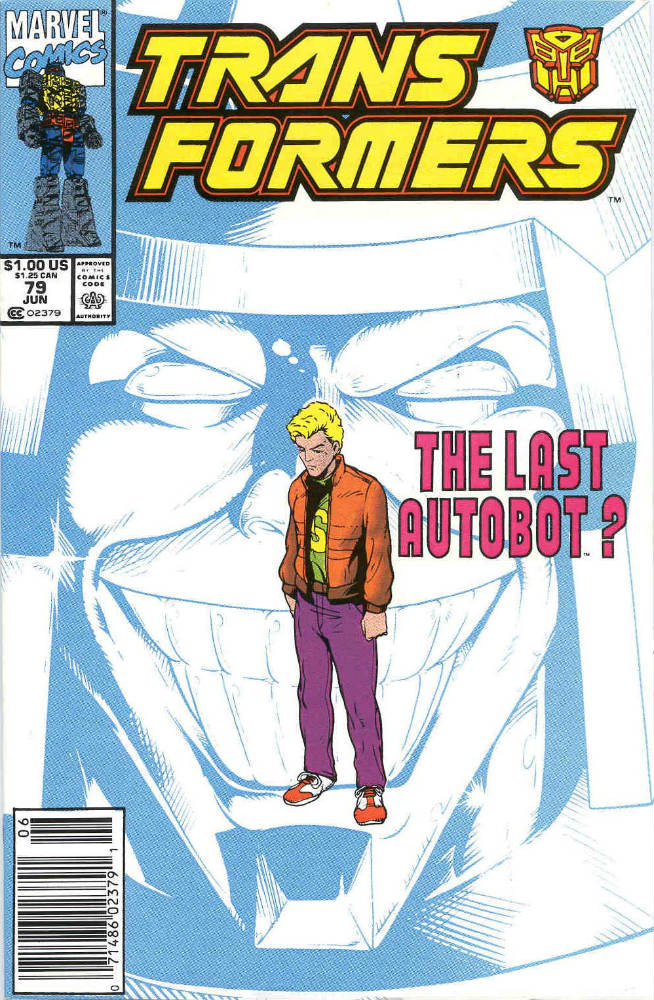 Having crashed landed on Earth, the Autobot Ark is host to a new villain this planet has yet to see. Spike realizes he is the last Autobot left to defend the planet. He reluctantly rejoins with Fortress Maximus to go after Galvatron. 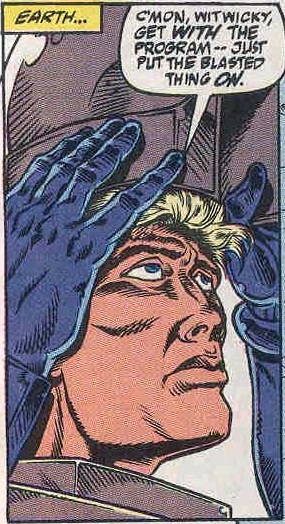 On the planet of Cybertron, the Neo-Knights and Hi-Q have escaped from their cell and are now completely alone on the dying planet. Their mission is to find the last Autobot who will prove to be the salvation for the planet. 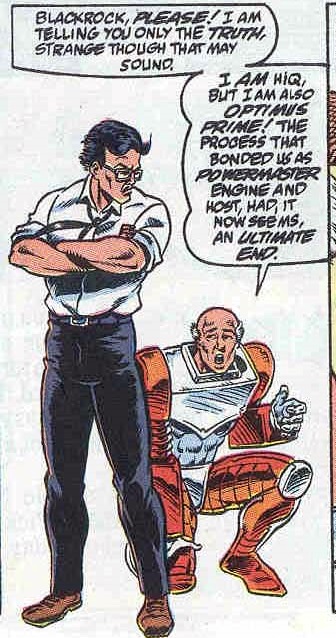 The remaining Autobots are hot after the Decepticons, following their tracer signal hidding on their ship by Grimlock. They are headed to the planet Klo where they hope to stop the Decepticons before they can cause to much damage. 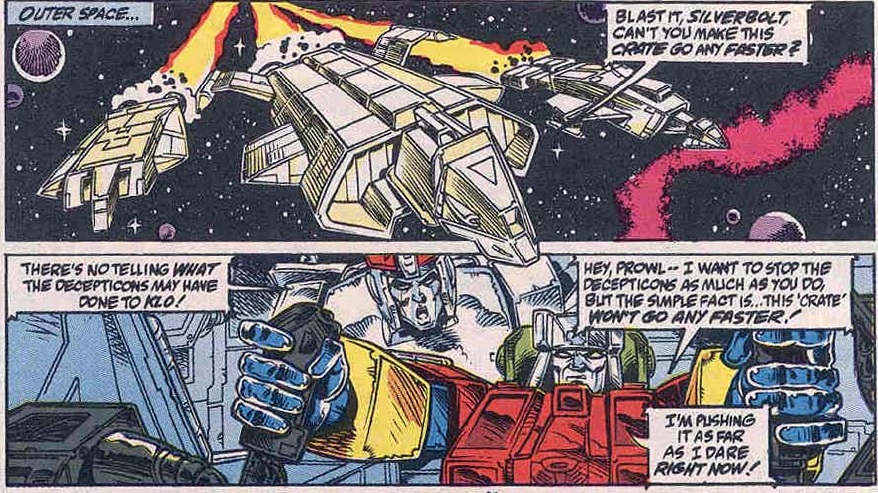 Returning to Cybertron to close out issue 79, The Neo-Knights have found the last Autobot. 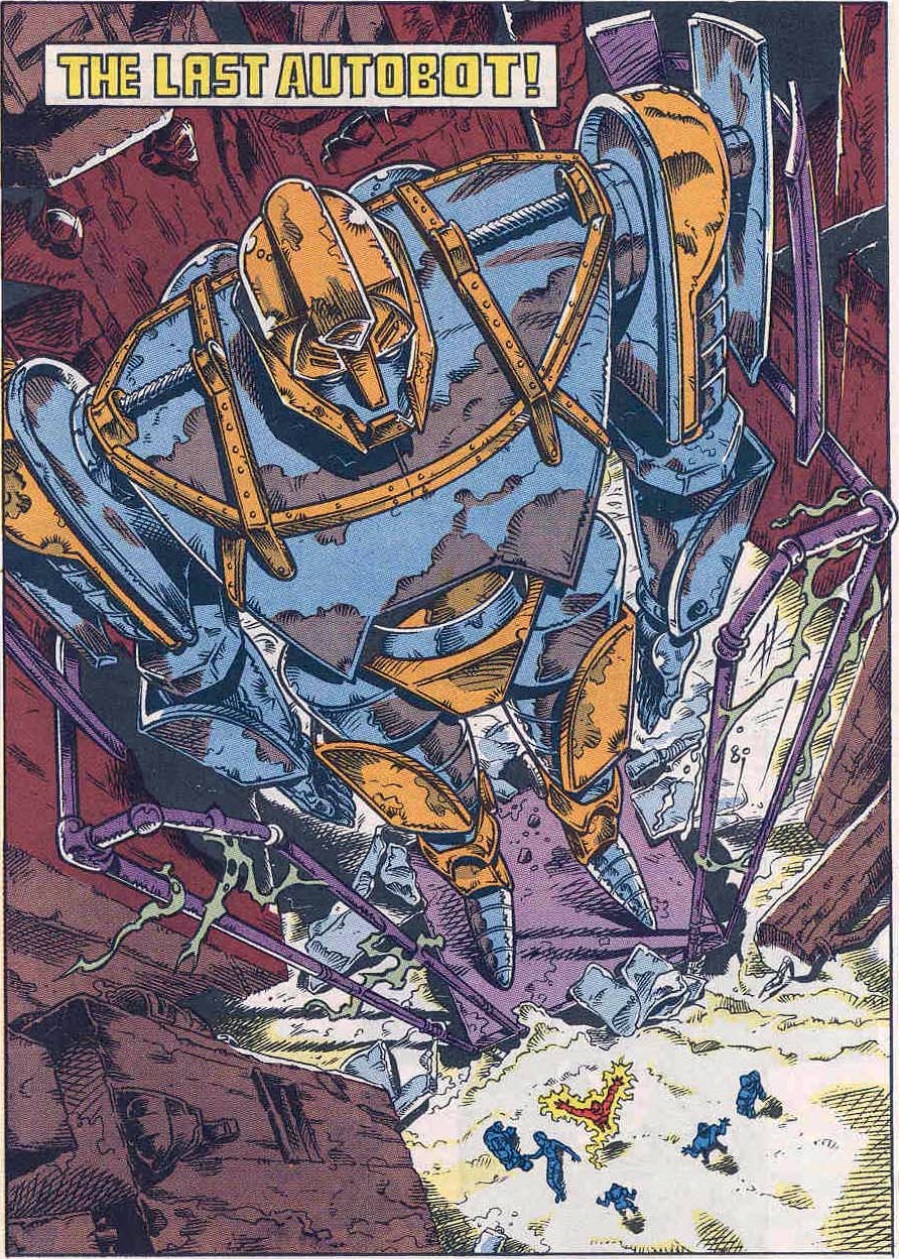 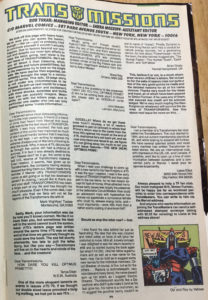 We kick off this page with heavy heart. We’re sure you can guess the reason, though-like us-you’ve probably tried to convince yourself it wouldn’t actually happen. Due to factors beyond our control and despite our most epic efforts to keep the book going, next issue is the last issue of TRANSFORMERs. We’ll tell you all about it then (reasons, whys, wherefores and future possibilities), but in the meantime try to look on the bright side. We have (earlier than expected, admittedly) brought the saga to a conclusion (of sorts). This epic, 22-page story, is not under any circumstances to be missed. So join us next month for a feast of Transformers action and excitement, with more shocks, surprises and thrills than you can possibly imagine. Meanwhile, on with the letters page, and in particular one reader who (we can only guess) had some ‘inside information’…

Dear Transmissions,
I received some most distressing information in the mail yesterday. A friend of a friend of mine had heard from Marvel that issue #80 was to be the last issue of TRANSFORMERS. I was truly shocked; the look and content of the comic has improved so much of late I could hardly believe that it was truly on its last legs. I am writing to express my extreme disapproval of Marvel’s choosing to drop the book. Why, in issue #75, did you act as though the comic still had a chance of survival, if in fact it was already destined to die? Please don’t let it go, the comic is the last U.S. source of Transformers material. Even Hasbro, it seems, has given up on Transformers, the company has recently stopped turning them out. Which leads me to wonder if Marvel UK’s TRANSFORMERS comic is still going or is that too destined to perish? In closing, i would like to thank you and your staff. TRANSFORMERS has been a large part of my life and has brought me much pleasure. Even if the comic dies, I can assure you that we fans will not let the legend of the Transformers die with it!
Mark ‘Highflyer’ Tisdale
Montexuma, GA

Sadly, Mark, your information was ( as by now you’ll know) correct. We like it no more than you, but sometimes the best will in the world cannot buck the system. Issue #75’s letters page was written around the same time #72 was on sale, and at that time we genuinely thought we could save the book. The axe fell shortly afterwords, too late to pull the letter. Sorry, but like you say-Transformers will live on in the hearts and minds of the fans…and the creators!

One of the more eloquent laments on events in issue #75/76/ If we thought our double sized issue provoked a bulging mailbag, we had yet to see 76’s…

Dear Transmissions,
What’s going on? Prime’s dead(!) Again(!)? Well, I have a feeling that we’ve not seen the last of him, and that’s especially evident in HiQ’s revolutionary mannerisms. TRANSFORMERS #76 was ultimately stupendous! I thoroughly enjoyed the unpredictable climax of the Big Freeze epic and Grimlock’s magnificent evolution from Dinbot to Action Master!
Steve Beg
Ontario

Dear Transmissions,
I have a few questions I’d like answered. 1) WHY DID YOU KILL OPTIMUS PRIME? 2) Will he be coming back soon? 3) Would you please start up GODZILLA comic again?
John Webster
Lanham, Maryland

GODZILLA? Where do we get these ones from?! Anyway, a lot of readers guessed in part or (almost) in whole that Prime’s return was in the cards from the time HiQ opened his mouth at the end of #76. And since he’s not back yet, and we now only have one issue to go, we figure it’s not giving away too much to tell you next issue features-THE NEW (NEW) OPTIMUS PRIME!

Dear Transmissions,
When I read your challenge to come up with a new name for the Neo-Knights in #75 it was the spur I needed. I read a few early issue of TRANSFORMERS and then stopped in the low teens, for no real reason except for lack of money. What attracted me to those early issues was largely the presence of the delectable Circuit Breaker. How could an adolescent male with hyperactive hormones not appreciate a curvaceous female who could fly, release energy bolds, and-most importantly- wore little more than a rather scanty coating of aluminum foil?

Should we stop this letter now?-Rob

I also found the idea behind her just as fascinating; the idea that she was crippled and relied solely on force of will (plus her costume) to move. all in all, a lovely concept. I was delighted to see her return recently in #68 and so started buying the book again (so what if I’m 23!). I like her fellow superhumans and as well as a new name for the team, may I be so bold as to suggest some new names for the individual memebers. Circuit Breaker, of course, is fine, but as for the others. . . Rapture ( a technotelepath, very nice idea and nicely done), the name doesn’t sum up her talent, so I suggest ‘Electric Dreams’. Thunderpunch sounds like a Decepticon who didn’t quite make it (and as his feet grow too, his name is a misnomer), so I’ll suggest the punchier (sorry, couldn’t resist it) name of ‘Impact.’ Finally, Dynamo is the one thing Hector isn’t! He’s a conduit for natural energy sources, not a generating device. So how about ‘Powerhouse’-As for the team, the alternatives I suggest are, ‘The Human Factor’,’The Human Touch’,’Earth Guard’, and ‘Soft Metal.’
Brian Doyle
Hamel Hampstead, UK

This, believe it or not, is a much shortened versin of Brian’s letter. We’ve had to (for the same of space) miss out quite a few of the very good points he made and the detailed reasons for all of his name choices. Thanks very much for the ideas and input, all of which have been passed to Simon Furman. If he uses any of them, rest assured due credit will be acknowledged. We’re very much hoping the Neo-Knights (or whatever) will survive the demise of TRANSFORMERS. See this space next issue for more on this. . .

Dear Transmissions,
I am a member of a Transformers fan club called the TransMasters. The club started in 1984, and our current membership stands at 45, and we’re looking to expand still further. We have several talented artists and most every member has written Transformer related stories. We are an international club with members in the US, UK, and Canada. If possible, we’d like to open up a line of communication between ourselves and a concerned party at Marvel. I aware your response expectantly.
Liane Elliot
Gig Harbor, WA

Always pleased to help a TF fan club. Our much maligned Brit, Simon Furman, will be happy (as far as workload permits) to enter into correspondence with TransMasters. You can write to him via the Marvel address.
And anyone who wants information on joining the TransMasters can send a self addressed stamped envelope (along with $0.25 for xeroxing) to Liane at the address above!

I thought by issue 79 the story would feel rushed. Thats the impression I get when talking to other people involved in the Transformers fandom. That Simon Furman was rushed to end the story. Well, if he was, it sure doesn’t feel like it.

Galvatron got a fitting close out. If this is in fact the last we see of him. I am sure if the series wasn’t coming to an end, Galvatron might have had a bigger and longer lasting role. But I’m happy with this so far.

The Neo-Knights are annoying me like I thought they would. I couldn’t be more happy with that.

I don’t know that I like the whole Hi-Q Powermaster/Optimus Prime angle. Maybe that’s what people are referring to when they say they feel the story was rushed to conclude. But for me, that’s the only weak part of the story. This could also be because I’ve never been a fan of the whole Powermaster thing. Never should have happened and Hasbro forced it on Marvel.

So what did you all think of this issue? You like it? You hate it? Lets talk in the comment section. Maybe I can learn some new insight I didn’t already.