Transformers issue 78. Two more issues and it will all be over. But lets not focus on the sad. Lets focus on the story at hand. But before we can do that, lets check out this cover!

Get Your Transformers Shirts From 80sTees.com

We have before us a beautiful cover. Galvatron stands front and center with a shadow of Megatron before his feet. Behind Galvatron is a wall of cracked, broken glass and in every single reflective peace we see Megatron. The only real look at him on this cover is reflected from the glass behind Galvatron. “Past and future collide as… Galvatron battles Megatron!” is written on the bottom right of the cover. The Transformers logo has also been rendered out to match the glass fragments of the background. It’s a beautiful cover and a very telling cover at that. 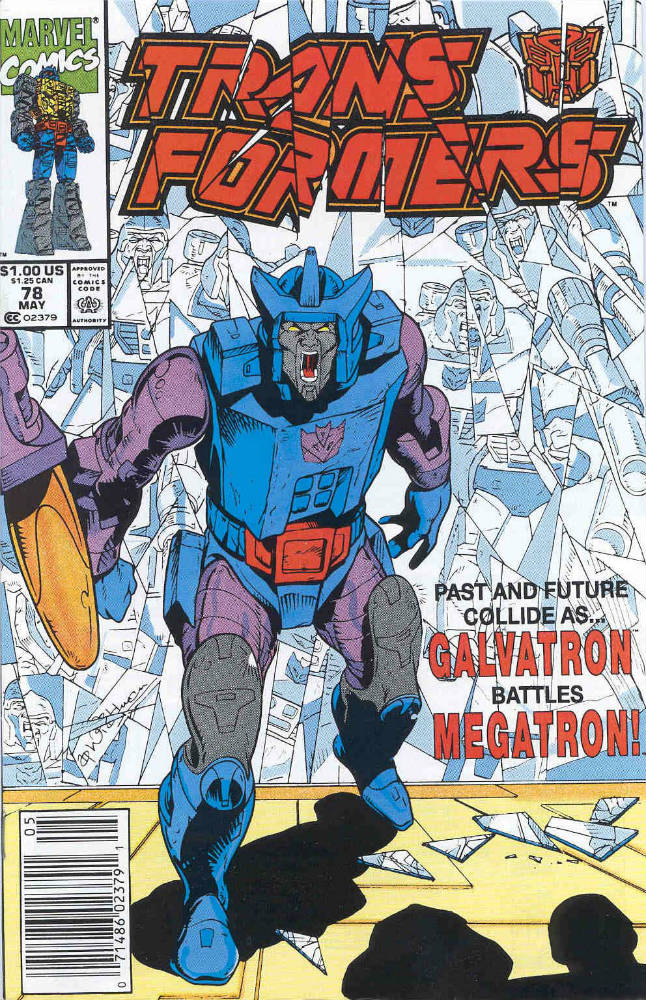 On the Autobot Ark, Galvatron replays his past. Pretty much mirroring the 1986 animated Transformers movie from when Metagron is thrown from Astrotrain in space and is found and rebuilt by Unicron. Snapping out of it, Galvatron starts to pummel Megatron. Hating his former self. Megatron’s lacks reaction to this. He is still somewhat mind linked with Ratchet. 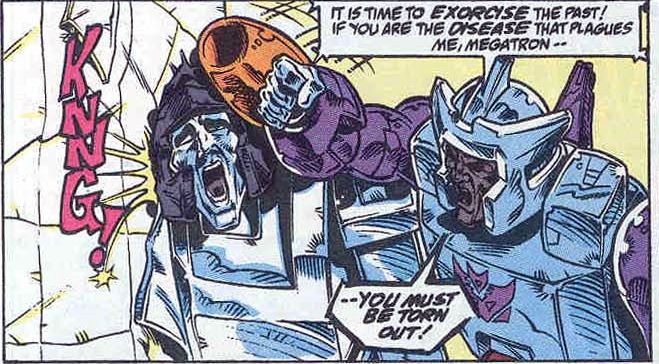 On the bridge of the Ark, Starscream detects life on his monitors within the ship. He and Shockwave investigate.

Ratchet himself soon is freed from the stasis pod and soon realizes that a link between himself and Megatron remains. Around this time Galvatron stops beating Megatron to death fearing that his death may somehow affect his life. Galvatron walks away for a moment to gather his thoughts.

Back on Cybertron, Prowl is feeling like a proper ass. His choices have led to the Autobots being stranded to die on the planet. Then, Grimlock arrives, bringing with him hope. Hope in the form of a Decepticon battle cruisers which he hid away millions of years ago just in case. The Autobots now have a chance to live.

Returning to the Ark, Ratchet really gives Starscream what for. Megatron and Galvatron now are on the same page and work together as they turn on Shockwave. Ratchet knows the two Decepticon leaders are to powerful to be allowed to be free. So, the Nucleon is exploded, causing the Ark to crash land on earth….again…just like 4 million years ago. 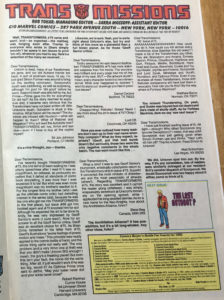 75 came and went, and-as expected-the mailbag was building soon after. Thanks to everyone who wrote in (there simply wouldn’t be space in ten issues to print ’em all), whatever you had to say. Here’s a selection of the many we received…

Dear Transmissions,
Unicron is dead, many of our Transformers are gone, and our old Autobot friends are back. A sort of landmark issue, I’d say. I’m just glad Simon Furman was around to bring us this exciting conclusion. Scorponok’s death was saddening, as well as surprising, although i’m glad he ‘did good’ before he went. Xaaron’s death was also felt by me, but Prime-Prime gave his life for everything! Or did he?! As the story reached it’s explosive end, it became very obvious that the Transformers have not been written off. With Unicron’s death, Galvatron is stuck in this timeline. What havoc will he cause? the Autobots are infused with Nucleon-what will happen to them? What of ratchet and Megatron? Who will lead the Autobots now? TRANSFORMERS will live, thrive and survive-even if I have to buy all the copies myself.
Sir John Johnson
Portland, CT

Dear Transmissions,
I’ve recently bought TRANSFORMERS #75, the one we’ve all been waiting for. I was utterly speechless after I read it! It was so magnificent, so colossal, so profoundly excellent that it defied all standards of comic book storytelling. It was more than I ever expected it to be! But what was even more magnificent was my brother’s reaction to it. For the longest time my brother (who I see as the ultimate comic critic) had dwindling interest int he series (odd, because he was the on who got me into TRANSFORMERS in the first place), but issue #69 got him hooked again and #75 knocked him for six! Although he expected the art to be done by Andy, he was very impressed by Geoff Senior’s work (i sure was!). Now for an answer to all the Geoff Senior critics. Geoff was an excellent choice for #75. As Brian Orms remarked in his letter from #70, Geoff’s illustrations “evoke feelings of power, motion and mass.” this principle was neatly applied to the cosmic battle at hand, and the whole thing came out really well. The only problem (and a very minor one at that) was that you didn’t make Unicron BIG enough! I mean, the guy’s a freaking planet! But even this isn’t your fault, the movie did the same thing. AFter all, it ust wouldn’t work if he was too big, would it? As Optimus Prime once said to Jetfire, “May your luster never dull and your wires never cross.”
Robert Ramirez
Cambridge, MA

Likewise, We’re sure . Yeah, you’re sorta right about Unicron’s size, but try and think of him more as a planetoid than a full blow planet. As for those ‘Geoff Senior critics’…

Dear Transmisions,
Totally awesome! An epic beyond duplication! Transformers #75 had more action and suspense than the movie. The storyline was brilliant and every page had me on the edge of my seat. BUT-the art work stuck! I mean, every character looked so two-dimensional. Whatever happened to detailed ‘I want to stand out’ drawings you had in previous issues?
Daniel Cecava
Bedfor, TX

Have you ever noticed how many readers don’t own up to their real name when they complain? What do they expect reprisals? (Geoff, put that mail bomb down!) But seriously, these two were the only negative comments in the whole batch. The rest went much like this…

Dear Transmissions,
What a relief it was to see Geoff Senior’s triumphant, artistically cataclysmic return to the Transformers strip in issue #75. Superb! It converted the most nihilistic of disbelieves and the most pessimistic of atheists (whew!). Regarding TRANSFORMERS 375, the story was excellent and it carried the reader along unfettered. I was simply unspeakably awestruck at unicron’s immensity on the opening spread, while I applauded his long-awaited demise. As for a new name for the New-Knights, how about the Annihilation Alliance, hmmm?
Steve Beg
Canada

The Annihilation Alliance? It has possibilities, but it’s a bit long-winded. Any other ideas, folks?

Dear Transmissions,
RE: issue #75…
AAAAAAAAAAHHHHHHHHH! How could you do it, how could you kill almost every Transformer alive (besides the old ones)> I made a list of the Transformers you killed. They are: Brainstorm and Arcana, Emirate Xaaron, Primus, Cloudburst, Highbrow and Gort, Finback, Misfire, Bombburst, Hardhead and Duros, Waverider, Quake and tiptop.Heater, Joyride and Hotwire, Scorponok and Lord Zarak, Mindwipe and Vorath, Runabout, and Optimus Prime. Even if you re-create all these Transformers, Those with Nebulan companions will have lost them irrevocably. How can you fix this? By the way, where is Fortress Maximus?
Matthew Barse
Norman, OK

You missed Thunderwing. Oh yeah, and Quake was injured but not destroyed (he’s made of sturdy stuff). As for Fortress Maximus, dare we say ‘see next issue’?

Dear Transmissions,
I have ust finished reading issue #75. All right-enought! Who killed Scorponok (my favorite Decepticon)? I mean, that was cold! Scorponok was just getting good when Simon Furman ups and thinks, “Hey! Let’s kill him off!” Thanks a bunch. Feed Simon to Unicron!
Matt Brittenham
Las Vegas, NV

We did. Unicron spat him out. By the way, if it’s any consolation, lots of readers were similarly outraged at our resident Brit’s cavalier dispatch of Scorponok. We doubt Scorponok was too happy about it either, come to think of it.

I should have said this sooner. I feel like I have failed by not saying it sooner. But I should have said it sooner. What the fuck has Simon Furman done to Blaster? Blaster was a bad ass. Leader material. Now he’s kind of a recon guy. What gives? The best explanation I can come up with is that something happened with Blaster in the UK comics to put him in this role he now occupies. If this is the case, I’ll learn about it when I do get around to reading the uk books.

Okay, the art (except for Blasters render), is pretty awesome. Beautiful even. And that cover! wow.

I’m impressed with the sarcastic shit talking that Starscream gets away with in front of Shockwave.

Still, so many loose threads and only two issues left. While, I’m reading the next issue why don’t you all comment below and let me know what you thought of this issue. I would love to chat about it with you.