Issue 74, the Void!. I have experienced such a build up to the promise of an epic battle in the last few issues. Will I get my pay off with issue 74? We’ll find out, but first lets check out this cover art! 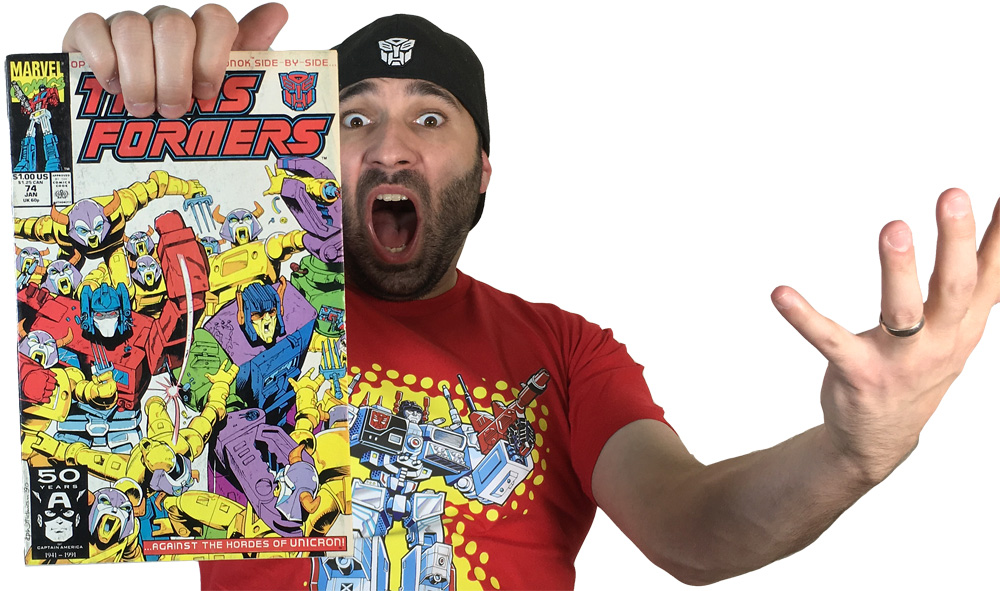 Side-by-side, on the cover of issue 74 we find Powermaster Optimus Prime and Scorponok fighting a group of robots wearing Unicron masks. The cover even reads, “Optimus Prime and Scorponok Side-By-Side Against the hordes of Unicron!” The Autobot and Decepticon look battle damaged. Might be do to the battles they have been involved with during the last few issues. The cover doesn’t blow me away. Maybe it’s because Powermaster Prime is on the cover. Maybe it’s because the other bots that they are fighting don’t resemble any Transformers I’ve seen so far. I’m not sure. So lets jump into this issue and find out what the hell is going on. 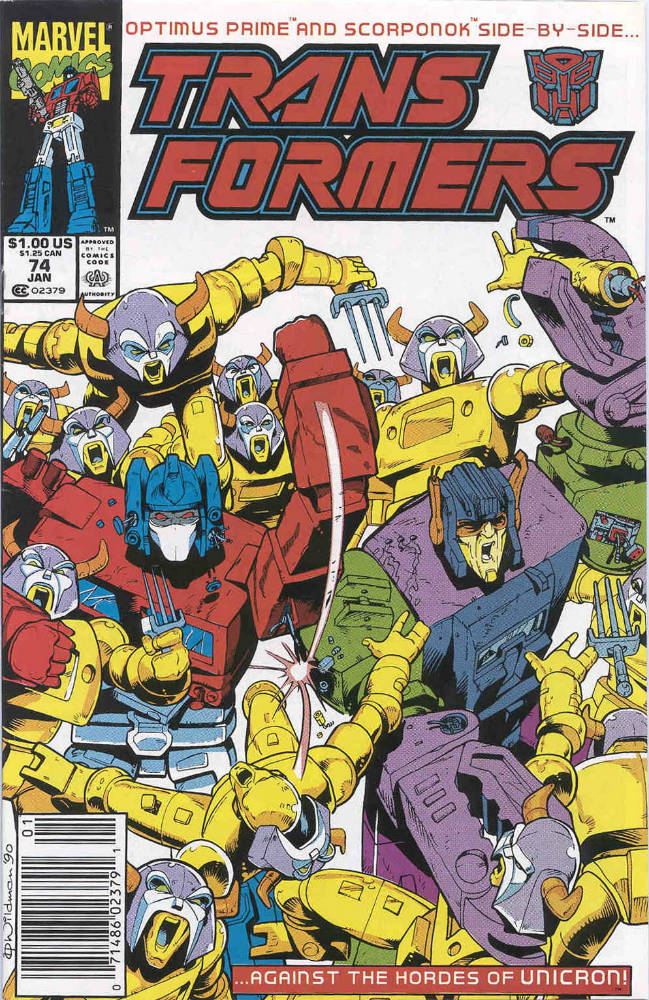 The issue starts off with the retelling of the origins of the Transformers. The story told through Emirate Xaaron while under control by Primus. Though, not all gathered who are listening to this tail are pleased.

The story then cuts to the Ark. The Dinobots have returned to find the ship empty and no Transformers left on Earth. Grimlock gives the order to pump Nuclean into the stasis pods in an effort to revive the fallen bots. The effort is rushed and the Dinobots fail to see that Megatron is among those in the pods.

Now back on Cybertron, G.B. Blackrock asks Optimus Prime to have Primus return him and the Neo-Knights back to earth because Circuit Breaker can’t mentally handle being surrounded by all these Transformers.

In the next scene we learn that Unicron has assembled a group of mind-controled Transformers with the intent of bringing death to Opimus Prime as he has been chosen to lead the battle against the planet sized bot. 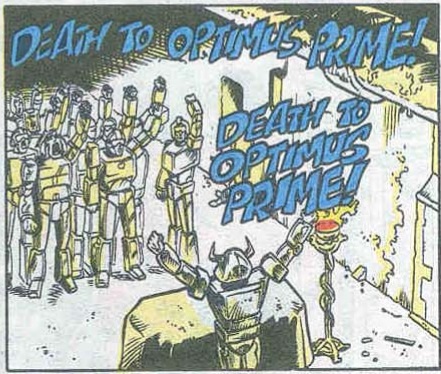 Scorponok confides in Optimus Prime that he is afraid of dying. Prime is in agreement with Scorponok, and also expresses his concerns over Primus. Above all of that Prime still will face death honorably, like an Autobot should. While the two leaders talk they are attacked by the mind controlled Unicron Transformers. 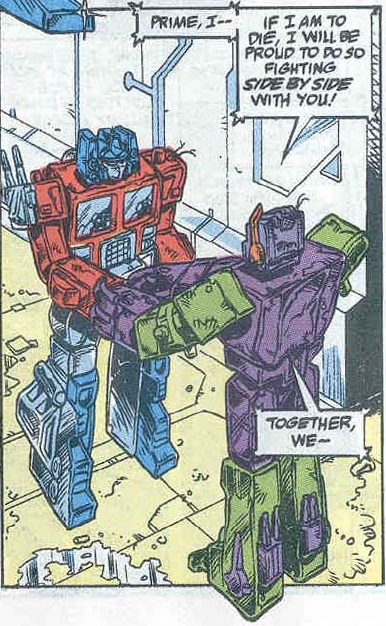 During the fight, Scorponok realizes that the Unicron followers are only interested in fighting Optimus Prime. He then enters the fray and saves Prime’s life. One Unicron controled minion, readies a grenade for Optimus Prime that will surly kill him. Just as he is about to lob it, Galvatron steps in and stops him, then signals for help.

Autobots and Decepticons arrive to help and the battle turns for the better. That is until Unicron arrives. 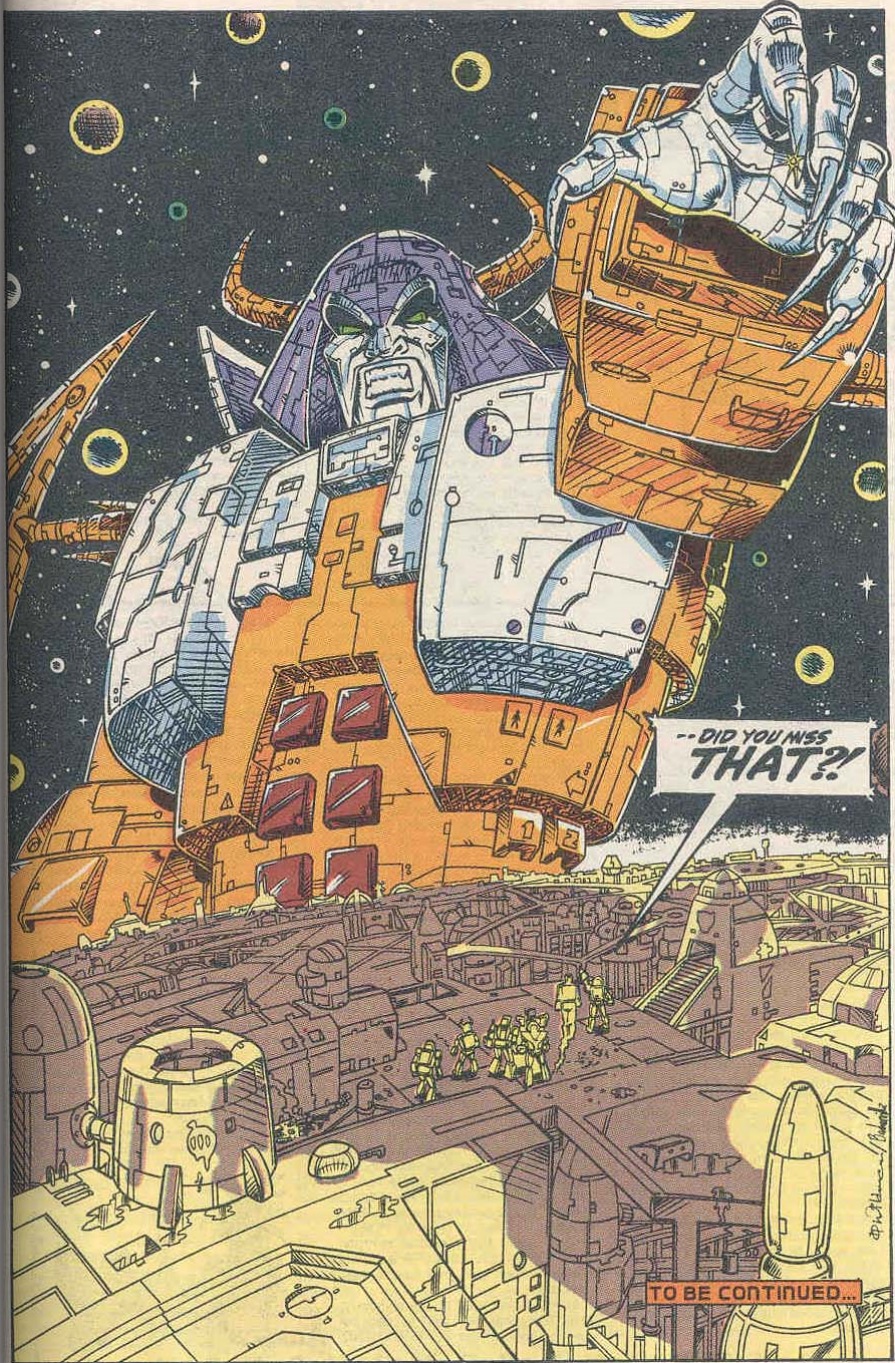 Elsewhere in the galaxy, The Creation Matrix has repaired Thunderwing and is now out for revenge.

So, maybe I missed something in the last issue, but the thing that caught me off guard here was that the Neo-Knights arrived with the Transformers on Cybertron. Why? That makes no sense to me. Their presences didn’t mess up the story. I just can’t understand why they are are there.

Clearly Prime is suspicious of Xaaron and Primus. It reminds me of Star Trek V: The Final Frontier, where Kirk starts questioning God.

Galvatron’s motives in this issue, as they have been, are purely selfish. I feel like he is playing the role of chess master, while he moves all the other characters into position.

Nevertheless, I’m dying to find out what happens next. But before I get to issue 75, I would love to hear what you all thought of this issue. Leave me a comment and lets talk about this issue. 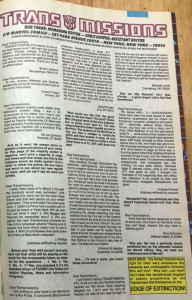 TRANSFORMERS #70 was by far one of the best issues ever! I still can’t get over the artwork. Please, please, PLEASE keep Wildman and Baskerville on this book! At last, the Transformers are getting the detail and action they deserve. Thank you for an excellent issue!

To me, Andrew Wildman and Stephen Baskerville are by far the best artistic team in the comic field today!

I can’t believe anyone could dislike Andy Wildman’s artwork. Okay, I was a bit nonplussed at his debut, but I love it now, especially when he is paired with such talent as Stephen Baskerville, Ol’ Steve can draw excellent Transformers in his own right, and the two together are a knockout! This book has never been better!

And so it went. We always strive to present a balanced picture of your views on this page (if the majority verdict is negative, we’ll print a majority of negative views and vice versa), but this is one instance where we really couldn’t find a letter to offset the praise. No one had a bad word to say about our new regular art team, and we can’t say we were surprised.

I really liked issue #71. Who’d a’ thought the Autobots would ever surrender? Let’s just hope this turns out for the best! Keep Simon and the wild person as your writer/artist team. They’re the best! I’ve a few questions: 1. Optimus Prime has a sudden pain in his gut and issue or three back. Will we ever find out what it was? 2. Will Meggie and Ratchet be separated soon? 3.  Will you gather the new Transformers Universe entries into a collected volume? There’s a lot of people out here who’d dearly love to see it done. 4. Will Circuit Breaker ever settle down and marry a Macintosh computer?

Simon and ‘that wild person’ (actually, he’s not that wild) will be staying on the book for the foreseeable future, so relax. As for the questions…1. Yes 2. Yes. 3. No 4. !!! Yes, you guessed it, it’s the dreaded return of TRUNIP (the Totally Unhelpful Replies, News and Information Program).

I am writing to your book in an attempt to win a No-Prize. It concerns Shockwave’s undersea headquarters. In issue #71 Mindwipe questions Shockwave, asking him where he has been and how he got this ship. Well I have an answer to that question. Remember way back in issue #1, when Megatron and his army attacked the ark after it had cleared a path for Cybertron through the asteriod field? We know they left Shockwave abord thir craft and that later he went down to Earth (where he met the Dinobots). It is logical that Shockwave would have hidden the Decepticon spacecraft, remote landing it somewhere it would go unnoticed-a contingency plan against possible disasters. Where better to hide it than on the ocean floor? So does this qualify for a No-Prise? Oh yeah, stick with Andy for the art, you’ve got a winner!

What would you like first, the good news or the bad news? The good? Okay. Well, the good news is that your explanation is pretty much spot on. The bad news is that this doesn’t qualify you for a No-Prize. The essence of the No-Prize is that you find a mistake or continuity glitch and then eplain it away. All you have done here is read our writer’s mind (what there is of it!) Still, well done anyway!

Dear Autobots: enought, ENOUGH! You miserable, self-righteous, self-preserving mecho-bunglers make me sick! I can barely forgive all the pressures you’ve put on Optimus Prime due to your lack of intelligence. If you had half a brain chip between you, Prime’s job could be made a lot easier. He might be able to devote more time to planning strategy if he didn’t have to spend so much time telling you to eat up your energon and come in out of the rain. You have the greatest entity in the Universe as your leader and you shun him! For millions of years he’s led the fight against the Decepticons without any sort of reprieve, always protecting life, always protecting you! He’s suffered more than the rest of the Autobot race combined! So what do you do when he tries to save you all from Unicron? You turn on him like Starscream might! you have no faith in your leader and no loyalty. You’re worse than the Decepticons; at least they’re not hypocrites! You discust me! I’m so sorry that Optimus is duty bound to take care of you-he deserves much better!

Erm…it’s just a comic, you know! Nurse, the screens!

I just finished reading TRANSFORMERS #70. At the end you said Ratchet could be repaired but this would mean repairing Megatron too. I don’t care! You can’t kill Ratchet, not after all he’s been through! In issue #5 he was the last Autobot left active and had to battle Megatron himself. In issue #26 he had to go up again the Mechanic and then in issue #56 he had to single-handedly try to reactive all the scrapped Autobots, before being captured by Megatron and forced to battle him again! And then you bring him back-fused together with Megatron! Why am I starting to get the feeling you don’t like Ratchet?

RE: Issue #69 – 71 – AAAAAAAAAA! These have been the best issues to date. Awesome, stupendous (let me check my thesaurus), Nonpareil, prodigious and splendid! I absolutely adored these issues. Simon, you truly can write a story, and if Andy ‘Wild’ Wildman is not the permanent artist I’ll … Drink some of that nucleon stuff! And I thought Jose and Geoff were talented! Issue #69 finally showed us what Autobot leisure time is like, and there was some terrific character development to boot! In issue #70 (third frame of page 2) there was a touching scene where the mutilated Ratchet touches Prime’s mouth and his reflection is seen in Prime’s eyes. The extremely detailed backgrounds and characters are like nothing I’ve ever seen before. Recheck page 8, second frame- this is art! Issue #71 was great as well. I thought the flashback in the beginning was very effective. Galvatron is as crazed as ever and Shockwave’s renegade Decepticons are great!

Nonpareil? Yep, you definitely win this issue’s Hyperbole Aware with that. Nice one!

I think that Nel Yomtov deserves a medal of some sort. He’s been on the book since day one! Geez, Doesn’t this guy have a home to go to?

Why yes, Nel has a perfectly lovely cardboard box on the sidewalk outside the Marvel offices. Hey, we treat our freelancers well at Marvel!