The Matrix Quest continues with issue 64 entitled, ‘Deadly Obsession’. I feel like Simon Furman is really on his A game with these Transformer stories. The way he is introducing all these new characters (toys), in a story line that has been making sense is nothing short of Amazing. Now, before we delve into this whale of an issue, let us review the cover. 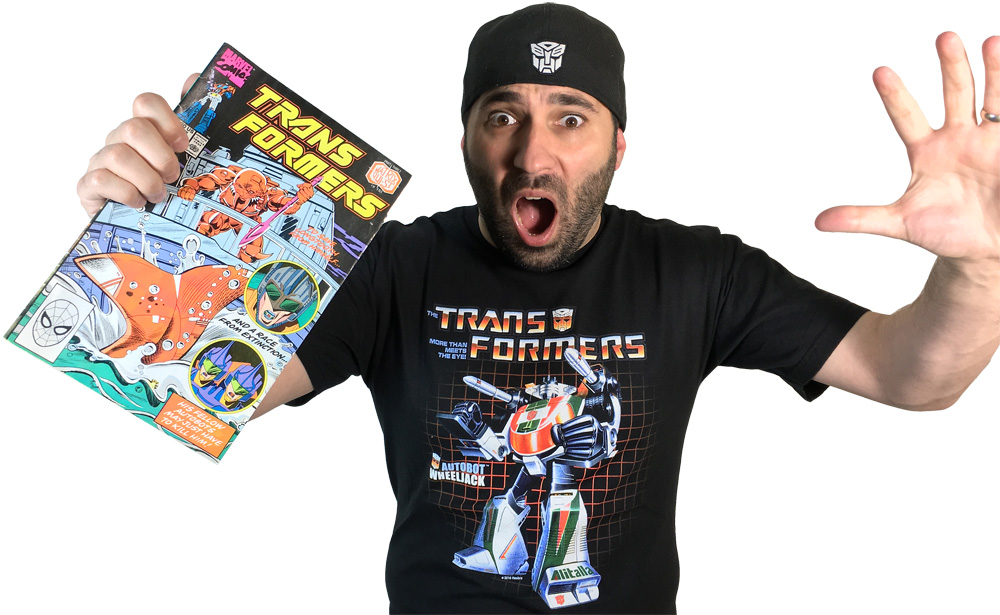 Wonderful Transformers T-Shirts Can Be Found At 80sTees.com!

The logo at the top of the book has again replaced the faction symbol with the Matrix Quest logo. Longtooth stands, spear at the ready, on a ship. Beneath him the tale of a large mechanical whale flaps and splashes. There are two circles along the right side of the cover with other Autobot pretenders inside with a look of shock on their faces. Also written along the right side of the over, ” to save Longtooth from himself… and a race from extinction… his fellow Autobots may just have to kill him!”. The whole cover is rather busy, but given Longtooth and the whale tail are done in a solid reddish orange they pop out from the cover help you focus on at least something. 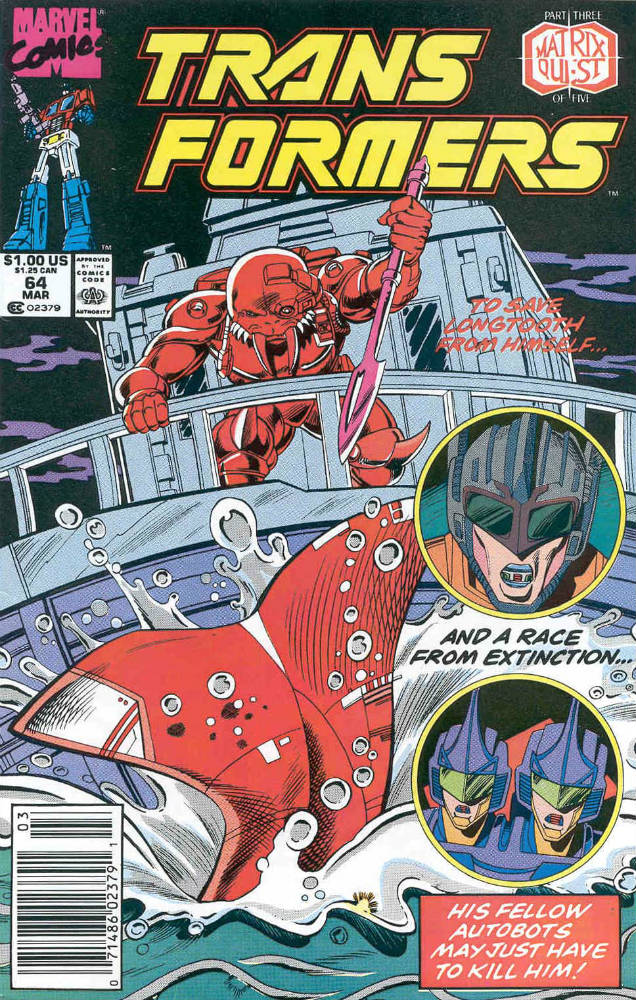 Our whale of a tale takes splash on the mercury seas of Pequod with Autobot Longtooth zeroing in on a whale like monster that in this story is known has Klud. Longtooth takes aim at the sea beast while his fellow Autobot Pretenders, Pincher and Doubleheader, race to stop him from another ship.

At this point the story skips back two weeks to when this group of Autobots started their part of the Matrix Quest. From the Ark to the harbor town of Gottlieb on Pequad. The Klud were thought to have been extinct, but one has turned up and he hasn’t been friendly to other sea way travelers. The Autobots go to check it out thinking that the creature’s sudden return could be due to the power of the Matrix. 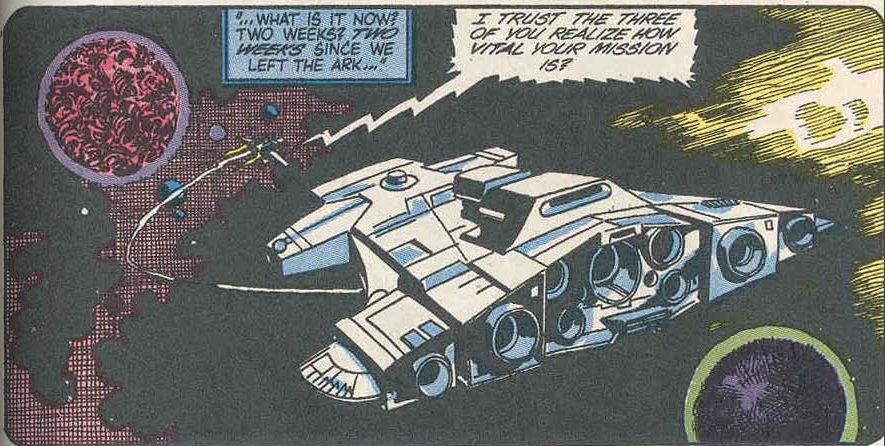 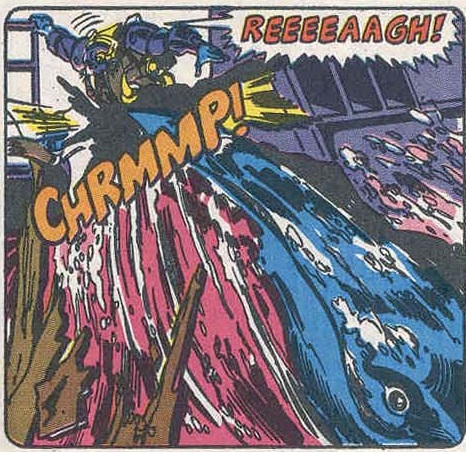 Needlenose and Spinster go after the Autobots while Thunderwing tries to make contact with the Klud. Here we see Thunderwing use some mental powers we’ve never seen before as he tries to contact the Kluds mind with his very own. With this ability he is able to see that the Klud swallowed something with the Matrix energy. This allowed the Klud to be energized. 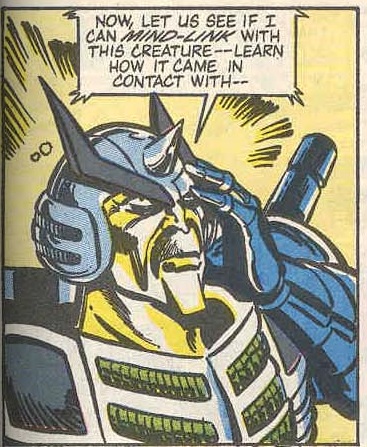 While the Autobots and the Decepticons are fighting one another, Longtooth is ready to pull the trigger on the sea beast. At that moment, Pincher comes up and tries to persuade Longtooth not to do it. He tries to help Longtooth remember he is an Autobot and they have a code of conduct they follow. 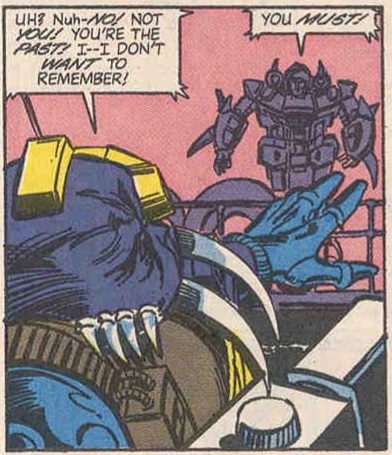 Thunderwing calls of the attack after his mind-link, believing the Matrix should be on VsQs. 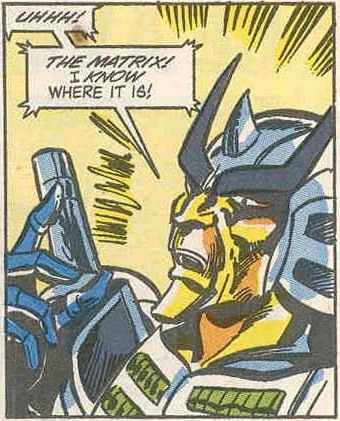 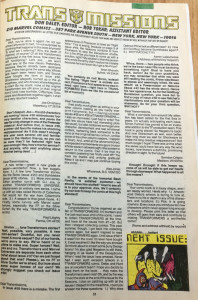 Well, you’ve done it again! I’m not surprised anymore! in fact, I’m not surprised by anything that happens in this book anymore! To what am I referring? Why, the death of Ratchet, of course! Of all the Transformers introduced in the first issue, how may are still functioning? Let’s see…we won’t count any of the new classic Pretenders, because they’ve already been destroyed once. Prime has gone the same way, Wheeljack hasn’t been heard from, and Soundwave bought the farm in issue #50. Shockwave allegedly burned up in the atmosphere, and who knows where Megatron is now!! By my count, none of the original Transformers are still alive (in their original form)! Until I see Ironhide, Cliffjumper, Sideswipe and Bluestreak together again, I shall be a very reluctant reader!

Don’t despair, Joe-the old characters are coming! Issue #69 reintroduces four very familiar characters, and paves the way for a big change in one of the Pretender classics! And before that, in issue #68, another old favorite makes his shocking reappearance! As if this wasn’t enough, this yer sees several old and familiar faces in the Hasrbo line-up, so you can be sure they’ll be featured right here soon enough! Hey, how’s that for service?! And anyway, who said anything about Ratchet being dead…!

A new writer-great! A new grade of paper-wonderful! Now, a few suggestions: 1.) A few lone Transformer stories, like the Skids (issue #20) and Bumblebee (issue #16 stories. 2.) More mini-series. Either another run-in with G.I. Joe, or another TRANSFORMERS UNIVERSE. Maybe even an entirely new series. I came up with an idea called worlds of Cybertron, that would tell the war from Cybertron’s side. 3.) A sequel to the great movie. 4.) Finally, some run-ins with Marvel super heroes, especially the FF or the Silver Surfer! By the way, TRANSFORMERS is terrific!

Hmmm… lone Transformers stories? Yeah, possible, very possible. A new mini-series? Doubtful, but you never know! A movie sequel? Out of our hands, we’re sorry to say. We’ve heard of no plans to make one. Super heroes? Well, yes and no. Transformers and Marvel Universes are separate from each other (what about issue 3#? can we just forget about that one? Please.), so no FF or Silver Surfer we’re afraid. But how about some super heroes of our own? We strongly suggest you check out issue #68!

In issue #59 there is a mistake, The first appearance of Piranacon is listed as “Right here.: This is wrong, because on page 3 of issue #49, the Seacons combine to form Piranacon to stop the Decepticon shuttle. For a No-Prize you have to come up with a solution, right? My solution is that the person who wrote the entry didn’t realize his mistake because he is a moron! Do I get a No-Prize?

You certainly do not! Moron, indeed! The listing “Right here” is entirely correct. Piranacon’s first appearance was in deed right here-right here in TRANSFORMERS! Even we like the occasional bit of humor(!).

I had pretty much given up writing to you letter column (seeing as you hardly ever print anymore), but-having just read issues #58 and #59 of TRANSFORMERS-I was so impressed I just had to write! The past few issues have had interesting plots (as usual), but also contained some genuine character development and real emotional content, harkening back somewhat to the tone of the orginal series (which, unlike some of the other clumn readers, I happen to love!) And, amid all the aforementioned, unexpected improvements you guys (in your infinite wisdom allowed (sigh) Starscream to return to the cmoic. Can it be that my constant pestering has finally paid off? You have my thanks and undying gratitude! Keep it up and I may just continue buying this comic…

In the words of the immortal Basil Fawity, “A satisfied customer-we should have him stuffed!” Glad to see all is to your approval, Alex. We’ll certainly try our best to keep the comic at this high standard!

Congratulations! You’ve regained an old fan of TRANSFORMERS! I’m fourteen and I’ve just read issue #59 of the comic. I used to collect TRANSFORMERS all the time and have all the issues from *1-30. But then I stopped collecting comics. This past summer, thought, I got back into collecting comics again, but wasn’t inspired to read TRANSFORMERS gain. Until issue #59! If it wasn’t for the cover i’d never have bought it. It was excellent! I like the way you showed Grimlock about to smash some puny Decepticons! I’m also glad Megatron is still there, hanging in as leader of the Decepticons. When I read the issue I was amazed. Never had I seen such excellent artwork in a TRANSFORMERS comic. Delbo and hunt are an excellent team! I hope you decide to keep them on the book… they make the Transformers seem real! Oh, and by the way, I loved the stats at the end of the issue for the Seacons. I plan on catching up with all the issues I missed! In the meantime, could you answer me these questions: 1.) Why does Optimus Prime look so different now? 2.) How did Goldbug become Bumblee again? 3.) WHY RATCHET?!!

Whoa, there-two people who think we’re the Beez-neez! We must be doing something right! Glad to have you back, Arron! As for your questions, you may remember that while you where still reading hte comic, Prime was blow to pieces and seemingly killed. He was rebuilt as a Powermaster on Nebulos (issue #42 has the whole story). Hence his new appearance. As for the Goldbug/Bumblebee question, you have but to find a copy of issue #58 to see Ratchet’s machinations and your question will be answer. As for your third question, WHY NOT?

What a complete turn-around! My attention has been seized for the first time in years. I’m actually anticipating each issue. Simon Furman has proved to be an invaluable addition to the TF production team. This book is going places! So Megatron’s back! And now Starscream as well, even better. How long must we wait for Shockwave to make his long overdue reappearance? Not much longer I hope! There was a time when the series could have led any way the wind blows, now there’s a definite, promising direction in sight. To the future!

Enough! Enough! If this keeps up, none of us will be able to get our heads though doorways! What happened to all the moans?

Your comic book is in lousy shape, and I am deeply worried. Here’s why: 1.) airwork: Jose Delbo’s artwork is boring to look at. There is no life or depth in any of his characters and locations. 2.) Plot: It is going nowhere. Every issue you introduce ten new characters which never appear long enough to develop. Please print this letter so that others will open their ears and contribute to making TRANSFORMERS a worthwhile comic!

(Name and address withheld by request)

Like I said at the top, Simon Furman, I feel, is on his A game. Working in all these Characters that Hasbro requires in a solid story arc. So far anyway. I tip my hat to the man.

Jose Delbo continues his art with this issue in some really well done drawings.

Something that is worth noting is that I feel that this issue was heavily influenced by Moby Dick. It works. The whole Moby Dick feel would be hard for anyone to miss.

For me it was a visually dark issue which I think helps convey Longtooth’s state of mind.

It was also a hard story for me to follow for whatever reason. It’s solid, but just required me to read it slower and spend a little more time with it.

I want to call bullshit on Thunderwing’s mental powers. If they are never used again, I think I win.

So what did everyone think of this issue? What do you guys think of the art?