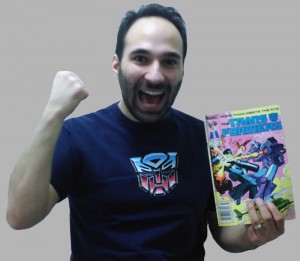 Transformers issue 6, entitled ‘The Worse of Two Evils!’, picks up from the last issue with Shockwave still in command of the Decepticons and with Optimus Prime’s still functioning head instructing Buster on how he can help.

The cover of issue 6 depicts Shockwave and Megatron in a heated battle in midair with Megatron sustaining a palpable hit from Shockwave’s arm Blaster. Smoke and clouds surround them as a green helicopter surveys the battle on the lower portion of the cover. The copter, I believe is from an off shower oil rig that Shockwave attacks in this issue.

Alone, Shockwave attacks a very high tech oil rig that belongs to G.B. Blackrock. An Industrialist with a lot of money. The oil rig has a wicked defense system with on board weapons and attack helicopters. But all these defenses prove ineffective against Shockwave who succeeds in taking over the oil rig. It is important to note that during the attack, the head I.T. or computer expert on the rig becomes severely injured during the attack. Her name is Josie Beller.

Back inside the Ark, the still functional head of Optimus Prime tells Buster to connect some wires from his forehead to buster’s own. This results in a type of electrical shock which knocks Buster unconscious. Buster remains unnoticed by the Decepticons as he comes around and returns to Ratchet and tells him what he discovered.

Shockwave announces that he has taken over the oil rig to the other Decepticons. This infuriates Megatron, who breaks free of a system that was preforming repairs to him, and attacks Shockwave. Using his fusion cannon, Megatron literally blasts Shockwave across the Oregon onto a high school. Shockwave is able to still defeat the weakend Megatron whose injuries where not completely healed. At the end of the battle Shockwave denies Megatron a warrior’s death stating that he is more valuable alive then dead. At least for now. 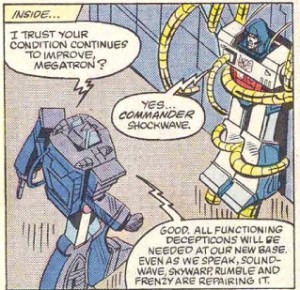 Shockwave returns to the Ark carrying a defeated Megatron. Shockwave uses Megatron as an example to the other Deceopticons of what they can expect if they challenge his command.

The comic ends with Ratchet and Buster

No Letters in this issue.