With issue 53 we find out if the Autobot Pretenders are eaten up by the Mecannaibals. It should be interesting. But we can’t find out what happens before we check out the cover art. 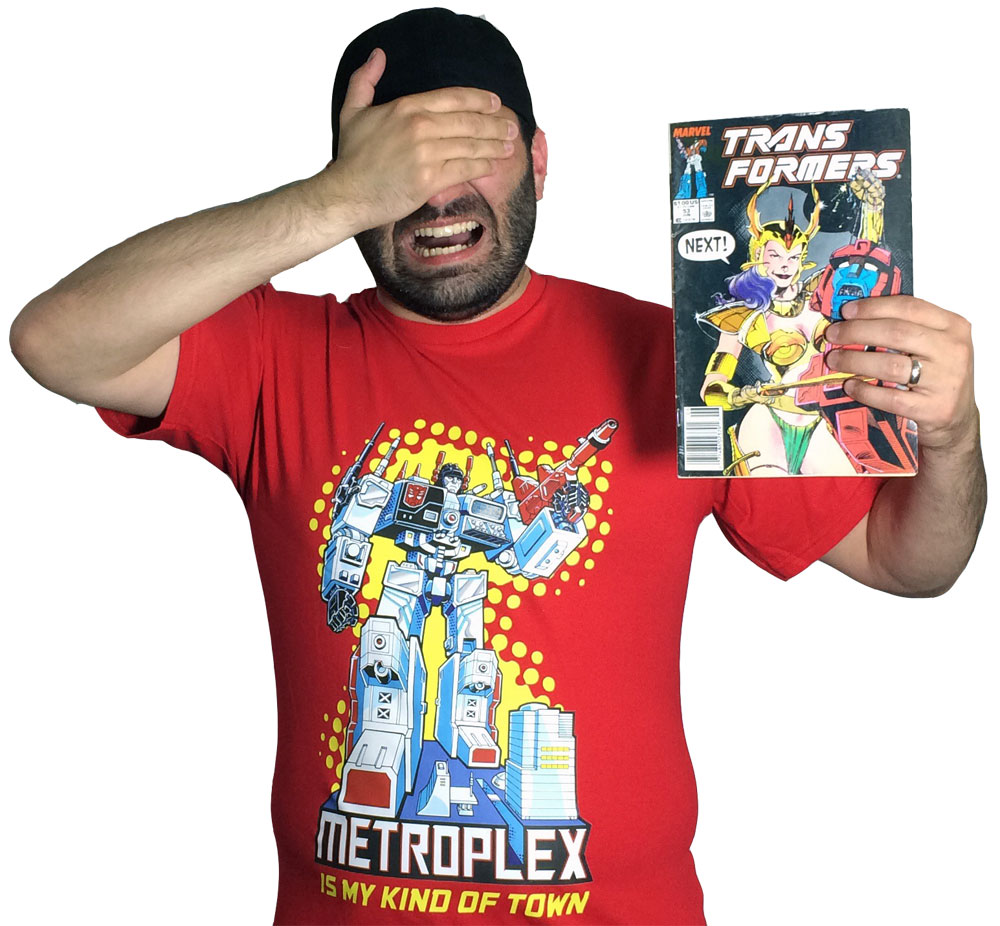 Have a city sized adventure with this Metroplex T-Shirt from 80sTees.com

I want to flip out over this cover because it was drawn up by JIM LEE! This is some of his early work and the cover is so nice and detailed. It’s only one of two covers Jim Lee did for Transformers that I’m currently aware of. We have a rendering of a heavily armored, large, bikini wearing, Amazonian like women holding the head of Cloudburst’s up by some wires. The sword she is holding in her other hand is implying she shopped his head off.  Jim really draws humans well, and at a time where it seemed other artists where upset that they had to draw robots, he does a fantastic job of not only giving the Transformers hard lines but giving him expression and life. The Amazonian says “Next!” while she looks directly at the reader. 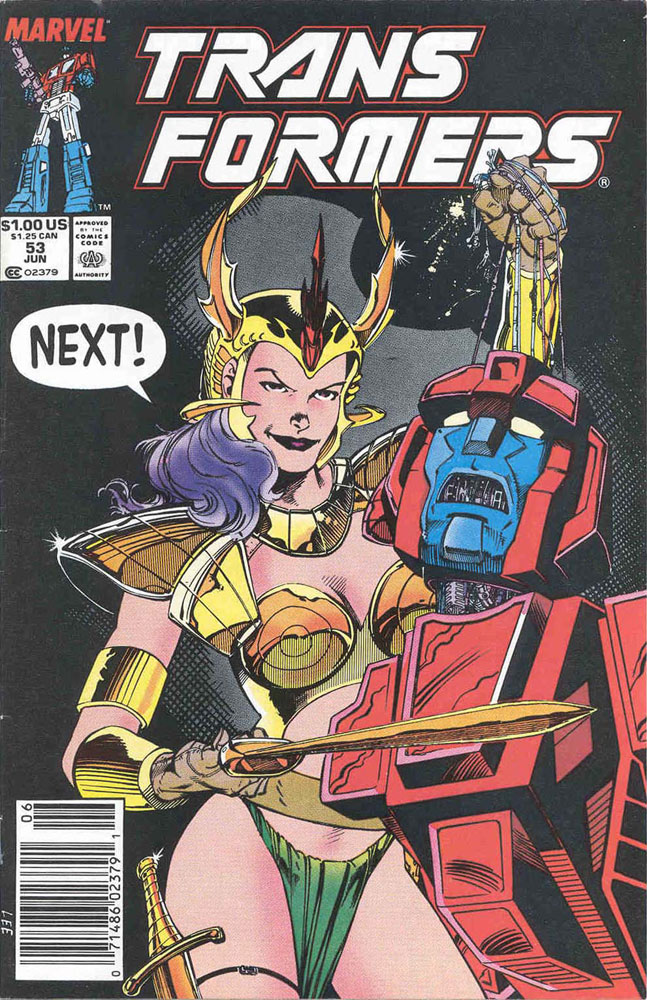 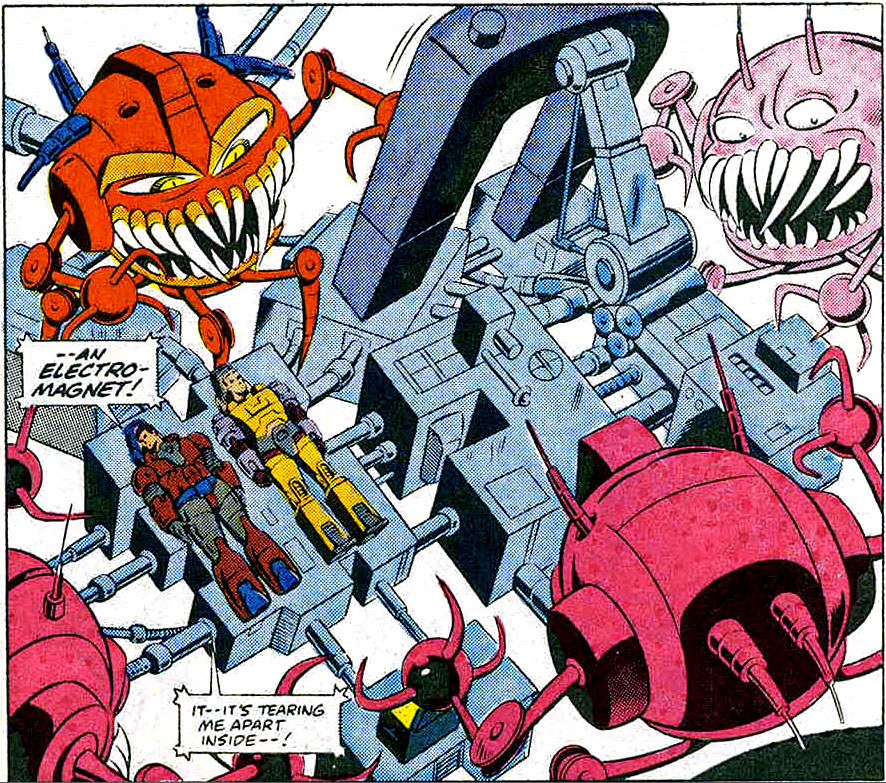 So, The Autobots embark to Femax, A whole world led by brave, Amazonian like women warriors. On this planet the men are treated as feeble and weak. The leader on Femax is known as ‘First One’ and starts off by challenging Clouburst to a series of physical tests designed to prove that he is true fighter. 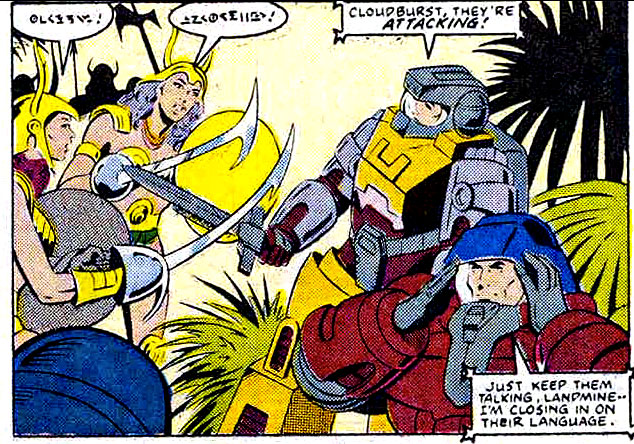 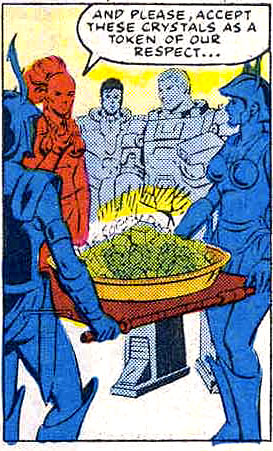 As the Autobots attempt to leave the planet Femax, they are stopped by Darkwing and Dreadwind, but Sky Lynx shows up and makes short work of the Decepticons. He then informs the Pretenders that they have been working with binary bonded Decepticons. Information they start to think would be of interest to the Mecannibals. 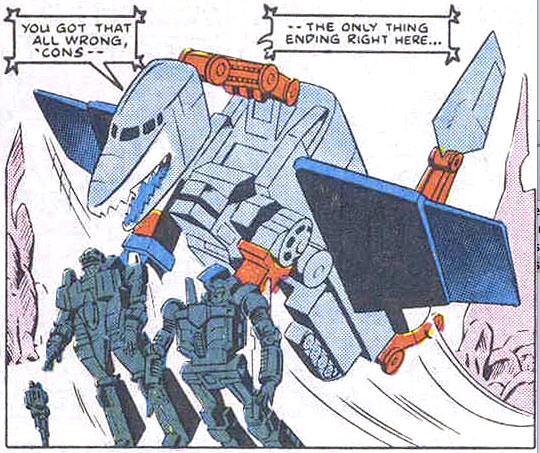 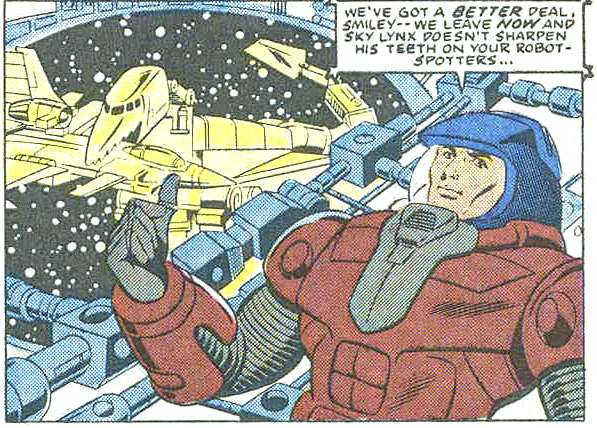 The issue closes out with the Autobot Pretenders heading back to the ark with out their microchips. Hi-Test and Throttle and the Powermasters are chased after by the Mecannibals.

The cover does a good job of hitting at the story inside, but it is a huge disconnect from the first part of this story in the last issue. I can imagine kids buying this comic wanting to know what happens next thinking, “WTF?” when seeing this cover.

The first page of 53, I thought did a great job of telling people who didn’t read the last issue what was going on. I rather liked it and think it’s my favorite part of this issue. Something about how it was written and how they didn’t feel the need to do a huge flashback scene like they tend to do. 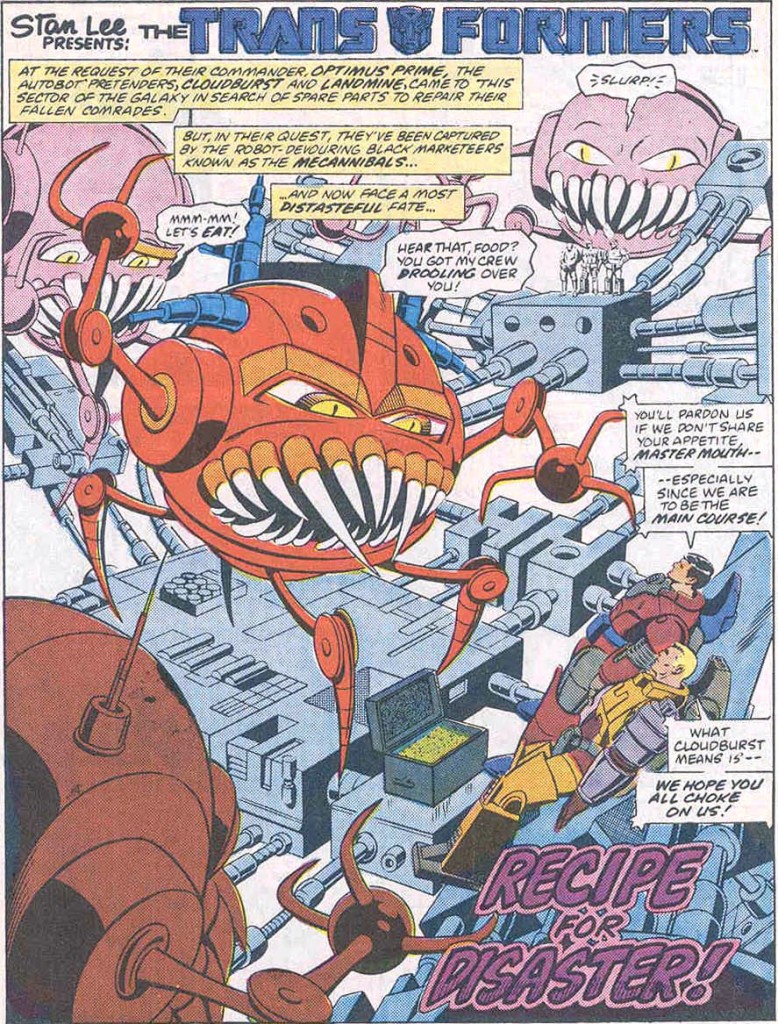 I found myself confused by who’s side Berko is really on at the start of the story. The way Hi-Test and Throttle implied that Berko helped them by having the Autobots reveal themselves to him was very miss leading by the time I got to the end of the story. Thought, that might be a good thing because that little mystery of who’s side is Berko really on, kept me reading excitedly till the end to find out.

One last thing I want to touch on is Gender. It seems like Gender has been a hot button in the Transformers world recently. Which is to bad because event thought I’m not a fan of IDW Publishing’s current on going Transformers series, I can see gender arguments affecting story telling in a possible negative way. I think comic book readers really want a good story first and for most. With that said, I discovered on page 18 of this issue, Cloudburst explains to First One, “Where I come from there are no men, no women… no mates!” It’s the first time I have noticed that the issue was brought up and addressed. Though, I do recall questions about gender being asked in the TransMissions letter section by fans.

So, issue 53 is read and absorbed. What did everyone think? What where your takeaways from this issue? Let me know, I want to hear from you. 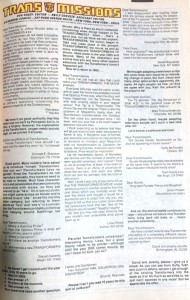 Dear Trans-Missions:
In response to Jeffrey Bryce’s letter in TRANSFORMERS #43:
The Transformers do not need to breathe like humans do. But they often still need oxygen to burn the fuels that they consume. Energon, the Transformers’ basic fule, does not need oxygen since it is already a pure energy form and doesn’t need to burn to release energy.
A Transformer can also operate using Earth’s carbon=based petroleum fuels if the necessary internal adjustments are made. Nearly all of the Transformers here on Earth have been adapted to accept both Energon and Earth fuels. But when a robot is functioning on a petro-fuel, he must have atmospheric oxygen readily available. Obviously, this would inhibit any robots operation in space or underwater; therefore, he must be using Energon to function in either of these environments.
I hope that I have answered at least some of Jeffrey’s questions concerning the technical aspects of the Transformers.
Perceptor
The Ark

We have it on good authority that this letter was not sent by Perceptor, but ism in fact, a forgery. However, the explanation of the Transformers’ oxygen needs sounds legit, so we printed it anyway.

Editors and Writers of Transformers,
Female Transformers? How absurd! I always had the idea that they were “Its,” not sexual beings.
Emmett E. Brandon
Dickinson, TX

Good point. Many readers have asked us to introduced “female” Transformers. How can we? Transformers have no gender! Since the Transformers do not reproduce sexually, they have no need to be male or female. Most have characteristics and personalities that are commonly associated with males. So they are referred to as “He’s.” On a rare occasion, one might come across as female and is referred to as a “she.” Arce fits into this latter category, but referring to themselves as “He’s” and “she’s” is a convention the Transformers probably picked up from hanging around Earthlings too long.

1. He doesn’t get created until the year 2005. Only 16 years to go.
2. Wait till 2005
3. See answer #1
4. No plans at the moment.
5. See answer #4
You questions raise another question, Steve: Why is there so much confusion concerning when things happen in the TRANSFORMERS? Hmm… that’s a good one, but we think we can explain: TRANSFORMERS, the comic, began in 1984 and takes place in the present. TRANSFORMERS, the movie, as well as many subsequent TRANSFORMERS TV shows, takes place in the year 2005 and beyond. Many of the characters and events that you and many other readers associate with the Transformers haven’t happened, yet!
Now let’s return to 1989…

Dear Transmissions:
I think i’ve just had an idea that could solve your TRANSFORMERS: THE MOVIE problem.
Everyone who has read the comic series and or seen the movie has probably noticed that Optimus Prime was, when the story (will have) happened, not the Optimus Prime who has recently reborn in your regular series! That Op is a Powermaster. The movie Op was the original. There is also the problem of Megatron’s being alive, and Bumblee’s transformation into Goldbug. The last issue you addressed once. I believe, and you said that a lot could happen between now and then.
I think expecting us to believe that they will all just revert to their older, less powerful forms is silly. If Megatron was re-formed, you would be restricted to no improvements or revisions or changes upon Megatron, and no transformers to Galvatron because, being that two reversions were hard to believe, three would be impossible!
Let me momentarily digress, all Marvelites are familiar with the concept of parallel and semi-parallel universes, am i correct? That is, we all accept that, at least, in the realm of comics, there is an infinity of universes-al-most-like-our-own, and each one differs from our own by, perhaps, one decision or one action.
Well, I think it was silly of you not to tell us that THE TRANSFORMERS MOVIE limited series occurred in another universe that the one about which you normally write! You saw the movie and thought it would be a wonderful story to adapt. but silly you forgot to tell us that your comic series does not necessarily have the fat. See all the confusion you’ve caused? Naught, naughty!
So now you may rest easy, knowing that your readers now understand what you’ve been up to.
Lissa Shock
Vienna WV

Parallel Transformers universes? Interesting theory, Lissa, but a good theory needs to be proven-although until the year 2005comes around we can’t know for sure, can we?

Please! Can’t you wait 16 years for this sort of outburst?

Dear Transmissions,
I was disappointed after reading issue #43, the primary reason being the adaptation of the TV episode “The Big Broadcast of 2006.” I buy the comic because it has different stories and they are much better than most of the TV shows. Keep the comic in the present and out of the future to avoid creating conflicts in the stories.
Karl Raguse
Farmington Hills, MI

Dear Guys,
How could you!?! you actually took a story from the Transformers cartoon show and used it for the comic book!
David Noguerole

We thought adopting a television script into comic book form would be an interesting change of pace, but Karl, David and many other letter-writers apparently disagree. All right, people, we hear ya! And we agree with you, Karl: the present is the place to be!

Dear Ralph an Don,
The TV episode “The Big Broadcast of 2006 A.D.” is the greatest issue of the TRANSFORMERS books history!

On the other hand, maybe adapting television scripts isn’t such a bad idea after all!
Let’s end on a controversial note:

Dear Transmissions,
You are introducing too many new characters at the same time. It seems to me there’s a new character introduced every issue!
Tuan Giang Lieu
Van Nuys, CA

And so, the eternal battle continues to rage – should we introduce new Transformers, bring back old ones, or…here’s another possibility…

Dear Transmissions,
We have created several new Transformer characters of a completely different nature, and we would like to know how to proceed in submitting them.
David and Jeremy Jacobs
Birmingham, AL

David and Jeremy, please – give us a break! As you can see from Duffy, Tuan and Justin’s letters, we don’t get enough of the existing Transformers into the book as it is! As much as we’d like to, we just can’t squeeze in any more! But we appreciate the offer.