With issue 49 we continue the Underbase Saga. Can Buster finally get saved? What plans does Ratbat and Decepticons have? Is there enough time for the Autobots to rally together and stop them? Will find out soon enough, but first lets check out this cover art. 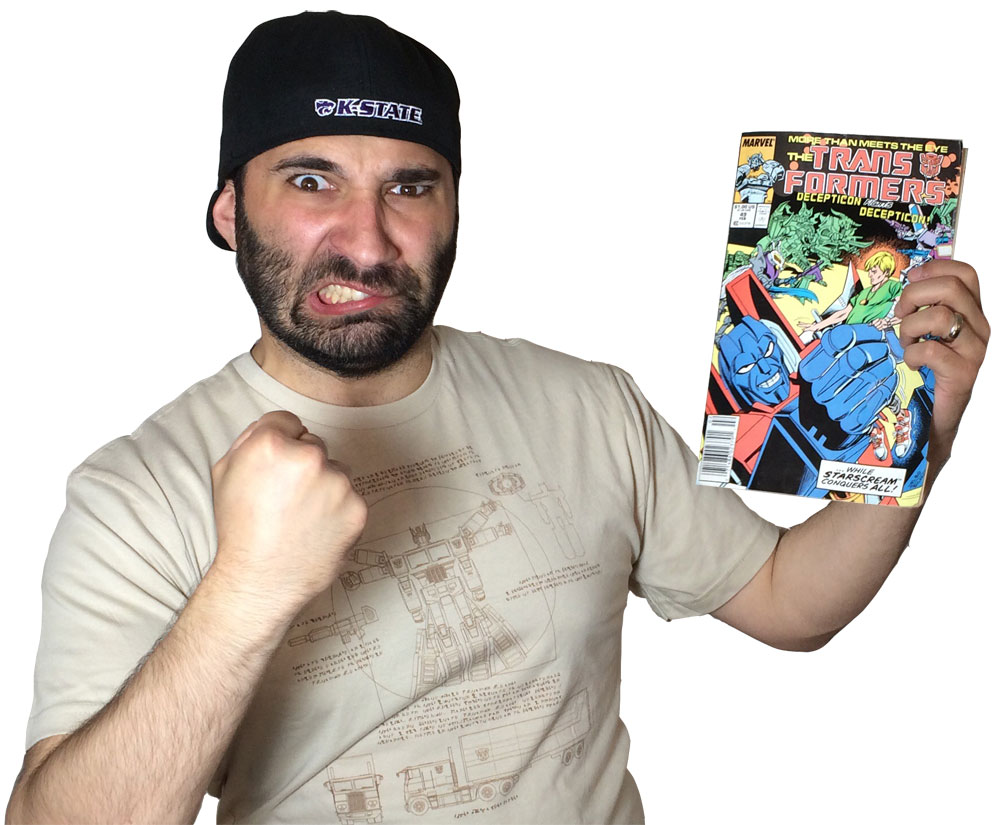 Pick up this great Transformers T-Shirt from 80sTees.com

Transformers issue 49 is sporting a darkly rendered cover. Front and center is Starscream holding Buster Witwicky in his fist as he struggles to get free. “Decepticon fights Decepticon!” is written underneath the Transformers logo with, “…While Starscream Conquers All!” is written on the bottom of the cover. In the background you see several Decepticons about to clash, but all of that is lost because your eyes gravitate to how oddly Starscreams face is rendered. As if his normal robotic looking head was removed and replaced with something more human like which allows the artist to really show off facial expressions. But I find the end result to be far to distracting. On the plus side this cover does a good job of eluding to what you will find within the pages of the comic book. 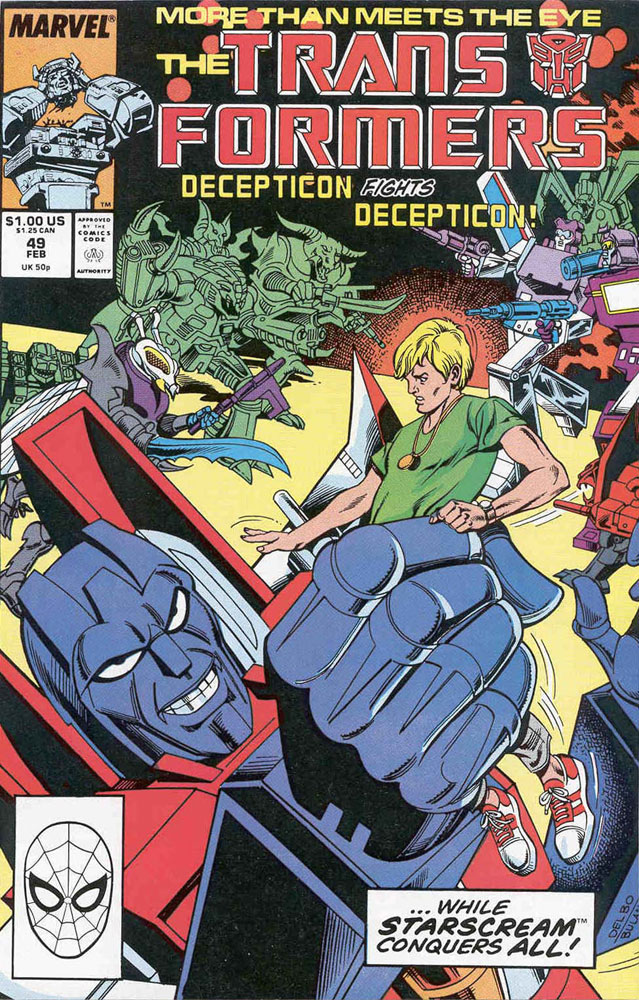 The Decepticons have relocated their base to the Arctic as a result of the Club Con failure. A starship arriving at the Decepticon base is escorted by Starscream who tells the Decepticons to allow the spacecraft to land avoiding a near battle. On board Scorponok and several other Headmasters Deceptocons exit the craft. They are cranky from almost being destroyed by fellow Decepticons. 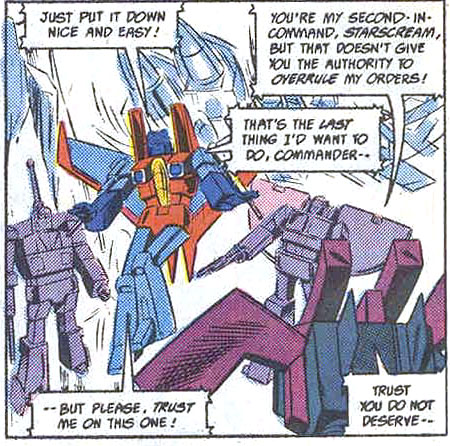 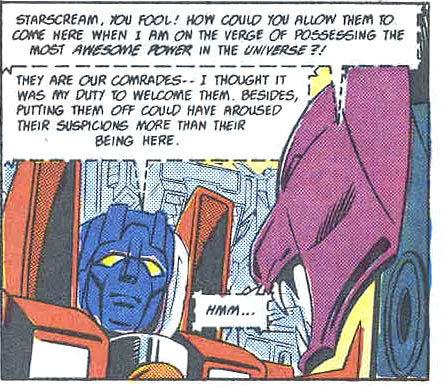 Things don’t get easier when Scorponok reveals that he and his troops are part human. Ratbat is not please. 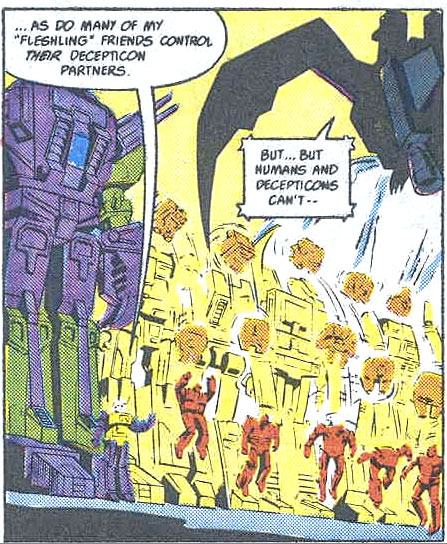 Optimus Prime, Blaster, Spike and Fortress Maximus are searching for the Decepticon island base and Buster in the Caribbean to no avail. 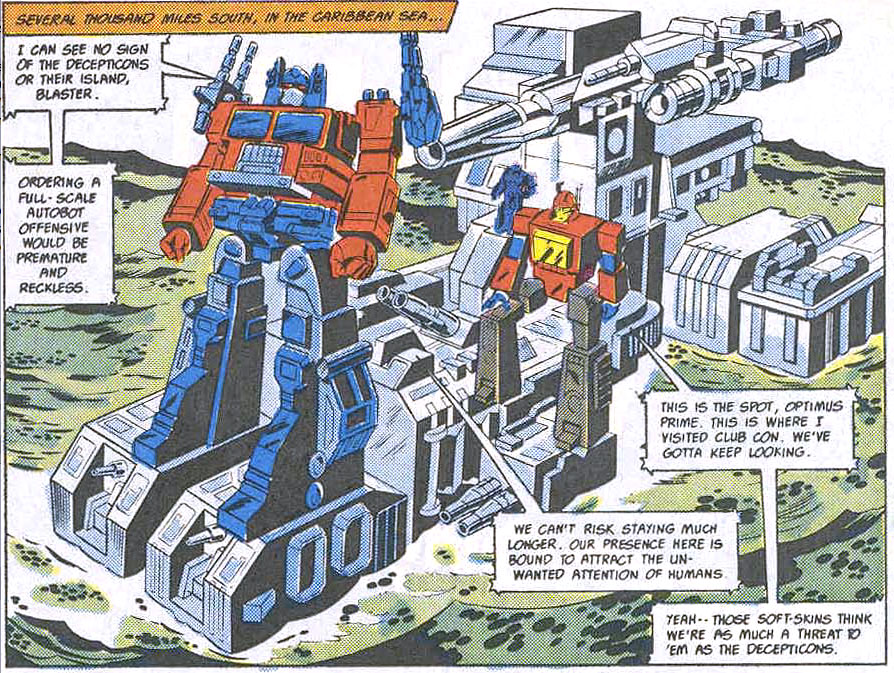 Back in the Arctic, the Headmasters are getting a tour of the Decepticon facility by Starscream. They stop to check in on Buster Witwicky and Starscream flat out tells him that he is up for immediate termination. Buster freaks out and says that he is only being killed because of what he overheard about the Underbase. Starscream tries to silence him, but Scorponok has already heard enough. Scorponok goes to Ratbat and confronts him regarding the Underbase. Starscream, who can hold back his excitement, thanks Buster for helping him before taking him to the air in jet mode. 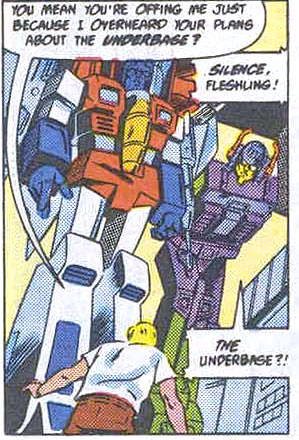 Scorponok and Ratbat argue over the Underbase before Scorponok leaves with his crew. Ratbat sends the Predacons after him and a battle breaks out. Scorponok and his Headmasters are soon joined by the rest of his bots from the starship. 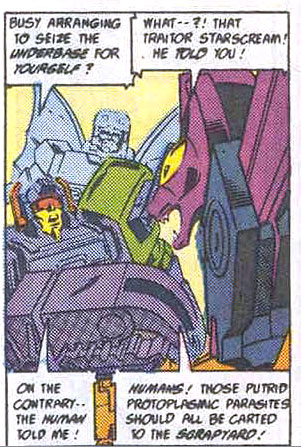 Starscream leaves Buster on a ice shelf. Before he is left alone, Starscream gives him a small communication beacon that will signal the Autobots to his location. But buster understands that in doing so would result in a huge battle between the two Decepticon factions and the Autobots. But, facing a the fact he will die from exposure, Buster signals the Autobots while Starscream flies into Scorponok’s vacant Starship. 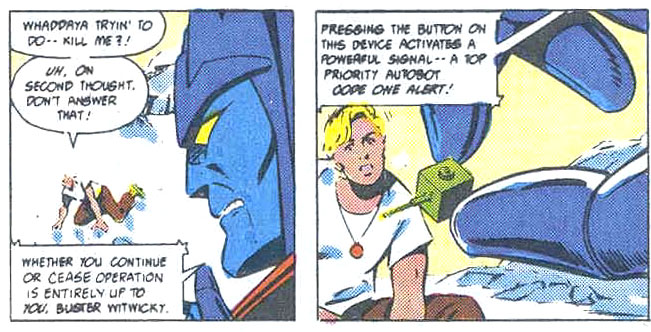 Just to get it out of the way, I found Starscreams face renderings to be very distracting the whole issue. Also, how much longer do we have to put up with this Powermaster Optimus Prime bull shit?

The issue is a pretty decent story with the loss of several Decepticon lives done so in such a way I don’t believe will see them coming back ever again. I know I can be wrong about this, but the mast destruction of so many Decepticons just felt like a way to get ride of characters they wont be making action figures of anymore.

In this issue we lost: Cutthroat, Horri-Bull, Skywarp, Rampage, Tantrum, Razorclaw, Bomb-Burst. There was a lot going on in this issue, but I am pretty sure that’s who we lost.