With Transformers issue 30 we finish off the Scraplets story line with a comic called “The Cure!” Do Blaster and the Triple Changers survive? Are Goldbug and Charlie able to find this supposed cure to rid the world of Scraplets? And are they able to do it within the ten hours that Ratbat from Cybertron has given them? We’re going to find out, but first lets check out this cover. 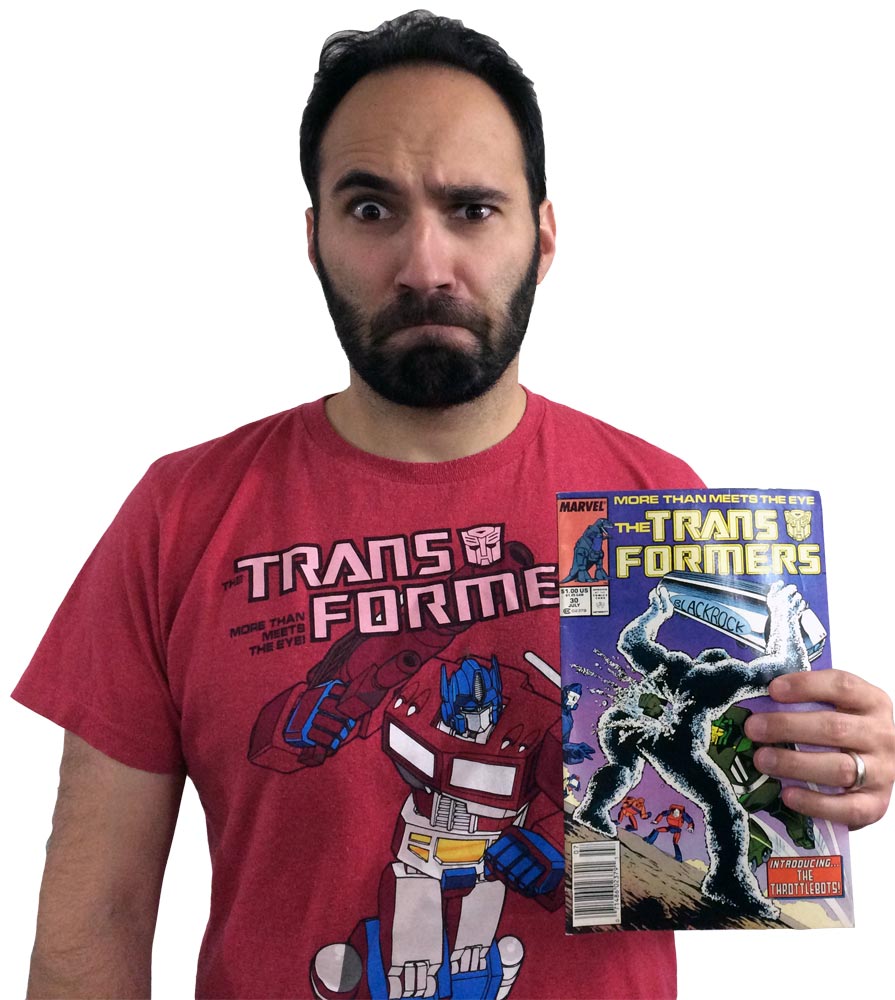 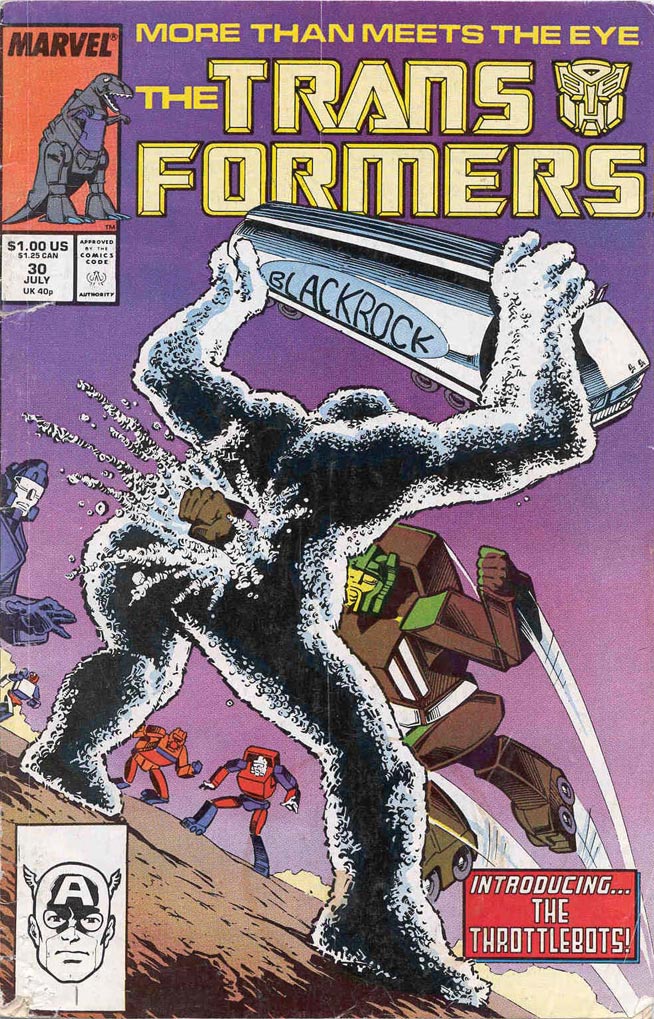 Issue 30 starts off on Cybertron with the capturing of the Throttlebots during a fuel raid they planed. Ratbat tells the Autobots that they will be sent to Earth to destroy all the Scraplet infected Transformers by using canisters filled with acid. Ratbat gives the Autobots 10 hours to complete this mission. If they are unsuccessful, Ratbat will destroy earth. 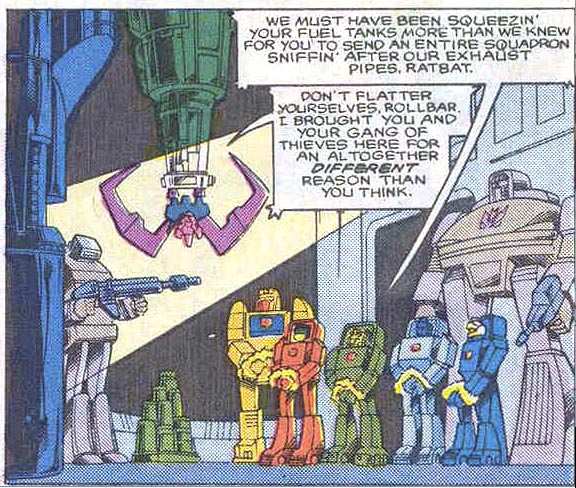 When the Throttlebots arrive on Earth they discover Goldbug’s tracks leading away from the crater. Rollbar and Wideload take an acid canister and follow the tracks.

Next we cut to Goldbug. Charlie Fong has pushed him to a gas station where the attendant of the place offers Charlie some water. As Charlie drinks, some of the water spills onto Goldbug. The water kills the Scraplets it lands on. So this supposed mythical cure for the Scraplets turns out to be water. Before Charlie can get the hose from the side of the gas station and wash off Goldbug, Rollbar and Wideload arrive with the goal of killing Goldbug and his Scraplet infestation with acid. Once Charlie is able to demonstrate that water is the cure for the Scraplet infestation the Throttlebots back down.

With Goldbug cured, but looking a little worse for ware, he contacts G.B. Blackrock and arranges to have a large amount of water transported to the crate to cure all of the infected Transformers. When Goldbug preps the water to cure Blaster and the Triple Changers, Blaster tells Goldbug to kill him rather than save the Decepticons. Because of this Goldbug hesitates and the Scraplets take this moment to merge into a huge Monster. The Scraplet monster proves more than a match for the weaponless Throttlebots, so Goldbug chooses to cure Blaster and the Throttlebots who provide enough firepower to right against the Scraplet monster.

Astrotrain attaches a stroboscopic opticon to Blackrock’s forehead thinking that he is an important human to have for the Decepticons. The stroboscopic opticon flashes a light pattern in front of Blackrock’s eyes, then falls away unseen by anyone else. The Decepticons escape, carrying the cargo from the freighter which brought the Scraplets to Earth.

I actually thought this was a decent issue. Yeah, the whole thing about water being the mythical cure for Scraplets had me kind of thinking that it was corny, but the more I thought about it the more I can accept it. Transformers have not had any interest in water at all since they crash landed on Earth. Add the fact that it seems that those who heard of the this mythical cure where not sure what it could have been helps make this plot point much more acceptable.

Blaster seems like such a solid character to me. He does not seem like his Cartoon counter part. At least not yet. But he has a back story and it does affect his personality. I am very interested to see where the writers go with this Autobot. 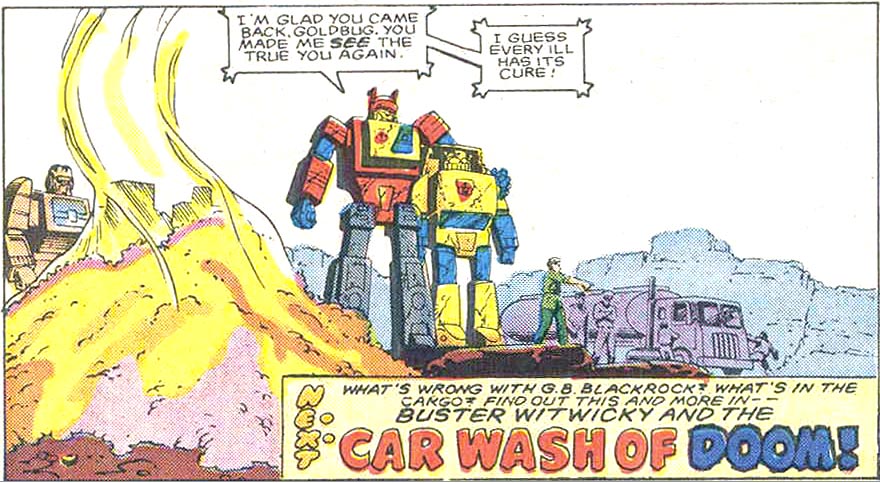 I still stick by my thoughts on my last review. This two issue story line does remind me a lot of something like the Monsters-of-the-week from the X-Files.