In issue 29 we pick up where we last saw Goldbug and Blaster taking off on their own to combat the Decepticon threat. Will the two Autobots be able an effective force against the Decepticons or does something more sinister lay in waiting for them? Will find out soon, but first lets check out this cover art. 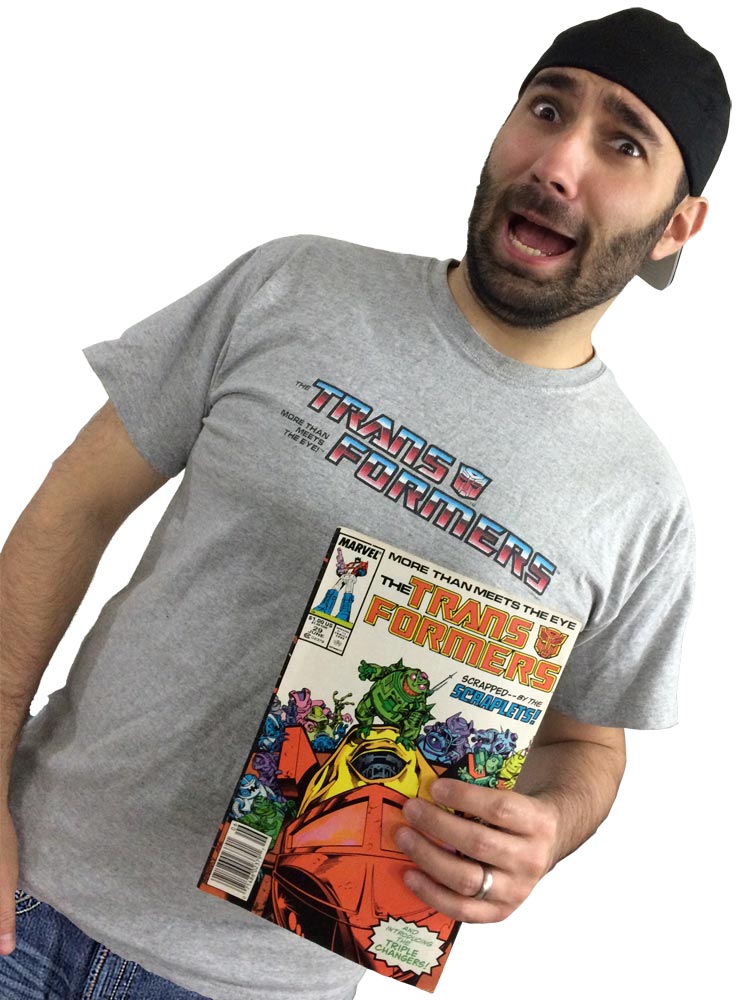 Transformers issue 29 sports a white cover with the head of Blaster rolled backwards towards the reader. Mouth open and clearly in distress. He is cover by a bunch of tiny robots and in the upper right side of the comic reads, “SCRAPPED — By The SCRAPLETS!” In the lower right of the comic, in a bubble reads, “AND INTRODUCING THE TRIPLE CHANGERS!” 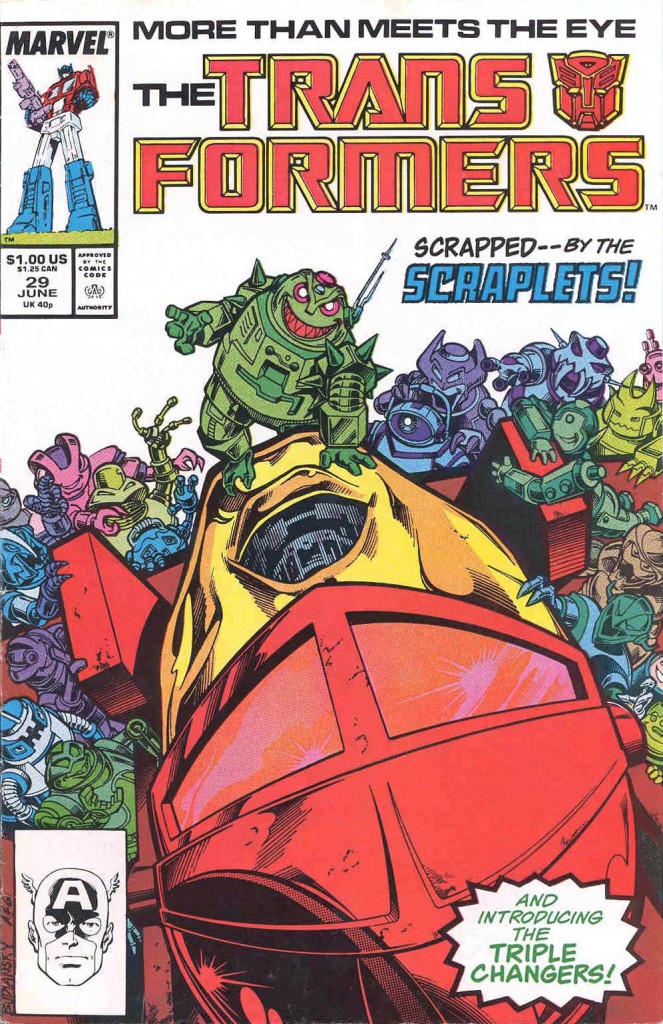 Goldbug and Blaster go out on their own because they feel they can do a better job by themselves rather than under Grimlock’s rule. The two of them seek out and find G.B. Blackrock, in hopes that he may have some intel to lead them to some recent Decepticon activity. They are informed by Mr. Blackrock that a meteor crash down in Northern Arizona. The two Autobots head out to investigate the site. 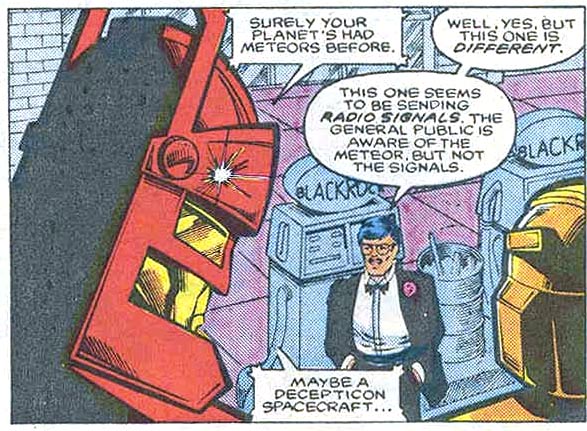 It is soon learned that the meteor was in actuality a space freighter sent by the Decepticons from Cybertron. It was part of a secret mission to steal Earth’s energy. However, the freighter’s pilot did not make contact with Cybertron upon arrival as was originally planned. This results in Ratbat using dwindling energy supplies to send the Triple Changers Astrotrain, Octane, and Blitzwing to earth to investigate what happened. 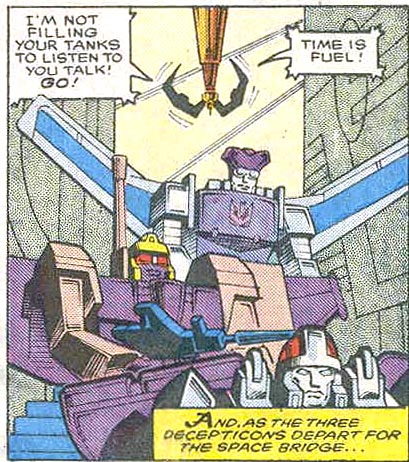 Upon landing on Earth, the Triple Changers scare away human scientists who were planning on studying what they think is a meteor crash. The Decepticons find the freighter, but because of their impulsiveness only learned why the ship crashed after it was to late. The pilot had become infected with Scraplets during his trip to Earth. Scraplets are a group of super little Transformer robots who can change into screws, nuts and bolts, but attach themselves to mechanical lifeforms, replicate quickly and cause great amounts of damage to the robot they have infected. 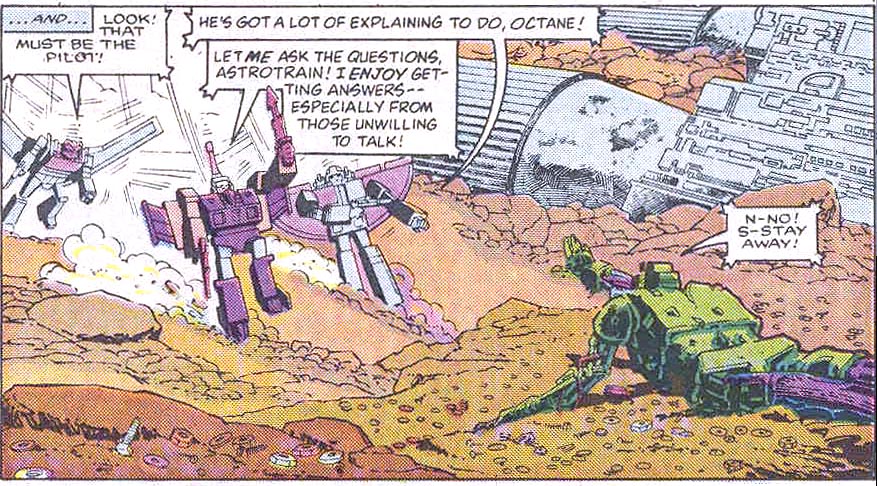 Charlie Fong, one of the scientists from the site, is contacted by Goldbug and Blaster. The group work out a plan to get to the crater so they can learn what is going on at the site. Upon arrival they are quickly attacked by the Decepticons. This results in Goldbug and Fong becoming separated from Blaster. Blaster himself becomes infected by the Scraplets as Goldbug and Fong retreat 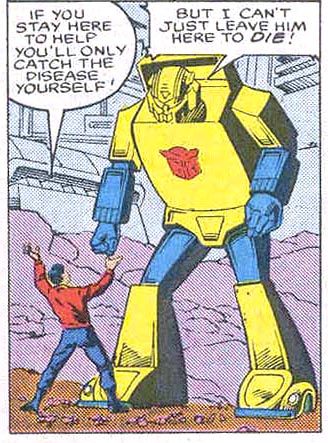 Blaster feels betrayed that Goldbug left and expresses himself verbally. Going so far as to promise revenge. Fong tries to talk logic with Goldbug, telling him that if they don’t find a cure for the Scraplets infestation, Blaster is a goner anyway. Goldbug reluctantly agrees with him and they leave the creator entirely. Feeling guilty, Goldbug pauses to look back and becomes infected by Scraplets himself. Now, Goldbug has no choice but to go with Fong and hope that a cure can be found. 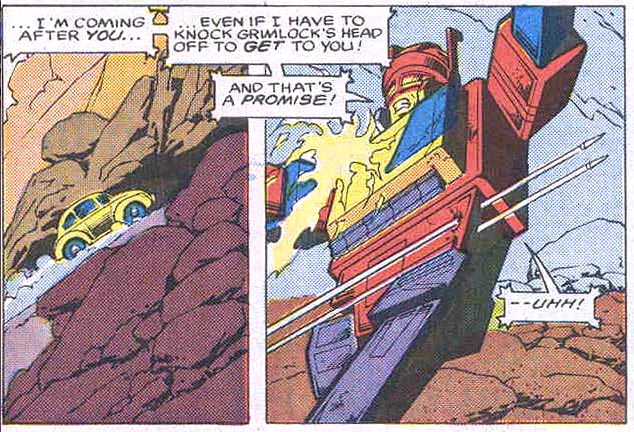 The part of this comic book that sticks out to me is towards the end where Blaster is feeling betrayed that Goldbug had left him. At first glance this could be look at as forced drama that the writers are trying to create. It feels like misplaced emotions to go from kicking Decepticon scum, to white-hot anger. I guess my personal reaction to such a thing would not be anger but more of why and curiosity as to Goldbug’s leaving rather than feeling betrayal. 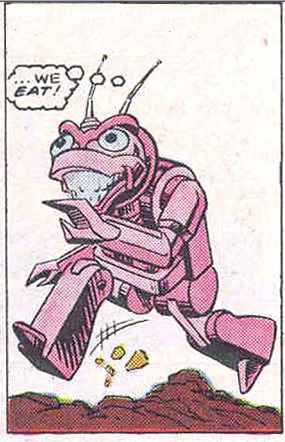 When I think about it more. When I think of Blaster, the character, I remember the fact that not to long ago he himself was on Cybertron and was in a situation where he could not save his friend Scrounge. Maybe that experience messed with him. Maybe the fact that he was unable to save his friend on Cybertron from dying right in front of him has left him feeling vulnerable. As if he is afraid the same thing might happen to him. In which case this issue would make him feel like that. I wonder if they are going to do that deep with Blaster as a character. I guess I will find out in the next issue.

The rest of the comic was decent. Nothing super amazing. The Scraplets feel like a Monster-of-the-week kind of thing. Which there is nothing wrong with. X-Files first 5 seasons where really good and strong when they stuck to the Monster-of-the-week story writing. 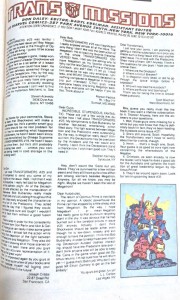 Dear Marvel,
TRANSFORMERS #25 was terrific! I thnk that it’s the best issue yet! Boy, Megatron really was scared at the thought of Optimus Prime still living. I guess I’d be scared if I were in that situation.
But, now that Meggie is gone, I keep wondering how good of a leader Shockwave will be. I figure he’ll be a lot better of a leader than Starscream ever could have been. He would have definitely screamed things up for all of the Decepticons. Hey, by the way, where is good ole Starscream anyway?
Anyway, you guys really have a great comic book here. I’m anxiously awaiting your next issue because I can’t wait to find out who the mysterious Mechanic is. see you later!
Steven Acevedo
Bronx, NY 10466

Hey, thanks for your comments, Steve. We hope that Shockwave will make a good leader too. He’s a pretty smart guy so there should be no real problem for ‘im. If you’re wondering what happened to Starscream, he hasn’t been seen since he was demolished by Omega Supreme in TRANSFORMERS #19. He hasn’t been seen since then, but he’s still probably not doing too well… unless you consider being held in cold storage in the Ark doing well!

Dear Don,
I just read TRANSFORMERS #25 and felt compelled to send you some of my thoughts on the issue. Well, I felt that it was very enjoyable. I really felt bad for Megatron and his pathetic plight. All of the Decepticons were affected by the manipulation of Shockwave. Bob Budiansky really made him look cold and calculation throughout this issue. I also really enjoyed the characterizations of all of the Predacons. They acted exactly the way that I figured they would. By, those guys sure are tough! I wouldn’t want to face them without a good fusion cannon!
Praise is also in order for the consistently fine artwork from Don Perlin and Akin $ Garvey. Those guys can really make some great action scenes. I almost felt the actions while reading the depiction of the fight between the Predacons and Megatron. They also did a great job in drawing all of those scenes on Key West. I’ve been there and you guys made a very accurate representation of it. Keep up the great work!
Well, I’m impressed again by you guys at Marvel. I enjoy quite a few of your books and I don’t foresee myself not buying your comics at any time in the future!
Joseph Cribbs
San Francisco, CA

Dear Bob,
TRANSFORMERS #25 was magnificent! I really enjoyed almost all of the issue. the only thing I didn’t like was the destruction of Megatron. He is (was) my favorite character in the whole TRANSFORMERS UNIVERSE! Now, I bet you are asking why i’d have Megatron as my favorite character. Why not the late Optimus Prime or the brave Grimlock, you ask? Well, I’ll tell ya. I liked him because he was very emotional, ruthless, and MEAN! Shockwave’s deception is nothing compared to Megatron in his prime (no pun intended)! C’mon guys, make everyone happy and bring Megatron back. I’m sure everyone will be happy if you do this. Think about it!
Marson Fedrick
Sumrall, MS

Dear Guys,
INCREDIBLE, STUPENDOUS, FANTASTIC. Those are just a few words that describe how I felt about TRANSFORMERS #25. My compliments to Bob Budiansky for another fast-paced, entertaining, action filled story,. the fight scenes between Megatron and the Predacons were outstanding. By the way, is Megatron really dead? without him, the Decepticons may be overtaken by the Autobots and the war would end. Frankly, I don’t think the Decepticons stand a chance now. I wish them good luck. They’ll need it!
Stephen Kennedy
Syracuse, NY

Hey don’t count the ‘Cons out yet, Steve. They’ve survived for a few million years and they still have quite a few different strong warriors besides Megatron. Anyway, for all we know, you may be right. Maybe we haven’t seen the last of Megatron!

Dear Autodudes,
The return of Optimus Prime is inevitable in my opionion. a robotic powerhouse like Prime can’t be stopped by a little cheap shot from Megatron. By the way, I hope Megabum… I… er.. mean Megaton has really gone to that aluminum recycling palnt in the sky. It was obvious that he had burned out a few cerebral circuits in issue #25 anyway. Actually, I don’t think Shockwave should be leader either even though he is low-down, sneaky and evil enought to have the position. I think that Bob Budiansky in order to keep those awe-inspiring Deceptions/Autobot clashes interesting, should have the Predacons take over. I don’t think anyone else will be able to keep the ‘Cons in the game when good old Optimus returns. I’m not sure how he will return yet-I guess that’s Bob’s job! Why don’t you guys tell Ethan Zachary to get on the ball already!
You guys are great, luv ya!
L.L. Carlow
Las Vegas, NV

Dear Transformers,
I just love your comic. I am planning on getting a lifetime subscription to it once you creat e such a thing! Issue #25 was another great issue. I’m in love with the Predacons. Show more of them, OK? Anyway, I have a few questions for you guys. I hope you cna answer them:
1. Where are the Dinobots?
2. Where is Circuit Breaker?
3. Is Megatron really dead, or did he go through the space bridge before it exploded?
4. Who will now lead the Autobots?
5. Where are Buster and Sparkplug?
Thank you for taking the time to answer these questions.
Scott Boschert
West Bloomfield, MI

Boy, guess you really must like the book if you want a lifetime subscription to it. Thanks! Anyway, here are the answers to your questions:
1. Well, those guys were missing for a while but you now know that they’re definitely back! in fact, they’ve been leading the Autobots since issue #27!
2. She’s still around, Scott. Hopefully, the Transformers won’t have to worry about her for a while, thought.
3. Hmm… that’s a tough one, Scott. Your guess is as good as ours right now concerning the whereabouts of the Megster.
4. Grimlock, as seen already, is now the leader. Let’s hope he does a good job for the Autobots and upholds the tradition of great leadership begun by Optimus Prime!
5. They’ll be around again soon. Look for ’em in upcoming issue #31.