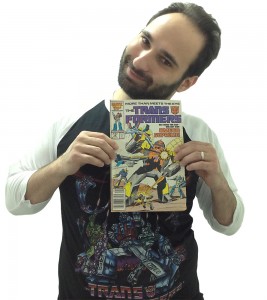 Transformers issue 19 introduces Omega Supreme to the Autobots team. A hunk or raw power and metal. As this is the issue after issue 18, the reader has questions about the stranded Autobots from Cybertron that came over on the space bridge. Will they be alright? Will they find Optimus Prime before Megatron finds them? Lets see if our questions are answered. But first, the cover!

Dominating the white cover of Transformers issue 19 is, Omega Supreme. His appearance reminds me of King Kong as he crushes, what looks like, Starscream in one hand and shoots at other Decepticons buzzing around him with his other hand. The Transformers logo at the top of the comic is in purple with the Autobot shield in orange. “YOU ASKED FOR HIM–YOU GOT HIM! OMEGA SUPREME!” is written in bold font at the top of the comic just above the Character himself. 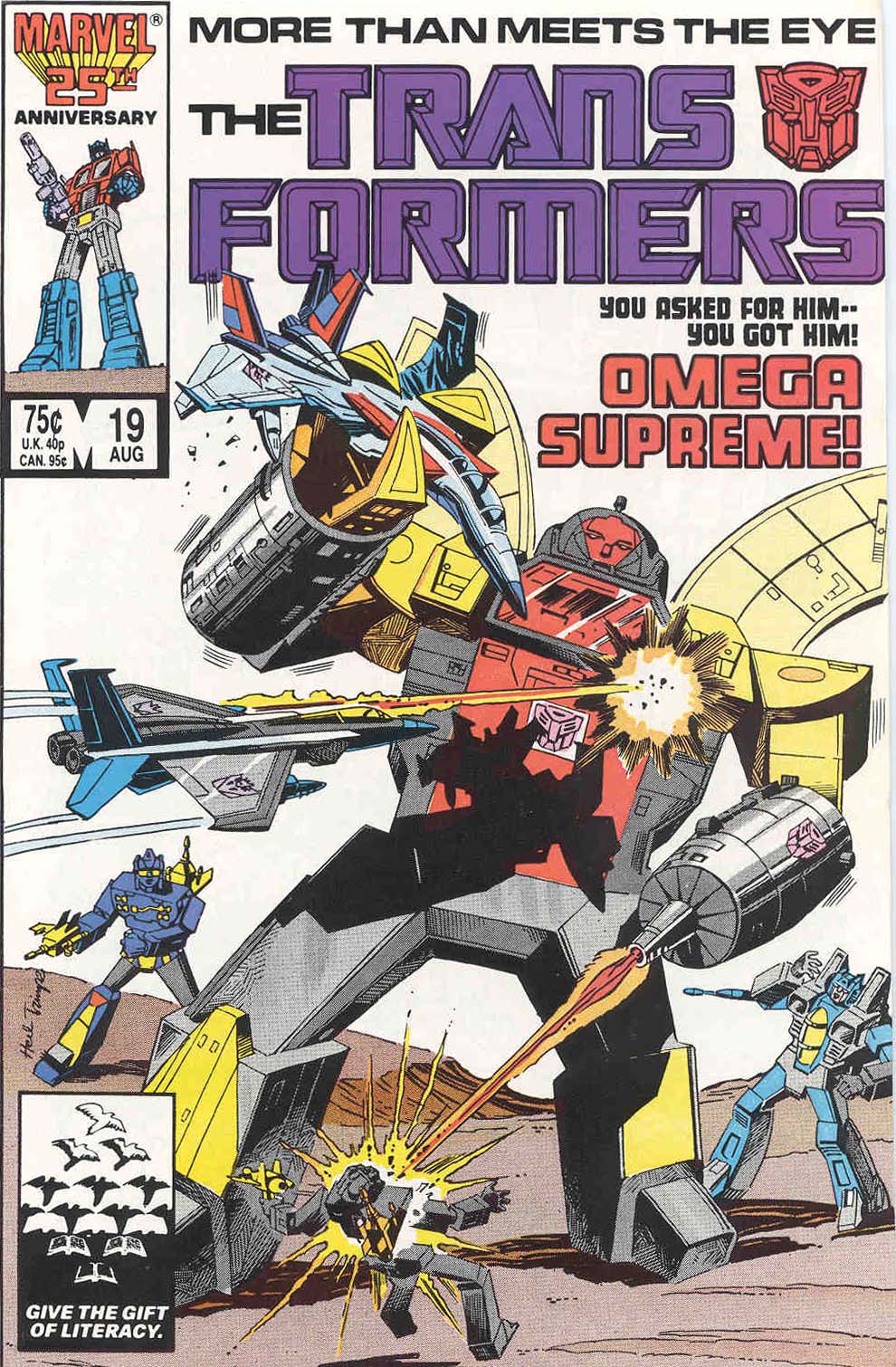 The issue kicks off with Optimus Oprime introducing the newest member to the Autobot team, Omega Supreme. Built to stand guard outside of base freeing up the rest of the Autobots to go after the Decepticons to try and steal the technology that is required to create combining robots like Devistator. So while nearly every Autobot goes to infiltrate the Decepticon base, Omega Supreme is left behind to guard the Ark. 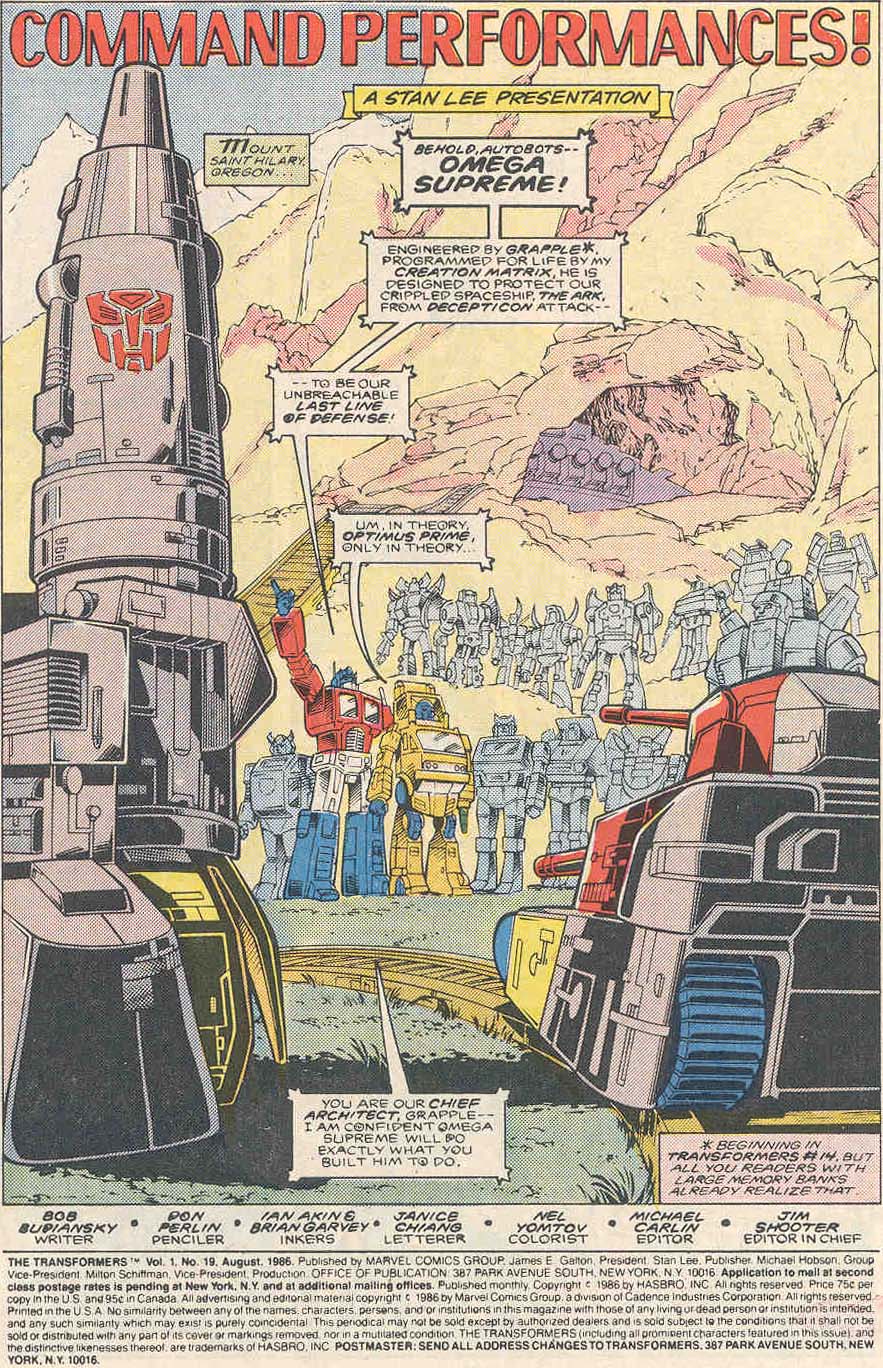 Megatron takes most of his forces to greet the Decepticons from Cybertron, who are expected to be arriving via the space bridge. Shockwave does not fully agree with this game plan and feels it is not the most logical course of action. 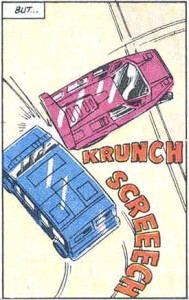 While Megatron and the other Decepticons are in route to the space bridge, Skids a minor altercation with a human driving an expensive Lamborghini. Optimus Prime, orders him to continue on. Shortly after the Autobots arrive at the Decepticon’s base and attack.

At the space bridge landing site, Megatron finds a group of Autobots who have crossed over on the space bridge instead of the Decepticons he was planning for. Before Megatron can mount an attack, he is radioed by Shockwave regarding the Autobot’s attack on their base. In an attempt to take full advantage of the situation, Megatron opts to attack the Ark. He and his forces are are met by, Omega Supreme. Only Megatron and Laserbeak escape. 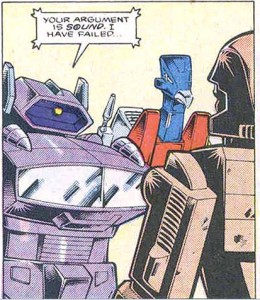 While the Decepticons are occupied at their base by the Autobot attack, Donny Finkleberk, the Robot-Master, escapes. Shockwave Sends Devastator to battle the Autobots, but the Autobots are still able to collect the information they where seeking and retreat. During the retreat, the Lamborghini drive cuts off Skids which allows ravage to blast Skids with one of his missiles.

Megatron returns back to base battered and beaten. Shockwave accuses him of gross incompetence. Megatron states that since shockwave sat and did nothing while a trap was unleashed on the Decepticons, clearing indicating an ulterior motivate. Shockwave concedes to Megatron’s logic.

The Autobots are thrilled about their victory. Optimus Prime can not celebrate as it appears Skids is lost. 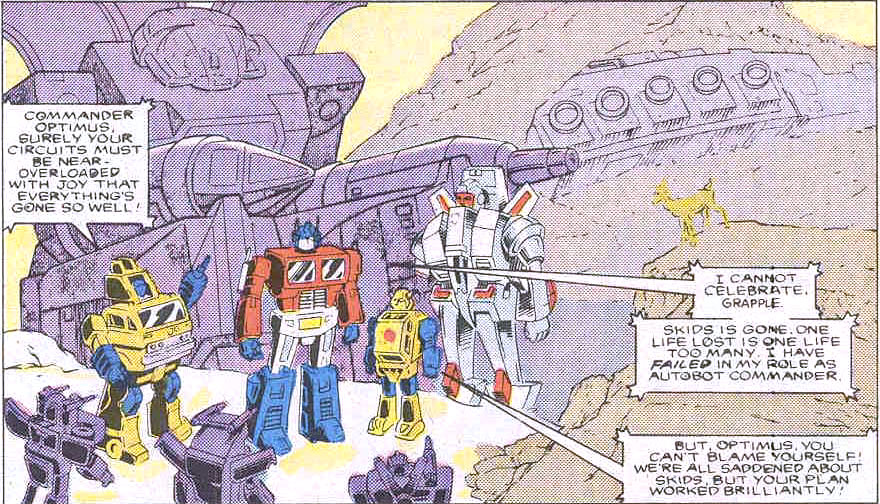 Omega Supreme sounds just as large as his titanic name. I can understand the Autobots’ building this herculean of Transformers to stand guard over their base. But, one has to wonder how they are able to build such a defender when they can’t repair several of their own wounded from an earlier battle in the comics. 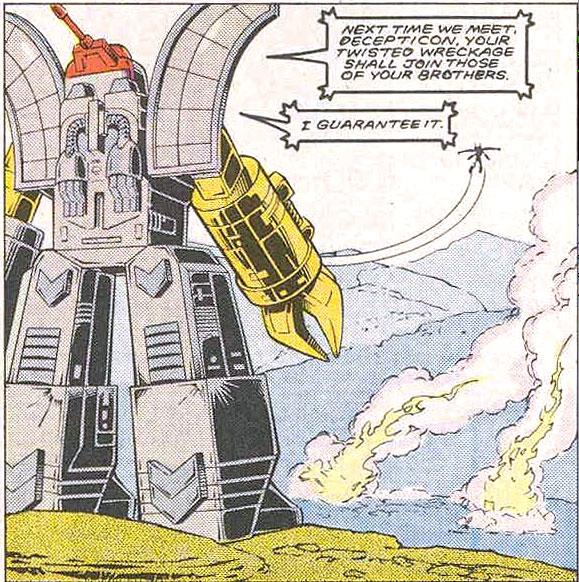 When the Autobots go forth to infiltrate the Decepticon’s base, the Dinobots don’t agree with Optimus Prime’s plan. They choose not to go on the mission. This whole little subplot felt forced and leaves one to question if the Dinotbots are even part of the Autobots anymore.

Overall, this was an action packed issue worth of it’s title, ‘Command Performances’. A lot of fun to read. The cover art is pretty good. It really makes me wish I owned, or did own, the Omega Supreme toy. One day maybe. 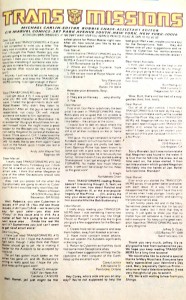 Dear Guys,
I’ve just read TRANSFORMERS #15 and I felt compelled to write you a letter. The story was incredible, and so was the art. At first, I thought this Robot Master guy was actually going to be able to control the Transformers. I liked your way also, I think that it would be interesting if someone was actually able to make Transformers do whatever he desired (that would be one enviable guy!)
Anyway. I just wanted to tell you to keep up the great work, and keep the TRANSFORMERS coming. I can’t get enough of them!
Ethan Shenkman
Cairo, GA

Dear TRANSFORMERS crew,
I just got issue #15. It was great! I loved what you did with Megatron and Soundwave. I hated the government’s stunt with Robot-Master. Why didn’t they listen to Blackrock? After all, the guy is normal and respectable, not crazy. Oh well, maybe someone will listen to him, sometime.
My favorite character is Soundwave. He is awesome! you guy should have him assert himself more. He might make a good leader for the Decepticons. Hey, maybe he can battle Megatron for control of the Decepticons. Think about it. O.K.? I also loved the Dinotobots appearance in TRANSFORMERS #8. I’d really like to see them again! Good luck in the future, guys. I hope you last a very long time.
Andy John Wayne Thill
Saginaw, MI

Dear Marvel,
I really liked TRANSFORMERS #15, but please take Donny Finkleburg out. I think that he is kind of dumb, and he acts like a smart alec. I think that either Megatron or one of the other Decepticons should take care of him…
Also, can you please tell me when the Transformers are going to return to Cybertron? I think it would be really neat if they did.
Rebecca Nelson
Beaverton, OR

Well, Rebecca, you saw Cybertron in issue #17 and 18. (You did see those issues, didn’t you?) And – we’re sorry to say, for your sake – you also saw “Finky” in this issue and in #18. As a matter of fact he’s going to be around next issue also. . . Kinda like real life isn’t it? Sometimes you just can’t seem to get rid of smart alecs!

Dear Guys,
I have just read TRANSFORMERS #15 and i liked it a lot. I hope the Autobots will fight back, thought. I also think that Robot Master should go to jail. He is making it harder for the Autobots to be accepted by mankind.
The art has gotten much better as the series has gone on, and Mr. Budiansky’s writing is really good too. I hope that you guys keep up the good work!
Romel O. Almazon
Cerdena CA

Well, Romel, jail just might be the safest place for Robot-Master right now. After all, how would you like being on Megatron’s bad side?

Dear Marvel,
I think that the TRANSFORMERS are the greatest. I just finished reading TRANSFORMERS #15 and I have a few questions.
1. Will Sunstreaker be O.K.?
2. Where are Omega Supreme, Tripple Changers, and the Aerialbots?
3. Will we see more of Robot-Master and Circuit Breaker?
Tony Warenzak
Dalton, PA

Dear Marvel,
First of all. Don Perlin is definitely the best artist I’ve seen in TRANSFORMERS. Also Bob’s plots are so good that I’m at odds to decide which version of TRANSFORMERS i like better – the cartoon or the comic.
I would love to see an issue where the Transformers return to Cybertron. There’s still a lot of their numbers on the old home planet.
Well guys, my single complaint is that the Autobots’ speech is much too formal. Listen, some of these guys are pretty laid back. Even Optimus Prime has been known to come out with a joke every now and then (although, to be honest, he is not usually too funny). I’d love it even if they started quoting Shakespeare’ I can’t get enough of TRANSFORMERS. no matter how much Marvel prints, it still won’t be enough for me. Keep up the great work!
S. Knight

Hmm. TRANSFORMERS reading Shakespeare? Interesting thought, S. Yeah, we can see it now, how about Ratchet and Juliet, Megatron III, or the ever-popular tragedy of MacPrime… (Oh, and by the way, your description of Optimus makes him sound a little like Bob Budiansky)

Dear Marvel,
I really enjoy reading your TRANSFORMERS book. I was wondering if some new Decepticons were on the way , like Dirge, Thrust, or Ramjet? I would also like to give you guys a few suggestions for the Decepticons:
1. Create more secret weapons and keep them hidden away from the Autobot scanners.
2. Have more constant sneak attacks. This will weaken the Autobots significantly in the long run.
3. Return to Cybertron so that they could find some more Decepticons allies.
I hope these suggestions will help the Decepticons in their conquest of the Earth. Keep up the excellent work.
Corey Lacroix
Pembroke, Ontario

Hey Corey, who’s side are you on anyway? You’re not supposed to help the bad guys! Wait a sec, maybe you’re a spy for the Decepticons. Yeah… they did follow one of your suggestions and return to Cybertron for reinforcements. Hmm, kind of makes you wonder, doesn’t it…

Dear Heroic Autobots,
I think your comics are the best in the universe. I have a question for you, thought. Are you guys going to have a special team up in an upcoming issue? If you do, I hope you consider having it with G.I. Joe. (Hint, hint, hint)
Burt Rodriguez
Ridgewood, NY

Wow, Burt that’s not too bad of a suggestion (hint, hint, hint!).

Dear Marvel,
Out of all of your comics, I think that TRANSFORMERS is the best. Buy the way I think I found a mistake worthy of the coveted Marvel No-Prize, Way back in TRANSFORMERS #8. Megatron fell into the snow. We then didn’t see him again until TRANSFORMERS #13, where he was found in the water! I hope you guys can explain yourselves out of this one, because i’m itching for a No-Prize.
Brendan Edmonds
Los Angeles, CA

Sorry Brendan, but it was not a mistake that Megatron as found in the water. It is true that he fell into the snow, but as time went on, the snow melted. It then ran into a stream which guided Megartron inevitable into the hands of Joe. Better luck next time, Brendan!

Dear Marvel,
Ever since you started the TRANSFORMERS series, it has gotten better and better with each issue. In a way, I’m kind of disappointed that they don’t have this kind of series when I was younger. I really get a kick out of reading your comic, and watching the television series, also.
I am twenty years old and in the Navy. Sometimes people tell me that I’, to old for comic books, but I think that they’re wrong. It just goes to show you that no matter how old someone is, there is still a kid in everyone. so keep up the good work and i hope that TRANSFORMERS lasts for a very long time.
Jeffrey D Goss
USS Barbey FF-1088
San Franscisco, CA

Thank you very much, Jeffrey. It’s really good to hear from someone like you. we hope you keep reading TRANSFORMERS for a long time to come!
We would also like to extend a special thanks to Mary Muschara. Everyone here really appreciated your Valentine’s Day card. Mary (especially Optimus Prime – who never had a Valentine before). It was very thoughtful of you to send it.
P.S. We’re still waiting to hear from you Shingo.