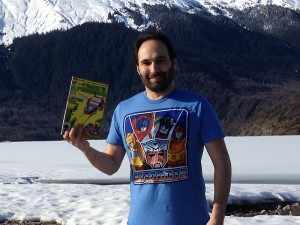 Transformers issue 11 takes place with what feel like a few days/weeks after issue 10. We learn more about how Buster Witwicky is dealing with and using the Creation Matrix that was transferred to him by Optimus Prime. We see Shockwave complete the creation of a new Decepticon called Jetfire. A fan favorite.

Many Transformers fans have commented upon the difference between Jetfire’s comic book/cartoon incarnation and Jetfire’s Hasbro action figure. The dissimilarity between the two manifestations of the same character is quite striking since the animated/comic book version of Jetfire’s robot AND vehicle modes (sporting a humanoid face and on angular and thick aircraft form) look nothing like what is captured in Hasbro’s three dimensional toy. 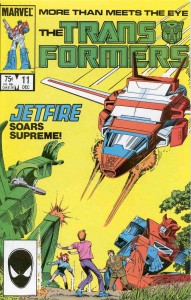 The reason for this divergence in style: Bandai Entertainment based Jetfire’s designs directly on the Japanese version of the Veritech Fighter aircraft featured in the first Robotech animated series, the The Macross saga, which was undergoing a surge of interest in Japan in the mid-80s. Since Bandai sold Harmony Gold the rights to the Veritech Fighter-and since this aircraft is liberally utilized throughout Harmony Gold’s Robotech anime-they outright refused Takara (Hasbro’s Japanese counterpart) toy distribution rights, and disallowed Hasbro the animation rights to the similarly-designed Jetfire because the Transformers cartoon was broadcast worldwide (impinging on the success of Robotech within the Japanese market). Therefore, Hasbro was allowed to distribute Jetfire’s toy to the U.S. and U.K. markets, but Takara was not permitted to issue the toy in Japan. Transformers #11 Editorial Note, IDW The Transformers Classics, Vol 1 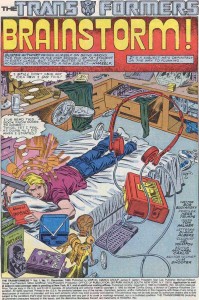 This mostly yellow cover predominantly features Jetfire swooping down and firing upon two Autobots as well as Jessie along with Buster and Sparkplug Witwicky. ‘JETFIRE SOARS SUPREAM!’ is displayed halfway down on the left side of the cover in blue and black writing. Bluestreak and Bumblebee appear to be the Autobots being fired upon by Jetfire. They are however miss colored on the cover. Bluestreak is colored to look like Hound and Bumblebee is colored to look like Gears.

Buster also continues to hide his new abilities from his father and friends. He still is helping his dad out with his auto repair business even though he hates doing it. Jessie finds Buster and wants to patch things up. The two go for a bike ride 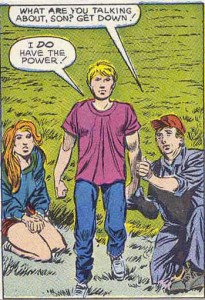 At the current Decepticon base that is Blackrock Aerospace Assembly Plant Number One, Shockeave grows impatient with Optimus Prime as he has been unable to give life to his latest creation, Jetfire. As a result Shockwave starts to believe that Optimus Prime no loner possesses the Creation Matrix and starts to investigate how might have it now.

Shockwave’s investigation starts with Rumble. By reviewing his memory banks he is able to learn that it was Buster who slipped past the Deceptions and most likely has the Creation Matrix.

Thanks to events in the last issue the Autobots are able to listen in on Shockwave’s discovery. Bluestreak and Bumblebee roll out to find Buster and protect him from the Decepticons. The two Autobots head to Sparkplug’s Garage and tell the boy’s father that his son is in danger. Sparkplug, however wants nothing to do with the robots because they always put him and his son in danger. He refuses to help them, but worried about his son, Sparkplug gets in his car and goes off to find him. Bluestreak and Bumblebee follow. 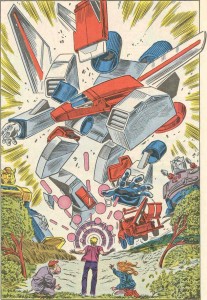 Jetfire is able to fight off the Autobots, but Bumblebee realizes that the Decepticon is not alive and tells Buster to control the jet. In doing so this reveals his secret to his father and Jessie. Buster disassembled Jetfire with a single thought.

With Buster’s powers out in the open and his father’s acceptance, Bumblebee and and Buster start thinking of ways to rescue Optimus Prime with Jetfire.

An Autobot convoy on the way to the Decepticon base over hear Shockwave through the hacked telephone system declare his intentions to terminate the Autobot leader, Optimus Prime.

No letters this issue.