With issue 66 we have reached the end of the Matrix Quest. And what an ending it is. Fighting, bickering, The Matrix, Thunderwing! I can’t wait to share my thoughts about this issue with you, but first let us check out this cover! 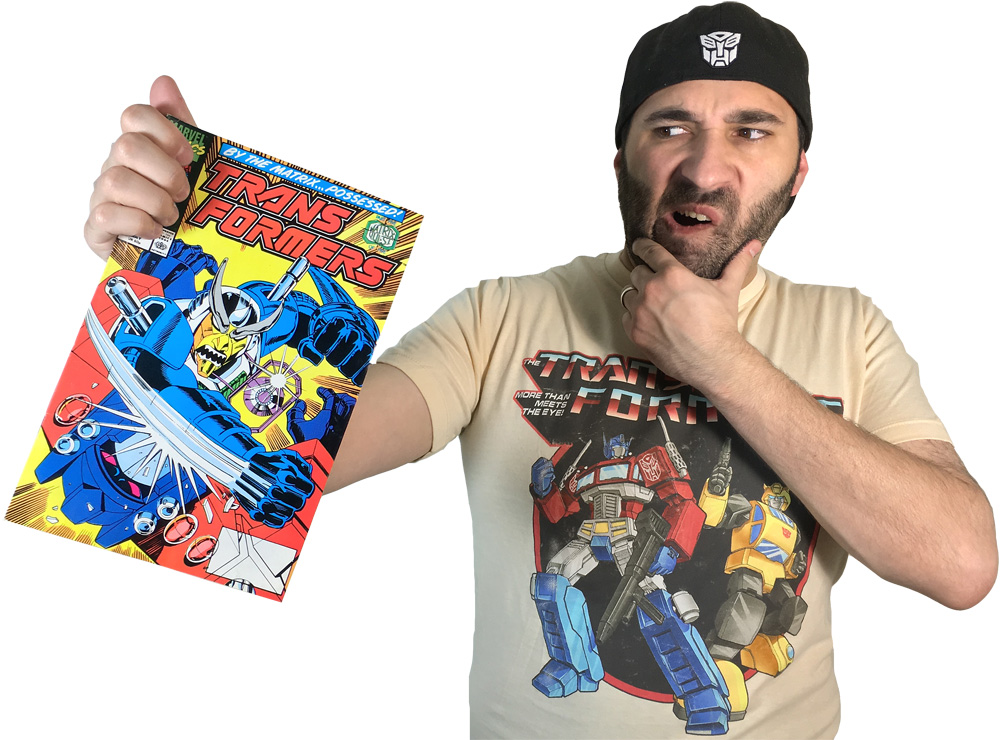 Killer Transformers T-Shirts Can Be Found At 80sTees.com!

Here we have a yellow (grumble), cover depicting Thundering punching out Optimus Prime. “By The Matrix… Possessed!” is written above the Transformers logo. Nothing about the cover is really amazing. I think the color choices might have made it stand out on the news stands, but other than that, it’s just Powermaster Prime (who I don’t care about anyway), getting decked by a recently introduced bad guy with the Matrix. I’ve been staring at this thing for to long and now stuff is starting to look out of proportion. So lets get into the review before I totally hate this cover. 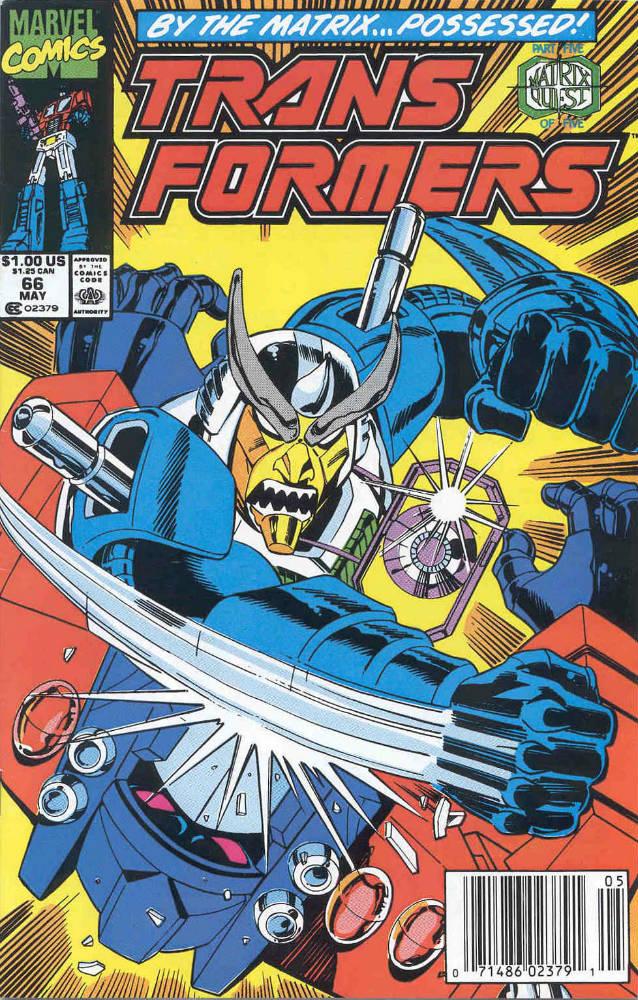 Our story opens up with Unicron eating the planet Ghennix on his way to Cybertron. Then he pauses for a moment to create three henchmen called Hook, Line, and Sinker. Because Unicron is unable to teleport himself to Cybertron he has his new recruits sent. 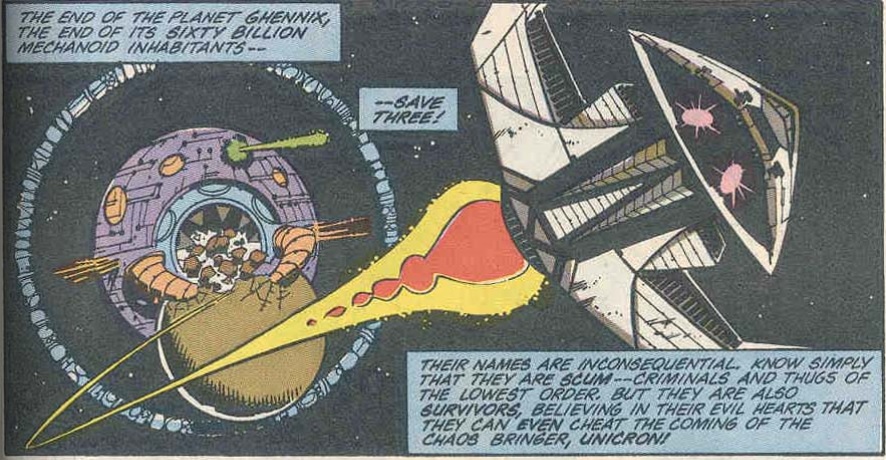 In a classic evil doer trope, Thunderwing recounts the last issue as well as let Prime in on his master plan before killing him. During this time, Highbrow and Brainstorm sneak off a few shots and the Matrix reacts in a way to protect its host, Thunderwing.

Nightbeat and the other captured Autobots and managed to sneak aboard with Thunderwing. Aware of his plan, they just now have to find away to stop it.

This issue also cuts to it’s own Interlude back on Earth. The figure I believe to be Shockwave, observes Starscream sneaking off into the night near Scorponok’s base.

Now on the Ark, Thunderwing has been completely possessed by the Matrix. Optimus Prime tries to talk some sense into Thunderwing. To get him to fight the Matrix’s influence over him to no avail. It’s only when Spinster tries to say the same thing to him that Prime did does Thunderwing start to snap out of it.

Now Nightbeat has a plan to eject Thunderwing out the bay doors and it works. With the end of the long battle the remaining Decepticons no longer wish to fight. The Autobots take their new prisoners and mourn the loss of the Matrix. 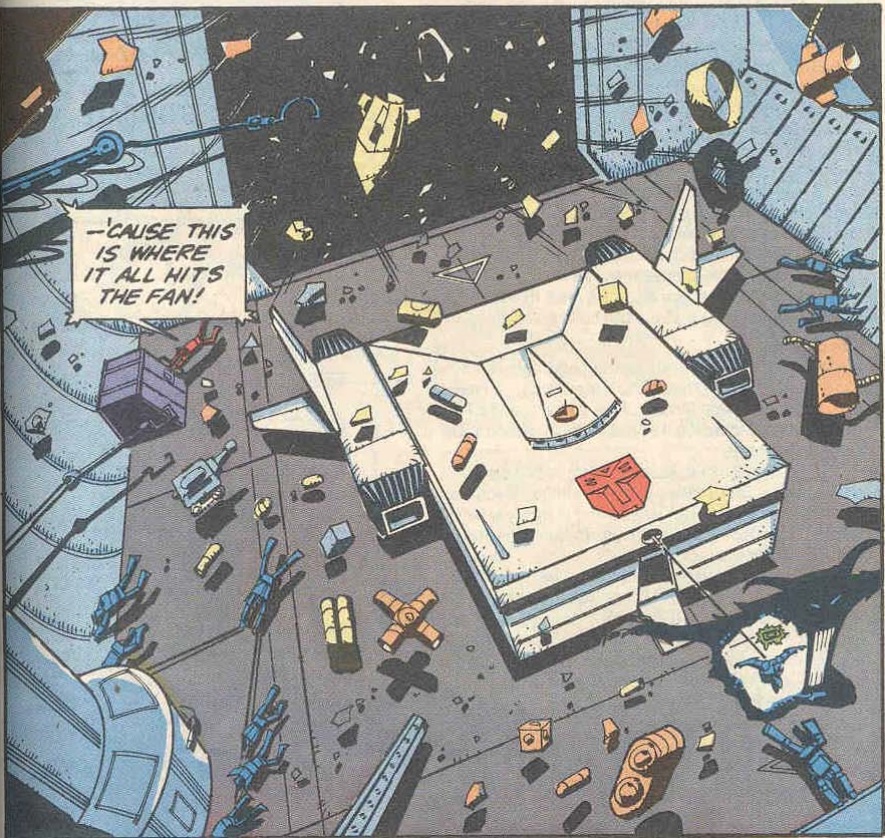 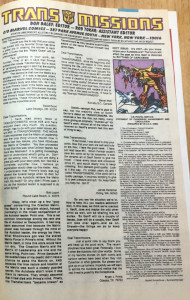 I would just like to say that your comic has turned into my favorite! Simon has done a great job in relating the stories to each other. It looks like the “Matrix Quest” will be phenomenal!
Two glitches in your work, Mr. Furman. First of all, it says that Primus dubbed the robots Transformers. But in issue #1 (a looong time ago) it said that the warring factions became known as Transformers!
The second is that now the Matrix is a tangible object! If it was a tangible object, Shockwave would have simply extracted it from Prime’s body and killed him. As it was, he took Prime’s head. If the Matrix was still in Prime’s chest, how did Shockwave manage to create all those new Decepticons? He only had Prime’s head hooked up to his handy little machine. These minuscule details aside, keep up the incredible work!

I have read every issue of TRANSFORMERS since #38 and have enjoyed them very much. My question, thought, has to do with your latest issue #61 and #62. In TRANSFORMERS: THE MOVIE it was explained that the Matrix of Leadership was the only thing Unicron feared. Now, in these last two issues, you have introduced the Matrix of Creation. You then proceeded to say that this was what Unicron feared. Are there two Matrixes? It is getting increasingly hard to understand what’s going on. Don’t get me wrong now, I think you are doing a great job with your story plots, but i feel like a complete outsider now. I believe an explanation would clear up this matter. Also, I understand that Prime’s body was put aboard the funeral barge when he died, but why didn’t the Autobots retrieve the Matrix from his body? Or why didn’t Prime pass it on, as the Autobot leader is supposed to do when dying?

Okay, lets clear up a few “gray areas” concerning the Creation Matrix. The Matrix is a tangible object, housed (normally) in the chest compartment of the Autobot leader. Point one: This is not common knowledge among the rank and file of Autobot or Decepticon. It had long been assumed that because the Matrix power was focused through the mind of the Autobot leader, the energy lay there. What Shockwave got was the stered Matrix Force in Prime’s mind. Without the Matrix itself, in time this store would have run dry. The Creation Matrix and the Matrix of Leadership are one and the same thing. Point two: Prime (because of the suddenness of his death) didn’t have a chance to pass the Matrix on. AND because the true nature and location of the Matrix wa such a closely guarded secret, the Autobots didn’t know it was there to remove. They simply assumed that it had died with Prime’s mind. Finally, the Transformers “became known” as Transformers as they became subliminally aware of the name Primus himself had given them.

I have been collecting TRANSFORMERS since the beginning and have never had any reason to think about dropping the title…until now! I have always liked the artwork, but to be frank (actually the name’s Steven) the art in issue #61 and #62 is not only bad-it’s lousy! Were you rushing to meet a deadline so you decided to buy time by cutting quality? Whatever the reason is, it’s an insult to your loyal fans, if not to all comic book collectors and readers of any or every title. If this trend continues, i’ll have to say “Bye-bye Transformers!”

Ooooh–savage! But, we’re glad to say, not the majority view of Geoff Senior’s debut on TRASNFORMERS. We received a few like this, but many, many more giving an emphatic “thumbs up” for Geoff’s work. Almost all of the letters we received on Geoff’s artwork had this sort of thing to say…

I’ll be honest, I was about to drop your comic. Now that your jaws are well and truly n the floor, I have the good news. I have just read issue #61. Simon Furman couldn’t save this comic all by his lonesome. It took the dynamic art of Geoff Senior to give me hope! I have every issue and crossover since #1, and would dearly love to keep collecting. But I demand good quality. Look at it this way. I’m sixteen years old and I collect TRANSFORMERS. If the comic isn’t a quality package, it becomes tempting to give in to peer pressure and quit. So, Keep Geoff, you keep me. Got it?

So you see the situation we’re in. How to keep ALL you readers satisfied? Well, in this case, we think we’ve cracked it. Geoff, Jose and maybe the odd other artist as well, will be sharing the art duties. So Geoff will do a couple of issues, Jose will do a couple, then Geoff will take over again…and so on. Sheesh-the things we do to keep everyone happy!

Just a quick note to say thank you and keep up the good work. The recent story lines have been great. Personally, I love it when the Autobots visit other worlds. Some of my favorite stories (in both comic and cartoon series) have been when they visit Cybertron or other galaxies. But please don’t give up on us humans. Hopefully we will learn to admire the Autobots and realize that the real threat is posed by the Decepticons.

So much to say about this issue. I would say the only thing that didn’t meet my expectation was Prime getting his old body back. Though, honestly, I can see there is still the opportunity for that.

The over all book and story arc were great. These where enjoyable reads and I really want to see where we go from here.

Prime was the best and worst versions of himself here. A bad ass thinking about others as well as a little bit of a whiny bot.

Its worth mentioning that Simon Furman is really doing a great job with incorporating aspects from the Transformers animated 86 movie as well as making the Transformers comic it’s own thing. You see the best examples of this in this story arc where Unicron is involved. Particularly making Unicron a god.

Geoff Senior is again the artist on this issue and he did a really good job. I’m also still seeing things that make me think Generation 2. Like the blocky Autobot space craft of Grimlock’s.

It was a fun ride. I love it. I didn’t feel this way about the Underbase Saga. What did you all think? How was the story arc for you? What do you remember as a kid reading these books?