The iPhone is easy to use. Which is really a good thing because it doesn’t come with a manual. No RTFM here. I think that says something about a product when you don’t need a manual to operate it. Using this phone and all the software it comes with has been very intuitive. Typing on this thing is very impressive. Mistakes are few and far between and the built in spell checker really dose a great job when I do make a typing mistake.

Battery life is not bad at all. My test for this was this last Labor Day weekend. I charged the iPhone Friday morning before I went to work and I did not charge it again till late Monday Night. So 3 days(ish). Again, I had 3G disabled, and I had WiFi disabled accepted when I actually needed access to the internet.

The phone is slippery. It really is. I don’t mean this so much when it is in your hand. The unit is very smooth. The lady at the AT&T store that I got the iPhone from really stressed to me that I should get a case for the iPhone because of this fact. She explained that I should get one to keep the phone from slipping out of the inside pocket of my jacket. She stressed this to an almost annoying degree and she was very shocked that I left the store with out purchasing any kind of a case at all. My logic at the time was that I have been caring an iPod Touch for almost a year now and I have not broken it yet.

I added some velcro in my inside jacket. Well, actually Hannah did at my request. This was a result of the paranoia that I started feeling after talking with the lady at the AT&T store. But it’s also one of those ideas I wish I had a long time ago. It really is smart and keeps stuff from falling out of my inside jacket pocket now.

Still no pause button. Apple still has not solved the ‘no pause’ button on the iPhone 3g when your listening to music. I honestly don’t know if they think it is a problem, but it is annoying to have to activate the the screen and then press the pause button to stop music.

I don’t use 3g because I live in Juneau. The city of Juneau Alaska as of yet, dose not have 3G cell access. So I have that feature on my iPhone turned off. As I have read that also help a lot of battery life on the phone. It’s easy enough to enable 3G if I was in a location that had it. Same with WiFi access.

GPS is pretty neat. I can open up google maps and in a few seconds it will figure out where I am standing. I can then easily get directions from where I am standing, to where I want to go. I have found that there are places in Juneau I can be that the GPS system can’t triangulate where I am but, I have seen dedicated GPS units struggle with that from time to time.

Setting Up Voice Mail did not go very soothly. As it was explained to me at the AT&T store, click on the voice mail icon and the phone would guide me through setting up my voice mail. Well that did not work. Clicking on the voice mail icon did nothing at all for me. After researching this on the Apple support page Ilearned that when this happens with new phones you have to call your own cell phone number and then you would be instructed on how to setup voice mail over the phone. Which I did do and it has worked just fine ever since. Having visual voice mail is a wonderful thing. 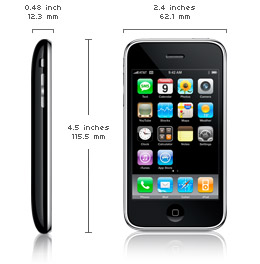 Holding the phone to my face feels weird. At least at first it did. The unit is so thin, but very sturdy. It’s just thinner then any phone I have ever had before that It took a couple of days to get used to it.

Pictures in address book help you quickly identify who is calling better then just a name flashing on the screen. This is really a great feature. It’s a small thing but it’s the detail to the small things that Apple really excels at. A person can recognize who is calling faster from a picture then from having to read a name. When someone calls in it fills up most of the screen.

Scratches and scuffs. None. This thing is pretty scratch resistent. I am impressed. Remember, I don’t have a case for my iPhone.

Screen Glare. It’s not been an issue for me. For the iPhone or the iTouch. I use the iTouch at the gym all the time with all their lights.

Things. This is an app I paid for and installed on my iPhone for my GTD needs. It works really well and syncs with my desktop client perfectly. I can’t say enough good things about this program.