I am always looking out for new ways to enhance my weekly Dungeons & Dragons game. Things that might help immerse the player and keep everyone excited. One thing people can do is buy miniature environments that player characters can use  to explore. The most popular of these are made by a company called Dwarven Forge. 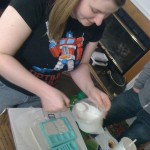 My Fiancé Testing Out The First Castelmolds

The Dwarven Forge sets are very well made and are pretty much the cream of the crop when it comes to miniature environments. They are a bit spendy and if you can afford them, then by all means knock yourself out. But I have been looking around the Internet for something in-between a battle mat and a Dwarven Forge set.

Personally I hate Dungeon Tiles. So they where not an option in my mind. I would rather just use graph paper if it came down to it.

What I have found is a product called Castlemolds from Hirst Arts.

When I found the Castlemolds sets on-line I showed them to my fiancé who immediately thought they where a good idea. As excited as I was to have found them, she is the one who really pushed me to order a few. 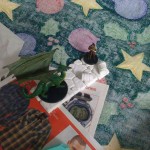 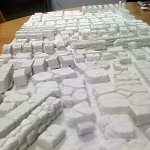 As the name implies Castlemolds are molds. They are made from silicone and according to their website they will last for years and hundreds of casts. I suggest reading the “How it works” page on the Hirst Arts website to get a sense of how much work and money is going to be required for building a miniature set. When you factor in the cost of the molds, Plaster of Paris, Paint, and time the whole project can become quite spendy and time consuming rather quickly. But in the end I find it still costs less then going out and getting a Dwarven Forge mini set. Your mileage may very 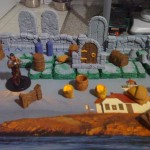 As soon as our first order of Castlemolds came in the mail my fiancé when right to work on creating the first set of molds, then another, then another, and so on and so forth. At one point she became quite the little multitasker, popping out hardened molds one moment and painting dried molds the next.

It took about three or four weeks of this before we had enough floors and walls made that we could use them for a full encounter. My fiancé even went as far as to glue felt under each of the completed Castelmolds peaces. She really did an amazing job with them. For the most part now she does the painting and I do the mold casting. 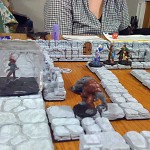 Before long we were ordering more molds and expand the look and the feel of the Dungeons we can create. There are still times when I will use my battle mat and wet erase markers to lay out an area of battle. But as much as I can I try to use the Castlemolds sets.