Issue 77 is here! The Transformers biggest concern is their ailing home world of Cybertron. Hi-Q still clams to be Optimus Prime, and what of the Neo-Knights. Lets find out. But first, what do you think of this cover? 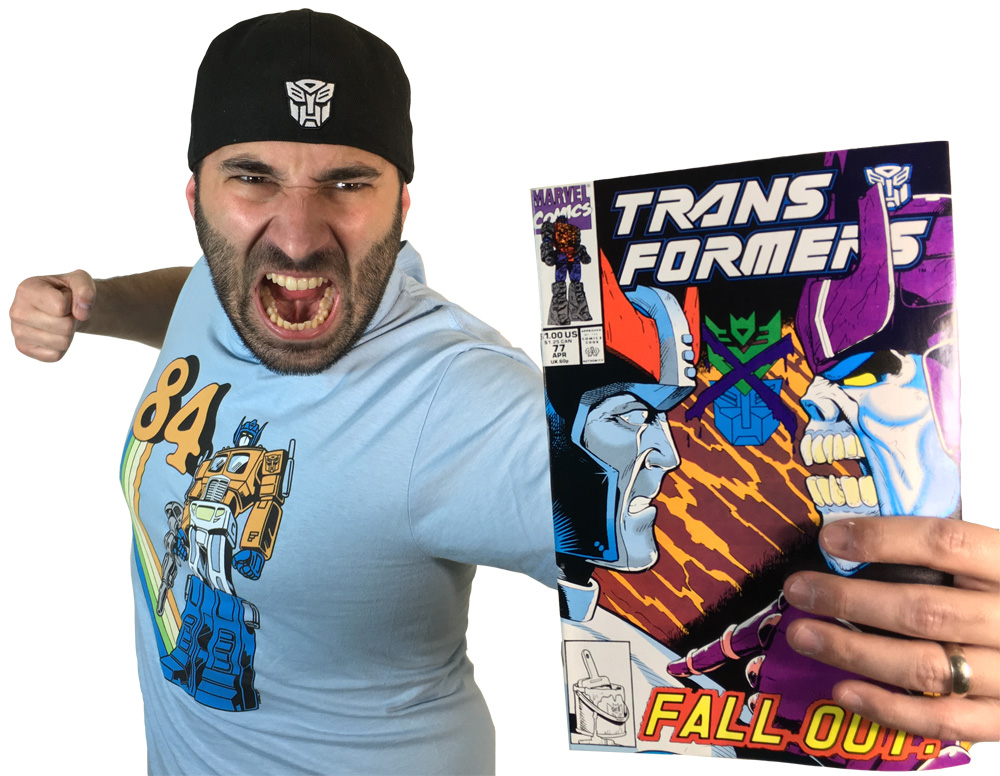 Issue 77 shows the combined Autobot and Decepticon Symbols with an ‘X’ pained across it. In front we have Prowl and Bludgeon, face to face looking none to happy with each other. They way Bludgeon’s helmet is weaved between the Transformers logo is pretty creative. Written at the bottom is “Fall Out!”. Is this a sign of the end of the alliance between to two robotic factions? Also of note is the image of Grimlock now adorned on the top left Marvel Comics box. 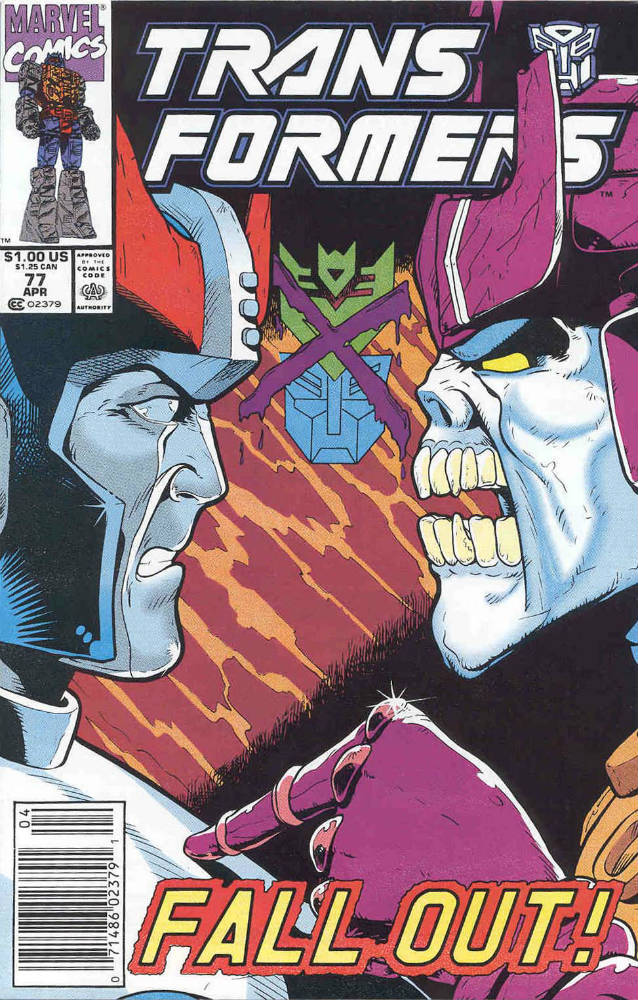 We open up see the state of Cybertron. The weather has gotten far less friendly than before. Inside a building we see that Prowl is fighting to maintain the new alliance between the two robotic factions. Prowl has pretty much become a dick here. Still resentful that he is not the leader but Grimlock, he tries to communicate with the mass of bots as if he were their leader. In this meeting Blaster unveils his findings that the planet is starting to tear itself apart. They have to leave Cybertron before they are destroyed with it. 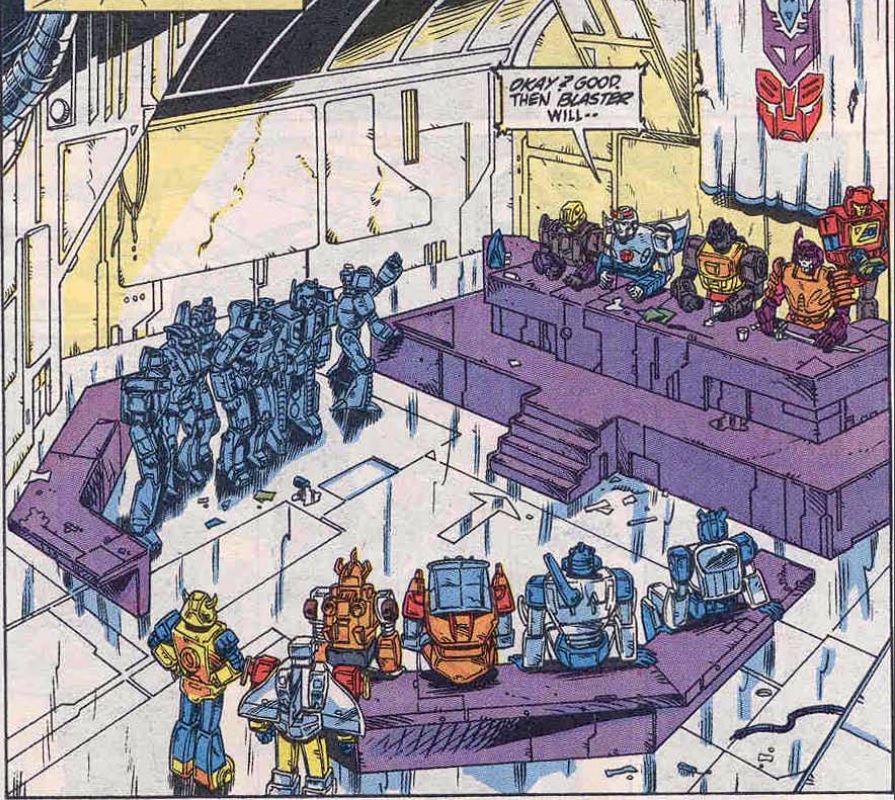 On the Ark, Shockwave and Starscream are ready to fly away. But they are unaware of the bot awakening from stasis.

Later, after the gathering, Prowl wants Grimlock to give a speech like Optimus Prime might have done. Grimlock wont be doing things like Prime did and walks off.

Next we are taken to a cell where the Neo-Knights are housed. The plan is that they will be taken back to earth in this container. Circuit Breaker is getting works and Hi-Q is still claiming to be Optimus Prime.

After the Decepticons have learned of the great plan to leave Cybertron, they put together and execute their own plan. They leave Cybertron and leave the Autobots to die on the planet without help.

Back on the Ark, Galavatron appears, having successfully hidden on board the spacecraft with out notice. He soon is confronted head on with his, (former self the right words for here?). 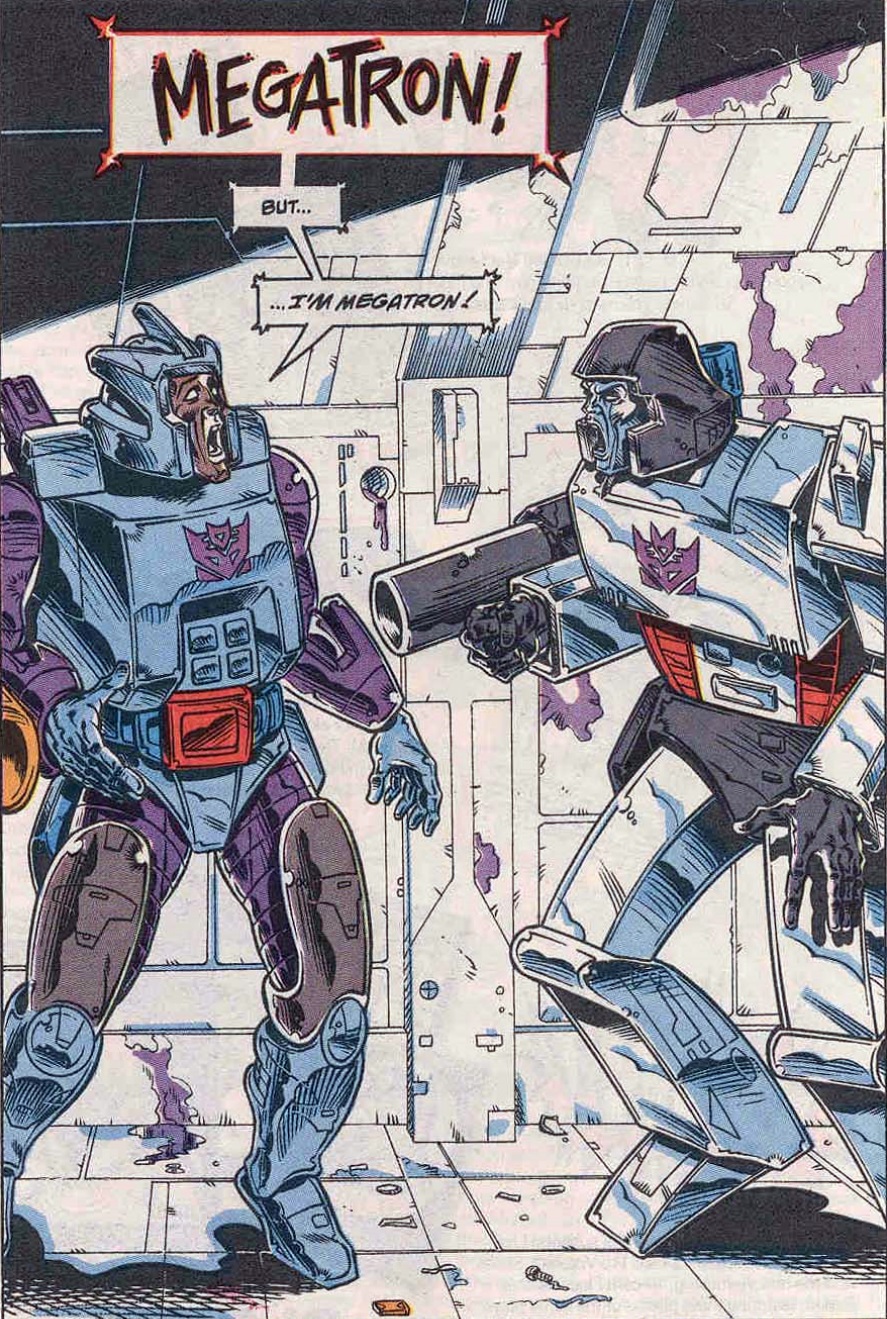 Dear Transmissions,
I have just finished issue #74 and now can’t wait for #75! Things, I can see, are going to get very ugly very fast. On the plus side, the Transformers are united under Prime and Scorponok, Primus is awake and Grimlock and company are bringing Nucleon to Cybertron. On the down side, Sludge and Slad are about to revive Megatron (my favorite Transformer), Prime keeps having what looks like heart attacks and, worst of all, Unicron rears his ugly head. Can it get any worse? I sure hope so! Hey, good job guys! The comic just keeps getting better and better. But best of all, Action Masters are coming! isn’t Nucleon wonderful? Everything is looking great!
Louis Pirozzi
Jersey City, NJ

Dear Transmissions,
I have been a tremendous fan of Transformers ever since they where first introduced about seven years ago, but after reading countless issues of the TRANSFORMERs comic in disgust, I just had to write. The artwork has gotten progressively worse. The stories have been okay, but the art is terrible because you are turning the Transformers into human beings. Here is a list of just a few of the problems i see. 1.) I don’t care what anyone says. Robots do not have teeth or eyeballs. Even the cartoon version got that right. 2.) Facial expressions are getting way out of hand. You’re giving robots cheekbones and round face features. Eliminate drooling, tears, etc. 3) There is a complete lack of detail in the drawings. Many issues appear to be rush jobs. 4.) In a fight, just use dents and scratches. Don’t make panels fall off so that wiring shows, because it simply does not look like what a robot of that complexity would consist of. The list goes on, but basically if the art remains the same, you may have one less reader of the title.
Roland Goyette
Moosup, CT

Ah well, never let it be said we don’t print negative mail. But, we’re happy to say that at present, this sort of letter presents very much the minority view. In fact, in a batch of about 200 or so letters, this was the only one that had more than minor quibbles (Action Masters Excepted) with the way things are going with the comic. And just for the record, Roland, we disagree with you too. Anyone out there agree with him?

Dear Transmissions,
While reading issue #74 I cam across something that I imagine was included as satire, and one bona fide mistake. Check page 4, upper left corner. Apeface is peeling a banana! This mistake is on page 11, panel 5. Sluge says, ‘you head the boss’ when it should plainly be ‘you heard the boss.’ Do I get a No-Prize?
Anthony Barbaria
San Jose, Ca

NONONONONO…No! How many times? You have to explain the ‘mistake away in a logical and believable fashion to qualify for a No-Prize. Like one reader suggested that because Sludge had only recently been revived, his speech circuits were still a bit rusty. Not quite No-Prize-Worthy, but heading in the right direction. This time , actually, we reckon it was…well, a mistake! as for the banana, he’s a crazy one, that Andy Wildman, isn’t he? By the way, great name! Maybe you and Andy should get together. Barbaria and Wildman sound almost like a comic, Doesn’t it?

Dear Transmissions,
How are you doing with the Transformer there oh well you please make these new 4 Transformers for the kids going to love them a lot plus I love your Transformers The one Transformer is Optimus Prime oh can you send me a list of names of the Transformers so i can show my friends if you send it well be happy i need to go now by from.
Roy Thedems
Hamilton, GA

But is it art?

Dear Transmissions,
Help! You are my last chance. I have written to Hasbro UK and even Hasbro USA, but they don’t seem to care. I’m talking about the Transformers I cannot obtain in the UK. Like a lot of readers over here, I collect Transformer toys, but can only get the main characters. Ones like Swoop (he’s my favorite), Perceptor, Sky Lynx, Shockwave, the Predacons (and Predaking), and Fortress Maximus. Can you ask the kids of America to help a British Transformers fan achieve his goal? I have different British Transformer things to trade. I have British TRANSFORMER comics (from issue 1 up to the current issue, #298), Transformer music cassette story tapes, all the British TRANSFORMERS Annuals, and all sorts of other stuff. If there’s someone out there who can help, please write to me at [Retracted by Youseph] I’m a Transformers nut, so I’d really appreciate any help you can give to help me complete my collection. Keep up the good work over there, this lad in the UK is right behind you!
Andrew Winn
Leeds, Yorkshire

A heartfelt plea if ever we’ve heard one. Well then, all you readers out there who’ve been writing in asking how to get hold of UK issues of the Transformers, now’s your chance! Why are you still here? Get writing!

Dear Transmissions,
I’m confused. In issue #73 all the Transformers were supposedly zapped to Cybertron by Primus. How come then, in issue #74, Grimlock and gang weren’t with the others. I love the ending to #74. All I can say is…it’s interesting
Jeff Wolf
AUrora, Co

Interesting?! Is that it? Interesting? Doesn’t it make you want to cry! What happened to stupendous, breathtaking, mind-boggling and the like? Sigh… As to your confusion (too right!), Primus brought to Cybertron all the Autobots from Earth, lacking the power (in his weakened state) to search for other randomly scattered groups like Grimlock and co.

Dear Transmissions,
I’be been stumped by something i think needs explaining. How is it possible for Megatron and Galvatron to be two separate people if they’re supposed to be one and the same? I’m sure a lot of readers woud like the Megatron/Galvatron thing to be resolved and explained. One request: Please bring back Thunderwing. He’s my favorite character and I think he’s made a great leader of the Decepticons. How about a profile on him?
Tommy Sims
Chattanooga, TN

That’s two requests. So, after confused of Aurora, we now have stumped of Chattanooga. Are we getting more obscure, or is-(just kidding!). We agree with you Tommy, you’re overdue and explanation/resolution(?!) to the Megatron/Galvatron question, and-bighearted fold that we are-we’re going to give you one. Check out issue #78 for a clash you just won’t believe! Thunderwing has come and gone again already. Blink and you would have missed him. Sorry.

Prowl is a dick. Now that that’s out of the way I can focus on the rest of the review.

Is it just me or did the pacing of this issue seem, I don’t know, off? But even so, I’m still interested. What will happen with Galvatron and Megatron? Are they the same? Or where they the same in Galvatron’s time line? What is Grimlock planning with the Dinobots? How did Bludgeon become accepted in a leadership role? Will Hi-Q get to whatever he is searching for? Just have to read the next issue and find out.

I have to add that in the TransMissions Letter section there is a letter from Roy Thedems. That letter and Marvel’s response, “But is it art?” had me in stitches.

What did all of you think of this issue? Did do you agree with me about the pacing?