Consistency. Good Consistency is what I can say about this issue. The last few issues and this one have all had the same writer and artist and I think that has helped a lot with keeping me interested in what is going to happen next. But before we get into what happens within the pages of issue 59, lets us scope out this Jose Delbo cover. 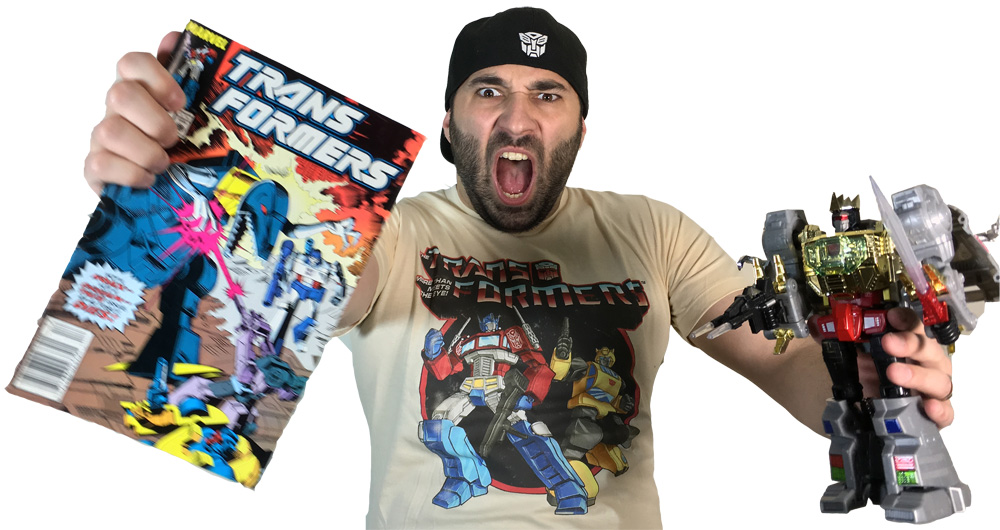 This cover uses layers in creating a 3D space very effectively. The background is teared in colored layers. That, along with the background colors used for an explosion add to the effect. Grimlock is depicted going after the Sports car patrol. (Though it’s hard to see the Sports Car patrol. It looks more like a random laser mounting.) At the same time Grimlock is taking on fire. In the background Megatron steps forward in what I find to be one of the better renders Delbo has done of Megatron thus far. The whole cover feels like it is a live with movement and your eye tries to take in everything going on here. Written near the bottom, “Not a HOAX–not a DREAM– THIS issue, an Autobot DIES!” I found this to be underplayed in the story. Do you agree? 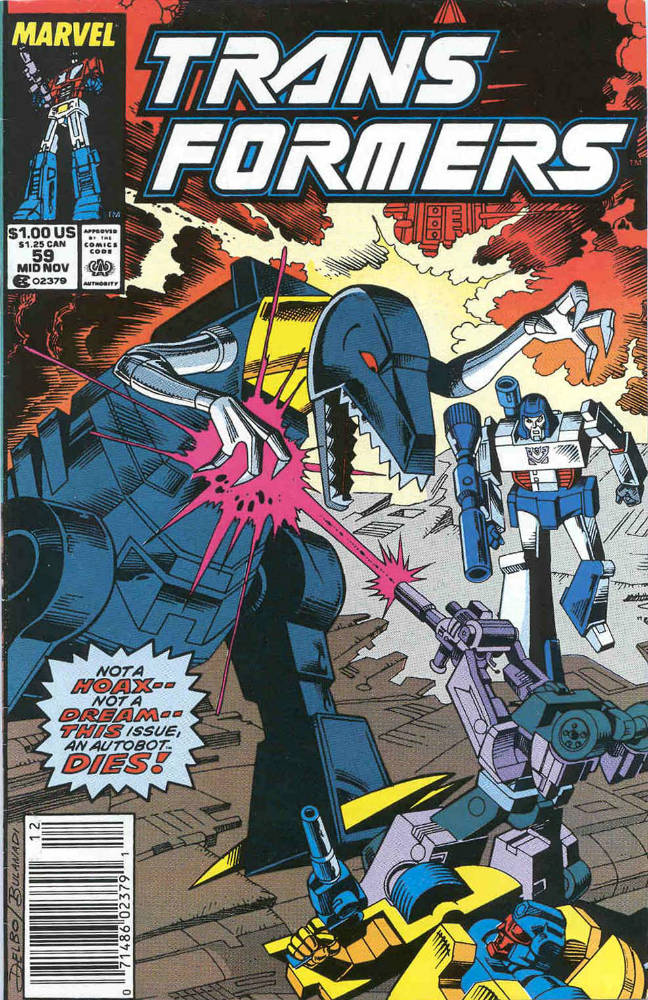 We flip open this floppy to find that the ferocious Grimlock has gone right to work on Megatron. Thought it appears that because Grimlock is still in mid recoup mode, Megatron is able to get the upper hand on him. Megatron is amused by Ratchet’s attempt to over take him. It is then that Ratchet shows his hand to Megatron. Starscream isn’t quite the mindless zombie he had hopped for. This puts Megatron’s plans in jeopardy. 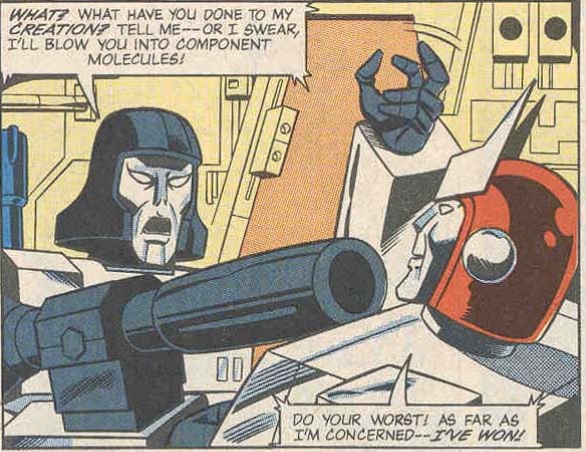 Megatron, who would like to find out what ratchet has done, is interrupted by the return of BumbleBee (YES BUMBLEBEE! Thank you Simon Furman!). He fires at Megatron. Ratchet tends to the issues concerning the Ark and the explosives on board.

On Earth, Starscream has started to battle Scorponok’s boys, all the while spouting he is doing this for Megatron. Optimus Prime just starts to mentally put things together when Starscream sends his Pretender shell to battle the Autobot leader. Choosing to work with the Autobots, Lord Zarak sends his Decepticons to help Optimus Prime. 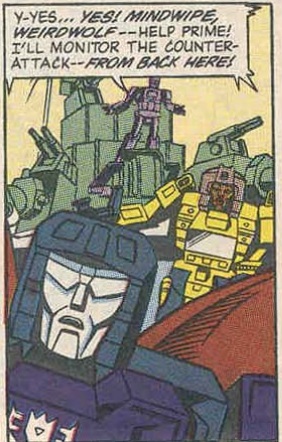 At this point the Autobot Shuttle has rendezvous with the Ark and now even more Autobots are endangered of die as no one is able to disarm the ticking time bomb on board. Kup is giving it a good old college try though. 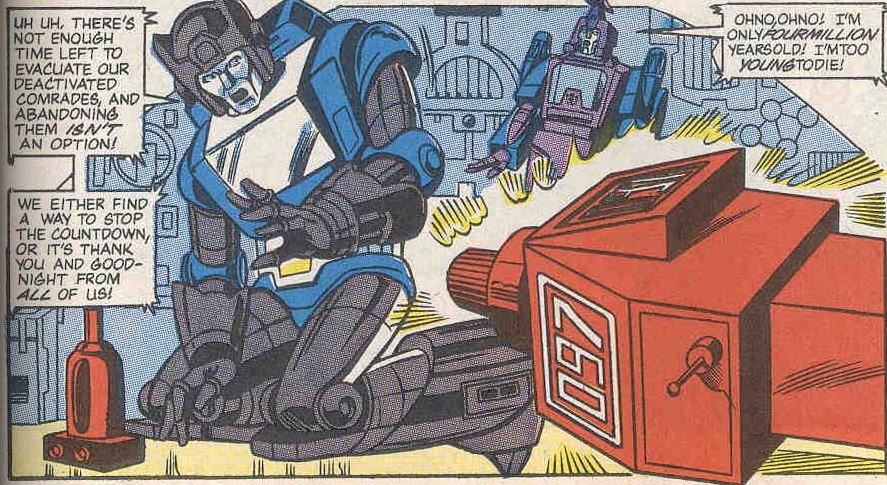 Back on Cybertron, Decepticon leader, Megatron has managed to toss out all the autobots from his fortress. He orders his Powermasters and Micromasters to go finish the job while he hunts down Ratchet. Ratchet, is trying desperately to make contact with the Ark and warn them.

Starscream has the upper hand on Earth now that disable almost all of the reexamination Transformers. Optimus Prime and Zarak still are operational. Rot Rod pulls himself together long enough to blast Starscream’s Pretender Shell that is so powerful, Starscream himself feels the pain. Zarak joins in on the attach that results in Starscream’s personality returning. This was Ratchet’s plan and hope. Back to his cowardly self, Starscream begs for mercy. 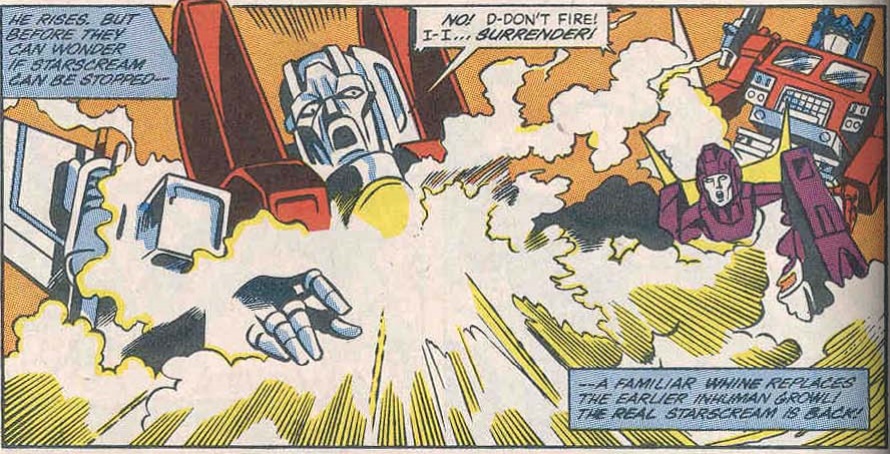 in his Cybertron base, Megatron catches up with Ratchet who is messing with the trans-time dimensional portal. Megatron thinks Ratchet is trying to escape, but he soon realizes that Ratchet is trying to bring the explosives on the Ark to his base. Megatron tries to escape through the portal but Ratchet tackles him. Outside the base the Autobots and Decepticons pause to watch as the entire base blows up with Ratchet and Megatron inside. 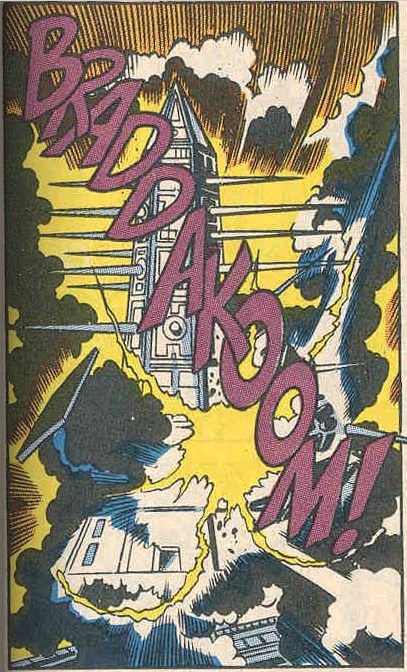 Simon Furman, Thank you so much for bringing back Bumblebee! And why not. The G.I. Joe crossover that resulted in Bumbleebee being rebuilt as Goldbug wasn’t accepted as cannon in the G.I. Joe universe. So why should we have to hang on to Goldbug? Welcome back old friend.

A lot going on in this issue. A lot I didn’t talk about because I want readers to enjoy reading these books without knowing everything that’s going to happen next. A lot happened and it was an enjoyable story. I do feel like the opening, “Not a HOAX–not a DREAM– THIS issue, an Autobot DIES!” is miss leading. I wont know for sure until the next issue which I’m ready to dive into once this post is completed.

I also enjoy when two warring parties, in this case Optimus Prime and Zarak, team up to do good. It was a nice change from normal suspense these covers imply that someone may die or be really badly hurt.

How do you all feel about this issue? How do you feel about the return of Bumblebee? I can’t imagine anyone being upset by it, but lets discus your thoughts in the comments below.