Issue 57th of Marvel’s Transformers Picks up where 56 left off. A continuation of our new writer, Simon Furman. Does Simon continue his strong start? Is Ratchet able to square off with Megatron? Will find out soon enough. But first, lets take a look at the cover. 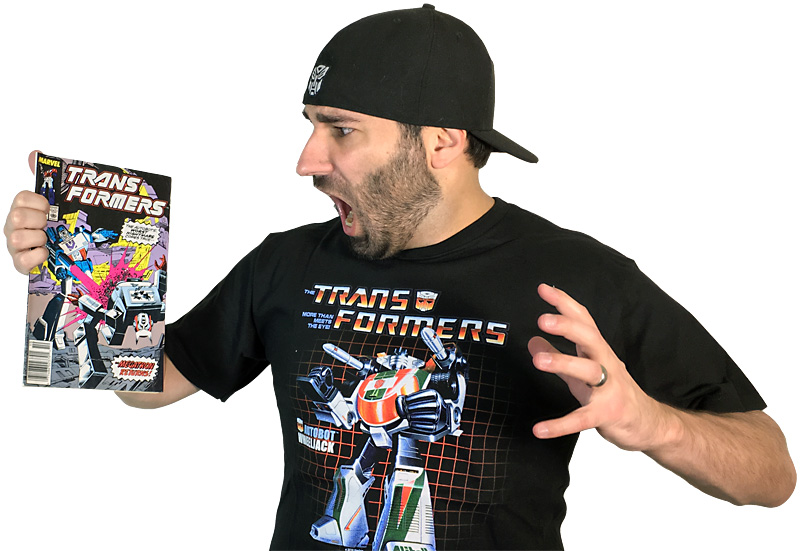 This Jose Delbo cover for issue 57 depicts Megatron blasting Ratchet with his fusion cannon. The blast exposes Ratchet’s now damaged and sparking innards. The background on the cover appears to show Cybertron, albeit rundown and dilapidated. Cover reads, “The Autobots’ worst nightmare comes true— Megatron” implying that Megatron has truly returned in this issue. The cover is not bad looking. If you’re looking for something to bitch about you could say that Megatron is bent at the waist oddly. It’s almost silly at this point to mention that the cover doesn’t truly reflect the contents of the book. 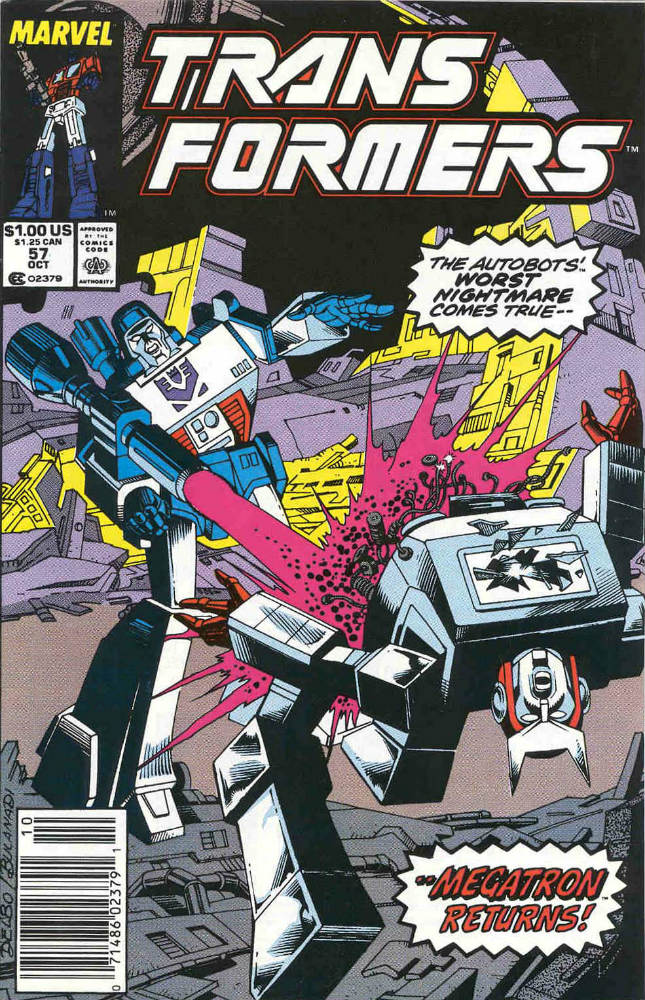 We start off with Ratchet coming to grips that Megatron is in fact back from the dead. We don’t learn right away how that happened. Rather, Megatron brings Ratchet update on his current plans by showing off new super pretender armor that he has made. 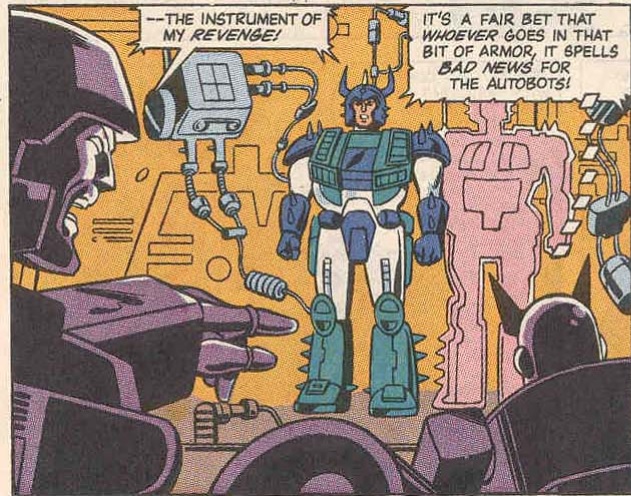 Next, we cut to Optimus Prime on earth who is confronting the Air Strike Patrol when Prime receives a communication from Ratchet. Before much can be said the radio is blown up by Storm Cloud. Optimus deduces that something is up and fights his way to Storm Cloud who can’t keep his mouth shut. Optimus Prime figures that he was lured away from Ratchet on the ark on purpose. 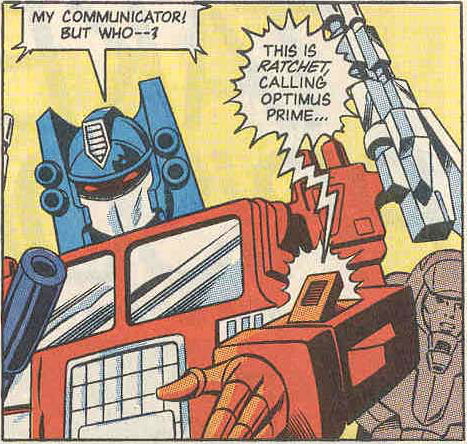 Optimus Prime is not give two seconds to think about things before Scorponok arrives on the scene. His arrival is the direct result of the Air Strike Patrol having earlier allined with Megatron who had them contact Scorponok in his plan to delay Prime from figuring out the Decepticon plan.

Magatron proceeds to explain his master plan to Ratchet. This is done because Megatron needs Ratchet’s particular set of skills to help him with the super Pretender. Ratchet, of course says he wont help which causes Megatron to contact Blackjack aboard the Autobot Ark who is awaiting Megatrons comment to destroy the space ship. 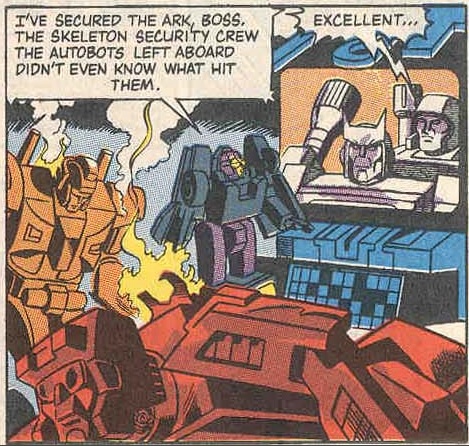 As Ratchet is absorbing the pickle he is currently in, Megatron tells Ratchet how he came to survive the detonation of the Space Bridge. back in issue 25. At the end of his story, Megatron takes Ratchet to meet his Pretender patient. Ratchet realizes that Megatron only plans to use one of the pretender shells and he starts to form a plan.

On Earth, Scorponok and Optimus Prime begin to square off. By now Prime is very aware that he was lead away from the ark. The Air Stroke patrol leave as the battle starts. Prime does soon stop after realizing his actions are putting Humans in danger. 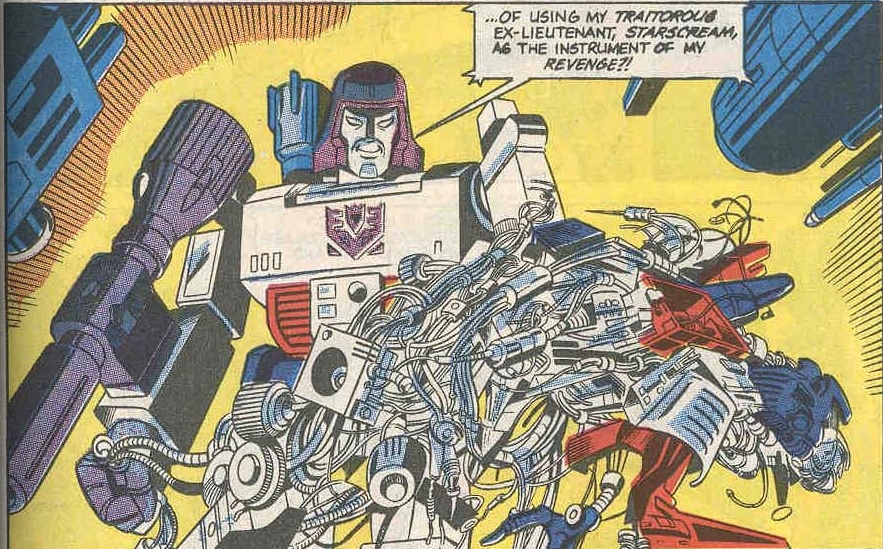 On Cybertron, Ratchet is finally comes face to face with his patient, Starscream, and he can’t believe it. Megatron whats Ratchet to fix up Starscream to be his lackey.

This is a solid and meaty story. Not quite as good as the last issue, but still, better than the the last few. I honestly just want to start reading the next issue to find out what happens next. I guess that is the sign of a good comic. Wanting to get to the next issue as quickly as possible.

I enjoyed the art. I know a lot of people don’t care for Jose Delbo’s art, but I like it. I’ve been on a bit of a Delbo kick lately too.

What are you’re thoughts on this issue. Lets talk about it below. Also, are you all Delbo fans like myself? 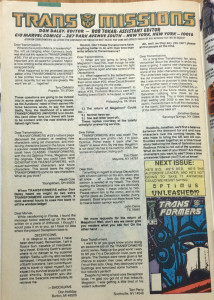 Dear TransMissions,
Where’s the Autobot Matrix of leadership? You let us hanging when Optimus’s body was shot out into space (in TRANSFORMERS #26). For all anyone knows, the once all-important and all-powerful Creation Matrix is now orbiting some obscure planet in Op’s scrapped body.
What happened to the promised second edition of the TRANSFORMERS UNIVERSE? A few profiles have been appearing in the comic recently, but we fans are greedy. We want ’em all…together!
Tony Dematio – Franklin, Tn

These questions are going to be looked into in some detail in upcoming issues, as the Autobots’ need of their sacred life force becomes acute, to say the least. Sadly, Tony, the likelihood of a second TRANSFORMERS UNIVERSE is in doubt. You ( and other fans out there) will have to be content with the new entries published right here.

When TRANSFORMERS editor Don Daley heard we might do two extra TRANSFORMERS comics per month, it took several hours to coax him back in off the window Ledge!

While vacationing in Florida, I found the message below washed up on the show, written on a piece of driftwood. I thought I would pass it on to you, as I have no idea where the present Decepticon base is.

It is illogical to assume I have been destroyed. Remember, I am a Space Gun, capable of interplanetary travel. Entering Earth’s atmosphere is no danger to my superior design. Sadly, with my retro rockets damaged, I impacted hard into one of Earth’s oceans. I am currently unable to travel or repair myself, but I expect my survival program will engage shortly. Suggest you dispatch the Seacons immediately to retrieve me

Hmmm. Don’t these Transformers have anything better to do with their time than write letters to Transmissions?

Dear Transmissions,
1.) When are you going to bring back Megatron? I liked him, event through he was a creep. It would be good to have him fight Optimus Prime again and take control of the Decepticons.
2.) What happened to the Battlechargers, Runabout and Runamuck? I haven’t seen them since issue #23, when Circuit Breaker sent them plunging into the water.
3.) What happened to Shockwave? In issue #39, fortress Maximus sent him hurtling toward Earth. Is he dead, or what?
James Rose – Philadelphia PA

1.) The return of Megatron? Could be…
2.) Neither have we.
3.) See last letter (sort of).
These replies courtesy of the totally unhelpful answering service.

Dear Fellas,
TRANSFORMERS #54 was Swell! The Micromasters are pretty rad. I’m glad Optimus Prime made it back after his “Death” in issue #24. By the way, Megatron is not dead! He has to be back for 2005. Bet ‘Ya he’s on Cybertron, hiding out!
Eric Olsen – Mayville, NY

Dear Don,
I’m writing in regard to a large Decepticon with a fusion cannon on his arm. whom you all know… uh.. love (by the way, that cannon is leveled at my head!). The idiots leading the Deceticons now are obviously superior… oops I mean inferior to him. Please return him to the comic, and to his rightful place as Decepticon leader (hurry, please!). Does anyone out there know how to treat a fusion cannon wound?!
John Davis – Texas

Yet more requests for the return of Megatron! Well, don’t say we never give you readers what you ask for! on the other hand…

Dear Transformers,
I want to let you guys know your doing an awesome job on the TRANSFORMERS comic series. Keep up the great work! I wanna tell you I’m a Decepticon lover, pure and simple. The Deceps were never given a fair chance to explain their case, which is why I’m on their side. Okay, they destroyed a few buildings and terrorized some humans… but nobody’s perfect!
Despite my being a hard-core Decepticon lover, I’m glad you got rid of that imbecile, Megatron. I was getting a little tired of his violent outbursts!
Tom Perry – Scottsville, NY

Ah, well, as they say, you can’t please all of the people all the time.

Dear Transmissions,
I’m a long-time Transformers fan who’s concerned about the direction in which the book is going. It seems new characters are being introduced every issue! How about some of the older characters coming back? The Underbase saga was very good, but all the old characters were Killed! This seems like it was done on purpose to clear the way for yet another batch of new characters.
The Marvel UK TRANSFORMERS involves many of the future robots, such as Galvatron – utilizing time travel as the means to do this. This is more interesting than waiting until 2005 to see him in the comic. I know it’s hard to fit all the characters in the comic, but how about phasing some of the older ones back in?
Jonathan Bashar – Saratoga Springs, NY

Hopefully, Jonathan, we’ll find a balance between the demand for old and new characters over the coming issues. We also hope to bring the UK and US continuities closer together, so a time travel story featuring the likes of Galvatron and Rodimus Prime is not out of the question. What do the rest of you think? are these characters you want to see? Does a time crossover interest you?! Let us know!