Welcome to issue 47 and the start of the Underbase Saga! I have no idea what to expect here, but I am hopeful as the last issue has a decent story. So lets get right to it and check out this cover art. Which, even though it is pretty awesome, I am worried as the Transformer on display is new. 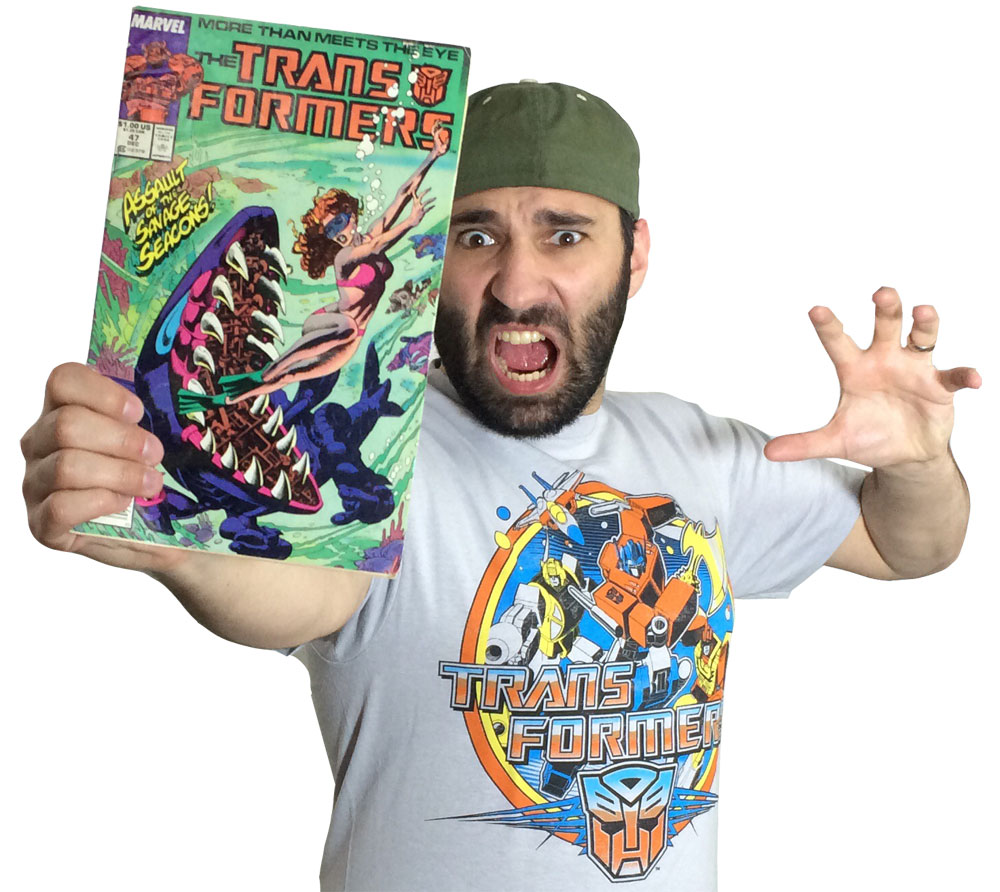 Autobots At The Ready With This Great T-Shirt From 80sTees.com

The cover shows of a wonderfully rendered Jesse swimming away from a Seacon, Overbite. Overbite is displaying not only his sharp teeth, but also the mechanical workings inside of his large mouth. The green color of the water in the background helps our lovingly rendered Jesse pop from the page. To a slightly lesser extent the same pop is happening with Overbite. Over all we have an exciting cover here that loses some energy by not having a Transformer anyone is really familiar with. 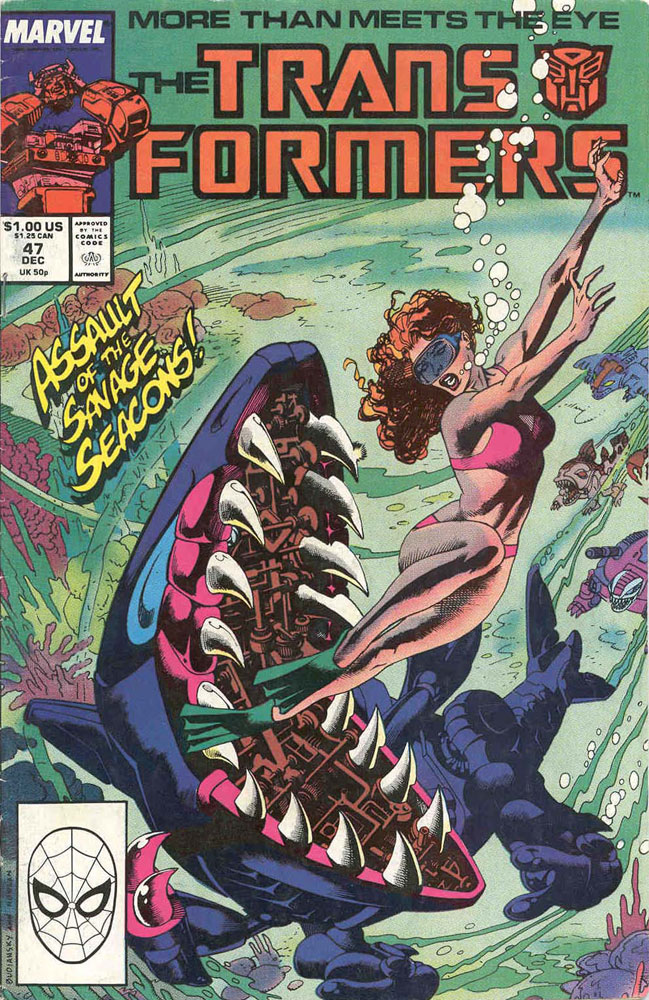 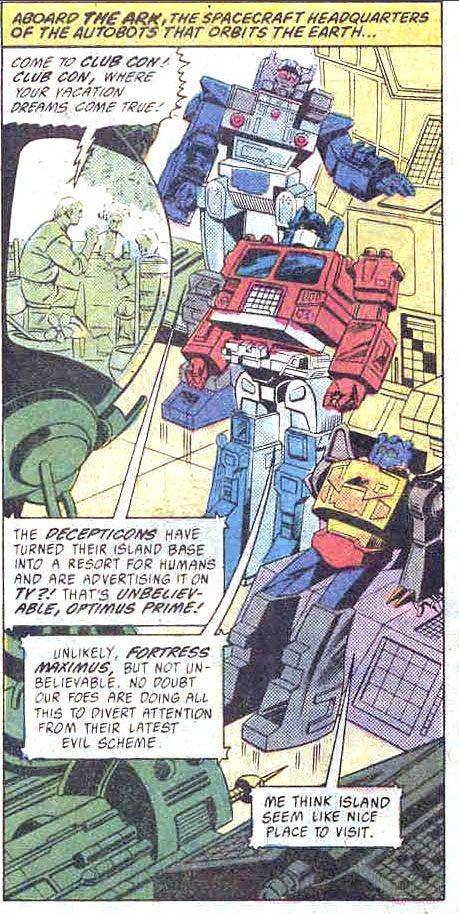 Advancing a little bit to Portland, Oregon where Sparkplug Witwicky is working on Jesse’s car. Sparkplug is worried about his son, buster who has been missing for some time now.  Blaster, who continues to be the same badass he always has been, arrives and shares his Autobot plan to sneak into Club Con. But he needs help from A human to get him inside. After a short argument between Jesse and Sparkplug, Jesse ends up taking blaster to the resort for his mission. 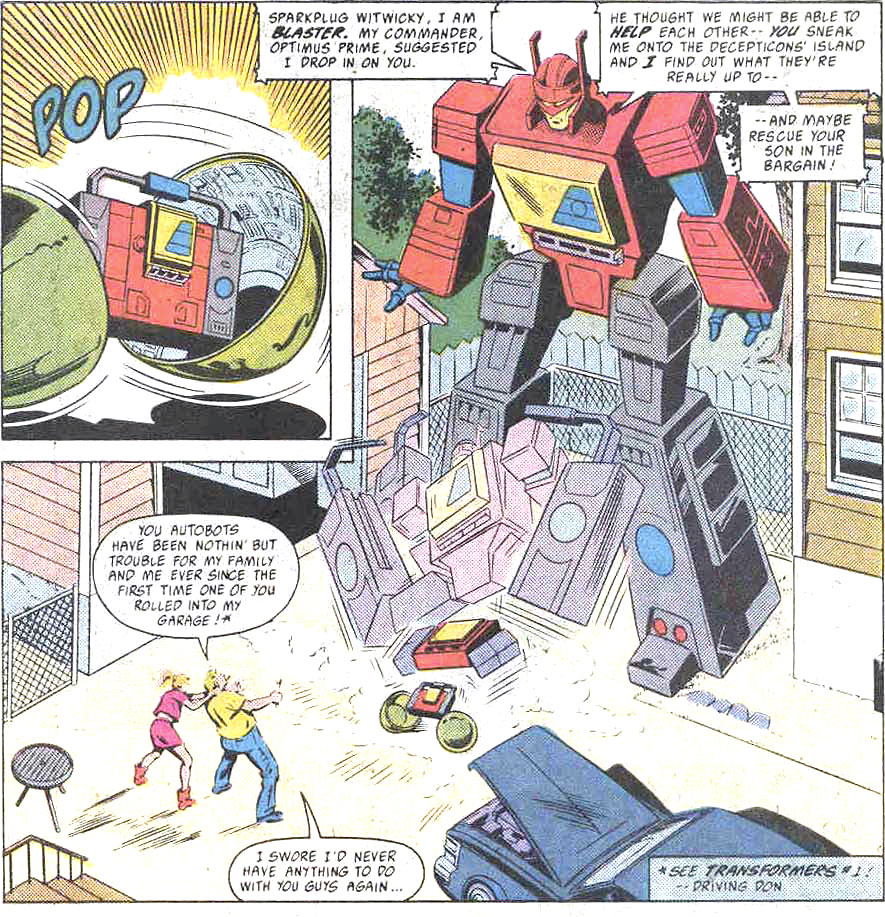 Inside the Decepticon tower that resides just below the surface of Club Con, Ratbat awaits the findings of the latest Decepticon mission that was issued to him from High Command on Cybertron.

Jesse and Blaster, in his boombox alt mode, arrive at Club Con and are greeted by Starscream. Once on the beach, Jesse takes off for the ocean water leaving Blaster to do his surveillance work. Jesse swims beyond the safety buoys and runs into some Seacons. She secretly watches as they enter the tower underneath the island result. Jesse returns to the beach to get Blaster and show him her findings.

Inside the Decepticon fortress, Jesse discovers a human sized door and enters it believing it might be where Buster is. Jesse’s hunch was right and the two are reunited. Buster tells to both Jesse and Blaster what he has overheard from the Decepitcons regarding their plan.  Several hundred years ago, the Autobots of Cybertron sent two mini cassettes to Earth with valuable encoded information. However, the space craft the cassettes where in became damaged before landing and the two cassettes ended up inside of a pirate’s treasure chest. The pirate ship the test was on ended up sinking in the middle of the open ocean. Ratbat was ordered by the Deceptocons of Cybertron to retrieve these cassettes believing that the information within them is highly valuable. Club Con was just setup to provide cover for the Decepticon salvage operation. 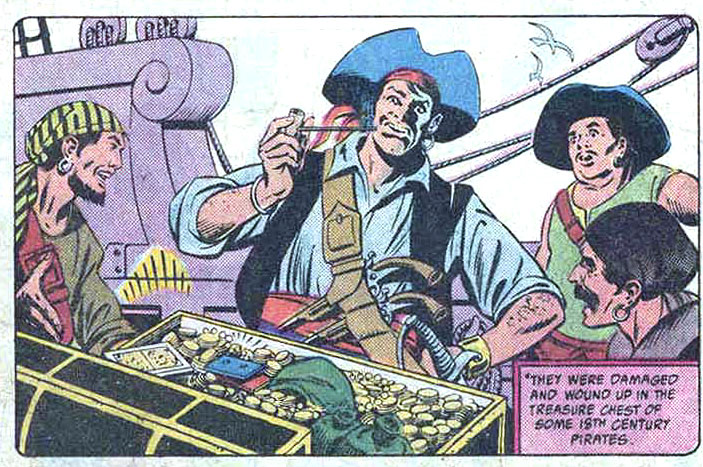 The group realizes that they can’t free Buster without reveling  themselves. Blaster promises to return when he can. Leaving the fortress, Blaster and Jesse spot the Seacons returning from a successful operation with a treasure chest in their possession. Against Blasters advice Jesse sneaks her way close enough to swipe the cassettes from the Deceptocons. When they finally notice the tapes are missing, Ratbat discovers human footprints on the ground and sends the Seacons out to find the thieves. 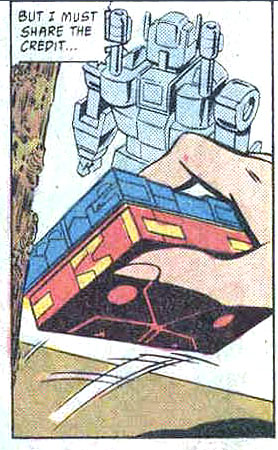 Back on the beach, Jesse wants to leave Club Con as soon as possible, but the Seacons emerge from the ocean and begin attacking the crowd to find the missing cassettes. Blaster transformers into bot mode to protect the humans. With six against one, it’s not a fare fight. Blaster spits the tapes back into the ocean, distracting the Seacons, he is able to take his alt mode shape and hide. Jesse and Blaster leave, promising to return for Buster. Blaster is aware of the information on the cassettes as well. So, he is not leaving completely empty handed. 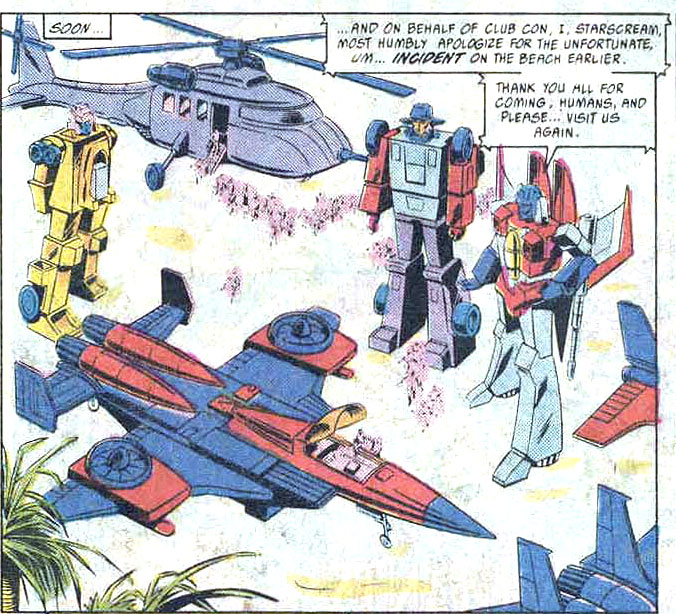 I’m going to say it again. It’s a beautiful cover. I just wish I cared about the bot on it. That’s the only thing I think that is hurting an otherwise really nice cover peace.

Optimus Prime is in this issue if only for a few panels and I was immediately disappointed to see him in his Powermaster form. How can Marvel, Hasrbo and everyone else how is being paid to make these kind of decisions for the story be so off base with their readers?

Blaster is still a bad ass. There is a part in the comic where he is sparing off with several Autobots in a danger room like environment. I went from Disappointment, after seeing Optimus Prime, to over joyed in seeing someone in the comic act and talk how I expect him to. It really made up for a lot.

It’s a solid story with Jesse being quite a heroine this issue. It brought a smile to my face to see a her kicking ass and taking charge to get shit done. Good on her.