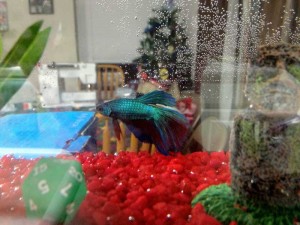 For Valentines Day this year my wife got me a beautiful blue and purple male Betta fish that we have named Betta Max. (Hey I’m a geek. Can you tell?) I have been talking about getting a Betta for months now, but I never went through with it because I just could not decide on a tank for one. That did not stop me from doing research for one online to learn more about care and feeding for a Betta. The one Hannah picked out for me is a Delta Tail Male Betta fish. I had to look up what kind of Betta that was.

Betta Delta Tail- Male Also known as Siamese Fighting Fish, Combattant (Canada), Trey kroem phloek (Cambodia), or C lia thia (Vietnam). The Male Betta is well known for its jewel-bright colors and spectacular finnage. Unlike most fish, they breathe from the water’s surface with their labyrinth organ instead of through their gills. Delta Tails have a distinctly triangular-shaped tail with crisp edges and sharp angles. The tail of a Delta is symmetrical, and although the angle is generally wide they are generally 130ø or less in tail span. Anything more than 130ø but less than 170ø is considered a Super Delta Tail Betta. Bettas will “flare” their fins when disturbed or threatened. The male Betta will attack another Betta and have been known to attack similar-looking fish. It is recommended that only one male Betta is housed in an aquarium with plants and very little current. 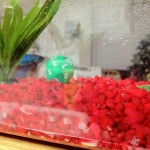 Hannah really could not have picked out a better gift.

Together the two of us went to the local pet store where I picked out a tank and Hannah picked out some red Gravel, a plant, and an Easter Island looking statue.

Today I added a d20 to the tank. Hannah says I am projecting on Betta Max. I just feel like he wants to be able to play games from his tank. Who am I to stop him?